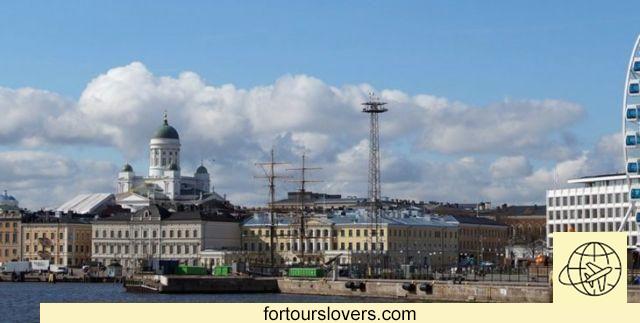 The main advantage of Helsinki lies in the ability to deliver cultural stimuli in abundance as only a big city (more than 50 museums), without ever being chaotic as befits a smaller reality. It is not the only paradox. There is also the double Russian-Swedish heritage: on the one hand the typically Russian monumentality; on the other hand, Swedish originality and inventiveness. A mix that makes Helsinki a unique city from an architectural point of view, profoundly different from other Northern European capitals. Fun is also a separate chapter: the inhabitants of Helsinki love to be outdoors, in this helped by mitigating force of the Baltic Sea which makes temperatures relatively less cold than inland. Below we see together the main attractions of the city. Happy reading.

Market Square is the obligatory starting point for discovering Helsinki. From Kauppatori, in fact, almost all the other points of interest of the Finnish capital are easily reachable, including - thanks to the proximity of the port - the surrounding towns. Therefore, a place that is both logistically important and touristically enjoyable. There are so many stalls that every day attract residents and visitors with their first fruits: fish, fruit and seasonal vegetables are never lacking, alongside the best of local craftsmanship between clothing and furnishing items. It's not over, because in Kauppatori it is possible to eat well by spending less than the restaurants in the city. An alternative to consider since Helsinki is not a very cheap destination. To see, "Pietra della Zarina", the obelisk surmounted by a golden eagle dedicated to Alessandra Feodorovna Romanova, consort of Tsar Nicholas II. Not far away, “Havis Amada”, a fountain with a siren in the center, which the inhabitants of Helsinki consider the symbol of the city.

If Kauppatori is the starting point for a visit to the city, Senaatintori is the official center of Helsinki. Piazza del Senato was conceived like this from the very beginning; ever since, in 1812, the Russians gave the architect a mandate Carl Ludvig Engel to design this space after the transfer of the capital from Turku to Helsinki. Engel, originally from Berlin, but active primarily in St. Petersburg, designed the square in a typically neoclassical style with the deliberate intent to show Russian influence on the city. The project of the Tuormiokirrko, the Lutheran cathedral that dominates the square (see photo). A bare church inside, in keeping with the precepts of Protestantism, but imposing on the outside with its domes that dominate the city sky line. Tuormiokirkko is not the only building overlooking Senate Square. Even the Government Palace, the University and the University Library all overlook this square in which stands a statue of Tsar Alexander II, emperor of Russia and Duke of Finland. To be seen!

Churches are an important chapter in the history of Helsinki. Of history, and of its tourist present, since they are among the most visited places in the city. Near Piazza del Mercato (see point 1), to be precise on theKatajanokka island, there is another religious building that absolutely deserves to be seen. We are talking about the Uspenki Orthodox Cathedral, whose bulbous domes, covered with 22 carat gold, are an important reference like those of the Tuormiokirkko we talked about earlier. The similarities, however, end here. Indeed, Uspenki Cathedral is a triumph of Slavic-Byzantine style. So a flashy church with a red brick facade and, inside, a splendid iconostasis with the depiction of the Last Supper. More generally, walking around Katajanokka is very interesting. On either side of the neighborhood streets there are several early 900s style buildings art noveaux. To be seen!

The most important art museum in all of Finland with one collection of paintings and sculptures from the end of the XNUMXth to the mid-XNUMXth century. The works of art from 1960 onwards, on the other hand, are kept in the Kiasma (see next point), the Museum of Contemporary Art of which we also recommend a visit to get a complete overview of Finnish art. Returning to the Ateneum, the museum exhibits the works of the most popular national artists: Gallen Kallela, Edelfelt, Simberg and others are all represented here, alongside works by Van Gogh, Cezanne, Munch and Chagall. Therefore the national dimension of the museum is not in contradiction with the exhibition of works by foreign artists. Indeed, the latter give even more prestige to the museum and, with it, to the Finnish nation. For more information on history, timetables, prices and exhibitions consult the Official site: ateneum.fi (English version available).

Only a few minutes' walk divides the Ateneum from Kiasma, the Helsinki Museum of Contemporary Art. Over 9000 works on display, with the best of Finnish and Northern European contemporary art. The building, designed by the American architect Steven Holl in the 90s of the last century (inaugurated in 1998), it significantly divided local public opinion. Criticisms focused in particular on the advisability of entrusting a foreigner with the construction of one of the three museums that make up the National Gallery (in addition to the two mentioned, there is also the Sinebrychoff Museum) without sparing, however, even objections to the shape of the structure and its proximity to the statue of the national hero Carl Gustaf Emil Mannerheim (which is also the name of the street on which the building stands). Today, however, there is no longer any nationalist jolt. The success of critics and the public convinced the Finns of the goodness of the project, so much so that the recreational spaces inside and outside the Kiasma have become among the most popular meeting points in Helsinki. For more information on the works exhibited, the temporary exhibitions, timetables and methods of visit consult the Official site: kiasma.fi (English version available).

After Toumiokirkko and Uspenki it is absolutely worth a visit too Temppeliaukio, Lutheran church built in 1969 by the two brothers architects Timo and Tuomo Suomalainen. The peculiarity of this building consists in the fact that it is carved into the rock according to absolutely modern canons. The contrast between the bare stone and the copper dome is remarkable, as are the play of lights of the windows and the acoustics.. It is not surprising, therefore, that the church is often used as a venue for classical music concerts. For times and methods of visits consult the Official site: www.temppeliaukionkirkko.fi (English version available).

About 20 minutes by boat from Kauppatori there is the Suomenlinna fortress, a UNESCO World Heritage Site since 1991. It is an 700th century castle built by the Swedes (who also controlled Finland in the 1808th century) in an anti-Russian function. However, the construction of the fortress, with its naval base, proceeded slowly and "Sveaborg" or "Viapori" (respectively Swedish and Finnish name of the castle) failed its mission. In 1917 the Russians easily conquered the site, transforming it into their own military outpost. For over a century, until Finland's independence in XNUMX (the same year as the Bolshevik revolution), Viapori therefore remained a Russian military base. After that date, the transition to Finland, with contextual renaming to "Suomenlinna", without however losing the military function of the area. We have to wait until the 70s of the last century for the civil conversion of the castle which has since become one of the main tourist attractions in Finland. It is not over, because thanks to the increasing popularity, Suomenlinna which, we recall, extends over 8 islands, has become one of the districts of Helsinki where 800 residents live and around 400 people work in museums, restaurants and other businesses. For more information: www.suomenlinna.fi (English version available).

The sauna for the Finns is the ritual par excellence. From the cities, to the countryside, there is almost no house or condominium that does not have its own sauna. Therefore, a holiday in Helsinki without a sauna is unthinkable (unless, of course, incompatible health conditions), especially since what was said above for houses and condominiums applies, even more so, to hotels. That said, there is no shortage of public saunas. The most famous of Helsinki, active since 1928, is called Kotiharjun Sauna. It is located a few kilometers from the Market Square and Senate Square, traditional points of reference for those who move around the city, and, in the last twenty years, in parallel with the tourist growth of Helsinki, has seen a considerable increase in the number of visitors. For more information on the history, times and rules of conduct (eg men and women do not take the sauna together) to observe consult the place: www.kotiharjunsauna.fi (English version available).

One of the oldest zoos in Europe with over a century of history. Years during which a lot has been done to make the areas where animals live as close as possible to the natural habitats of their respective species. Not a small undertaking, considering that the Helsinki zoo, on the island of Korkeasaari, houses over 150 species of animals, to which we must add the 1000 and more plant species. Animals enjoy maximum freedom even if, for obvious climatic reasons, they cannot always live outdoors. All continents are represented and every effort is aimed at protecting biodiversity. From May to October the island of Korkeasaari can be reached by ferry from the Market Square (Kauppatori). Cars and public transport, on the other hand, move easily all year round. For more information consult the Official site: www.korkeasaari.fi (English version available).

10 The surroundings of Helsinki

From Helsinki there are several places that can be reached for a day trip. Besides Suomenlinna, of which we have already said, the most popular are certainly Porvoo e Tallin. The first is located 50 kilometers from Helsinki, while the Estonian capital is about 80 kilometers away. There are many things to see even if, as they are mostly daily visits, one inevitably focuses on their respective historical centers. Vanha Porvoo is famous for its Gothic-style cathedral, wooden houses and warehouses. The latter, lined up side by side on the city's riverside, draw a landscape so particular that it deserves UNESCO protection (see photo). Status also enjoyed by the historic center of Tallin designed by narrow and cobbled streets full of shops, offices and art galleries. In addition to the Old Town, Toompea Castle is also worth a visit, just over 15 minutes' walk from the ferry dock. And here we come to the last point: both Porvoo and Tallin, in fact, can be reached by land even if, the hydrofoils and catamarans that leave from Kauppatori are by far the most used means of transport, especially from March to October.

1 Do not violate the rules of civil coexistence

Helsinki is among the top cities for quality of life. The institutions are present, the services efficient, and there are no major security problems. There aren't even as many mosquitoes as there are in inland areas and national parks. In conclusion, apart from the usual precautions (do not leave the bag unattended, the wallet and the phone in the back pocket of the trousers, etc.) there are no particular dangers. However, it is good to remember that the livability of the city also rests on a whole series of unwritten rules which, on closer inspection, are as important as laws and codes. Let's talk about the assumptions underlying civil coexistence: the right on the escalators, respect for the queue, the purchase of travel tickets on public transport, etc. There is more: the Finns are very reserved. Few words and the right demeanor (even in expressions of affection) are therefore highly appreciated qualities.


Audio Video 10 things to do and see in Helsinki and 1 not to do
Ireland on the road: 8 days itinerary on the Emerald Isle ❯