12 Facts That Will Surprise You About the Pyramids of Giza

It doesn't matter how much scientists and archaeologists have managed to discover some great ones Pyramids of Giza in Egypt: despite everything they continue to be shrouded in a fascinating aura of mystery.

But then how much do we really know? 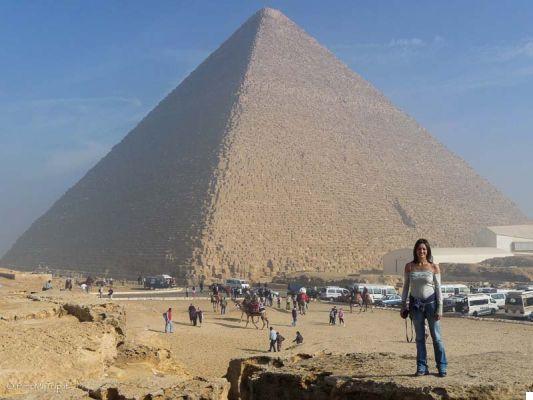 Me in the company of the Pyramid of Cheops

Le Three Pyramids of Giza belong to the complex known as the Necropolis of Giza which also includes other constructions such as the Great Sphinx (the "guardian of the Pyramids"), other pyramids and minor constructions.

Learn more and read mine post about travel to Egypt do it yourself!

Do you want to organize a DIY trip to Egypt and are you looking for a local guide who speaks English? Write me an email and request a free quote!

The three buildings bear the name of the three pharaohs who wanted their construction: La Pyramid of Cheops, the only one of the 7 wonders of the Ancient World to have come down to us; there Pyramid of Chefren that even if of smaller dimensions thanks to its elevated position seems to dominate the whole plateau and the Pyramid of Menkaure, the smallest, most enigmatic and intriguing of the three. 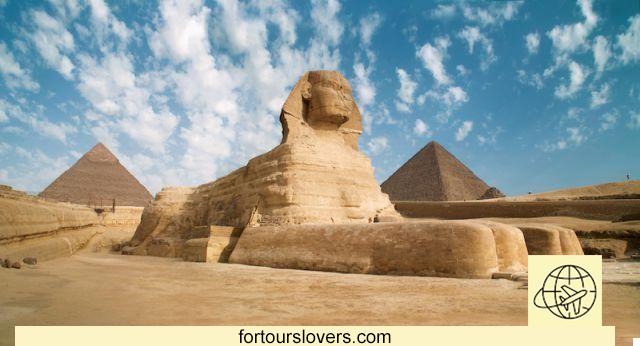 The Sphinx of Giza by Roderick Eime on Flickr.

4,500 years ago, some priests of ancient Egypt prepared the body of the deceased for his journey to the afterlife. It was not a normal deceased person, it was the incarnation of a God on earth: the Pharaoh.

Intestine, stomach, liver and lungs were removed and deposited in the canopic jars. The heart was left in its place, it was the center of thought and soul. The mouth was opened, so that the senses could be reactivated and the deceased could continue to live and reunite with the gods, especially the Sun God Ra.

After being washed carefully, perfumed with cedar oil and wrapped in the finest linen bandages, the body was ready for its final destination: the Great Pyramid, a masterpiece of engineering, on which, according to the historian Herodotus, more than 100,000 men had worked for over twenty years.

Khufu, known to us as Cheops, he was a wise and erudite king but let's face it also a little megalomaniac. His father had already wanted the construction of three pyramids for himself, but Cheops wanted one that was his status symbol, the expression of his authority and his greatness. 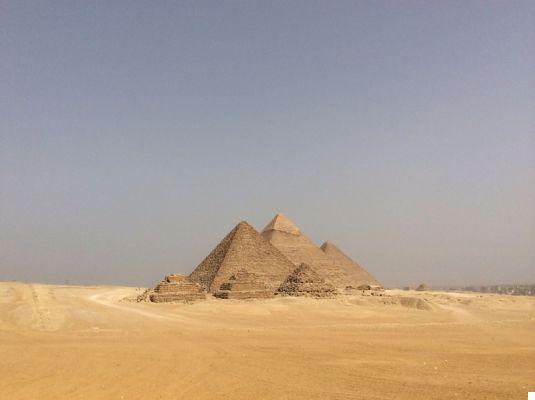 The construction of the Pyramid of Cheops (146 meters high) it began around 2550 BC and approximately 2,3 million stone blocks weighing 2,5 tons each were cut, transported and reassembled for its making.

The second pyramid (dated to 2520 BC and with a height of 136 meters) was built by the son of Cheops, Khafre, who had promised his father that his pyramid would be smaller and in fact it is 3 meters shorter. But probably that's what bothered him and so he built it in an elevated position on a stone base ten meters high so that it dominated the whole plain.

Together with it Chefren also wanted the construction of a guardian with the head of a man and the body of a lion, which symbolized the god Horus: the Great Sphinx.

The third pyramid, the southernmost one and smaller than the other two, was built from Mycerinus (around 2490 A.C) , son of Chefren. Many scholars attribute the smaller dimensions to a temporal factor: a different social structure was emerging that provided for a reduction of the emperor's power.

Also according to the fervent imagination of Herodotus, the pharaoh, after the oracle would have predicted only 6 years left to live, preferred to dedicate them to the pleasures of life, rather than to his death and the pyramid was left unfinished.

12 Facts about the Pyramids of Giza

1 - The Pyramid of Cheops is the only "survivor" of the 7 Wonders of the Ancient World. The others were: the gardens of Babylon, the Temple of Ephesus and Artemis, the statue of Zeus of Olympia, the Mausoleum of Halicarnassus, the Colossus of Rhodes and the Lighthouse of Alexandria.

2 - The Pyramid of Cheops was the tallest structure in the world for 3,871 years, until in 1311 the construction of the Lincoln Cathedral in England was finished which stole its record. Today the tallest building in the world is Dubai's Burj Khalifa. 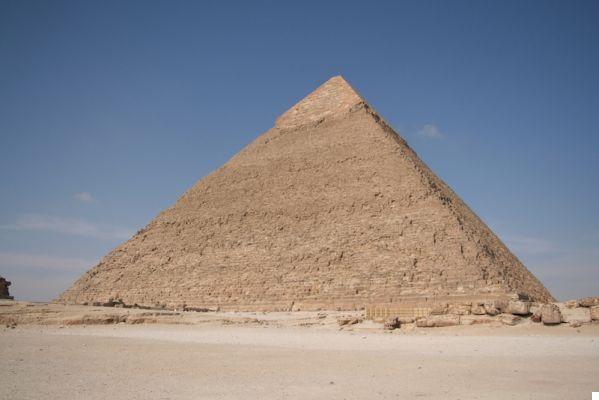 3 - The Pyramids were not built by slaves as written by the imaginative Herodotus, but by skilled craftsmen and regularly salaried workers. In fact, the discovery of workers' graves confirmed this theory. If the workers had been slaves they could not have built their own tombs next to the pyramids of the pharaohs.

4 - The temperature inside the Great Pyramid is constant and is equal to the average temperature of the Earth (20 degrees celsius).

5 - La pyramid of Chefren has the particularity of having preserved a part of the roof on the top: originally the pyramids were covered with smooth slabs of white limestone from Tura (locality located between Cairo and Helwan) which subsequently collapsed or were removed. The pyramid in this way acted like a huge mirror reflecting sunlight: from the moon it would be seen as one star on Earth. This is why the ancient Egyptians called the Pyramid "Ikhet" or, light of glory.

6 - The Pyramid of Cheops is thethe only pyramid in the world not to have 4 faces but eight. In fact, the 4 faces are actually concave: the blocks have been arranged in such a way as to create a central depression on each side with a variation of about half a degree compared to the ideal plane. This detail is visible only from above or when the setting sun is perfectly aligned with the south facade. Without this alignment, the concavity is completely invisible. 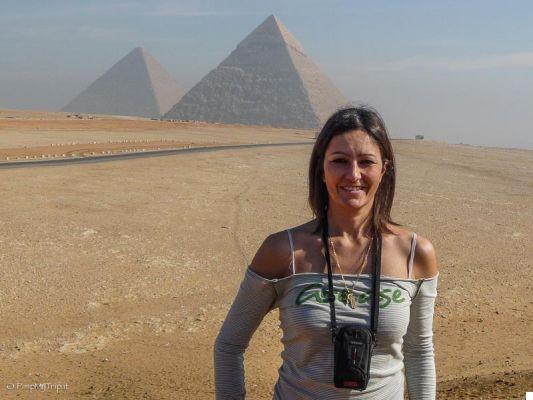 7 - La Pyramid of Menkaure has a large vertical gash in the north side which dates back to the XNUMXth century and was the work of Saladin's son, Othman ibn Yussef who had made up his mind to tear down the pyramid. After 8 months of attempts by his men and since the result had been quite painful, Othman ibn Yussef abandoned his purpose.

8 - The decorated sarcophagus in which the mummy of Pharaoh Menkaure, was lost in the shipwreck of the schooner Beatrice while being transported to the British Museum in London.

Also according to this theory, the Sphinx would represent the constellation of Leo.

Apparently this would be a "hoax". Ed Krupp, professor of astronomy, pointed out that the photographic overlap between the Orion belt and the three pyramids was achieved no less than by overturning Egypt!

10 - One of the mysteries always concerning the three pyramids it was as if they had been built and above all how the ancient Egyptians had managed to transport the heavy blocks of stone. This question was answered thanks to an image in the tomb of Djehutihotep which showed how the Egyptians used sledges to transport, in this case, an alabaster statue whose weight is estimated to be around 50 tons. The trick was getting the sand wet by decreasing the friction and making the sled glide better.

11 - Also according to a strange theory, the Pyramid of Cheops was built not by men but by UFOs. This theory was based on the assumption that the pyramids were constructions so advanced as to require too advanced knowledge for those ancient times. Today we know instead that the ancient Egyptians had great notions of mathematics, geometry and astronomy.

12 - The pyramids were 4. La lost pyramid it would be that of Djedefra which is located near the modern city of Abu Rawash of which only a few traces remain, such as wells and tunnels. It is improperly called the fourth pyramid of Giza even though it is located 8 km from the necropolis.

The Best Excursions from Sharm-El-Sheikh

Abu Simbel: What You Need to Know and How to Visit It

Khan el Khalili: How to Trade as a Real Professional

The Best Excursions from Hurghada

When to go to Egypt, Best Month, Weather, Climate, Time