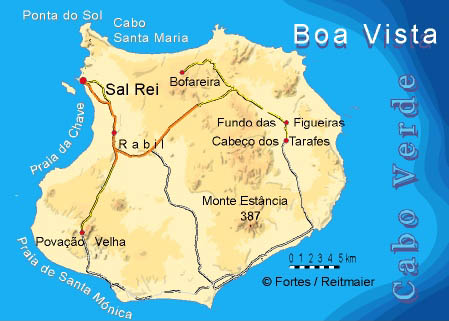 Where is Cape Verde?

All the islands are characterized by green hills, long white sandy beaches and turquoise sea. Despite these riches, the archipelago has only recently been discovered by tourism and therefore remains largely unspoiled and affordable.

Usually, the doubt before going to Cape Verde is which island to choose, the most popular are always Sal and Boa Vista, let's try to analyze these two islands.


The main difference between the two islands is that Sal is much more urbanized and more touristic, while Boa Vista has kept (for now) its wild charm, has more beaches and more variety of excursions.

Boa Vista is also a bit warmer and less windy, Sal is well equipped for those who practice water sports.

How to get to CAPE VERDE

The international airport of the archipelago is located on the island of Sal and is the stopover Amilcar Cabral. The companies that offer direct flights from Spain to Sal and Boavista, are the Neos and Lauda Air. The duration is approximately 6 hours. Otherwise, the Portuguese national airline operates flights with stopover in Lisbon. The flight duration is approximately 10 hours.

Cape Verde when to go

Cape Verde's climateis typically tropical with average temperatures of 26 °, it is possible to visit at any time of the year.


Winds are strong all year round but the period from December to May is the one with the strongest winds, which is certainly appreciated by surfers and kitesurfers.

2 hours in winter and 3 hours from March to October during the summer period.

The official language is Portuguese. The language spoken by the local population is Cape Verdean Creole, a mixture of Portuguese and some African languages. However, they are widespread and usually include Italian, English, French and Spanish.

The current currency is the Cape Verdean Escudo (ECV). One euro corresponds to approximately 110.27 escudos.

The only credit card accepted, only in some places, is Visa. It is not possible to withdraw money through ATMs, but you can withdraw cash at banks. The euro is accepted almost everywhere, so it is preferable to have cash.

I would conclude this article by saying that if you plan to visit Cape Verde, concentrate on your vacation and think about the lovely place you are about to arrive, and don't think too much about the strong wind and high waves that are part of this beautiful island, enjoy it and enjoy it ... have a good trip.

add a comment of Cape Verde Salt Island or Boa Vista: Where is it and How to Get There, Useful Information