Caves of Neptune and Capo Caccia: an oasis on the Island of Stories

And this time she talks about her beloved Sardinia, where she was born and raised, telling us about two particular and beautiful places: Capo Caccia and Neptune's Caves. 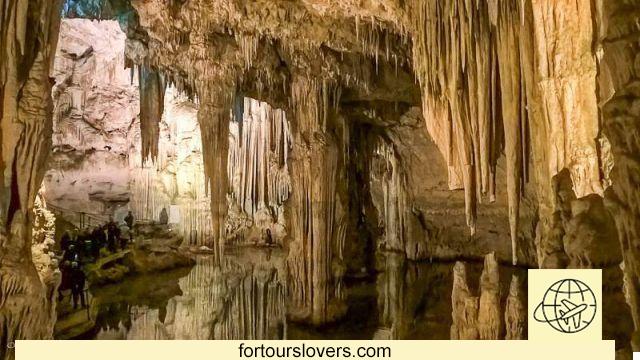 The interior of the Neptune Caves

The stories I like the most are the ones that few people know. When it comes to travel, these stories abound, but they always circulate too little (and maybe that's for the best).

Did you know that the Sardinia (extremely biased affection, since I was born and raised there) is it not only crystal clear sea and juniper scent, but it hides some of the most exciting natural wonders of our country?

Did you know that just go down into the bowels of this crystalline sea, where the shades of the water are a little bluer, to go and follow the ancient paths of monk seal?

Capo Caccia is an imposing, majestic, proud limestone promontory dating back to the Cretaceous period, overlooking the sea, located in the north-western extremity of Sardinia, clearly visible from the promenade of the pristine gem of city ​​of Alghero, testimony of the Spanish and Catalan influence on the island.

This fabulous end packs the Gulf of Porto Conte, a natural inlet that hosts a large and beautiful Natural Park. It is so named because of the pigeon hunts that the notables of the nineteenth century made from the boat in periods of calm around the promontory.

Well, behind (and inside) this sinuous promontory, which can be reached via a marvelously panoramic road, which climbs among the eucalyptus trees and then flows along the gulf, the incredibly well-kept Neptune's Caves, a natural oasis of karst ravines partially discovered and visible (the caves are more or less like an iceberg, unfortunately we see a tiny section of them, but the real wonder of the work of water in the rock is reserved for a few lucky speleologists). 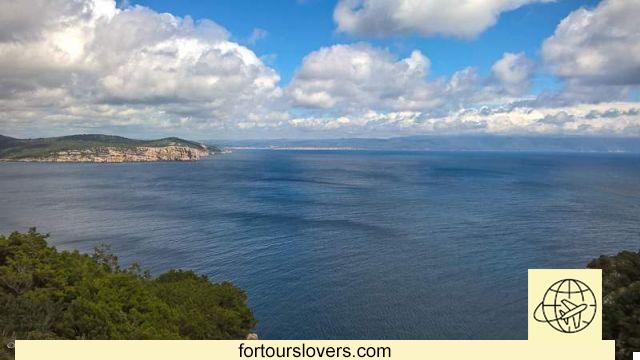 The caves are just some of the important attractions of the protected area of ​​Capo Caccia, but fortunately the adventure is for everyone: excursions in the Porto Conte Park for lovers of fauna and flora, diving in 'Protected Marine Area of ​​Capocaccia for real divers and a little bit of thrill for those who really want to feel nature close, because being a little afraid of its wild impetuosity makes us feel hopelessly alive.

There are currently two different ways to get to Capo Caccia and at Neptune's Caves: by land by car, starting from Alghero towards Fertilia, follow the signs for Capo Caccia and Porto Conte, and arrive directly on the promontory.

By sea you arrive directly at the Neptune Caves by boat, starting from port of Alghero with the companies that carry out the excursions.

Linea Grotte offers daily connections from the port of Alghero for 7 months a year.

Find more information on the official website of the Caves Line.

What to choose? It depends on what you like best and on how long you have been on the sofa in recent times: the boat excursion is panoramic, relaxing and absolutely suggestive, made a few meters from the coast and from the promontories that emerge majestically from the sea. 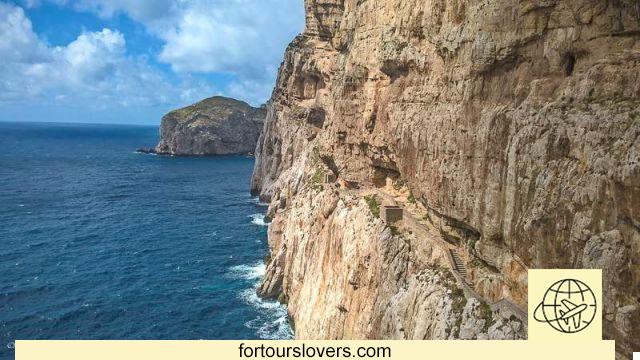 La Escala del Cabirol, 656 fabulous steps to descend, a little less (for the effort) to climb!


Nothing and no one, however, can replace the thrill of going down on foot (and, alas, going back up) the Staircase of the Roe deer, a magnificent staircase of 654 steps on the rock wall, so called precisely because it wants to give you the fantasy of going down like a goat: hopping along the vertical wall of a very inclined limestone rock.

The beauty of this staircase is its proximity to the rock, as well as the incredible panoramic points that you can grasp during the descent, seeing the most remote corners of the promontory from countless perspectives.

Beyond the suggestive name, the route, which starts right from the top of the promontory reachable by car, is safe and practicable by most, sufficiently wide, but absolutely panoramic and scenic and will allow you to truly walk this fantastic promontory up to the magnificent Neptune's Caves.

If you are not in fantastic physical shape, go up slowly and avoid the central hours of the day, when the sun beats down on your head.

Visit to the Neptune Caves

Descending the evil steps, with the sea wind in your hair and the seagulls that seem to play who throws themselves towards the sea in the most reckless way, you will arrive at the magnificent Neptune's Caves (the entrance ticket in April 2015 was € 13 with discounts for seniors and children).

At the time of our visit, it was possible to visit the caves with the guide, who waits for a sufficiently large group of people, and then lead him inside the halls. 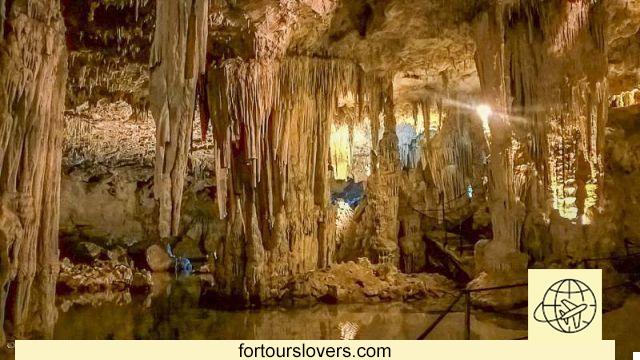 Interior of the Caves

As I wrote before, the Caves extend for about 4 km, but the path accessible to the public will not be longer than a few hundred meters. It is estimated that their formation dates back to about 2 million years ago, and that primitive men knew and used these caves during the Neolithic period, based on some findings made.

Small space for a nostalgic but somewhat sad story: this was the acclaimed habitat of Monk seal, unfortunately no longer present today, and escaped (if not extinct) from these ravines at the beginning of the 900th century, due to the ferocious hunting activities perpetrated by man at the end of the 800th century. 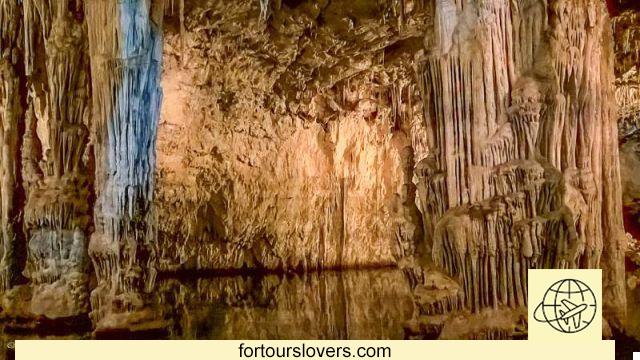 Interior of the Caves

At the beginning of the path he offers a beautiful display of himself Lamarmora lake, a salt lake with extraordinarily clear waters, where the underwater entrance is clearly visible, probably the access of the same seals in more distant times. Through the pink shades of stalactites and stalagmites, we arrive at the Hall of the Royal Palace, the main and most impressive room, where you can see the Sassolini beach, so called because it was once full of small pebbles, also called Beach of the Seals.

This room is magnificent and majestic, the plays of light offer a chromatic show that fades from the darkest and darkest corners to bright reddish corners, up to pink reflections and white and shiny stalactites. The imposing limestone columns make the space even more impressive and the highest reaches 18 meters in height. The dome, the ceiling of the cave, is 56 meters high. It then continues in Smith Room (it takes its name from one of the many explorers of the caves, during the 800th century) or Organ Room, so named for a magnificent formation of stalactites and stalagmites that recalls the shape of the musical instrument and that dominates the surrounding space, 50 meters wide and 49 high.

A small climb then offers you a suggestive view across the Tribuna della Musica, a terrace overlooking the Sala della Reggia, slightly elevated (and… watch your head!). This terrace is anticipated by the Hall of Lace and Lace, so called because it is characterized by an infinity of stalactites on the ceiling, which curl on themselves in curious shapes, rising almost upwards, due to their chemical composition. 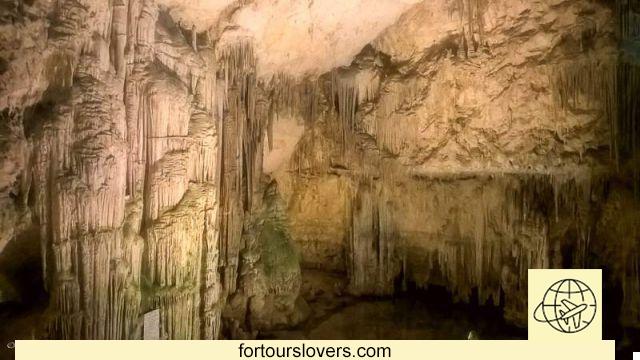 During our visit we were told that, due to their "seniority", these caves are now inactive, that is, the water has finished making its paths to scratch the rock and its magnificent architecture is therefore defined and as such even more important to preserve and maintain in its beauty. Only a few very small sections, visible because they are particularly white and bright, are those still undergoing transformation, which perhaps, who knows, in a few hundred years will offer visitors even more impressive and memorable shows.

Our oasis of freshness greets us like this, retracing the magnificent rooms, and we move towards the exit of the cave, to go up the infamous Escala del Cabirol, stopping to admire (and take countless photographs) the rock spurs so close, so threatening , but so hypnotic and irresistible.

After 654 steps, we indulge in something to drink in the panoramic little bar (yes, nature has never totally won), which despite being full, offers us a fantastic view of the Gulf and an unprecedented sunset over the sea, with the wind in the hair that recalls the scents, colors and sounds of this magnificent land.

The Island of Stories. The Island that doesn't exist but that sometimes exists, e it manifests itself in an unforgettable way. 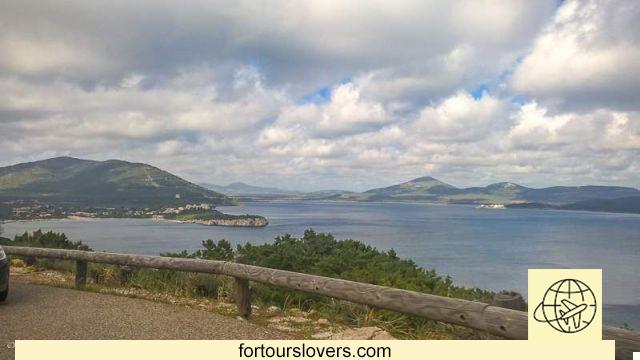 Visiting Hours and Prices (Updated to 2016)

Open all year round unless adverse weather conditions. The visits to the Caves of Neptune they are suspended in case of rough seas.

add a comment of Caves of Neptune and Capo Caccia: an oasis on the Island of Stories