The truth is that it was very difficult for me, who ride a horse, to write this post: taking part as a passive observer of the jineteada raised a lot of questions in me. 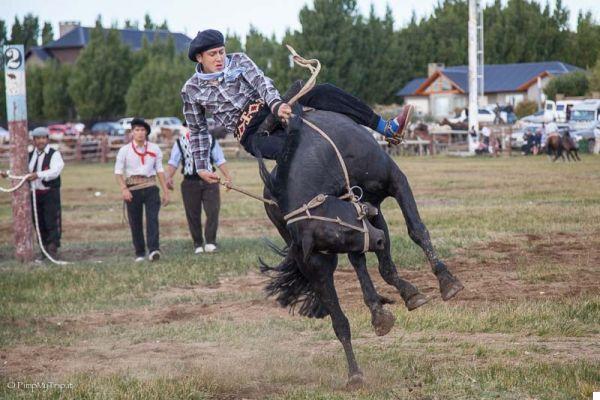 I heard them before I saw them: the sound of hundreds of clogs on the asphalt of the road. The main street of El Calafate it was packed with people. I stopped to browse and saw them go by: dozens and dozens of people on horseback, dressed in traditional clothes with coats of arms and flags and with a large crowd of people following them. 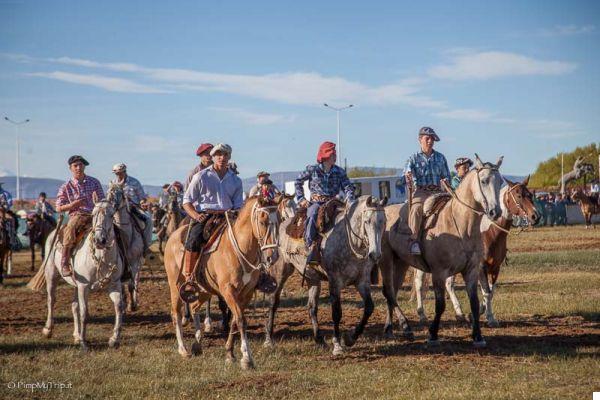 I got in the wake and found myself in front of a huge grass and clay court.

I discovered that it was a jineteada that is theequivalent of a rodeo: gauchos had arrived here from all over the country and also from parts of Chile. 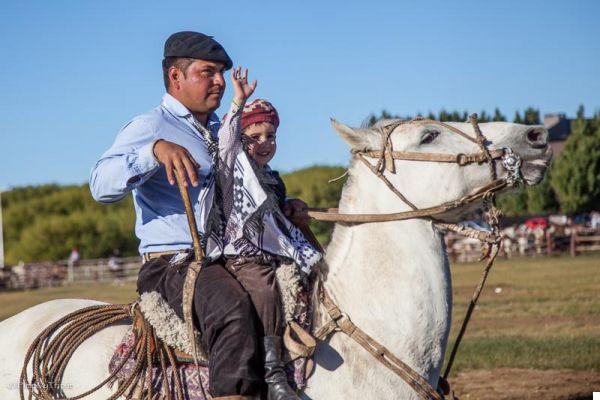 Everyone proudly wore traditional clothes: the alpargatas, canvas and rope shoes, better known to us as espadrilles, the bombachas, or extremely resistant cotton trousers, ponchos and the boina, the hat.

Some of them also wore the traditional knife tied behind the back, the facón, strictly in silver. 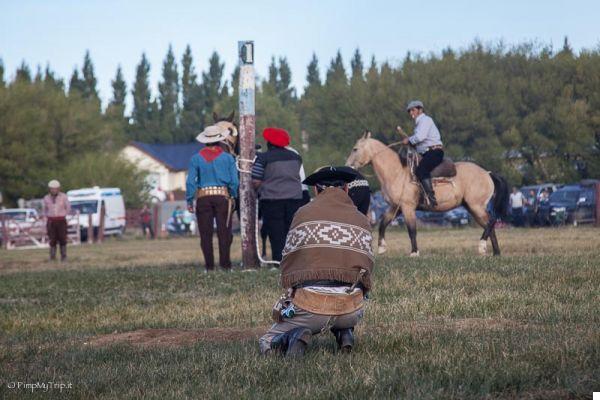 Behind the stands on some barbecues, asado (meat cooked on the grill) was cooked, then accompanied by chimichurri, a sauce made up of herbs, garlic, oil and hot pepper; around the fires people drank (I discovered that the Argentines drink a kind of fernet mixed with coca cola), ate and smoked tobacco.

The long furrows carved into the skin of older people tell of a tiring life, lived in the open air perpetually exposed to the sun and wind of the Patagonian steppe. But today was a day of celebration, eyes crinkled under the brim of the hats smiled proudly as they watched the young grandchildren test their courage. 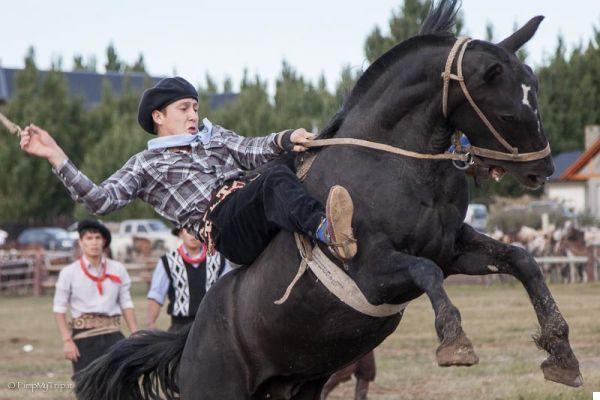 The jineteada takes place like this: in turn a wild horse (I later found out that these horses are not always wild but they are trained for this) is tied to a pole so that the gaucho on duty can get on top of it.

I was shocked when I saw that they were all very young boys. 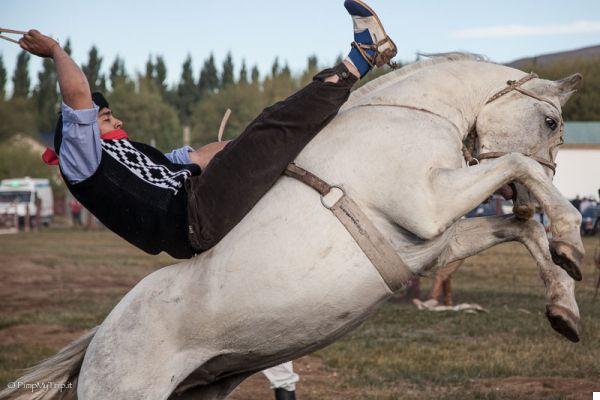 At the signal of the referee, the young horse is released: the challenge of the riders is to manage not to be unsaddled by the foal who tries to free himself from his jailer in every possible way.

The jineteada requires a lot of experience and dexterity: staying in the saddle is much more difficult than it might seem.

Whoever succeeds, at the end of the time (from 6 to 15 seconds, depending on the category) is cheered and applauded by the crowd. 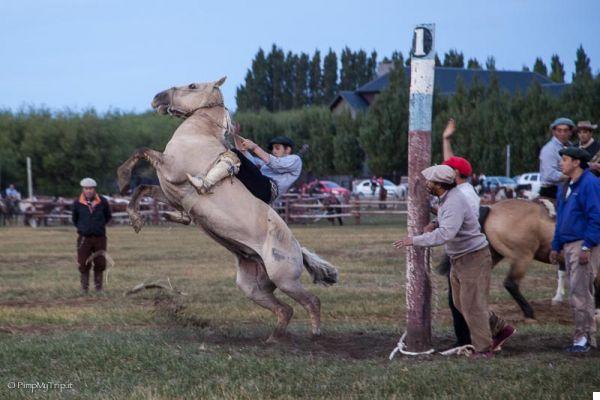 When I saw the first boy forcefully unhorsed fall to the ground and touch his neck, my heart skipped a beat.

Fortunately, however, it was only the blow taken: the very young cowboy stood up proudly brushing the dust off his pants with the palms of his hands. Back on the sidelines, he was consoled by his opponents with friendly smiles and strong backslapping. 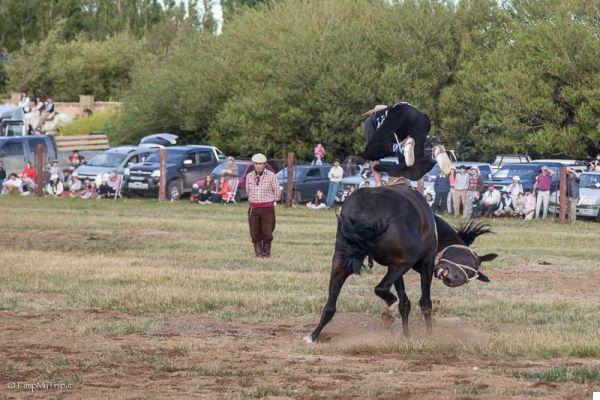 The origins of the Argentine gauchos go back to the Spanish conquistadors who arrived in Latin America. Even today the gauchos continue to carry out their task of raising sheep, cattle and horses.

Although many estancias (Argentina's answer to the ranch) have been converted into hotels, they still play a pivotal role in the country's economy.


In Argentine culture the image of the gaucho represents strength, independence and above all freedom. The figure of these romantic lonely cowboys has always stimulated the imagination and for hundreds of years inspired, poems, stories and music of the Argentine tradition. 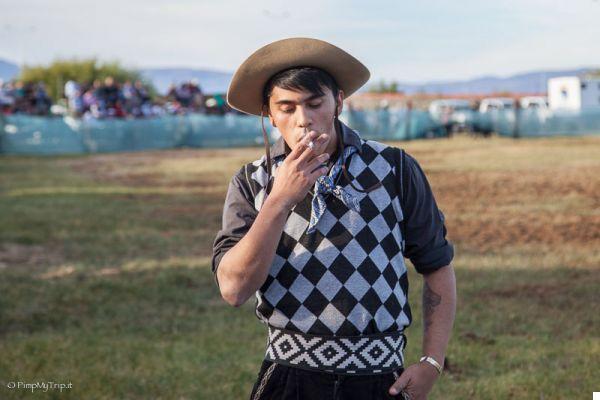 His identity is well represented in these lines by the Argentine writer José Hernandez:

“His hope is his courage, his defense is prudence; his horse is his salvation and he spends sleepless nights with no other protection than the starry sky and no other friend but his blade ”. 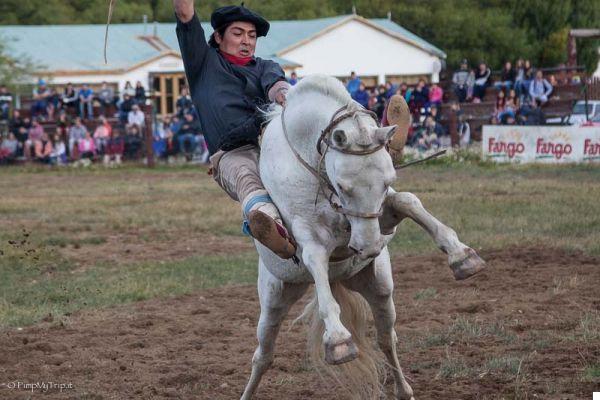 The first gauchos appeared around the 18th century. They led a mostly solitary life dedicated to themselves, living by taming wild horses and caring for livestock. They were people who needed only a few clothes, a good horse and a knife. They didn't give a damn about the laws, they didn't account for their life to anyone, and all they wanted was an evening around the fire drinking, arguing, singing and fighting. 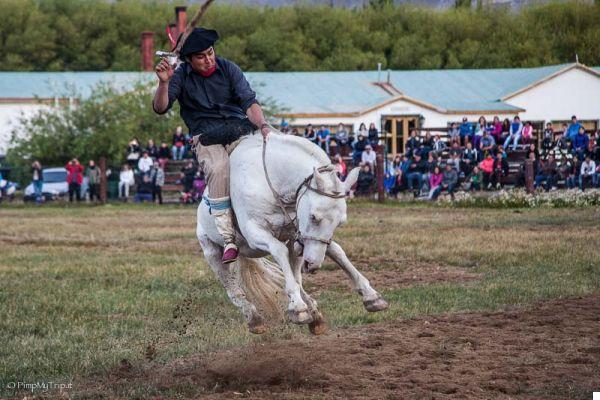 They roamed the endless windswept plains of Argentina, sipping mate and hunting cattle. They could not keep the meat for which they cooked it on fires in the open air: this is how theroast, the Argentine dish par excellence that is still cooked today in every corner of the country.


If the gaucho could be imagined as a mythological figure, it would surely be the centaur: half man and half horse. An ancient saying also says: "the gaucho and his horse are one, a man on foot is a half gaucho". 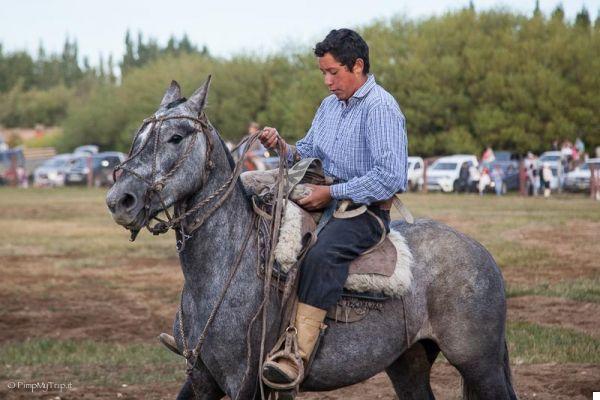 With the arrival of the estancias, the gauchos gradually lost their completely nomadic life and began to obtain jobs from the large landowners to take care of their livestock.

Today, nearly 150.000 gauchos still keep this culture alive: most of them work in large estancias with horses, cattle and sheep and spend their time in the infinite spaces of the Patagonian steppe, just as they did hundreds of years ago. 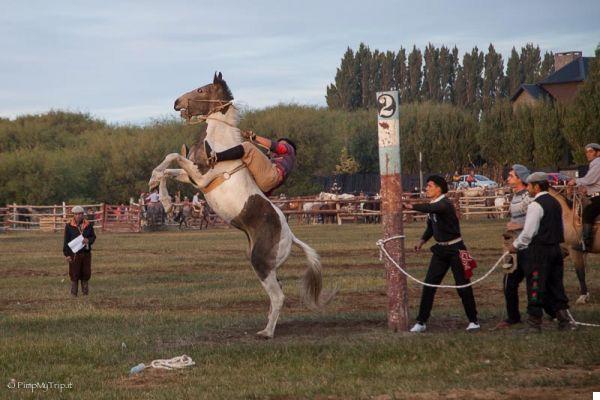 Although for many, due to the loss of their nomadic life, the real gaucho no longer exists, I breathed in the air of pure authenticity at the rodeo.

For me it was a festive interruption to the still silence of the arid steppe, a way to get in touch with a tradition completely unknown to me. 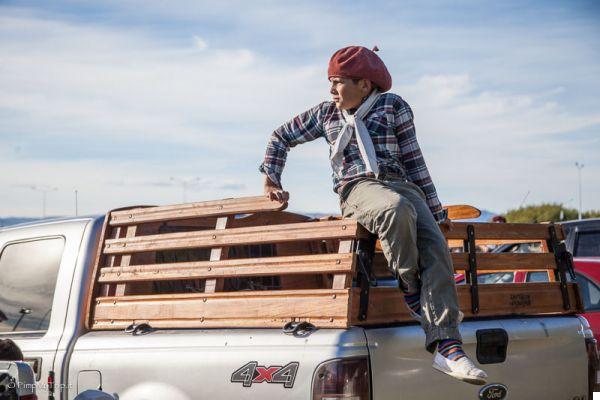 For everyone else it was a simple moment of that life they have always lived.

Many animal rights associations are committed to abolishing the jineteada, at least as it is practiced today, as it is a very dangerous tradition for both riders and horses.

Especially after the killing of a horse, “El Zorrito”, due to an accident during the jineteada of the National Folklore and Doma Festival held in the province of Cordoba and the breaking of a leg, the petition reached about 1,700 signatures. At the moment, however, jineteada is still widely practiced not only in Argentina, but also in other Latin American countries. 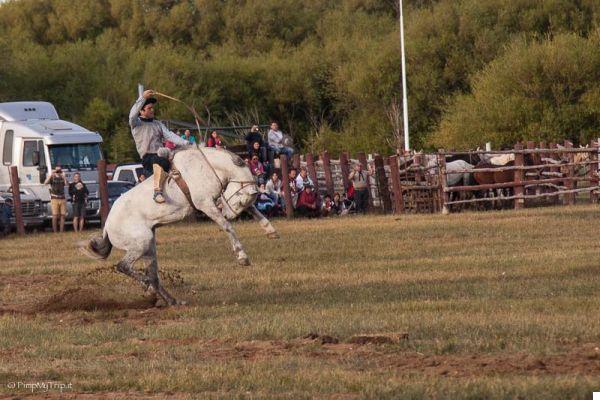 After much reflection as usual, I didn't find an answer and indeed, my doubts became even bigger.

The main question I asked myself was whether or not it is right to use these splendid animals for a playful event, especially if they are rude like this, even if they are strongly part of the local culture and tradition (the alternative would be the slaughterhouse).

What do you think about it?

Gaudí in Barcelona: a Different Itinerary to Discover the City ❯

Argentina: 4 Beautiful and Recommended Itineraries for Everyone

add a comment of Gauchos of Argentina, A Rodeo in the Patagonian Steppe