Greek Islands Yes, but Which to Choose?

There are more than 6000 Greek islands, and of these only 227 are inhabited. I have never liked to make rankings, I think they make little sense and in this case they have even less sense since each of these islands has different peculiarities and its own well-defined personality.

I believe that the concept of beauty has a strong subjective component and that the beauty of a place is above all in the eyes of who has experienced it firsthand. There is no better island, only one more fitting of another in relation to what we are looking for and our needs, only in this way is it possible to make a targeted choice that in the end will not leave us unsatisfied.

The first step to take is therefore to ask oneself what am i looking for?

More articles on the Greek Islands

Definitive guide to the trip to the Greek islands do it yourself, how to organize it! 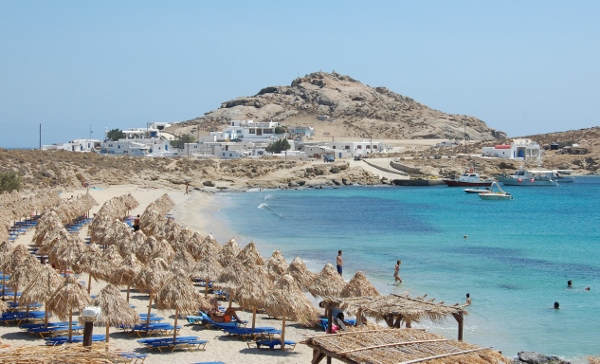 Among Greek islands recommended for those who want to have fun, Mykonos (Cyclades) is certainly the undisputed queen of nightlife, but also offers white beaches and clear waters.

Charming, eccentric and transgressive is the island of excesses and tolerance, one of those trendy destinations: here the music plays on the beach from morning to night, when the streets are transformed into a large disco where a flood of young people pass from club to club enjoying the fantastic nightlife that the island offers.

Mykonos on the other hand it also boasts an enviable sea and in recent years more and more families with children they choose it as a destination for their holidays.

How to get there: getting to Mykonos is very easy there are both daily direct flights and Athens, as well as ferries that connect Mykonos both with other islands and with the mainland. 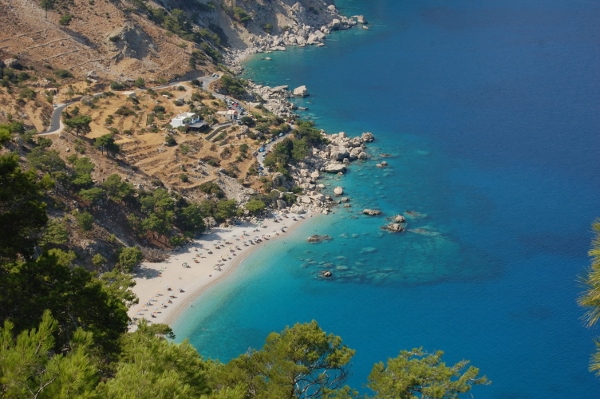 Also Ios (Cyclades) like Mykonos is one of the entertainment capitals. Bars, discos, clubs, you can dance everywhere and at any time, especially in the months of July and August when the island is filled with very young people who come here with the idea of ​​having fun and transgressing.

Ios is also there cheapest among the Greek islands. Since most of the people who come here are young budget travelers, it's easy to find cheap food (two euro gyros), accommodation (10 euro a night) and drinks.

Ios has among the best beaches in Greece. All are wide white sand beaches and on the opposite side of the island from the city, they are virtually deserted.

How to get to Ios: it is only possible to arrive by sea as it does not have its own airport. Ferries to Ios depart from Athens (Piraeus), Santorini, Crete and Mykonos (for connections and timetables, please refer to the website Greek Travel Pages )

Relax and sea: Naxos and Skopelos

If you are not interested in unbridled fun, but are looking for an island still far from mass tourism to discover deserted and wild beaches and blue sea Naxos (Cyclades) is the island for you.


Easily accessible Naxos is an island with a great charm that offers the visitor not only beaches but also many other things to visit such as the famous Lead to, statues, temples, small churches, emery mines. If you want to know more about Naxos I suggest you read the article by Patrick.

Naxos is also one of the islands more suitable for families to the great beaches and the main town is full of wonderful tavernas serving some of the best dishes on the Greek islands. The villages in the hinterland are wonderful to explore.

How to get there: by plane from Athens (about 40 minutes) or by ferry from Piraeus (5 hours, 3 and a half hours by fast ship), which also stops at the most famous Paros, which is exactly opposite.

Skopelos (Northern Sporades) is not among the most popular Greek tourist destinations, probably due to the absence of an airport: it is not possible to think of other reasons since Skopelos is an island full of greenery and beaches of unique beauty, considered among the most beautiful not only in Europe, but also in the world.

How to get there: by sea from Skiatos, or from Volos, a city on the Greek coast.

Culture and sea: Rhodes and Crete

Rhodes it represents the perfect mix for those who want a fairly quiet island in which to alternate days on a crystalline sea with cultural visits.


In addition to its beauty, it is no coincidence that it has been nicknamed "the pearl of the Aegean Sea". Rhodes is also rich in attractions of great cultural interest such as the medieval city of Rhodes (Unesco World Heritage Site) and the town of Lindos, whose white houses cling perched around a rocky peak that houses the ancient acropolis, the most famous of the ancient cities of the Dodecanese and which welcomes half a million visitors every year.

My advice is to rent a car and change the beach every day.

RENT A CAR ON THE ISLANDS

Rent a car (or a scooter) it is the best way to explore the islands.

The roads are good and the fuel is cheap. Having your own car gives you the flexibility to travel at your own pace and go to deserted beaches and places where you can't get there any other way.

To find the cheapest car I use and recommend RentalCars.com at this link, a car rental company comparator.

How to get to Rhodes: there are several low cost airlines offering cheap and almost daily direct flights.

Crete it is the largest Greek island and is full of wonderful beaches, historical monuments, excursions and small towns. There are so many things to do and see that if you only have one week available, you should dedicate it only to this island.

If you have two weeks, it is an excellent combination with Santorini that can be reached in a few hours thanks to the ferry connections.

Off the beaten track: Amorgos, Folegandros and Donoussa

For those looking for destinations far from the most famous islands, how not to recommend the Small Cyclades and especially Amorgos, folegandros and the most distant of all: the remote Donoussa. 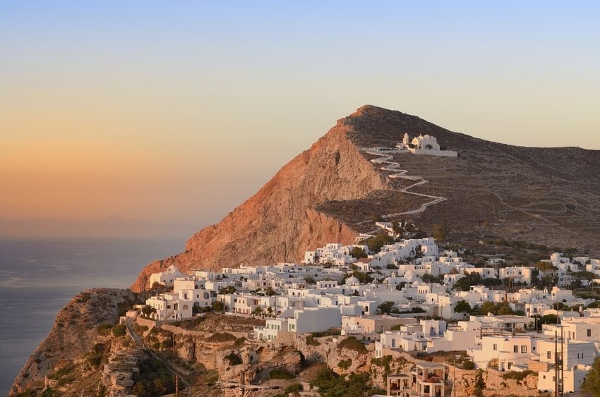 The latter with its just over 100 inhabitants is ideal for those who want to spend a relaxing holiday and for those looking for a place genuine not yet contaminated by mass tourism.

No discos, therefore, a few taverns in which to spend the evenings, few transports and poorly equipped beaches on an intense blue sea. The best pastimes? Swim, sunbathe, read a good book and, why not, bring your fishing rod!

How to get there: clearly if these islands have remained a bit isolated from crazy tourism, it is also thanks to their position that makes them difficult to reach.

Amorgos: by ferry from Piraeus (Athens). About 9 hours of crossing

Donoussa: by ferry, from Piraeus (about 9 hours) or from other Cycladic islands with the line Bluestar Ferries.

Folegandros: from Naxos and Paros by ferry or always by sea from Piraeus 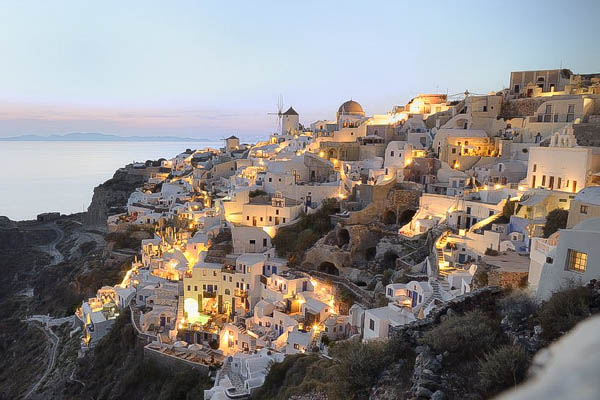 Who hasn't seen the classic postcard that stands out on the front pages of most travel agency catalogs? Who does not have the image of white houses with blue roofs, clinging to a steep side of rock facing the most romantic sunset imaginable?

Exactly, we are talking about her, the refined one Santorini, par excellence the recommended destination for those who want to spend a week for two between the beach, relaxation and romantic evenings in front of excellent fresh fish.

How to get there: Santorini is among the most accessible Greek islands, both by sea and by plane.

Island of extreme beauty and dal exotic taste due to the beaches of long sand dunes and cedar trees Elafonissos it is the place that welcomes tourists looking for romance and tranquility with open arms. The beaches of Simos Beach and Panagitsa from which you can watch a romantic sunset over the sea.

How to get there: even here it is possible to arrive only by sea: - Pounda ferry (Vinglatia) - from Neapolis by gulet

For those traveling with children, the islands that are easy to reach are certainly recommended, which have an airport, accommodation facilities adapted to their needs, wide and sandy beaches and attractions for leisure. Among these certainly the already mentioned Rhodes, but also Kos, Crete e Lefkada which can be reached directly by ferry from some nearby ports.

For all tastes: Skiathos 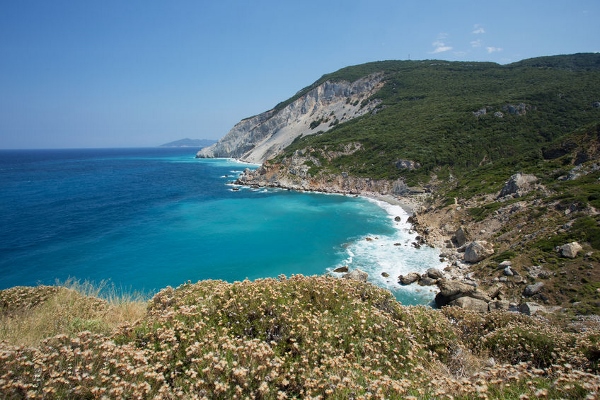 In recent years, the success of Skiathos as a holiday destination is literally ramping up. Sporades Island, is a fertile island with magnificent beaches, nightlife, entertainment and churches and monasteries to visit.

Here you can find excellent facilities, water games, tennis clubs, diving centers and beautiful evening shows that are organized often, especially in the high season. There are also beaches for all tastes, from the long and sandy ones suitable for families, to the hidden ones reachable only by boat, to those dedicated to nudists.

How to get there: by plane or by ferry

For those seeking relaxation: Paros

In addition to Rhodes and Santorini, Paros it's my favorite island. There are some ruins, a cave and boat trips to do, but overall this island is for those who just want to relax.

There is no nightlife, no crowds, no cruise ships docking at the port. It is quiet.

Quiet is the right word.

The island is simply stunning and serene. My favorite area? The port of Naoussa. In addition to having delicious and inexpensive seafood, it's a simply gorgeous place to stroll. There is a small beach and you can visit the old fort. Sitting on the beach watching the fishing boats return from their trips at sea is a great way to pass some time.

If you know other Greek islands that deserve special attention, please leave them written in the comments so we can talk about them!

add a comment of Greek Islands Yes, but Which to Choose?