The 10 Best Things to See in Camargue

La Camargue it is located in the South of France, is a large area formed by the delta of the Rhone river, and consists mainly of salt flats. It stretches south of Arles for over 30 km, a land of swamps and ponds, wild landscapes and animals that live free among pristine dunes and lush vegetation.

The largest flamingo colony in Europe lives here, but you can also see gulls, herons, hawks, horses and bulls. 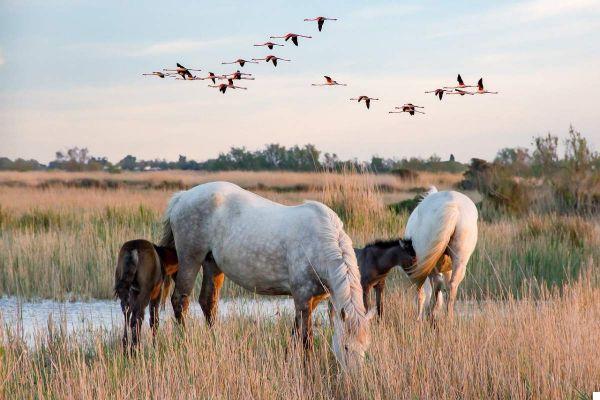 The Camargue is also one of my favorite places in all of France, it is not very far from Genoa so I have been able to explore it several times, especially in the period of Festival of the gypsies of Santies Maries de La Mer (I went 3 times and had fun like crazy)

A trip to the Camargue is a journey of nature, small villages and the feeling of freedom. In this article I will suggest you what to see and do in Camargue so that you can better organize your holiday. 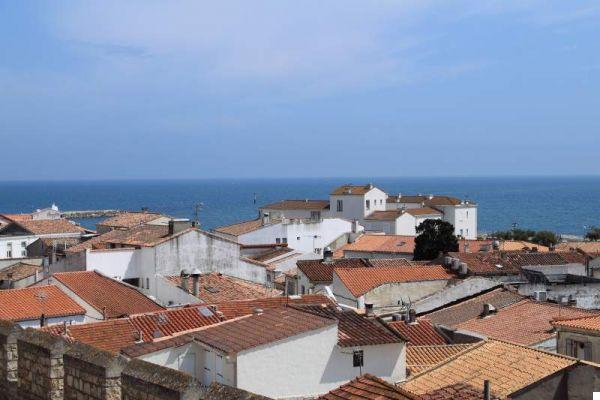 Saintes Maries de la Mer it is the quintessence of the Camargue with its white houses and orange roofs.

The small town develops close to huge sandy beaches, but the narrow streets, the white houses and the large lagoon behind it are the real attraction.

La Church of Saintes Maries de la Mer it is the most important monument of the town and was built between the XNUMXth and XNUMXth centuries as a real fortress that served as a lookout tower and as protection for the inhabitants from attacks by Saracen pirates.

The name of the church refers to Marie Salome e Marie Jacobè who, according to tradition, landed here together with their servant Sara La Nera and to other disciples of Jesus.

The statues of the three women are kept inside the Cathedral. Although Sara has a secondary role for the Church, this figure is important for the gypsy culture, enough to be considered the patron saint.

This is how every 24 May the gypsy community gathers on the streets and beaches of Saintes Maries de la Mer to celebrate it: it is Le Pèlerinage des Gitans, one of the most famous festivals in this part of France. 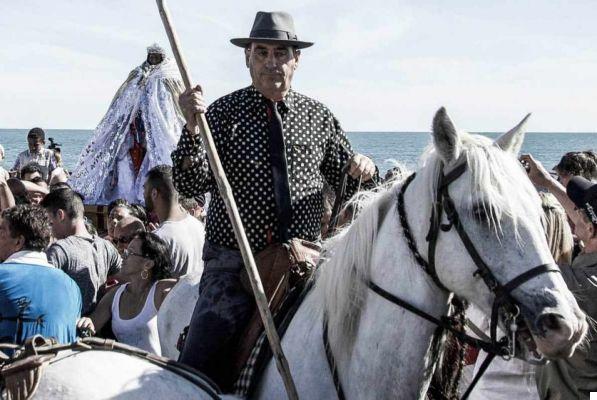 The black statue of Santa Sara is taken from the crypt of the Church and is carried in procession into the sea, while the crowd with music, songs and the sound of violins follows it. I assure you that it is one of the most beautiful experiences you can have!

During a visit to the town, I recommend that you go up to the roof of the Cathedral to enjoy the view from above (it costs a few euros).

From here you have a 360 degree view of the city and you can even lie down on the roof to get some sun and a few minutes of relaxation. 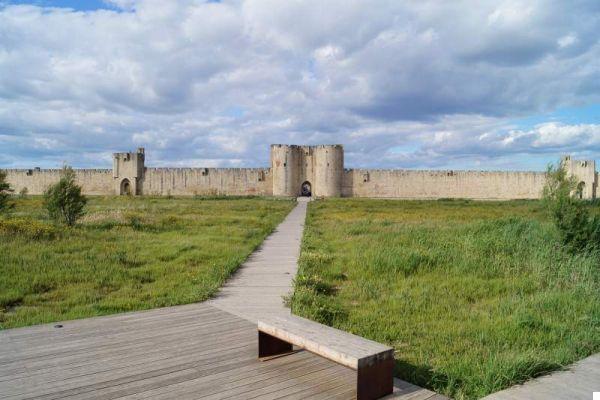 The second step that I suggest is Aigues Mortes, a fortified city that owes its name to the marshes and salt pans that characterize the area.

The town is characterized by mighty walls on which it is possible to walk to enjoy a beautiful view of the surrounding landscape. Do not miss a visit to the city walls and the Constance Tower, a large masonry keep whose walls are 6 meters thick and which offered protection to the city.


Aigues Mortes can be visited in half a day and afterwards you will have time to go to the nearby salt pan, the largest in the Mediterranean.

You can make the visit on foot or with the little train made available to tourists: during the tour you can admire the flamingos and the huge salt dunes. 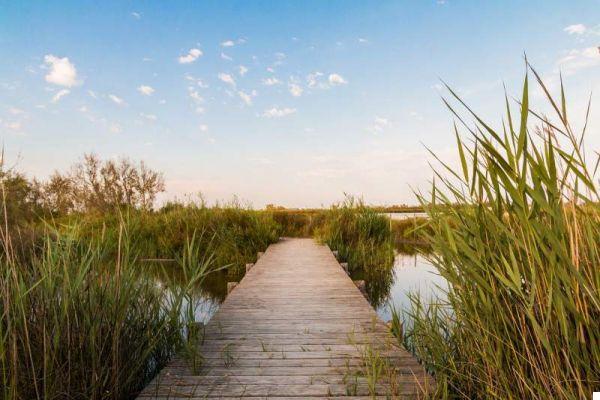 A trip to the Camargue is not complete if you don't visit his Regional Park and you do not immerse yourself in its wild nature to discover its most authentic soul.

The park develops between the two arms of the Rhone Delta, between prairies, lagoons and ponds that are the home of flamingos, herons, bulls and horses in the wild.

The Camargue Park is the perfect place to explore by bike or on horseback: thanks to the wild and unspoiled nature the experience will be unforgettable.

If you decide to do one Horse ride, know that there are many farms that offer activities suitable even for the little ones or those who have never been on horseback.

Depending on how much time you have and your comfort level, you can choose a horseback riding tour that lasts for just a couple of hours to half a day or a full day. 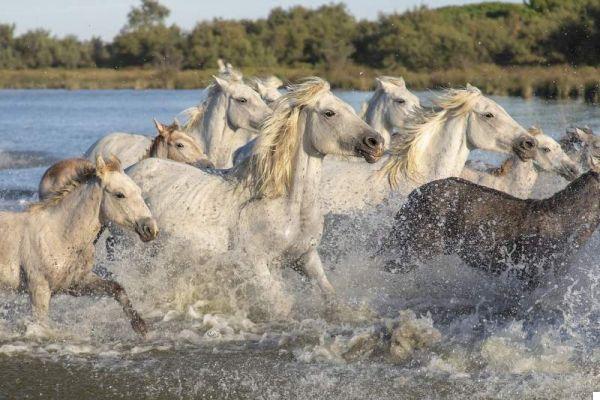 One of the most romantic experiences is a walk on the shore at sunset.

If you prefer cycling to the horse you will have no problem getting one bike for hire: in all the centers of the area you will find stations for renting bicycles and getting around. Among the most interesting routes are the Cacharel path and Circuit Dromar.


To visit the Camargue Regional Park, my advice is to go to the Centro Visite di Pont de Gau to gather information and organize yourself in the best possible way also according to the various activities planned during your stay in the area.

Here, too, is the Ornithological Park of Pont de Gau, a series of paths through which you can admire many species of birds up close.

The Camargue Park can be visited by bike, on foot, on horseback, but also by boat.

4 - Observe the flamingos at the Pont de Gau Bird Park 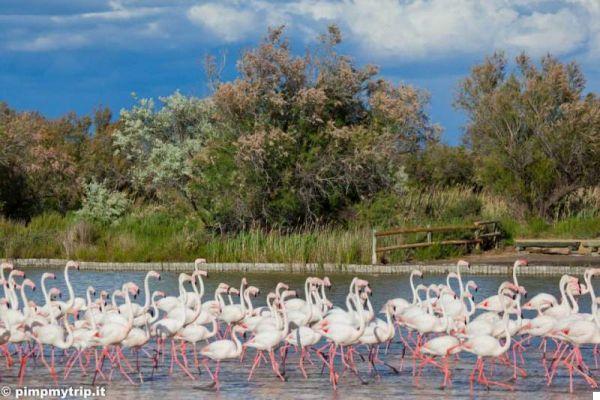 Pink flamingos have been breeding naturally in the Camargue for centuries, but since 1972 a specially created artificial island (Pond of Fangassier) has protected the reproduction of this species and every year between April and September it is possible to see up to 15.000 pairs of pink flamingos and their young.

If you do not have time to visit the Etang du Fangassier and you are on the side of Saintes Maries de la Mer, you can go directly to the Ornithological Park of Pont de Gau which has an entrance ticket but offers the best and most structured way to see flamingos.

This small park is a sort of Mecca for all birdwatchers: in addition to pink flamingos, the Camargue is home to countless species of birds thanks to its climate, especially during their winter migration south.

If you visit the park in the evening, you may have the opportunity to witness the feeding of the flamingos. 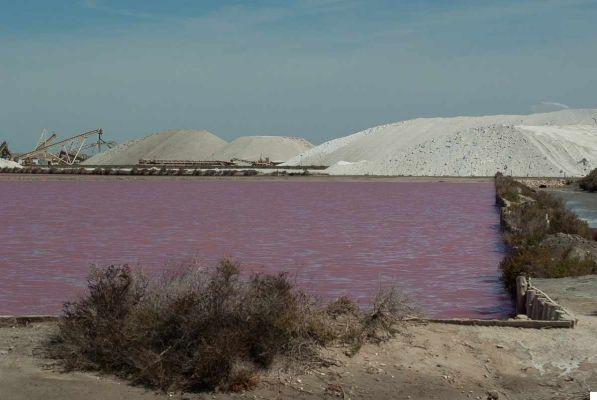 Le Giraud saltworks they are located in the province of Arles and are characterized by an incredible pink color.

The first stop that I recommend you not to miss is the observation point near the parking lot, from here you can start walking through the canals connected to each other by wooden walkways that connect the various areas of the salt pan.

If you are interested in a guided tour, then you could contact theTouristic office which organizes daily guided tours to find out how the salt harvest takes place.

6 - Stroll on the Plage de Piémanson

La Piémanson Beach it is considered one of the wildest and most unspoiled beaches in France and stretches for a good 25 km.

If until a few years ago the beach was besieged by campers and campers, today the government is trying to stem the phenomenon of wild camping to give the beach its freedom and natural beauty. It is no longer possible to enter the beach with motorized vehicles and camping is prohibited.

This means that you can walk on the seashore in total tranquility and relaxation.

7 - Relax on the Espiguette Dunes

If you are planning to discover another of the Camargue beaches, then you will have to go to the Espiguette beach, south of Port-Camargue and Le Grau du Roi.
The large dunes, which can even reach 10 meters in height, are almost reminiscent of a desert.

This beach is particularly popular with surfers who, thanks to the wind beating it, enjoy chasing the perfect wave.

If you want to find an even wilder corner, head towards the lighthouse de l'Espiguette: you will have to walk a bit among the dunes, but the landscape will reward you for the effort made. 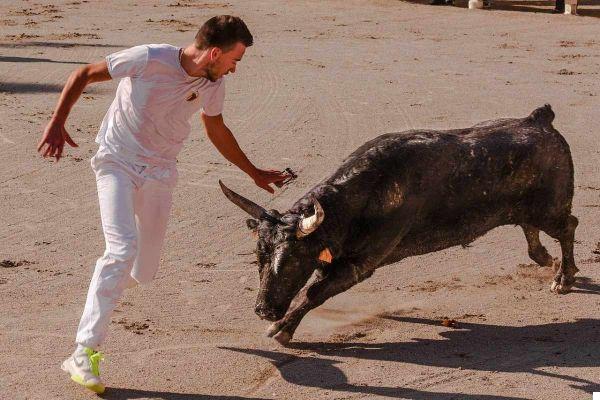 Forget the bloody Spanish bullfights: here there is no blood, no deaths!

In fact, in the Camargue the bull (which in the Camargue is actually more often an ox) is king: here he is the one who is honored, he is a true hero to the point that some of them can even make a career and become real stars.

La Camarguese race (Course camarguaise) is a show much loved by locals and tourists and takes place with non-professional bullfighters (raseteurs). Men must try to steal from the bull, with a tool similar to a comb (the crochet), the rosettes and the laces placed on the head and on the horns.

The raseteurs are helped by the tourneurs, other participants in the game whose job is to distract the bull.

In summer, in July and August, the arenas of Arles they organize Camargue races every Wednesday and Friday at 17.00. 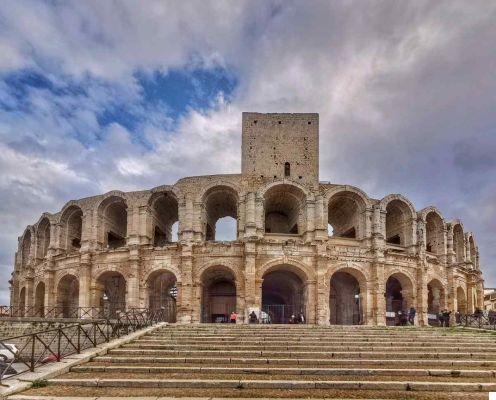 Arles has a rich history dating back to Roman times when it was an important capital of the Roman Empire, earning it UNESCO World Heritage status.

More recently, the post-impressionist painter Vincent van Gogh he called Arles home from 1888 to 1889 and created more than 300 works of art during this period. The city celebrates its former presence in many ways!

One of his favorite paintings, the Terrasse de Cafe La Nuit, was painted right here and the café that Van Gogh portrayed still exists (it's on the Place du Forum and obviously one of the most photographed places on Instagram!)

In July, the city hosts the annual Les Rencontres d'Arles photo festival as it has since 1970, but Arles is fabulous to visit at any time of the year!

There are so many things to do and see in Arles. Among those you can't miss are:

Arles amphitheater: Arles' most famous attraction, the Arles Amphitheater (or Arènes d'Arles) is a must see for all visitors to Arles. Built in AD 90, the amphitheater housed over 20.000 people during its heyday and offered entertainment such as chariot racing and gladiator battles to local residents. Bull fights still take place today in the arena during the Feria d'Arles!

Ancient Roman theater: an ancient theater which dates back to the 1st century. It was built during the reign of Emperor Augustus, shortly after the founding of the Roman colony. There isn't much left of this ancient theater today, but it's worth a visit.

Republic Square it is located in the center of Arles and is easily identified by the obelisk in its center. Place de la Rupublique houses the St. Trophime church with its magnificent cloisters, the chapel of Sant'Anna and numerous shops.

Camargue Museum: opened in 1979 in a refurbished sheepfold, the museum is certainly a great first stop on your visit to the Camargue. It tells the story of the Rhone river delta and the evolution of the land, traditions and people of the Camargue.

10 - Attending a game of pétanque

Finally the last tip on what to see in Camargue what I want to give you is to stop and watch a game of pétanque.

In any town in the area you will be able to spot some white-haired ladies playing bowls: stop and observe.

This is one of the area's favorite pastimes and one of those experiences that make a trip complete. Take an example from the other spectators, order a glass of pastis, the aniseed liqueur, and enjoy the moment!