The Palace of Knossos and the Legend of the Minotaur

Il palace of Knossos (Knossos) rises on the heights of Kefala, 5 km from the center of Heraklion, the capital of Crete, and can also be easily reached by taking bus number 2 which connects the port of Heraklion with Knossos every 20 minutes.

It is assumed that the ancient inhabitants chose that position for its proximity to Mount Ida, a sacred place where, according to their cult, Zeus was hidden by his mother Rhea so as not to have him devoured by his father, the titan Cronus. 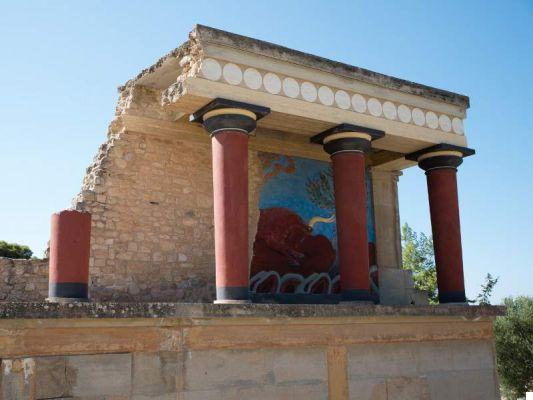 A partially reconstructed colonnade at the palace of Knossos

Below you will find 2 options of Skip-the-line tickets and guided tour:

History of the palace of Knossos

Knossos is the largest of the Minoan palaces and besides being of a religious nature, it was the political and economic center of the Minoan maritime empire. In fact, it has been ascertained that it had two ports corresponding to where Iraklio and Amnisos now stand, reachable via the Katsaba river, which in Minoan times was called Kairatos and presumably was navigable and flowed in front of the palace.

Being without fortification walls, it is assumed that it had no enemies from which to defend itself, and this leads to formulate new questions as it is not clear whether Knossos held supremacy over the other palaces or were all independent from each other, or even if he was alone. a sacred place to perform ceremonies. 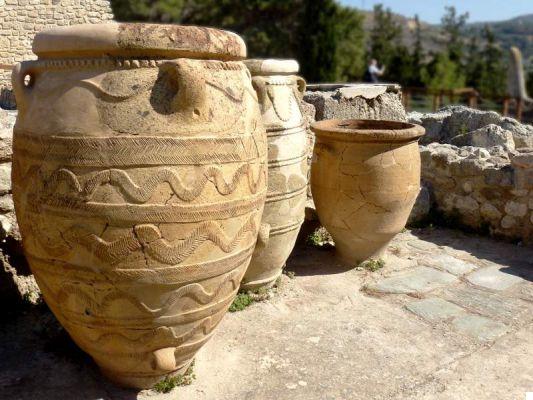 The palace of Knossos was built on the ruins of an older building built around 2000 BC and possibly demolished by an earthquake around 1628 BC, due to thevolcanic eruption of Thera, the current island of Santorini.

The living space of the new complex included an area of ​​about 20.000 m² with the accommodation of the king, queen and administrative officials, halls for worship and receptions: 1300 rooms spread over 5 floors with a very intricate plan where it is estimated that about 12.000 people could be housed, whose central area consisted of a clay court where the performances of the gymnasts who defied death took place by pirouetting on bulls, sacred animals for the Cretans, as evidenced by the numerous frescoes found in the palace.

Famous are the bathrooms of the apartments of the queen, equipped with underground channels, sewers, drainage channels, hot water always available which, in the opinion of scholars, would be the most advanced of the ancient age. 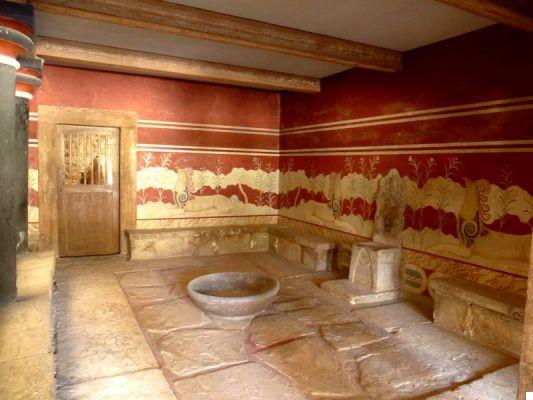 The royal bathrooms with an advanced sewage system

At the entrance to the palace you will find the bronze half-bust of Sir Arthur Evans, archaeologist and director of the Ashmolean Museum in Oxford, who is credited with the discovery of Knossos, even if the real discoverer was Minos Kalokairinos, an antiquarian, trader from Iraklion, who in 1878 brought to light two of the palace's warehouses, different containers for provisions and objects of worship, but he was forced to put an end to the searches by the owners of the land: the Turks, in fact, demanded a large sum to authorize the continuation of the excavations.


Evans began to excavate systematically in 1900 after the proclamation of the island's autonomy from Turkish rule and by 1903 almost the entire building had been unearthed and excavations continued in the surrounding area at a rapid pace until 1931, with an interruption during the WWI. 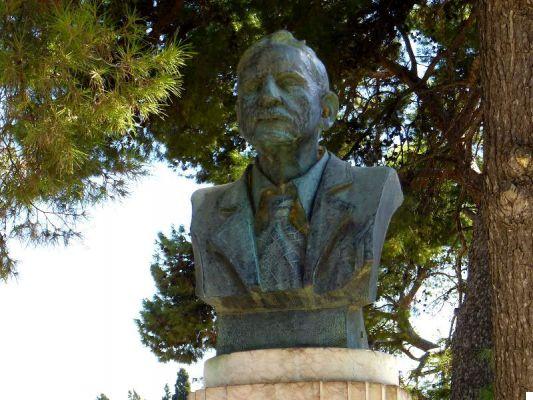 The speed and methods adopted by Evans to restore the ruins, using reinforced concrete to reconstruct some parts, then colored in an arbitrary way to give the visitor an idea of ​​what the palace was like at its maximum splendor, has been criticized by many because of the '' use of materials unrelated to Minoan architecture, giving rise to disputes by various scientists also regarding the conclusions drawn by the archaeologist, especially with regard to the name of the various rooms as well as the "palace" of the complex, which presupposed safety diagnosis not always proven or documented.

Despite everything, however, Evans achieved great acclaim from the general public thanks to the intuition, creativity and deep scientific knowledge that distinguished him. In fact, we owe to him the discovery of the splendor of the Minoan world, to which he himself gave his name inspired by Greek mythology and in particular by legend of king Minos. 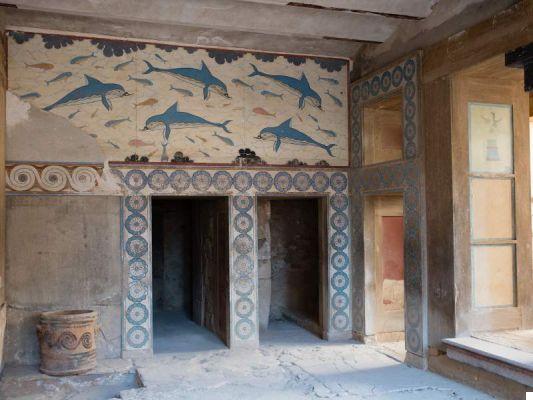 Legend of the Minotaur

La legend of the Minotaur tells that the labyrinth was designed by the Athenian architect Daedalus helped by his son Icaro, who found themselves prisoners once the construction was finished. Daedalus then built wings that he attacked with wax behind them and they both flew out.


The labyrinth was commissioned by the King of Crete, Minos, to enclose the monstrous Minotauro, with a human body and bull head, born from the union of the king's wife, Pasiphae, with the white bull sent to the king by Poseidon to be sacrificed in his name. However, he offended the god: considering it too beautiful and sacrificing another bull he unleashed Poseidon's revenge which induced a mad passion for the animal in the queen. 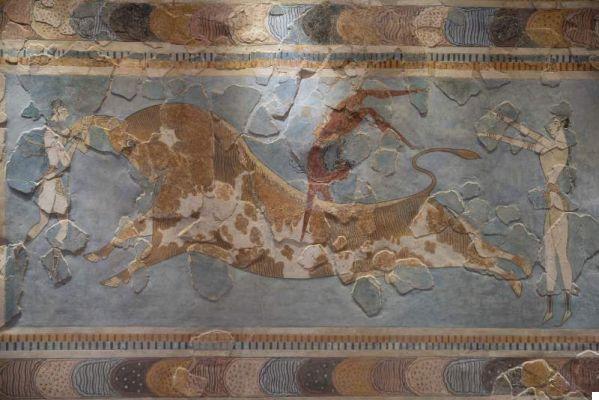 Fresco “Tauromachia”, the legend of the Minotaur

Athens, subjected to Crete, was obliged to send seven boys and seven girls every nine years to be fed to the Minotaur. This tribute was imposed by King Minos to avenge the death of his son Androgeus, murdered by some Athenians who were angry at the dishonor caused by his too many victories at their own games.

Years later, Teseo, hero and son of the Athenian king Aegean, he embarked infiltrating among the young people destined for sacrifice and once he arrived in Crete, he wooed and made people fall in love with himself Arianna, the daughter of Minos and Pasiphae, who after consulting Daedalus, helped the boy find his way out of the labyrinth with the hope of escaping with him, giving him a ball of red wool to unroll during the journey and thus allowing him to follow back the path.

Theseus killed the Minotaur and led the other Athenian boys out of the labyrinth, but he did not keep his promise and abandoned the girl. The betrayal did not go unpunished: Theseus forgot to raise the white sail as he had promised his father in case of victory, so when he saw on the horizon the black sail synonymous with defeat and death of his son, he threw himself into the sea, killing himself and thus giving name to the Aegean Sea. 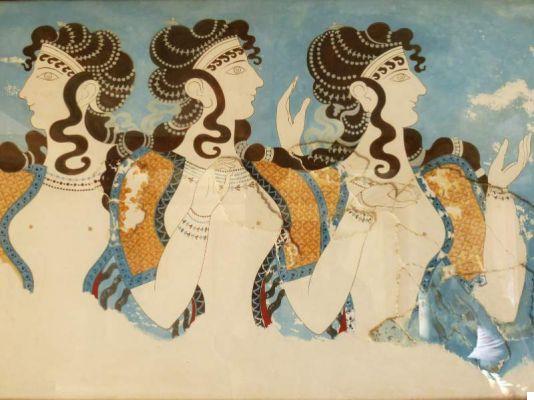 The Palace of Knossos

The architectural structure was so intricate and irregular that Evans led Knossos back to the myth of the labyrinth inhabited precisely by the terrible Minotaur. Theory supported by many archaeologists who believe that the legend was born right here, where the monster was impersonated by a priest with a bull-shaped helmet on his head.

Furthermore, the palace was called the house of the double ax, as the symbol of the palace was a double ax engraved on the walls and roofs whose translation in ancient Greek corresponds to the word Labrys from which the term labyrinth derives.

Nevertheless, there is no evidence of the presence of King Minos and, in hindsight, not even of a different king and on this point there are many questions that do not have an answer: some hypothesize that it was only a temple, others that it was a necropolis, still others that the Minoan one was actually a matriarchal civilization as many of the frescoes portray handsome women in the foreground with small, ugly men in the background.

With the data collected to date it is not possible to give certain answers. 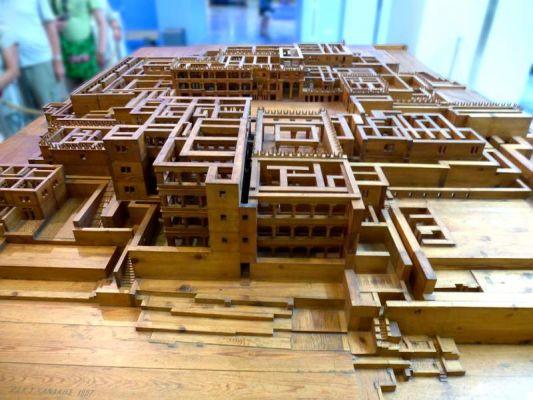 Model that reproduces the palace of Knossos in its entirety, on display at the archaeological museum of Iràklio

Another reason for the dispute regarding Evans was the replacement of the marvelous frescoes found during the excavations with copies. To admire the originals, some only partially recomposed, you have to go to the marvelous Archaeological Museum of Heraklion, located in via Xanthoudidou 2, in the center of the city of Iràklio.

The museum is one of the largest in Greece and preserves artifacts from the Minoan civilization such as various rythoi, libation vessels used in religious functions, among which the one in black soapstone in the shape of a bull's head and the one in the shape of a lioness stand out; the statuette depicting the goddess of snakes; the statuette depicting an athlete in the act of jumping on the bull, several models and reconstructions of the main Minoan palaces. 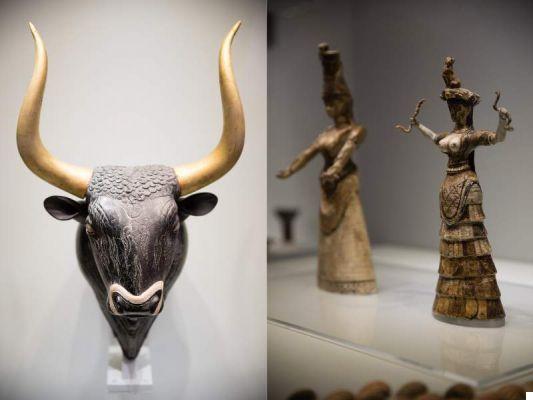 Left: rythoi in the shape of a bull's head. Right: statuette depicting the goddess of snakes

The frescoes from Knossos exhibited here are: Bullfighting; Procession with musicians; The blue ladies, probable court ladies dressed sumptuously; the dolphins from the apartment that Evans identified as reserved for the queen; La Parisina, a fresco named after Evans, depicting a young priestess; the blue bird; the monkey collecting crocus flowers; the officer of the guard of the Moors; the dancer, fresco from the queen's apartments.

One of the most important and famous is the Prince of Lilies, whom Evans had portrayed as a priest-king, as he needed a king to substantiate his theory that the palace of Knossos had belonged to Minos. It is the largest of the single-scene male portraits, but from the archaeologist's own writings it seems that the parts that compose it actually belong to three different images recomposed to form a single figure. 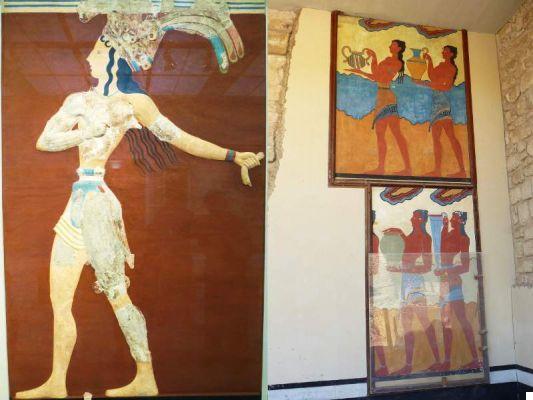 Left: fresco "Prince of the lilies" exhibited at the museum. Right: frescoes visible on the archaeological site of Knossos