Towers of the Sagrada Familia: Your Complete Guide

Five million people visit the Sagrada Familia in Barcelona every year. Most of these five million tourists have two questions:
1 - Is it worth climbing the Towers?
2 - Tower of the Passion or Tower of the Nativity, which one should I choose?

The Sagrada Familia is the symbol of Barcelona par excellence and is one of the most visited monuments in the world. The tourists who decide to visit it every year are millions.

The masterpiece designed by Antoni Gaudí fascinates with its unique shapes and the history of its construction which has lasted for more than 100 years.

The most interesting part of the visit is certainly the one dedicated to the inside of the Church: the naves, the 45 meter high vault and the columns that resemble tree trunks leave you speechless.

However, there is also another fascinating experience to live inside the Sagrada Familia: the ascent to the Towers. Through this post I want to give you some advice to help you decide if it is really worth going up to the towers of the Sagrada Familia.

The rest opt ​​for the guided tour with professional guide with access to the Tower, more expensive but definitely a great option.

The Towers of the Sagrada Familia 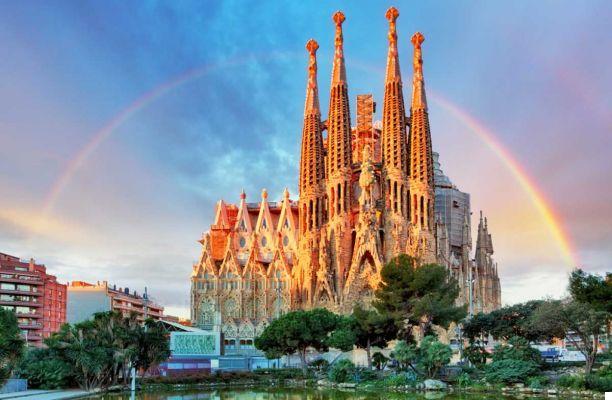 Antoni Gaudí designed the Sagrada Familia so that the Church was visible and recognizable from anywhere in Barcelona. This is why its Towers are so important.

Le Towers of the Sagrada are 18 12 of which are dedicated to the apostles, 4 to the evangelists, one to the Virgin Mary and one to Jesus Christ.

The towers have a different height from each other and the highest will be the tower dedicated to Jesus (172,5 meters).

The towers also serve as bell towers and the Sagrada Familia will have to contain 84 bells.

At the moment only 8 towers of the 12 planned dedicated to the apostles have been built. Four towers are located along the facade of the Nativity and another four along that of the Passion.

The Sagrada Familia, in fact, presents 3 sides and each of these is designed for tell the story of Christ and Christianity.

The Facade of the Nativity

La Facade of the Navità it is dedicated to the birth of Jesus: it tells the joyful and familiar aspect of his life and for this reason it presents lively and popular decorative elements.

The facade is divided into three portals which are dedicated to the 3 theological virtues: Hope, Faith and Charity. In the center is the Jesus Gate dominated by the Tree of Life.


The 4 towers that rise from the Facade of the Nativity are dedicated to San Mattia, San Giuda, San Simone and San Barnaba. 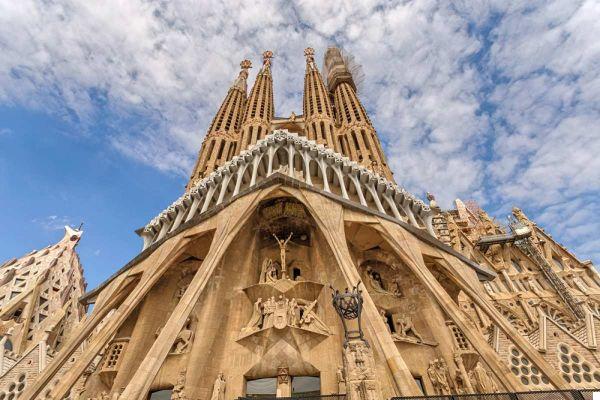 La Facade of the Passion it is designed to accompany reflection on Christ's suffering and his crucifixion as a ransom for man's sins. For this reason Gaudí thought of an austere and simple facade in which the bare stone with hard lines almost resembles a skeleton.

This facade also has 3 portals dedicated to Faith, Hope and Charity.

The 4 towers are dedicated to the apostles Giacomo the Minor, San Tommaso, San Filippo and San Bartolomeo.

The Facade of Glory

La Facade of the Glory it is the main one of the Church and will be the largest. This facade is dedicated to the path to God and the heavenly glory of Jesus Christ.

Gaudí, aware that he would never have carried out this part of his work, left only a sketch of the project for this facade, leaving the task to the architects who would come after him.

Work on its construction began in 2002.

Is it worth climbing the Sagrada Familia Towers?

At this point you will want to know if it is worth climbing the Sagrada Familia Towers.

My answer is it depends. It depends on your budget, on the time you have available and, above all, on you. In fact, you may suffer from dizziness and not be comfortable with height or suffer from claustrophobia and fidget on the descent along the narrow spiral staircase.


Before talking to you about this, however, I would like to explain to you why it is worth climbing the Towers of the Sagrada Familia for live a complete and unrepeatable experience.

The view from the top is fabulous

From the top of the towers of the Sagrada Familia you will have the opportunity to enjoy some beautiful views of the Barcelona city, but the most interesting thing is the chance to observe Gaudí's work from above. In fact, you will be able to admire the intricate interplay of lines and architectures and you will also be able to keep an eye on the continuation of the works!

The descent is an unforgettable experience

To reach the top of the towers of the Sagrada Familia you take an elevator, but to go down you have to go up a narrow spiral staircase. For some it may be a problem, but in reality the descent is fun and will give you the chance to discover the true structure of Gaudí's masterpiece.

It doesn't cost much more than the standard ticket

With a difference of approx 14 € between the normal standard ticket and the ticket that includes the visit to the towers, honestly in my opinion it is worth buying the second one. In short, personally for 14 euros I would not want to remain with the doubt or, even worse, the regret that I missed something beautiful.

What to know before climbing the Sagrada Familia Towers? 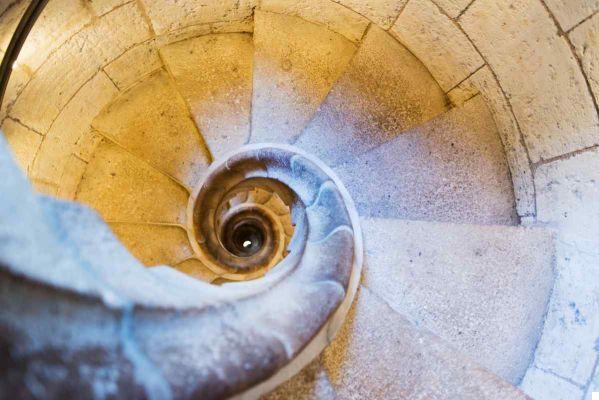 Here are some more advice on what to know before climbing the Towers of the Sagrada Familia:

Most tourists, in fact, say that the view over the city is more beautiful and that the stairs leading down are a bit wider.

The truth is that there is no better view than the other, because the views from the two towers are completely different and it is impossible to make a comparison. In fact, from the tower of the Nativity you can enjoy the panorama of the city of Barcelona crowned by the mountains, while from the Tower of the Passion a large part of the panorama overlooks the blue waters of the Mediterranean.

In addition, the tower of the Nativity was built while Gaudí was still alive so you will have the opportunity to experience the original work of the Catalan architect. This also means that its construction is finished and that you will not have the view obscured by the scaffolding of the works.

The completed works also allow you to move on the bridge that connects two towers of the facade, allowing you to closely observe the details and decorations of the architecture.

Finally, going down the stairs you will have the opportunity to stop several times on the balconies to once again admire the details of the tower up close.

Online tickets for the towers 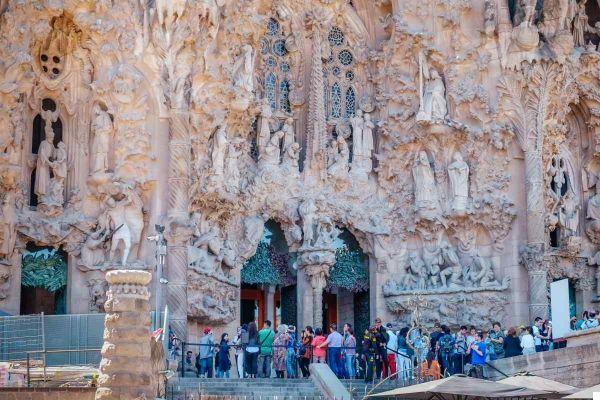 Here are some things you need to know before booking your Sagrada Familia Tower tickets.

I online tickets are cheaper of those at the ticket office, this is because there are no maintenance costs.

All the tickets that I recommend and that you buy online are "Skip the line", that is, they help you skip the lines famously infinite of the Sagrada Familia. Also, buying tickets online means you can enter fromreserved entrance of the facade of the Nativity in C / Marina where there is also the metro stop.

You won't always be able to choose which tower to climb: it depends on a series of factors including the huge number of visitors in summer or the continuous renovations.

I Online tickets can be purchased from various portals: from the official website, through the website of the Barcelona tourism board, through the partner portals.

Sometimes (but not always) tickets sold by third party sites have 2 euros more commission than the official site (while the official site is only in Spanish, English). Personally, I always prefer to understand well what I am buying and therefore I prefer them.

These below are the tickets with a visit to the simplest towers. You will have to enter the visiting time which is the time of entry to the Basilica.

Tickets that include a visit with a professional guide are more expensive (of course, there is a real person!), But in the case of the Sagrada Familia it is worth it because allows you to discover Gaudí's masterpiece in detail.

Beware that the professional guide will be with you for the visit to the Basilica, but you will do the towers yourself!

Useful information for climbing the towers of the Sagrada Familia

The Sagrada Familia is open

Metro: the best way to reach the Sagrada Familia is to take the metro. The metro station right in front of the Basilica has stops for line 2 (purple) and line 5 (blue).

Audio Video Towers of the Sagrada Familia: Your Complete Guide
Coffee Tour in Colombia: How It Works and Which to Choose ❯

add a comment of Towers of the Sagrada Familia: Your Complete Guide