Travel to Turkey: what to see and know to make a wonderful holiday

Turkey is a country full of enchantment, with incredible landscapes, colors, scents and sensations, which it gives to everyone an unforgettable vacation or trip. Surely the main destination is Istanbul, a magical city, which has always been a crossroads between Europe and Asia, but all of Turkey is a splendid and very interesting country to visit.

This great country hosts some of the most beautiful and bizarre landscapes in the world, ranging from stunning Mediterranean beaches to majestic snow-capped mountains, stunning green hills and spectacular hinterland rock formations.

The country is located at the center of the symbolic border between Europe and Asia (the banks of the Bosphorus separate Istanbul in two, crossing the two continents). Almost 97% of the territory is on the Asian continent, while only 3% is part of the European continent.

Even today, this nation is among the best travel destinations in the world, thanks to the many attractions it offers, such as the elegant Istanbul, which has one of the youngest populations in the world, modern beaches along the Aegean and Mediterranean coasts, the wealth of historical sites of world importance such as Ephesus, and the unforgettable landscapes of deserted places like the Cappadocia.

Add to all this the typical and tasty Turkish cuisine, the famous bazaars where you can admire and buy a myriad of handicrafts, or a visit to the traditional and characteristic hammams. Turkey is an interesting country for any type of tourist o traveler, unite history, nature, cuisine and well-being in a single journey.

For lovers of sun, beaches and sea, Turkey has a huge supply. From the Black Sea to the Aegean Sea, from the Sea of ​​Marmara to the Mediterranean, its coasts are full of fabulous coves, bays and beaches. In addition, it also has a long bathing season which runs from April-May to October-November in the southern area.

What to visit in Turkey

Turkey is typically described as a colorful blend of eastern and western influences, but it is much more. There considerable diversity from region to region has allowed the country to attract and host all types of travelers, from those looking for a cheap holiday to tourists looking for luxury and all comforts.

If Ankara is the capital of the country, Istanbul it remains the largest and most magical city in the country. It is also the most visited destination in the country for the large number of attractions, places and cultural sites to visit. One of the most beautiful areas to visit is the neighborhood of Blue with its sumptuous religious buildings such as theAia Sophia or the incomparable Blue Mosque. Do not miss the Grand Bazaar, Dolmabahçe Palace and Topkapi Palace. 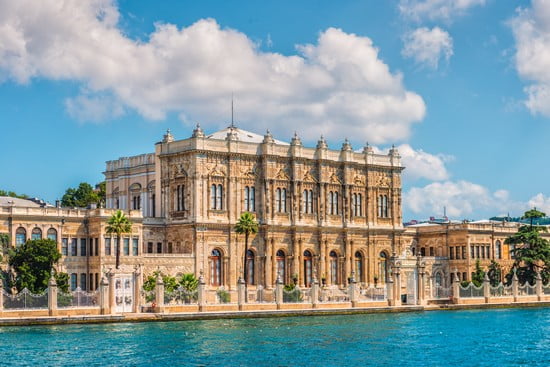 The nation's capital is Ankara, a modern city made up of skyscrapers and distinct cultural sites, such as the Museum of Anatolian Civilizations. In the central region of Anatolia, Konya is known for its extraordinary Seljuk architecture and whirling Dervishes.

The beautiful Turkish Riviera boasts splendid and wonderful seaside towns, such as: Antalya, Belts, Marmaris e Side. These are the most popular seaside resorts on the Riviera, but certainly the main one remains Antalya. With over a million inhabitants and its 9 million tourists annually, it might seem like a crowded city, but it's not. Furthermore, there is a neighborhood, Old City, which always remains quiet and its shady streets are an ideal alternative on hot days.

On the Aegean coast, two seaside resorts are the undisputed "queens" of seaside tourism: Kusadasi e Bodrum. Kusadasi offers a wide choice of accommodation, great entertainment and particularly privileged access to some of Turkey's greatest ancient sites: Ephesus, Pamukkale, Aphrodisias and Pergamon. Bodrum, is the Asian Saint-Tropez, offers a beautiful environment, and above all a nightlife that has nothing to envy to the best European seaside resorts.

Other important tourist destinations in the country are: the ruins of the ancient city of Ephesus; the fairytale landscape of Cappadocia, dotted with the characteristic and fairytale fairy chimneys and the underground city of Derinkuyu.

Various areas of Turkey have a geothermal subsoil. The temperature of the thermal waters of the country ranges from 20 degrees to more than 110 degrees. There are 1.300 hot springs across the country. Difficult to name them all, however the hot springs of Pamukkale they are the most famous. Pamukkale is undoubtedly one of the most spectacular natural landscapes in the world. Unesco World Heritage Site, it is known for its mineral-rich thermal waters that flow along the white travertine terraces. You can also visit the springs of Balcova, Izmir e Cesme. 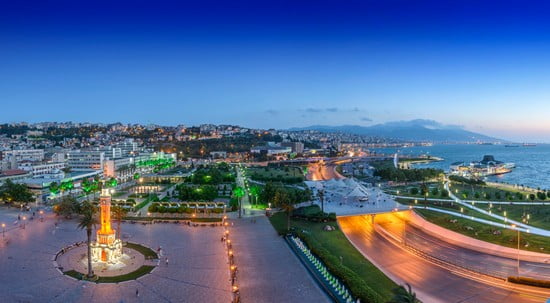 When to go to Turkey

Turkey is a huge country and its climate varies greatly, both from region to region, and according to the time of year or season. To visit Istanbul and the most important ancient and medieval attractions, the best times to go are there spring andautunno, when the days are generally warm and sunny, but not too hot.

Le coastal areas of the Mediterranean and Aegean Seas they are cool and wet in winter, with warm and sunny days in summer. The best period for the coasts of the Aegean Sea is from May to October, while that of the southern coast, bathed by the Mediterranean Sea, is from April to November.

Le central and mountain areas they are quite cold during the winter, with abundant snowfall, making these areas perfect for snow lovers and winter sports enthusiasts. Beware, winter can be very cold in Istanbul, Central Anatolia and Cappadocia.

In summer, take light cotton clothing, comfortable shoes and a scarf for women to cover up while visiting the mosques. In spring and autumn, don't forget the raincoat. In the winter season, however, cover up well with warm clothes.

In Turkey they can find accommodations of all types and for all budgets. These accommodations range from large hotel complexes and resorts, to luxury villas and hotels for those looking for all the comforts and services during a trip or vacation, to many hostels, pensions and cheap hotels for those looking for a low cost trip or vacation. In the coastal tourist resorts there are numerous small trendy hotels with fairly cheap prices.

Find and book accommodation in Turkey 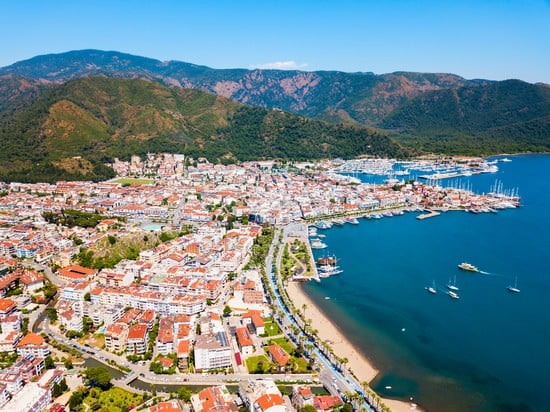 Marmaris in Turkey - Photo from Istock

One of the best things about Turkey are the countless transport options: subways, buses, trains, rental cars, airplanes, ferries along the coast, but also bikes for sports and nature lovers. Here's what you need to know about getting around Turkey.

Flights to and within Turkey

It's easy reach Turkey by plane, thanks to the numerous airlines that connect and this beautiful Asian country. The plane is also a very convenient way to make internal movements, for example to reach the tourist resort of Antalya or the Anatolia area from Istanbul.

Domestic flight prices have dropped and it is the fastest way to get around. A flight from Izmir to Istanbul takes just one hour, compared to a bus ride which can take up to 10 hours.

The main vector is the Turkish Airlines, which provides air travel not only to Turkey, but also to any part of the world. For internal flights the two low cost airlines Pegasus Airlines e Atlasjet they are the economic solution for travel.

All three carriers serve Turkey's main airports - mainly the airports of Istanbul, Ankara e Antalya. The other airports and smaller ones also have a good air connection service.

Renting a car is relatively easy, all you need is an identification document, such as a passport and driving license. Some car rental companions may also require a credit card, so inquire well before booking your car rental.

In Turkey you drive on the right. The highways, main roads and roads in the city are quite good, but in some small towns or villages they can be a bit neglected.

Find and book a car rental in Turkey

The train journey is little used by tourists, even if it can be a beautiful and interesting experience. If you are visiting Istanbul, one of the best and safest ways to get around the city is by using the tram that runs from the international airport through the main areas of the city. It is cheap and easy to use.

Buses or coaches are widely used for long distance journeys (more than four hours) across the country, while Dolmus (small minibuses) are used for shorter journeys. The buses are very luxurious, of European standards and the price is incredibly affordable.

In addition to being a very convenient way to move around the center of Istanbul, the bike is also widely used by naturalist travelers with sleeping bags. Scooters and motorcycles are a favorite of young and adventurous travelers, and are relatively inexpensive and easy to rent.

Ferries are another popular mode of transport, particularly around Istanbul, the Bosphorus, around Izmir and from the tourist resorts of Bodrum and Marmaris to nearby Greek islands.

Italian citizens do not need a visa if they travel for tourist reasons and the maximum period allowed is 90 days within 180 days. As a document you can use the passport or identity card, with a minimum validity of 5 months.

For more and updated information on the documents necessary to enter Turkey, and for other useful advice, inquire on the site Safe traveling. 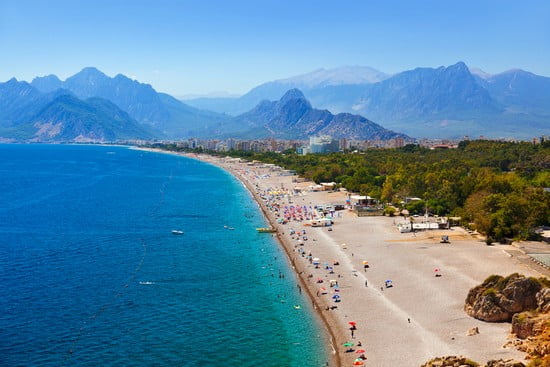 Antalya Beach, Turkey - Photo from Istock
Visit to the Tower of London: timetables, ticket prices and how to get there ❯

add a comment of Travel to Turkey: what to see and know to make a wonderful holiday