Rovaniemi is the main tourist destination in Lapland and one of the main ones of the Finland. Nicknamed the city of Santa Claus, it enjoys one of the most beautiful winter landscapes of the Scandinavian countries. The city is located about 6 kilometers south of the Arctic Circle, between the hills of Ounasvaara and Korkalovaara, near the Kemijoki and Ounasjoki rivers.

The area's unspoiled nature and numerous recreational opportunities make tourism the main economic source of Rovaniemi. The city has numerous hotels and restaurants located both in the center and on the outskirts of the city. During the year the city hosts over half a million visitors.

When to go to Rovaniemi

I better times to visit Rovaniemi are in midsummer or midsummer, especially in December and during the Christmas and New Year holidays. These are also the peak and peak seasons, where flights and hotels have the highest prices. If you want to save better the mid-seasons, such as autumn and spring.

Due to its location near the Arctic Circle, Rovaniemi has a subactic climate with short and pleasant summers, while winters are long, cold and snowy. The month of December has an average of just under six minutes of sunshine per day. Winters are somewhat mitigated by the sea air from the North Atlantic current, which ensures that average temperatures are not extremely low, as an area with such latitude in the northern hemisphere can normally be.

How to get to Rovaniemi

The nearest airport is Rovaniemi, located about 10 kilometers north of the city. They are not here flights direct from the airports to Rovaniemi. However, from all airports with a stopover it is possible to reach the "capital" of Lapland.

Transfers within the territory of Lapland can be made by train or bus. The services are very efficient and punctual, even if the cost of transport is a little higher than that.

What to see in Rovaniemi

Rovaniemi is considered the official city of Santa Claus. Near the city, about 8 km from the center, there are the Santa Claus Village and the Santa Park theme park, corresponding to the imaginary line of the polar circle.

The SantaPark theme park hosts various attractions and is only open for a short time of the year. This year theaperture will be from 9 November 2019 to 11 January 2020. The opening hours are from 10 am to 17 pm (or 18 pm on certain days) in the evening.

The distance between Rovaniemi and the SantaPark theme park is 8 km and you can reach it with the Santa’s Express bus, a bus service that takes approx 15 minutes.

One of the main attractions of Lapland to be able to see in the winter period they are the Northern Lights, an extraordinary celestial phenomenon that occurs at latitudes far north, practically in the Polar Circle.

Other places to see

Other things to see in Rovaniemi include:

What to do in Rovaniemi

In addition to numerous excursions, in the winter you can practice all around the city winter sports. Close to the city is the Ounasvaara Ski Center, one of the main ski resorts in Finland.

Where to sleep in Rovaniemi

It is advisable to sleep and book a hotel in the city of Rovaniemi. From here it is possible to do all the excursions and leave for the various tours of Lapland. In addition, the offer is very wide and varied with almost 300 hotels, lodges and bed & breakfasts present in the city.

For those who want to live a completely fairytale experience, they can stay near the SantaPark theme park at the Arctic TreeHouse Hotel or in the Santa Claus Village area in one of the following structures: il Santa Claus Holiday Village, Glass Resort, Nova Skyland Hotel or Santa’s Igloos Arctic Circle.

Search for hotels in Rovaniemi 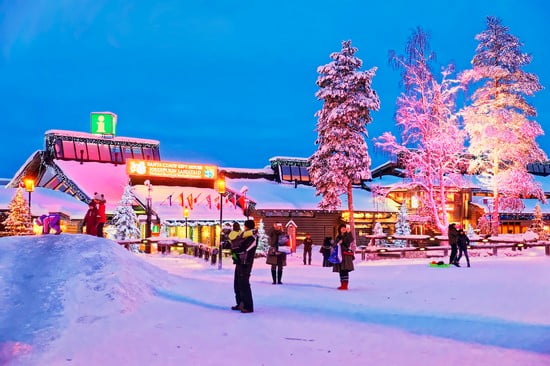 Rovaniemi, Finland - Foto da Istock
Travel by ferry between the most beautiful islands of Thailand ❯

add a comment of Trip to Lapland in Rovaniemi, between Santa Claus Village and Northern Lights