Visit to the Cathedral of Seville: Information and Curiosities

La Seville Cathedral and the Giralda (its bell tower) are among the most important historical monuments of the Andalusian city of Seville.

The great church and its bell tower have been declared a World Heritage Site by UNESCO and today are a must for tourists visiting the city.

In this post you will find all the useful information to plan your visit.

Seville Cathedral and Giralda: a bit of history

La history of the Cathedral of Seville and the Giralda has its roots in distant times.

In 1182, the mosque of al-Moharrem was inaugurated on the land now occupied by the Church. The building, however, less than 100 years later, in 1248, passed into the hands of the Christian archdiocese of the Kingdom of Seville who wanted to erect a new and splendid church.

In 1433 the demolition of the mosque began and immediately began to build what would become one of the largest Gothic churches in the world.

The masters Ysambret and Carlín designed a majestic building capable of reflecting the desire to build a church never seen before.

Si racconta che a Siviglia si sayesse: “Let's do a work so great and so great that future generations will take us for crazy”.

That work was completed and the Cathedral of Seville, 116 meters long and 76 meters wide, was consecrated in 1507. Of the great mosque built a few centuries earlier, only the minaret remained, today's Giralda.

Read also: what to see in Seville in 3 days 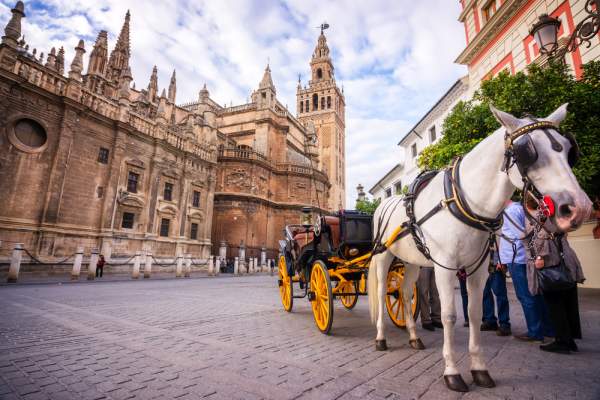 Il ticket price of the Cathedral of Seville it includes a visit to the Church, the Sacristy, the Chapter Hall, the Treasury, the Giralda, the Patio de los Naranjos and the Church of Salvador which is located 600 m from the Cathedral in Salvador square.

Getting to the Cathedral of Seville it is very simple and the best solution is to take advantage of a walk in the historic center.

Alternatively you can take: 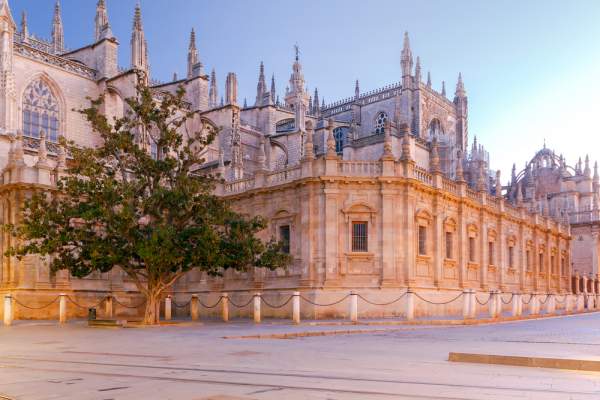 The cheapest tickets for the Seville Cathedral are sold online. Tours and combinations with the Real Alcazar are great options. Free admission is possible on Mondays.

The ticket for the Seville Cathedral costs:

The basic ticket includes admission to every part of the cathedral: the interior of the cathedral, the sacristies, the chapter house, the treasury, the Giralda bell tower and the orange courtyard.

It also includes entrance to the Church of the Divine Savor (El Salvador), a large Baroque church a few blocks north of the cathedral.

Here you can buy the combined ticket Skip the line of the Cathedral, Giralda and Alcazar

Tour of the Cathedral and the Giralda 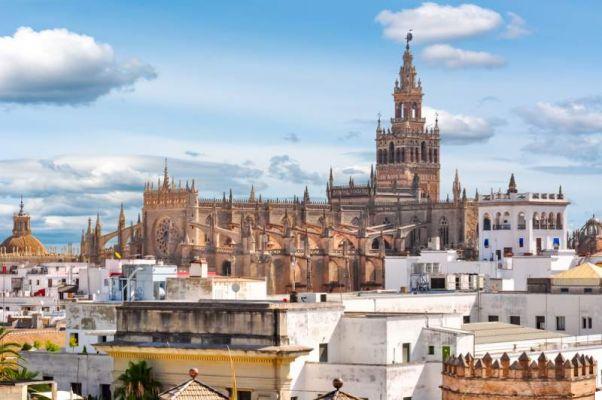 There are many tours offered by agencies. Personally, I almost always recommend a guided tour when it comes to places of art and culture: having a real guide at your disposal helps us to discover many details and curiosities that otherwise we would never come to know.


Basic Seville Cathedral Tours typically last 60, 75 or 90 minutes but at the end of the tour it is possible in most cases to stay longer in the Cathedral if desired.

The best choice in my opinion is to buy a combo tour that also includes the Real Alcazar.

☞ Click to view guided tour of the Cathedral in English

If you have decided to visit the Cathedral of Seville and the Giralda you may be interested in attending a guided tour so as to be able to appreciate all the treasures kept inside. Below, however, I'll explain what to absolutely see during your visit.

The visit should last from 90 minutes to 2 hours.

What to see inside the Cathedral of Seville 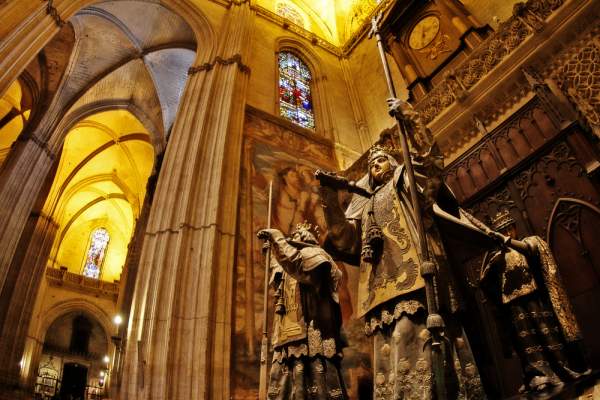 The interior of the Church fully reflects its Gothic style and is composed of five aisles that make up a rectangle perfectly. There plan of the Cathedral of Seville is identical to that ofAlhambra of Granada.

Its size really leaves you speechless.

La central nave is gigantic and joins the choir, flanked by the organs, with the Cappella Maggiore where is the altar.

The nave has another peculiarity: it is divided into three sections corresponding to the medieval social classes. We therefore have the nave of King Ferdinand III, the cross (it is the section with the highest vaults) and the back-choir.

The three parts referred to the positions occupied during Masses: the first was reserved for kings, the second for clergymen and, finally, the third was for the people.

Inside the Cathedral there are well 25 chapels. Those worthy of note are 3: the Royal chapel Capilla Mayor and Chapel of San Andrés.

Inside the Main Chapel there is the largest retable (the altarpiece) in the world: it was started by Pedro Dancart and it took 82 years to complete it, from 1482 to 1564.

It is an incredible masterpiece that leaves you full of wonder!

The Tomb of Christopher Columbus

La Tomb of Christopher Columbus it is certainly one of the main attractions for those who decide to visit the Cathedral of Seville.

The location of Columbus' remains has always been much debated. A few years ago, however, after careful analysis, including the comparison of DNA with that of the certain remains of Columbus's brother, they showed that remains preserved inside the Spanish Cathedral certainly belonged to the explorer.

The monument represents four figures (to represent the four Kingdoms of Spain) that support the coffin.

The Sacristy of the Chalices and the Capitolare Room

Inside the Church there are numerous works of art and some of the most important find space in the magnificent Cathedral Treasury.

Within the Sacristy of the Chalices you can admire some beautiful religious paintings. Among all it stands out Santa Justa e Santa Rufina by Goya.

Inside the Chapter House, on the other hand, it is located La Immaculada del Murillo.

La Cubierta de la Catedral (The roofs of the Cathedral)

La ascent to the roofs of the Cathedral it is a truly unique experience.

The visit is guided and will allow you to discover the history of the Church and its construction through a different and characteristic perspective. In addition, from the top of the Cathedral, you will be able to admire a beautiful view of the city.

The ticket for the visit to the roofs of the Cathedral costs € 15 and includes a guided tour of about 90 minutes and the possibility of visiting the interior of the Cathedral.

What to see outside the Seville Cathedral 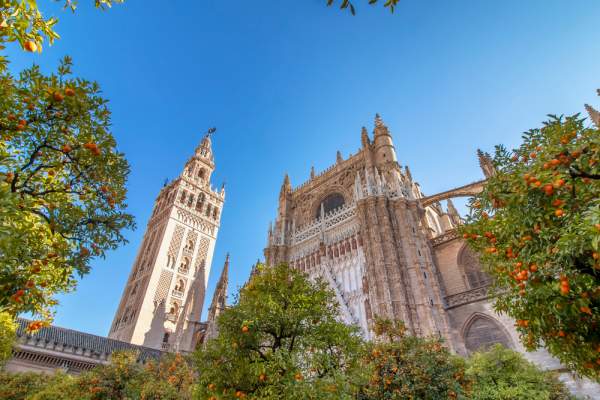 Your visit to the Cathedral of Seville cannot be said to be complete until after spending some time outside the Church to fully appreciate its beauty.

On the main facade it is almost obligatory to stop and observe the three masterfully decorated doors: the Gate of the Assumption Birth Gate and Baptism Gate.

Il Patio de los Naranjos it was built starting in 1172 and originally served as the ablution courtyard for the ancient mosque. Today it is located outside the Church and has the function of Cloister.

From the street you enter it through Door of Forgiveness, an original door of the al-Moharrem mosque. 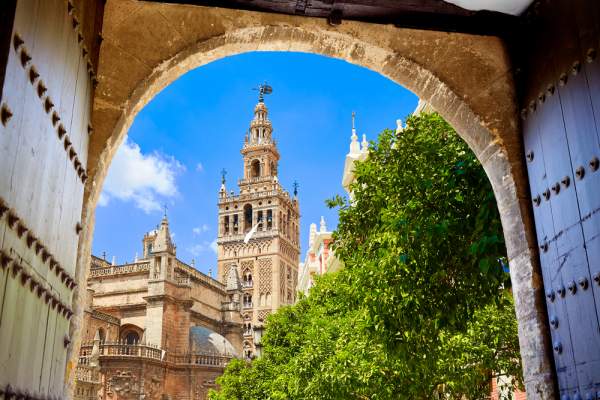 After seeing the Cathedral you can dedicate yourself to visit of the Giralda, its bell tower.

The Giralda of Seville is the ancient minaret of the Mosque, it is almost 105 meters high and its base measures around 13 meters per side: as for the Cathedral, its imposing dimensions cannot but amaze the visitor.

Its construction began at the end of 1100 and in the following centuries its waiting was renewed several times.

At one time there were bronze spheres on the top, but since 1568 you can see El Giraldillo, a statue representing the Triumph of Faith. In reality, the real name of the statue was Giralda, because it was spinning in the wind. Over time, however, this word began to be used to refer to the entire bell tower: the Giralda of Seville.

Inside the tower there are no stairs, but 34 ramps large enough to allow the passage of two men on horseback. These, in fact, allowed the muezzin to climb the tower on horseback to sing the call to prayer.

The Giralda of Seville still represents an incredible example of Islamic art, able to amaze, intrigue and surprise anyone visiting the Andalusian city. The lower part has remained the ancient one, while, looking up you will recognize the most recent neo-Gothic style that refers to that of the Cathedral.

Curiosities about the Cathedral

In the case on where are the remains of Columbus, there is actually a lot of uncertainty. He died in Valladolid (Spain) in 1506 and was buried there for the first time. Then, his remains were transferred to the Monastery of Santa María de las Cuevas (today Center of Contemporary Art), from there to the island of Hispaniola (now Dominican Republic) in 1542. In 1795 France invaded the island and they were transferred to Havana (Cuba). Eventually, when Cuba became independent, the remains were moved to the Seville Cathedral.

However, some argue that he is still buried in the Dominican Republic, after a box with bone fragments and an inscription was found there in 1877. Although DNA investigations are only carried out in Seville (Dominican authorities have not allowed the exhumation ), it is still a mystery whether the tomb of Christopher Columbus really contains his remains ...

Fernando III of Castile he was king from 1199 to 1252, first of Castile, then of León and finally of Galicia (various regions of Spain). He was one of the first kings to unite the kingdoms of the Middle Ages. He was canonized in 1671 and became San Fernando (San Ferdinando) or Fernando el Santo (Ferdinand the Holy).

La Seville Cathedral it is surrounded by small columns connected by huge chains. These chains were placed in 1565 to prevent merchants from entering the temple with their horses when the weather was bad.

It also marked the boundaries of sacred places, where civil justice could not be carried out. People went there in search of protection and redemption.

La crown of the Virgin of the Kings (Virgen de los Reyes) has 11.960 precious stones and is made of 22-karat gold.

The Cathedral is also known for theattack in 1998 in which two people lost their lives. The attack was attributed to Basque terrorists.

Outside the Cathedral you will probably meet some gypsy who will try to put a sprig of rosemary in your hand: this is not a local custom, but a way to get some money!

add a comment of Visit to the Cathedral of Seville: Information and Curiosities