Jordan is a jewel in the heart of the Middle East, a country that holds the wonders of its millennial past, built by man or formed by capricious nature. Here the remains of the numerous civilizations that have crossed this land over the centuries are real open-air treasures. Discover the best places to see in Jordan.

Jordan is a predominantly desert country which nevertheless has a great diversity of landscapes. It is a destination famous above all for one of the new wonders of the world, Petra, this mythical Nabatean city inscribed in the UNESCO world heritage.

It is a land of history but also for centuries destination of religious pilgrimages. Many biblical sites are closely related to the Jordanian landscape such as Mount Nebo, considered a holy place because this is where Moses would have seen the Promised Land.

Jordan is a paradise for lovers of outdoor activities: you can go hiking in the Dana valley, canyoning in Wadi Mujib, float in the Dead Sea, discover the beauty of the Bedouin culture in the Wadi Rum desert ...

Discover the best destinations to see in Jordan ...

What to see in Jordan 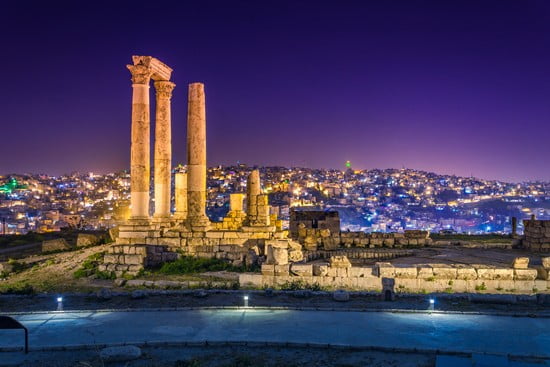 Temple of Hercules in Amman Jordan - Photo from Istock

Amman, known as the white city, is the capital of Jordan, located between the arid desert lands and the fertile Jordan Valley. It is an interesting mix of modernity and tradition. Markets with intense scents and old buildings contrast with western designer shops and restaurants.

Amman is seen by many tourists only as a point of passage when they arrive (or leave) at theQueen Alia International Airport. Yet in our opinion it must be visited because it is one of the oldest continuously inhabited cities on the planet. Because it allows you to understand and get to know an entire country and, of course, because it has a fantastic Citadel Roman located on one of the highest hills of the city.

From the hill of the Citadel you can enjoy a magnificent view of the entire city and several important archaeological remains such as the Umayyad Palace and Temple of Hercules. In the Citadel there is also the archaeological Museum of Jordan which has some of the famous Dead Sea Manuscripts.

In the lower part of the city you can stroll through its atmospheric streets, see the Roman Theatre from the XNUMXnd century AD and crowded Plaza Hashemita. Near the square is the King Abdullah I mosque, known for its impressive blue dome. 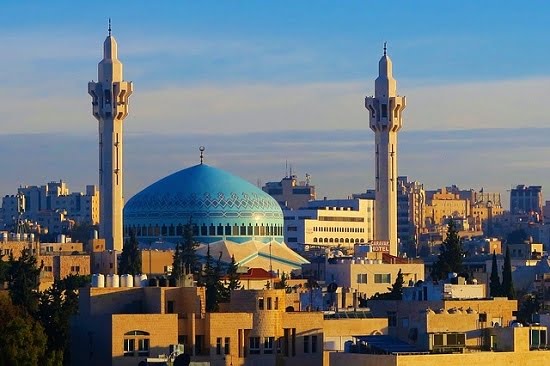 Amman in Jordan - Image from Pixabay

Also you can see the beautiful Abu Darwish mosque, decorated with black and white stones, the old souks of the city and the modern neighborhood “The Boulevard”.

Find a hotel in Amman

Jerash and Gerasa, this Pompeii of Asia, was one of the most important ancient Roman cities of the Near East, continuously inhabited for over 6500 years.


Located north of Amman, Jerash is one of the best preserved cities of the Roman Empire, which remained protected in the desert sand until 1920. It is one of the main destinations to see in Jordan, second only to Petra among the favorite tourist destinations.

It takes several hours to visit it, since the site is huge. What is particularly remarkable is the state of conservation of the various buildings. As you stroll, you can easily imagine the ancient city in Roman times.

Among the highlights of the visit, we can mention:

Jerash is less than an hour by taxi or bus from Amman. Another good option is to book one guided tour in English that includes the Ajlun Castle, a Muslim fortress with excellent views.

Find out how to visit Gerasa from Amman 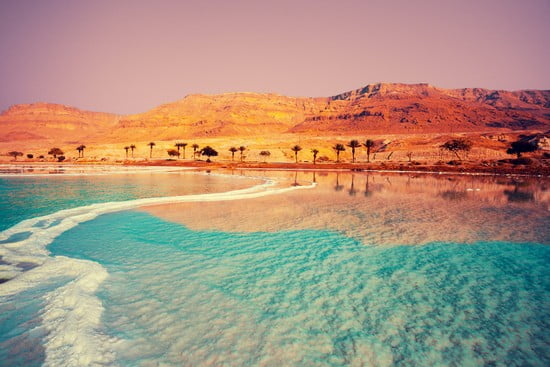 Floating on the sea is one of the amazing experiences you can have when visiting Jordan. The Dead Sea is not a sea but a internal lake, fed by the Jordan River and with a salinity index nine times higher than that of any ocean on the planet.


Its waters contain large amounts of magnesium, calcium and potassium, and theirs healing properties they attract numerous travelers who come here for various treatments. 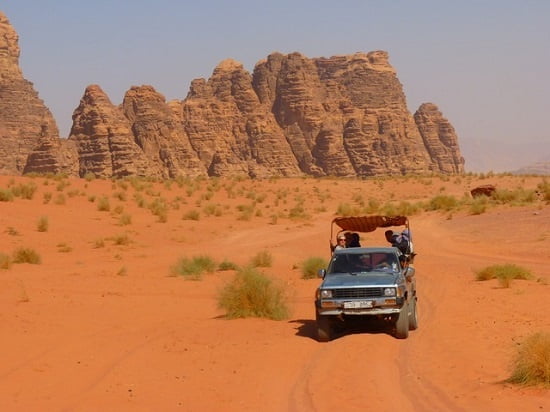 Wadi Rum resembles Mars and retains some supernatural landscapes. Halfway between Petra and Aqaba, the Arabian desert penetrates Jordan with a carpet of reddish earth and a universe of stone hills, the Jebels, who design a film set.

It is in this mountainous desert, located at 1600 meters, home of the Bedouin tribes, that most of the famous film “Lawrence of Arabia” was filmed.

Driving without a guide in the desert is strongly discouraged. The site is huge and it's easy to get lost! There are several tour to explore Wadi Rum and we invite you to take part in one of them (jeep tours, camel rides, nights in the desert, excursions…).

Spend the night in a tent watching the spectacular starry sky in the Wadi Rum desert is one of the best things to do in Jordan. The tea with the Bedouins or a lamb dinner that is cooked for hours in the desert sand will be one of the most unforgettable moments of the trip.

If you are not using a rental car, you can reach the Wadi Rum visitor center in taxi, in less than 1 hour from Aqaba or from Petra in an hour and a half.

Discover the locations to spend the night in the desert 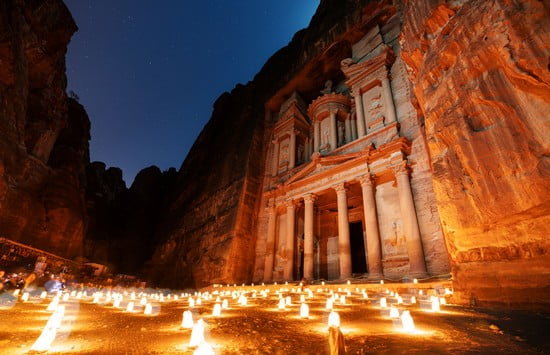 Petra in Jordan - Photo from Istock

The crown jewel, the main destination to see in Jordan, is Petra, one of the best archaeological complexes in the world.

Petra is not limited to a single facade carved in stone. Although this is the most famous image of Petra, the site is actually huge (several kilometers wide) and corresponds to an ancient city! It takes at least a full day to discover its many riches.

There are several routes through its orange mountains which are tinged with pink in every sunset. The narrow gorge (il Siq) reveals the temple Khasné al Faroun o Treasure of the Pharaoh.

Afterwards there is a series of tombs of kings, a citadel and an ascending path, with more than a thousand steps, which leads to El Deir (the Monastery), the most beautiful building that the Nabataeans were able to build. Other monuments are the Great Temple, il Qasr al-Bint (castle of the Pharaoh's daughter), the church, Temple of the winged lions, Museo in al-Habis and Museo Nabateo.

Discover all the tours to visit Petra

Just a dozen kilometers separate the Mount nebo from the old capital of the Kingdom of Moab. Madaba today is a must see for visitors and pilgrims who come to Jordan to admire some of the best Byzantine mosaics in the Middle East, especially one.

Jerusalem in detail, the lands of Palestine, the Egyptian peninsula of Sinai, the course of the Jordan River, the Dead Sea… This curious map has provided information to archaeologists and historians on lost cities and biblical settings. Only a tenth of the original mosaic has survived.

Located about 30 kilometers south of Amman, near the Dead Sea, you can easily reach it by bus, taxi or by booking a guided tour which also includes a visit to Mount Nebo.

To the east of Amman, scattered across the desert are many ancient castles, which are worth seeing in Jordan. Many of these ancient castles or mansions were used as a place where caravans trading spices and other products used to rest or spend the night.

To get to the castles, the best option is by taxi or rental car, another good option is to book this one excursion with an English-speaking guide.

There are several places mentioned in the Old and New Testament to see in Jordan, such as Mount Nebo and the Jordan River area. One of the places where most pilgrims gather is located at Bethany, on the banks of the Jordan, where John the Baptist is said to have baptized Jesus.

Il Mount nebo, the place where Moses glimpsed the Promised Land and died after a long journey from Egypt, is another place not to be missed. From the top of Mount Nebo you will enjoy a splendid view of the Dead Sea and up Israel.

On the way from Amman to Petra or Wadi Rum, if you have enough time, it's worth the detour a bit to visit Karak Castle.

At the time of the Crusades in the Middle East, this fortress was built at nearly 1000 meters above sea level, and served to monitor and protect trade caravans from Egypt and elsewhere. After a while it was used as a starting point for the military expeditions of the Crusaders, eventually, after several assaults, the fortress passed into the hands of the Muslims.

È one of the best preserved fortresses in the Middle East, its underground tunnels, dungeons, passages and incredible views will not make you regret spending your time here.

Most routes through Jordan end with a few relaxing days in Aqaba, the gateway to Red Sea and the only one port of Jordan. The city has a large tourist infrastructure with waterfront hotels and resorts, Western shops, fresh seafood restaurants and all kinds of sports and leisure activities.

Its biggest attraction is the seabed of the Red Sea full of coral, turtles and colorful fish making it one of the best places in the world to dive or snorkel.

There is a good bus connection between Aqaba and Amman, the duration of the journey is between 4 and 5 hours, the taxi for its high price is not recommended.

Find a hotel in Aqaba 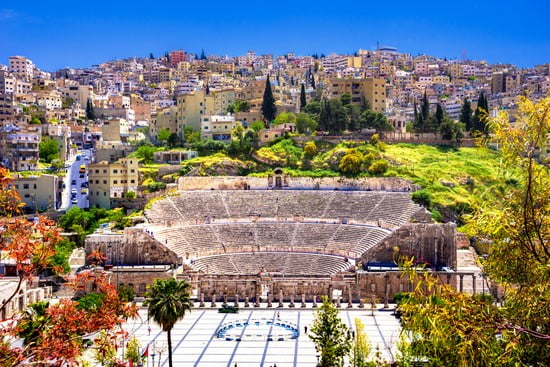 Roman Amphitheater in Amman Jordan - Photo from Istock
What to see in Kenya: 10 destinations and places not to be missed ❯

add a comment of What to see in Jordan, 10 surprising places to discover