When to go to the Middle East and visit its countries

When to go to the Middle East and visit its countries

The Middle East is a region of Western Asia, located between the eastern shores of the Mediterranean Sea and the Indian Ocean.

Many of the countries in this vast region for political reasons are considered part of Europe such as Turkey and Cyprus, part of Africa such as Egypt and part of Asia such as Iran and Afghanistan.

But on a tourist level they are undoubtedly part of the fascinating culture and beautiful landscapes of the Middle East.

A very diverse country that is literally the bridge between Europe and Asia. It encompasses the cosmopolitan metropolis of Istanbul, many historical sites and beautiful mountains, lakes and coastlines.


In addition, the coastal area offers some of the most renowned resorts in the Mediterranean. Istanbul is the only major city that spans two continents and a fascinating blend of East and West.

Home to some of the world's most important ancient civilizations, Egypt is famous for its outstanding archaeological sites, including the pyramids, one of which is the only remaining wonder of the ancient world.

Tourists visiting the country can enjoy the renowned shores of the Rosso or an evocative cruise on the Nile.

One of the fastest growing tourist destinations in the Middle East in recent years, thanks also to massive investments in the tourism sector.

The United Arab Emirates is one of the most chosen destinations by honeymooners and by all those attracted by the impressive and sometimes bizarre constructions of Dubai and Abu Dhabi.


Dubai is the most modern and progressive city in the United Arab Emirates. It boasts many skyscrapers, including the Burj Khalifa, the tallest building in the world.

This country, with its vast deserts, also includes fertile land along the eastern bank of the Jordan River. There are numerous destinations with important archaeological remains such as Jerash and Petra, one of the new seven wonders of the world.


Petra is one of the "New Seven Wonders", it was the impressive capital of the Nabataean kingdom around the 6th century BC The extremely salty Dead Sea is also a major tourist destination in Jordan.

Undoubtedly one of the most visited countries for religious tourism. Israel is the birthplace of Judaism and Christianity, plus there are numerous sites sacred to Muslims.

There are also sites of cultural, historical and prehistoric importance. A small land that contains a variety of stunning natural landscapes, including deserts, coastlines and snow-capped peaks in winter.

Lively nightlife, significant technological development and a liberal attitude make Israel a country that combines the old and the new.

Saudi Arabia is a rich state thanks to desert oil and is home to the holiest cities for Muslims: Mecca and Medina. Entry to Mecca is forbidden to non-Muslims, it is the holy city of Islam.

Like the United Arab Emirates, it is a country with a strong tourist growth in the last years thanks also to the numerous scenic beauties.

A country full of historical sites, with a variety of tourist attractions and ecosystems ranging from the central and southern deserts to the beautiful northern forests near the Caspian Sea.

Iran encompasses many ethnically diverse cultures and has been the heart of some of the world's most glorious empires. Tehran is a metropolis of 14 million people, a cosmopolitan city with great museums, parks, restaurants, heating and lots of nice people.

This Arabian peninsula is the richest country in the world in terms of GDP per capita. Also known for being the world headquarters of its government-owned Al Jazeera Media Corporation and for the amazing modern capital, Doha.

Bahrain is a small island state, the smallest of the Gulf emirates.

Iraq represents the cradle of civilization. Currently, the entire country is too dangerous for leisure travel, although more and more intrepid travelers may find Iraqi Kurdistan a pleasant place to visit.

Kuwait is an oil-rich emirate and therefore a destination for workers and businessmen, but generally not for tourists.

A small country different in culture, religion and politics. Beirut is a truly cosmopolitan city, the commercial and financial center of Lebanon. Unstable political situation.

Home to historic cities such as Bethlehem, Hebron and Jericho.

This country was part of the Fertile Crescent in ancient times and shows the imprint of all historical periods. Damascus is credited with being the oldest inhabited city in the world. The visit of the old city is very interesting. Unfortunately, it is currently the scene of civil wars.

This beautiful country, famous for its traditional fertile highlands and delicious food. Unfortunately, it is currently the scene of wars and bombings.

Before traveling to Middle Eastern countries, as for any trip, check on the Viaggiare Sicuri website. 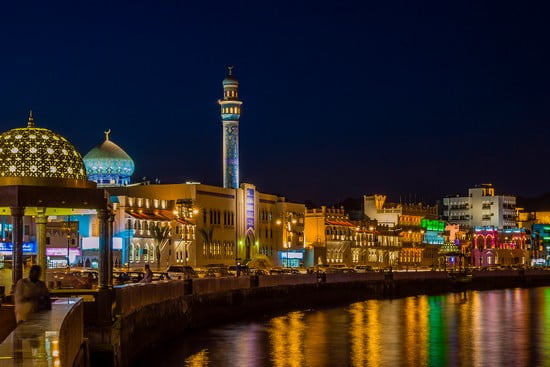 Muscat, Oman - Photo da Istock
Christmas markets in Europe: the most beautiful and which ones to visit in 2022 ❯

Where to stay in Dubai: areas and best cheap or luxury hotels to sleep in

When to go to Dubai, Best Month, Weather, Climate, Time

The Burj Khalifa in Dubai, ticket prices to visit the tallest skyscraper in the world

Burj Khalifa Tickets: Which to Choose and Why