Celebrating New Year's Eve in Madeira: what to do and where to stay

New Year's Eve in Madeira is one of the most beautiful and spectacular events of the island, and of all Portugal. One of the biggest New Year celebrations in the world is celebrated on this small Portuguese island in the Atlantic Ocean.

If you are planning to end the year outside of Spain, in a special place, Madeira is the perfect place. If you are undecided we anticipate that it is fireworks display of Madeira's New Year is listed in the Guinness Book of Records as the greatest show on the planet.

Furthermore, the climate Madeira is mild even in winter, being located much lower than Spain, having a latitude of 32 °. Therefore, it can also be a good opportunity to enjoy beautiful and mild sunny days. The average temperature in this period is 20 ° C and the minimum is 15 ° C.

A few days before 31th December thousands of tourists from all over Europe land on the island to spend a pleasant and festive holiday. Most of the Madeira New Year celebrations are concentrated in Funchal, the capital of the island

In addition to the classic appointment with the New Year celebrations in the square, There are many parties around the city, food stands on the streets and lots of it live music. The city amphitheater becomes a large nativity scene, while the streets of the city are illuminated by thousands of lights, offering an even more festive and characteristic environment.

Both in Funchal and in the other cities of Madeira, on the streets it is possible to find groups of windows, typical tradition in Portugal which consists in singing songs in the streets by groups of people announcing the birth of Jesus, wishing a happy new year.

If you want to enjoy something a little more sophisticated, there are several cruise ships which offer the opportunity to see the fireworks from the sea, enjoying the chicken soup, a typical traditional dish of the island, among the various courses during the cruise.

There are also traditions similar to ours, but with some variations. For example, in the fruit plate there are 12 raisins instead of grapes, one for each month of the year, and the underwear worn on New Year's Eve should be blue instead of red.

After the raisins, it's time to continue the party in clubs the most famous in Funchal, such as the Copa Cabana inside a casino, or the Café Teatro or the Gloria Latina for salsa lovers. New Year's Eve in Madeira is something fantastic, difficult to describe.

Since the climax of the festivities takes place in the city of Funchal, the best area to stay in this period is right in the capital. As always, it is advisable to book accommodation and also the flight in advance, to prevent the fares from rising.

Find and book your accommodation or hotel in Funchal

There are not flights direct from Spain to Madeira. From major airports with a stopover you can reach Madeira. Almost all flights make a stopover in Lisbon or Porto, while some at the airports of the Spanish peninsula.

Find and book a flight from Spain to Madeira

You can take advantage of the stopovers to visit either the 2 Portuguese cities, or those of the Spanish peninsula, which are also very interesting, especially in this period. 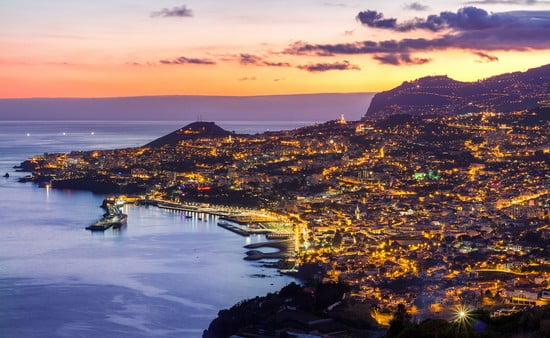 Funchal, Madeira, Portugal - Photo by Istock
Audio Video Celebrating New Year's Eve in Madeira: what to do and where to stay
Firenze ❯

add a comment of Celebrating New Year's Eve in Madeira: what to do and where to stay