San Marino: all the places of interest of the Ancient Land of Liberty

San Marino it is one of the smallest states in the world, so one full day is enough to see all places of interest. I visited it as a day trip from Rimini which is just a few kilometers away. 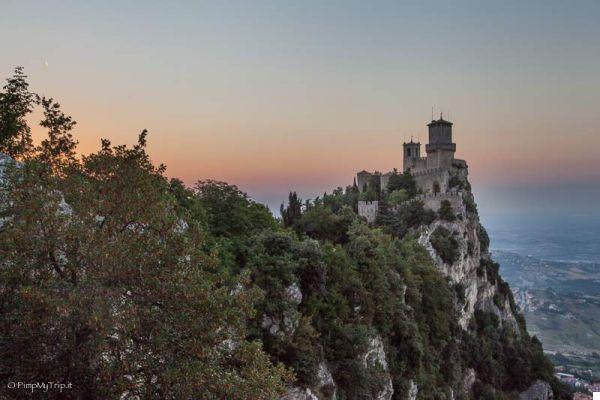 The Guaita Tower at sunset, not bad, right?

I have to confess that before visit San Marino I knew very little about the oldest republic in the world.

I often have the feeling, when I travel, that the time I have available is never enough to get to know everything a place has to offer, but since San Marino is about 61 square km large and that all the places of interest are easily visible in a few hours, I think it is the ideal destination to spend a day without running the risk of missing something.

So if you plan to take a nice relaxing holiday by the sea on the Romagna coast, make a note of San Marino in your diary, you just can't miss it! 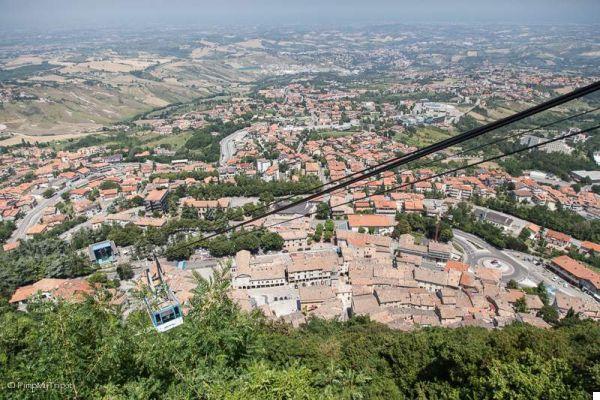 The panoramic cable car is the best way to get to San Marino!

A walk in San Marino

The first thing I noticed when I crossed the border (a bridge over the road says: "welcome to San Marino, ancient land of freedom") was the number of banks on the sides of the road and the number of cars other than mine. 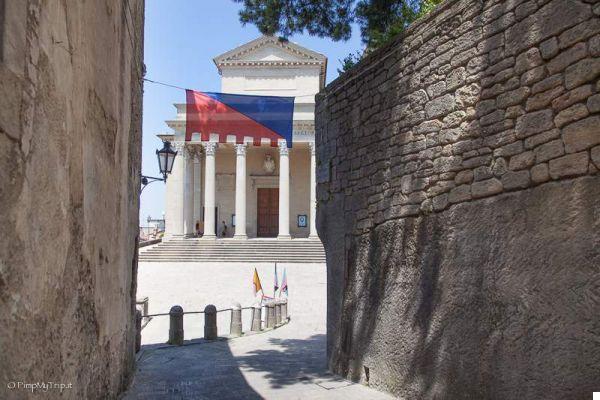 View of the Basilica of San Marino

The road continues to zigzag along the side of the Mount Titano (the fortress that houses the historic citadel of San Marino) offering views over the endless hills of Romagna, a patchwork of cultivated fields, vineyards and forests, up to the Adriatic.


You can get to San Marino either by car or by public transport. In both cases we must stop at United Nations square from where you continue on foot and cross the walls of the ancient citadel.

The best thing, however, is to park just before and take the panoramic cable car that leaves tourists a few meters from Piazza della Libertà where the Palazzo Pubblico, seat of the San Marino parliament. 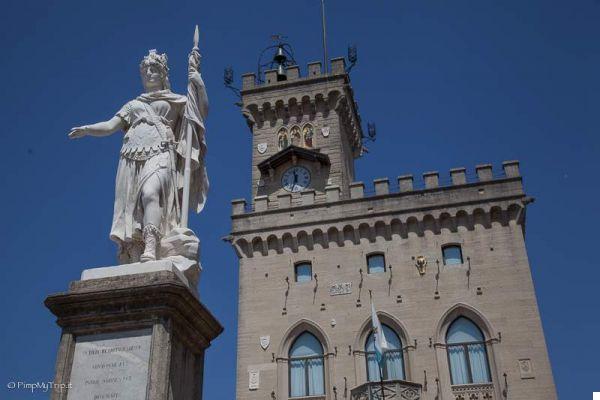 The Public Building and the Statue of Liberty (no, it's not New York's!)

The first square you meet a few meters after exiting the cable car is the Piazza della Libertà which houses the statue of the same name (donated by Countess Otilia Heyroth Wagener in 1876) and the Government Palace, Also known as Palazzo Pubblico. 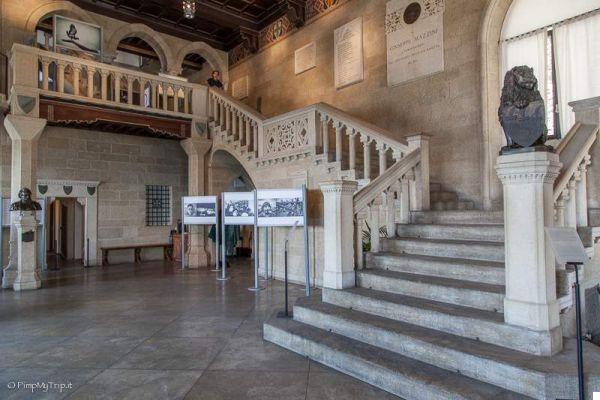 Interior of the Palazzo Pubblico

The palace can be visited and often, as when I was there, photography exhibitions are set up inside. Upstairs, which is accessed via a large staircase, is the headquarters of the Great and General Council, the parliamentary body of San Marino.

Sixty council seats are lined up along the perimeter of the room, while in the center is the Dual Throne of the Regency. The room is dominated by the presence of the large mural by Emilio Retrosi, which occupies the entire back wall. 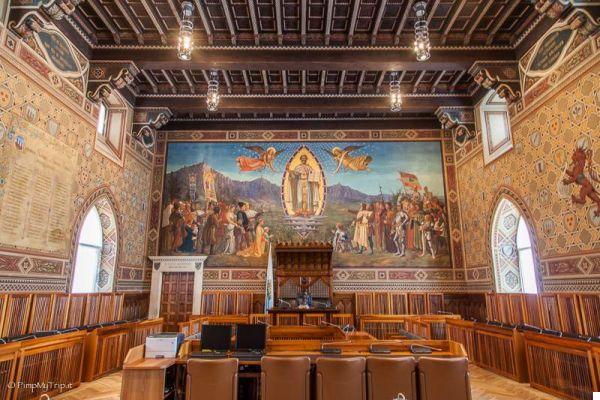 The Hall of the Great and General Council


Official ceremonies are also held in the palace and every hour you can watch the changing of the guard.

Even the cisterns of the palace can be visited but you have to pay a separate ticket, as a good Genoese I got caught up in the delirium of poverty, as I call it, that is, that feeling of having already spent more than what I can afford and I jumped.

The 3 Towers and the Path of the Witches 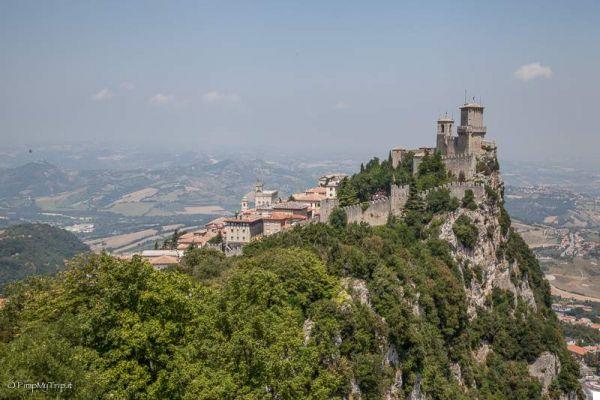 Its towers are the places of interest certainly not to be missed in San Marino: three towers linked together by the spectacular Path of the Witches which offers breathtaking views of each of them.

Only the first two can be visited at a cost of 4,50 euros (as of 2016), but if you don't want to miss anything in the city, it is better to take the combined ticket which, at a price of just over 10 euros, also includes the Palace. Pubblico, the Pinacoteca di San Francesco and other places of interest.

The first tower, Guaita, dating back to the XNUMXth century dominates the precipice of Mount Titano and is the oldest of the three. 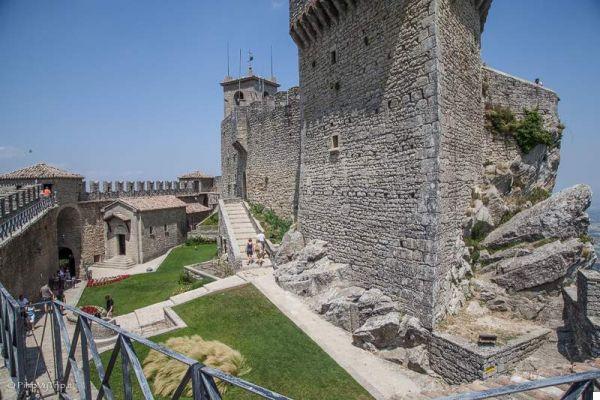 Guaita, inside the walls

From the top of the tower the view sweeps 360 degrees over the whole region and it is not difficult to think that it was a perfect observation point to check for any attacks by enemies. To get to the top there are three flights of wooden stairs, but beware, the first one with rungs is not for everyone, it is better to go up with suitable shoes.

The second tower, Cesta, on the other hand, is of more recent construction and stands on the highest point of the mountain.

Inside it houses the San Marino Museum of Ancient Weapons and from its tower you have a breathtaking view of Guaita. 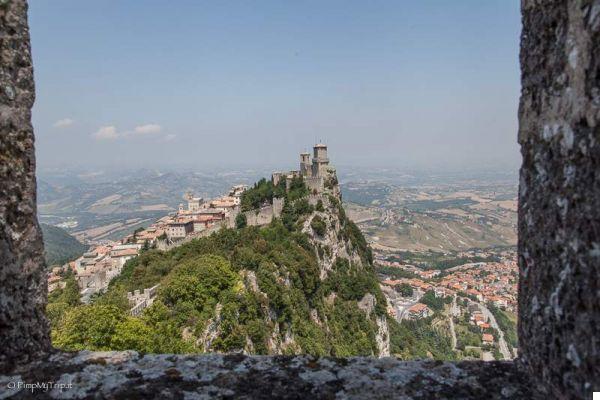 Panorama on Guaita from the second Tower, Cesta

The third tower: the Montale

The third tower, Montale, is the smallest of the three and the farthest from the town center. Inside there is a prison, called the bottom of the tower. Unfortunately the Montale cannot be visited. 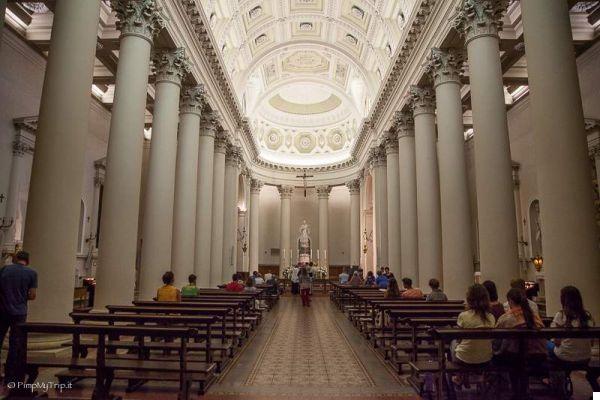 Interior of the Basilica of San Marino

This Neoclassical style Basilica has always been at the center of the social and cult life of the San Marino people.

Under the main altar, the Sacred Bones of the Founder of the Republic are kept in a small urn.

I am not a great lover of art and I would also say that I understand little, but I liked the statues depicting the Twelve Apostles and the Redeemer by the sculptor Adamo Tadolini, the four Cardinal Virtues, the chair of the Regency and the painting called "Noli me tangere ”by Elisabetta Sirani, depicting the Risen Christ. 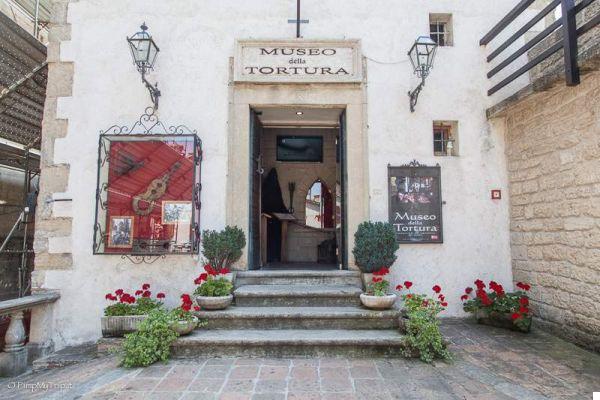 The entrance to the Torture Museum

If you like chilling things, it seems that the torture museum is one of the places of interest in San Marino that you just can't miss. I say "apparently" because I have a weak stomach and I have decided to ban museums of this type from my life since every time I see the torture tools I have the feeling that they are using them on me.

Three floors crammed with every possible contraption to cause physical and psychological pain to a human being that only the sick mind of another human being is able to devise.

It hurts me just to think of certain types of torture inflicted such as the torture of the drop, the Spanish Spiders and other similar devilry.

Other places of interest in San Marino 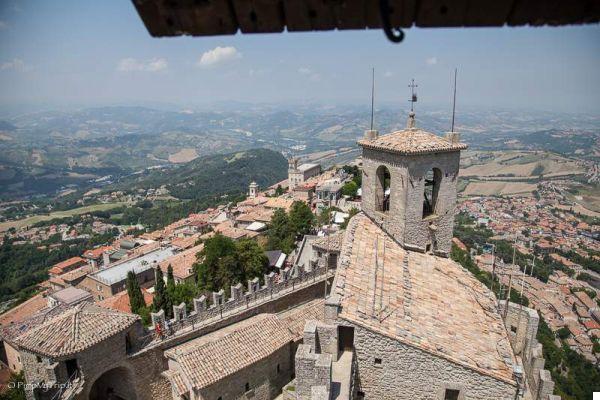 Panorama from the Guaita Tower

Directly behind the Palazzo Pubblico is the Cava dei Balestrieri, where traditional San Marino events take place involving the crossbowmen and flag-wavers of San Marino.

The large gray stone door represents the first access to the citadel of San Marino and was built during the construction of the third city wall in the XNUMXth century.

Inside, a commemorative plaque recently affixed celebrates the entry of San Marino among the sites UNESCO World Heritage Site. 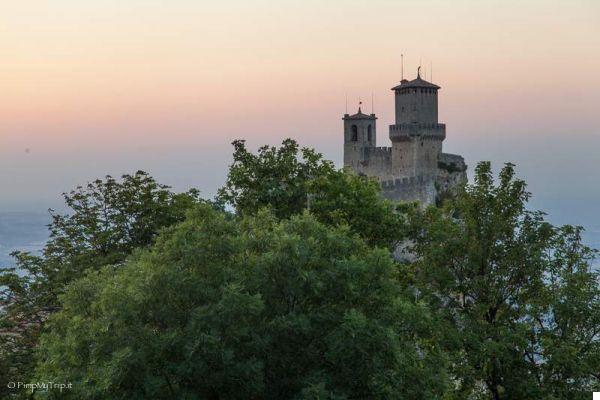 Another view of Guaita, this time at sunset

Housed in Palazzo Pergami Belluzzi, it collects about 5000 pieces relating to San Marino and its history in its rooms.

The collection is rich and varied due to the different types of objects, from archaeological finds from the Neolithic to coins, paintings to objects from ancient Egypt, Etruscans and Romans.

The collection also houses sculptures by Guercino and the famous votive bronzes of the "Tanaccia" (dating back to the Middle Ages) as well as the gold stud of the "Tesoro di Domagnano". 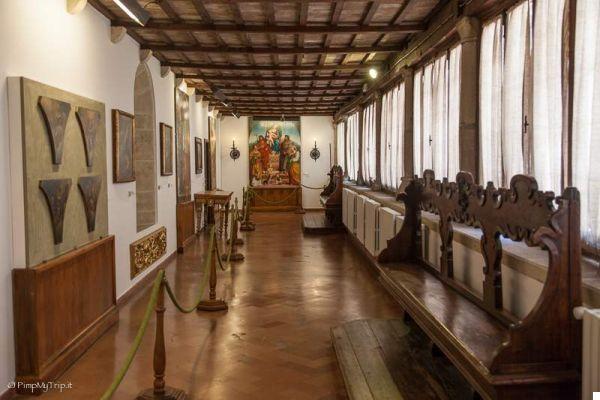 Adjacent to the church of the same name, this small museum houses paintings and ancient relics, bronze statuettes but also pseudo-modern paintings and objects. I went there because the entrance was included in the combined ticket, but honestly I don't know if I would recommend it.

This "list" of what to see in San Marino is quite exhaustive and will keep you busy for most of the day, a tip is to stop for dinner, contrary to what you might think it is cheaper to eat here than in some tourist places in Rimini (piadina from San Marino vs piadina from Rimini, 4,50 euros against 5,50).

As I said, i places of interest in San Marino they will keep you busy for most of the day, but it is by peering into the windows of souvenir shops and fashionable boutiques and above all getting lost in the stone alleys of the citadel that you will experience the true magic of this pretty little gem.

Visit San Marino: how to get there, what to see and where to sleep

add a comment of San Marino: all the places of interest of the Ancient Land of Liberty