Small guide to Kosice, Slovakia off the beaten path

In Slovakia many times, first for work and then, due to the great harmony with this city, for vacation. I warmly thank him for writing this post for ForToursLovers. 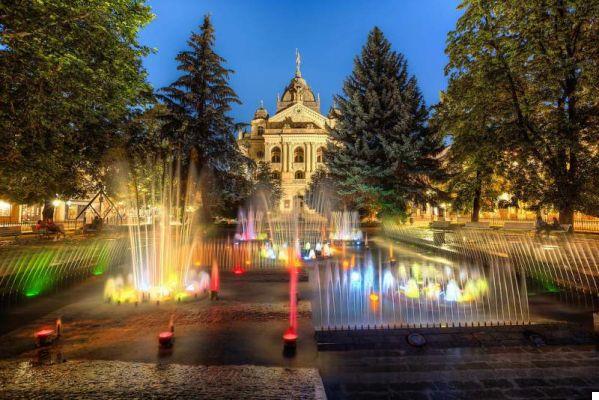 I visited Kosice, second city (in size) of the Slovakia, in all seasons: in late autumn, several times in winter and spring and once in summer. I went there first for work but then I went back often only on vacation.

Due premise, since I am a man and single: yes, there are many beautiful women in Slovakia but this is not the only good reason to travel here. That is, if the place hadn't been nice, wouldn't I have come back just for that reason?

Slovakia, which many confuse with Slovenia.
It is located west of Austria, north of Hungary, east of Ukraine and south of Poland. It has a mostly flat aspect, it does not suffer particularly intense rains (very few floods) and in summer the climate is warm but with the cool of the evening. Really little heat. Winter is very cold and very often the landscape is covered with the white mantle of snow. 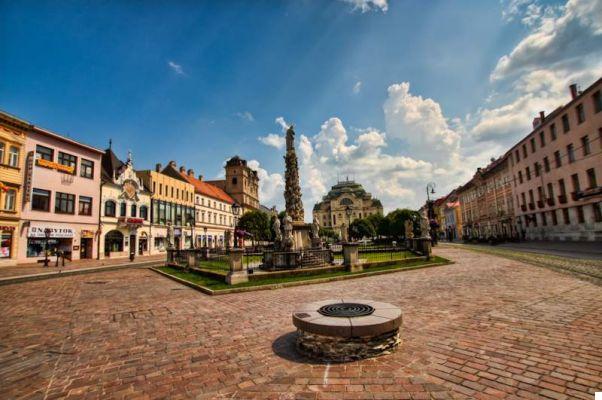 The main street of Kosice

Kosice has an international airport and a railway station. The station connects it with Bratislava (capital of Slovakia) and with other international cities, the airport mainly with Prague e Vienna (with Austrian) and with London (with WizzAir). With the Austrian the overall journey (departure from Milan Malpensa) is about 2 and a half hours with a stopover in Vienna (with waiting times at Vienna airport about 3 and a half hours).
The Austrian, even if the flights are very comfortable, is not particularly cheap: the air alternatives to save are to land at Budapest o Krakow with a low cost company and then reach Kosice by bus.

Once you have landed in Kosice, to reach the center you have two options, taxi or bus: by taxi (with about 9 euros) you arrive in the center in 10 minutes.

Attention, if you take a taxi, go to those who leave the airport (they have lower rates), do not be “fooled” by the other taxi drivers who wait on foot at the exit of the landings, they have higher rates.

There are many hotels in Kosice: from Double Tree Hilton (possibly the best but also the most expensive in the city) ultra-savings pension. Generally in hotels the cost is about 20/30 euros per night with a buffet breakfast (which is usually worth as a real meal given the amount of stuff to choose between sweet and savory).
Keep in mind that Kosice is a university city, so if you want it is also much cheaper.

What to see in Kosice

The center of Kosice (Stare Mesto or Old Town) is characterized by a very long pedestrian street (main Street or Via Maestra) in the center of which stands the Elizabeth Cathedral.
This cathedral, a XNUMXth century gothic church, is very beautiful and very well maintained. Before and after it there are a garden with a fountain and a delightful one Chapel of St. Michael, another Gothic building, this one with a single nave: the Gothic facade with the image of the Archangel Michael crushing the devil is very beautiful. 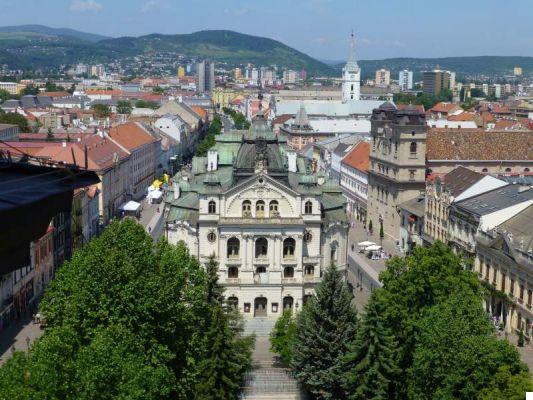 Going beyond these two wonders you come to a garden with the “Singing Fountain” or a fountain whose jets of water alternate with the rhythm of the music (note: during the winter there is no water but the music remains!). Immediately after is the State Theater followed by another garden with fountains ending in a Trinity monument.

On the sides of the street you can admire many historic buildings: the Old Town Hall, Andrassy palace, now home to a pastry shop and café, the palace Csáky-Dessewffy, seat of the Constitutional Court of the Slovak Republic, the Jacab palace, built in the nineteenth century in a pseudo-Gothic style with some stones taken from the cathedral of St. Elizabeth, la House of the Beggar and that of Captain. Among these sumptuous palaces there is no shortage of churches of other religions such as the great Orthodox church and, not far away, the Synagogue and dozens and dozens of restaurants, pubs and shops to be discovered.

At the end of the road there is the Slovak History Museum.

In summer (but also in autumn and spring with plaids to use) the restaurants and pubs have all the tables outside while during the Christmas holidays the street is filled with small houses where you can buy handmade Christmas gadgets (especially of glass and wood) and mulled wine, desserts and sandwiches.

La Steel arena is the ice rink of the city where the hockey team plays or where concerts are held.


Continuing out of the city (about half an hour by bus, about twenty minutes by car) there is the Kosice Zoological Garden (the largest in Slovakia).

The nearby is also worth a visit Herl'any geyser (precisely in Herl'any which is a small town in the Kosice district). 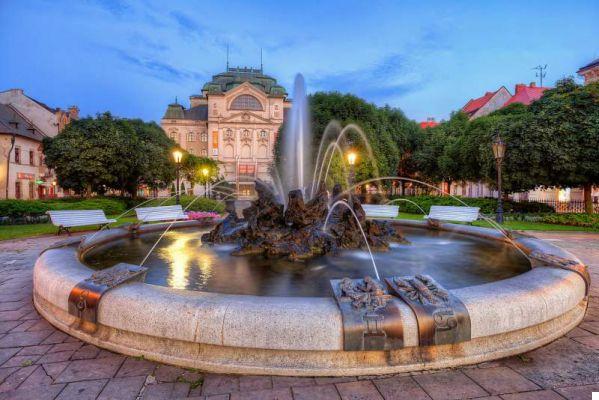 Kosice is a university city where many students come to study from all over Europe thanks to the Erasmus project. The center is constantly crowded with young people, especially Russians and Germans, mostly students but also tourists who have come to visit the city.

In the pubs and shops of the central street it is not difficult to find people who speak English (especially in pubs). Slovak is a very difficult language with very little to do with Latin. But even if you are faced with someone who does not speak English, they are usually all available and try to understand you and help you.

In Kosice you can eat really well. The cost of a tasty and abundant lunch is around 10/15 euros (and includes entry dish + main dish + dessert + drinks!). Beer costs practically nothing (and it is always excellent), alcohol instead has more or less the cost of here in Spain. If you pass by Kosice you must necessarily eat at With Malina, a restaurant that has recently been elected by TripAdvisor as the "best restaurant in Kosice" (almost always open from 11 to 23): the menu varies from Polish to typical Slovak cuisine, the staff speaks perfect English and is very kind and the courses are mouth-watering.

Important: leave a tip because the service is never included with the price of the meal.

Remember that we are in central Europe so the kitchens close early (often at 21pm they are closed) and the restaurants close at most by 22pm, with the exception of Med Malina which is always open until 23pm. 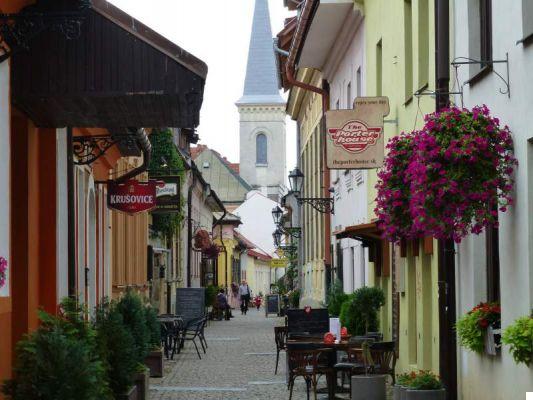 A street full of small restaurants

If you want to go shopping, apart from the shops in the center which are more for tourists, there are a couple of well-stocked shopping centers, one right in the center and the other (larger) not far away (on foot 40 minutes and the walk allows you to to see the very pretty suburbs and not "to be avoided" as often happens in large European cities).

There is cinema (even 5D) even if language is an obstacle.

For the after-dinner, the choice is only between which disco to choose and there are many. From the small ones in the center (like the Jazz) to the big ones just outside (like theIbiza). For a quieter evening there are plenty of pubs to sit and drink and Bowling. 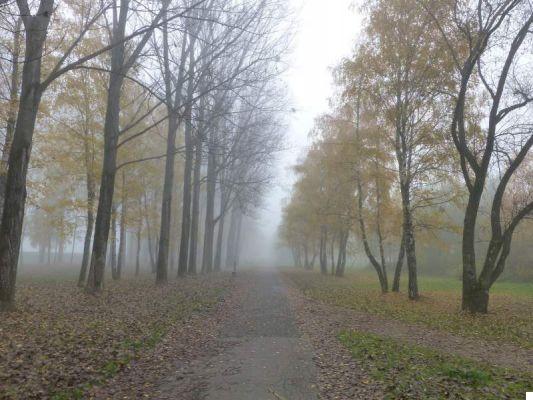 Kosice I liked it a lot. It is a small city for royalties and perhaps for this reason it has a particular charm. It welcomes you with warmth and stays inside you. A city to explore on foot, where you can relax during the day and have fun in the evening. Highly recommended.

Podgórze, What to See in the Krakow Ghetto ❯

When to go to Slovakia, Best Month, Weather, Climate, Time

add a comment of Small guide to Kosice, Slovakia off the beaten path