When to go to Papua Nuova Guinea, Best Time to go

Papua New Guinea is part of theOceania and occupies the eastern region of the island of New Guinea, the rest of which belongs to theIndonesia; it is located above theAustralia and overlooks the Pacific Ocean. Its territory is mainly mountainous with tropical rainforest occupying much of it. It is not one of the most popular trips due to the country's high level of danger, but some tourists choose it as their travel destination for its nature and spirit of adventure.
"Papua New Guinea is a million different trips together", as defined by the tourism site, because here you can go through the tropical jungle, sail the mighty Sepik River, surf the waves of New Ireland, dive into the cliff and swim among the corals. reef, kayak in the fjords around Tufi or climb the mountains in the Highlands region.
Papua New Guinea's traditions are still very vivid and, among the oldest on the planet, are mainly linked to the Polynesian and Micronesian culture of the Pacific islands. You will find the ancestral customs everywhere, between remote villages or modern urban centers, in ceremonies, festivals, weddings, initiation rites, through dance, music, the bright colors of costumes. 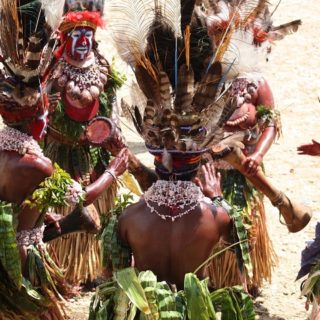 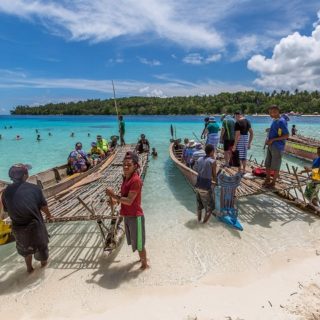 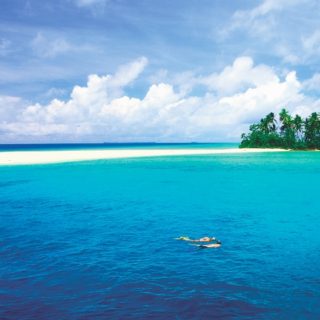 The reef of Papua New Guinea is one of the best and most spectacular in the world. Rich in marine species and with a coral reef still in excellent condition, every year it attracts millions of tourists passionate about diving or attracted by the marine nature to be discovered with a simple snorkel. Here is a sample of the seabed of the Coral Sea.


Nor can you miss the mumu, the local gastronomic dish par excellence, made with pork and roasted vegetables that are still cooked today with the traditional method, inside a hole dug in the ground and filled with embers and lighted stones, all buried for many hours under stones to boil and a bed of leaves, for a slow and flavored cooking. 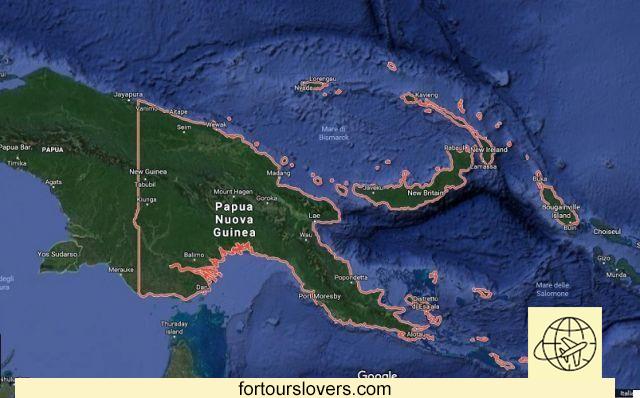 Papua New Guinea's tropical and monsoon climate makes this corner of the world particularly rainy in all seasons of the year. Humid heat is almost always present, especially in the period of heaviest rains between December and March. In the capital, Port Moresby, it rains for about 10 days with 18 cm of rain per month between January and March, while temperatures remain constant throughout the year between 23 ° C minimum and 31 ° C maximum

. During the driest season, between July and October, rainfall is reduced to about 3 days and 3 cm per month.

Rainfall increases in intensity as you move north and east, with rainfall values twice those of the south of the country and this abundance continues throughout the year with rainfall ranging between 20 and 30 cm on average per month. Temperatures, on the other hand, do not vary with respect to the rest of the country, are high in all regions and hover around 30 ° C during the day during the twelve months of the year.

In the mountainous areas the heat gives way to lower and cooler temperatures, rainfall is concentrated in the period from October to May, with more limited values in the months of June, July and August.

, when rainfall is lower than the rest of the year, especially in the eastern islands ideal for diving and snorkeling.

: Farnesina's website discourages travel that is not strictly necessary! Read here the risks involved, but also take a look at the tourist promotion site and take note of the information on safety in the country, you will find the most suitable advice for those who do not want to give up the trip, using a local. guide.

: The journey is long and when you have finally arrived in these distant lands you can't miss the cultural events of the moment to experience Papua New Guinea completely. On this page you will find the events of the current year.
When to go to Paraguay, Best Month, Weather, Climate, Time ❯

add a comment of When to go to Papua New Guinea, Best Month, Weather, Climate, Time