Caye Caulker, Guide to the Island of Slowness in Belize

Caye Caulker is a small island off the coast of Belize. I spent a few days here, preferring it to the more famous and quoted Caye Ambergris (San Pedro, the famous Isla Bonita sung by Madonna) and if I went back I would make the same choice. 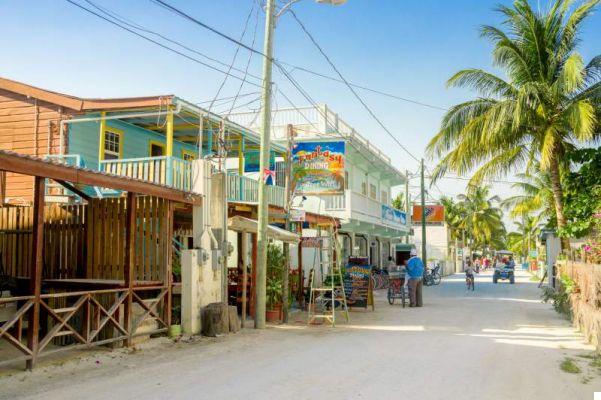 Caye Caulker, the island of slowness in Belize credit Hidalgo

Caye Caulker is relaxed (the island's motto is “go slow”), full of young people, certainly cheaper than the neighboring islands but just as beautiful: it is no coincidence that it is the favorite destination for backpackers.

So if you are looking for a place to relax a few days on the wonderful Carribean Sea come here, but hurry: the crystal clear waters and the beauty of the island have already been discovered by mass tourism and I believe it won't be long before the island becomes a tourist trap.

Don't expect to find endless beaches on Caye Caulker. What most resembles us is a small strip of white sand from which the piers that stretch out into the sea depart.

Don't come here if you are looking for resort life, because there are none at Caye Caulker resorts: the ultimate in luxury is a few houses with a swimming pool. And they are few.

Even if what you are interested in is the nightlife and dancing in the disco until dawn Caye Caulker is not for you. Of course, don't get me wrong, it's not that there's no movement, but it's more like a few places where young people gather to listen to reggae music, drink coconut rum and chat quietly. 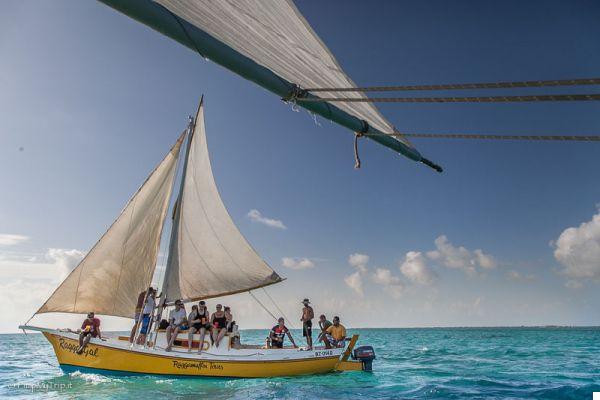 One of the activities to do in Caye Caulker: diving on the Bilize reef which is less than 2 km away

So what do you do in Caye Caulker? You walk on the streets in the middle of the colorful houses, you sit on the pier to listen to the waves, you sunbathe, you lie down in a hammock to read a book. And of course you can fully enjoy the beauty of its sea: snorkelers and scuba divers will love this place. The reef here is one of the most beautiful I've ever seen in my life.

How to get there and essential information

You can get to Caye Caulker from Belize City from where many fast ferries (water taxis) depart every day, or from San Pedro.

Every day there is a ferry that connects the island with Chetumal in Yucatan Peninsula in Mexico.

From Belize City you can also reach Caye Caulker with flights operated by Tropic Air.

The local currency is the Belize dollar (BZD) which is worth about 0,5 US dollars.

If you go in high season, booking early to sleep is a winning choice. 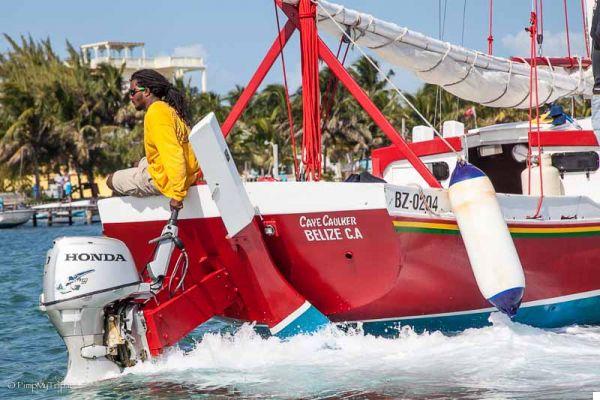 The best thing to do in Caye Caulker, enjoy the sea!

There are hostels and guest-houses delicious and at decent prices. We arrived without having booked but we still found a room at China Town Hotel where for a double with bathroom we spent about 50 euros. In spite of the fact that this is a large, somewhat nondescript hotel, the rooms are clean, the price is good and the wi-fi works well.


Still find a good choice of others hotel here on booking.com.

Caye Caulker is, in extension, the second largest caye in Belize (about 4 miles) but the inhabited part is only a mile long. The island is in fact divided in two by a canal, lo Split, created by typhoon Hattie in 1961. The southern part of the canal is the downtown area. The northern part, on the other hand, is sparsely inhabited, mostly private houses and a tangle of mangroves.

The city part of Caye Caulker is where the houses, hotels, restaurants and clubs are located. Right in front of the Split is Caye Caulker's most famous (and coolest) club: the Lazy Lizard.

This part of the island is quite small and can be easily covered in about 20 minutes. My advice however is to move faster than rent a bike though the cost is not very low, around 8 euros per day.

The bike will allow you more than anything else to return calmly in 3 or 4 minutes to the hotel at the end of the evening.

The Lazy Lizard is a bar-restaurant located on the pier where you can also eat something if you want, but its strong point is having a beer and waiting for the sunset. If you go there on the first night you can't help but go back every day!

If you are looking for some nightlife after enjoying a beautiful sunset at the Lazy Lizard, grab your bike and hit the I&I Reggae Bar the center of the island's nightlife.


La beer (excellent Belikin, a local beer) costs around 6 BZD, while for one piña colada expect to spend as much as 15 BZD (but they really do it in a fantastic way, the best of my life).

As regards the restaurants, here there are really something for all tastes: some more luxurious offer majestic fish dishes, but there are also cheap places where Mexican dishes are served, the typical Creole dish with spicy chicken and Chinese cuisine.

Being the island of slowness, the rhythms for eating are also very relaxed, also be prepared to wait an hour before eating the dish you ordered.

The cuisine is excellent: count that a main lunch is between 15-25 BZD, breakfast instead in the cafes costs about 6 BZD.

Make sure you dine at least once at Wish Willy’s the most famous (and in my opinion the best) restaurant on the island.

Is Caye Caulker Safe? There have been unpleasant incidents on the island for girls who travel alone and have received unwelcome advances. This is absolutely not a reason not to go there, but it is better to avoid wandering alone at night in the less frequented parts, joking if someone asks you if "you want to have fun" and to abuse alcohol.

What to do in Caye Caulker

There are many activities you can do in Caye Caulker. The whole main road that runs through the city part of the island from north to south is dotted with agencies that offer the most varied excursions and activities, from diving, to kayaking, to windsurfing.

I believe the Blue Hole needs no introduction being one of the most famous diving spots in the world. It is a vertical cave (a marine sinkhole to be exact) formed as a cave during the ice age and which sinks into the depths of the sea for 123 meters.

I was not advised to go there because the really interesting part, that is the stalactites that characterize it, are more than 30 meters deep and my Open Water certification does not allow me to go down more than 18 meters. The cost for the dive is high, around 250 euros per person, but if you are passionate about diving it is absolutely unmissable.

The Blue Hole is among the UNESCO heritage sites.

Excursion to see the manati 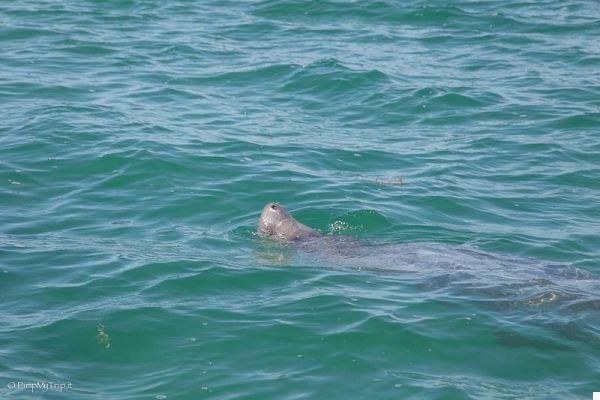 A docile slap comes out of the water to breathe: these large animals are at high risk of extinction

The manati, or sea cows as our captain of the boat called them, are large and docile animals and highly endangered. Many agencies organize day tours for Swallow Caye, a perfect place for sightings. It will be one of those experiences you will never forget and even if it is a little expensive it is absolutely worth it. 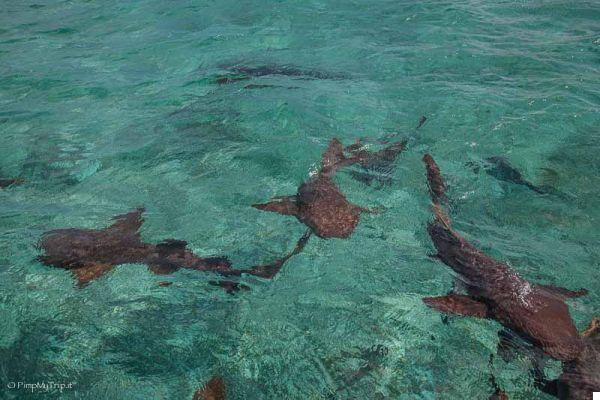 For snorkelling we chose the one day tour of the Raggamuffin agency. The tour includes three snorkelling spots: i Coral Gardens, the Shark Ray Alley e Get chan (one of the most famous snorkelling spots in all of Belize). Lunch is included in the tour (cost about 70 euros per person) and on the way back the guys will make you (spoiler alert!) An aperitif with shrimp cevice and coconut rum.

Venture to the northernmost part of the island

Split itself is already very interesting for snorkelling, sunbathing and swimming, but if you want a little adrenaline you have to go up to the northernmost part of Caye Caulker: this area is in fact made up mostly from a tangle of mangroves it is not very popular with tourists and is full of crocodiles!

In addition to this, if you have the courage to snorkel, you can observe anemones, gorgonians, various species of fish and much more.

Cenote Discovery, dive into the Mayan caves without a diving license ❯

When to go to Belize, Best Month, Weather, Climate, Time

add a comment of Caye Caulker, Guide to the Island of Slowness in Belize