La Kings Road it is one of the three paths that unite Amman a Petra and certainly among the three streets it is the only one not to be missed in a trip to Jordan.

Unfortunately there is no public transport that runs along it, so it is necessary or rent a car or take a taxi with driver to accompany you.

We opted for the second option for convenience: the Road of the Kings is a long meandering ribbon and traveling it all takes several hours, moreover in the chaos of the Jordanian cities (Amman in primis) it is easy to get lost and if you want to optimize the time available it is better having someone who knows how to get around so that you can devote precious hours to visiting the various points of interest rather than losing them to extricate yourself from the traffic.

Clearly the price if you rent a car is much lower. 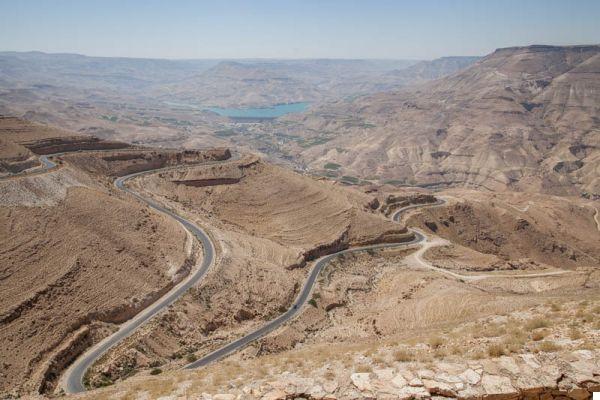 La Kings Road it has been used as a trade route for about 5000 years. Originally the road began in the ancient city of Heliopolis in Egypt (today the outskirts of Cairo), crossed all of Jordan and ended in Syria. Over the years the road was used first by the Nabataeans for the transport and trade of spices, then it was fortified by the Romans during the Crusades, but it was also used as a pilgrimage road by the Christians and as a way to Mecca by the Muslims.

The Road of the Kings meanders between cultivated hills and arid deserts, flows over dams, crosses wide canyons and crosses small rural villages, giving a very clear idea of ​​what the varied territory of Jordan is as well as showing a cross-section of rural life that does not exist. manages to grasp if you only visit the tourist resorts. 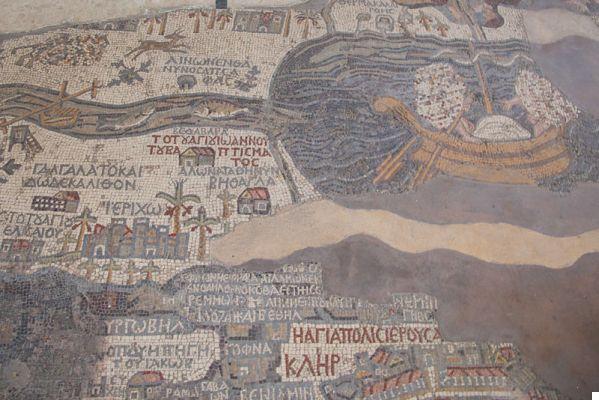 A detail of the Madaba mosaic

If you decide to proceed from north to south and then from Amman to Petra, as soon as you leave the chaotic traffic of the capital of Jordan, the first stop where it is advisable to stop is the town of Madaba.

Madaba with its market full of people and children running around in the middle of the street would be nothing special if it were not for the fact that it houses some of the best preserved Byzantine mosaics in the world: among these stands out the famous mosaic "Map of the Holy Land" in the small church orthodox church of St. George which represents the itinerary to reach Jerusalem through the whole world known at the time.

The mosaic, which is not whole, was estimated to consist of about two million small stones. Even today it seems that, hidden under the buildings of the town of Madaba, there are hundreds of other mosaics still to be discovered. 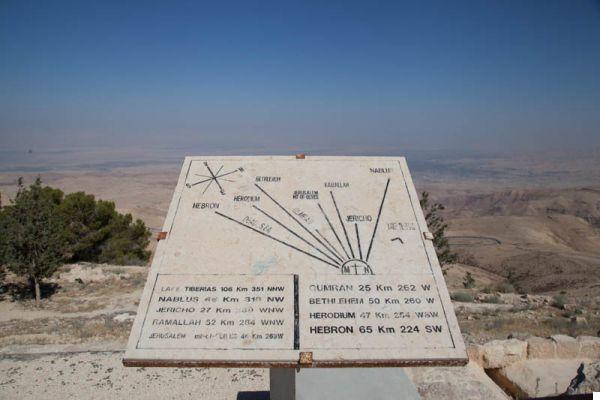 The view from Mount Nebo

Although I am not very religious, I must admit that the Mount nebo it is another place to stop because despite everything being in the same spot where Moses saw the Promised Land somehow moved me, after all I have always heard of it and somehow it is part of our history.

From the car park you go up on foot along an easy climb at the top of which there is a church (now closed for some years, it seems 6 or 7) a tent under which beautiful mosaics are sheltered, a small but interesting museum and the terrace from which you can enjoy a beautiful view of the surrounding area and that should be exactly the point described by the Bible. A "map" helps to understand the direction in which some major places of interest are located, such as Jericho and Jerusalem.

From Monte Nebo, the road continues with gentle curves until it reaches the gorges of the Wadi Mujib. I had already heard of what is called the Grand Canyon of Jordan, but the view from the top of the deep rift in the desert rocks is breathtaking.

All around the landscape is completely desert, with rocky mountains swept by the wind and burned by the sun, it would seem that no one can live there if it were not that every now and then you meet some camp formed by a few tents and some thin goats, lost on this harsh land, right in the middle of the absolute nothing. Deep up to 1.300 meters, since 1987 it has housed a Biosphere Reserve covering an area of ​​about 212 square km.

Panorama of Wadi Mujib from the Kings' Road

The bird's-eye view of Wadi Mujib along the Kings' Road is one of the most famous photographs one can take home from a trip to Jordan.

After crossing the large artificial dam, the road continues through desert sceneries of pristine beauty. The temperatures are really very high creating on the asphalt that quite frequent phenomenon whereby it seems that the cars are mirrored in a small lake, called the inferior mirage.

We go down every now and then to take some pictures, but we get back in the car at a run, until we arrive at another panoramic point, this time on the small town of Dana, very famous for its nature reserve, a UNESCO biosphere.


The village of Dana

The picturesque village of Dana, perched on top of a deep precipice from which you can enjoy a beautiful view and built entirely of light stone, is the ideal starting point for visiting the reserve, a series of deep gorges where areas covered with a luxuriant vegetation alternates with landscapes of limestone and sandy rocks.

Clearly, going through it without stopping at least a couple of days to explore the area is really a shame, but time is running out and we have to arrive in Petra in the evening so we reluctantly settle for some nice photos, adding Dana to the list of reasons why we will have to return to Jordan sooner or later.

The small village of Dana

But even if along the Strada dei Re the almost dramatic landscapes are the masters, even man has worked hard to make his own contribution to the magnificence of the area and has done so with the construction of two majestic fortified castles, that from Karak and Shobak.

The first in an enviable panoramic position has been completely renovated and is a slightly smaller version of the famous Krak de Chevaliers in Syria. Having already seen the Krak we decided to skip Karak and to visit only Shobak, more pleasant and somehow more fascinating.

In short, it inspired me more charm so abandoned, semi-destroyed and overgrown with weeds. The castle, like Karak, also boasts a long history dating back mainly to the Crusades. 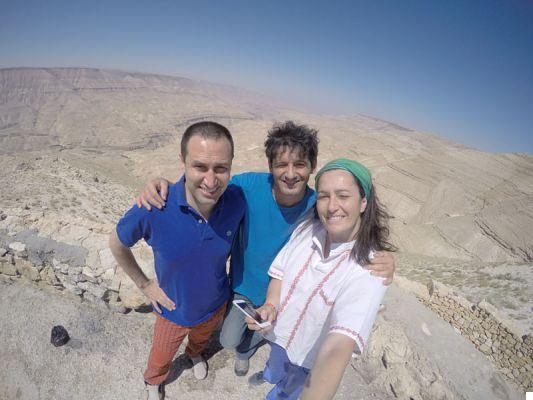 Road of the Kings, Wadi Mujib

Although in the past the Road of the Kings was Jordan's main communication route, today most of the traffic moving between Amman and Petra runs along the highway of deserts, certainly much faster, but much less scenic.

Although it will cost you a little more in economic terms, as there is no public transport, go there Kings Road it will be like diving into the past for a day before being catapulted back into our century when you arrive in the traffic of Wadi Musa, the town that surrounds the ruins of Petra.

add a comment of Journey to Jordan: from Amman to Petra on the Road of the Kings