You have surely heard of the Pink lake of Senegal (aka Lake Retba). In addition to being one of the most visited places in the country of teranga (hospitality), this lake is also famous because it was the arrival point of one of the most mythical races of all time, the famous Paris-Dakar. 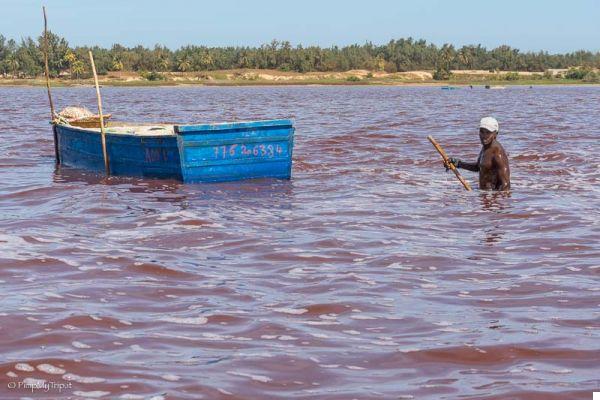 About 30 km north-east of the capital Dakar, the Lake Retba, a large shallow lagoon, located a few hundred meters from the ocean shore and surrounded by high sand dunes, certainly catches the attention of tourists for its unusual color.

For biologists, Lake Retba falls into the category of extreme environments due to its high salt concentration (80g to 300g / liter of salt per liter, more than the Dead Sea!)

Just to have a term of comparison, the salt concentration in sea water it is of the order of 32 grams per liter. 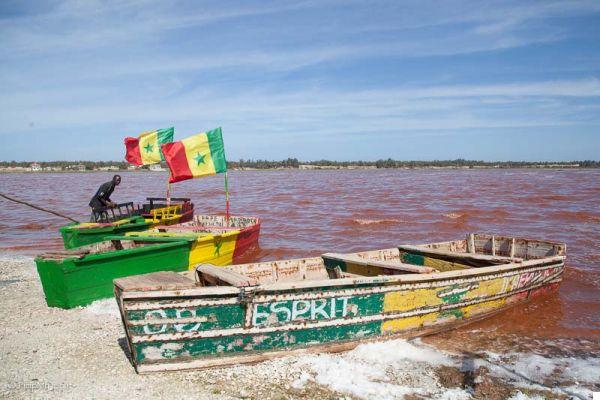 These extreme conditions, in which marine life is practically impossible, represent instead the ideal habitat for the Desulfohalobium retbaense, a halophilic bacterium which together with the alga Dunaliella Salina gives the water its particular pink color.

In any case, neither the high concentration of salt nor the presence of bacteria in it are dangerous for humans so if you want you can also swim (and float), but if you have any scratches or wounds do not do it because it will burn you a lot. ! 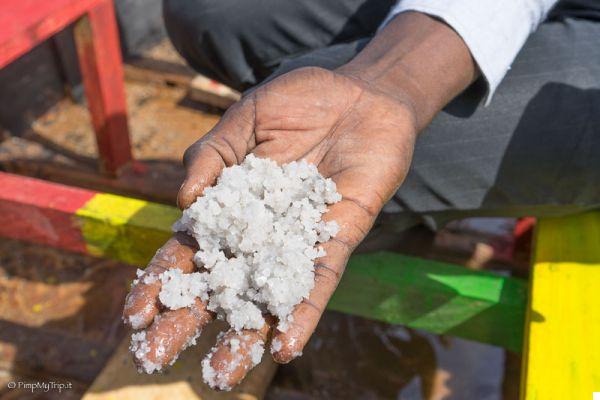 The concentration of salt in the Pink Lake is about 10 times that of sea water!


Lake Retba represents a unique and magical ecosystem that is home to rare and still little studied species and also for this reason it is under scrutiny by the World Heritage Committee for inclusion as World Heritage.

But this unique ecosystem is also deeply delicate and highly endangered due to the industrial exploitation of salt and the abusive and uncontrolled building development in its surroundings.

If in the 15th century the surface of the lake was 1976 square km, in 4 it increased to 3 square km and since then it has decreased until today with a surface area of ​​XNUMX square km today.

But let's get to the fateful question that has been asked me continuously since I have been there: the pink lake is really pink? 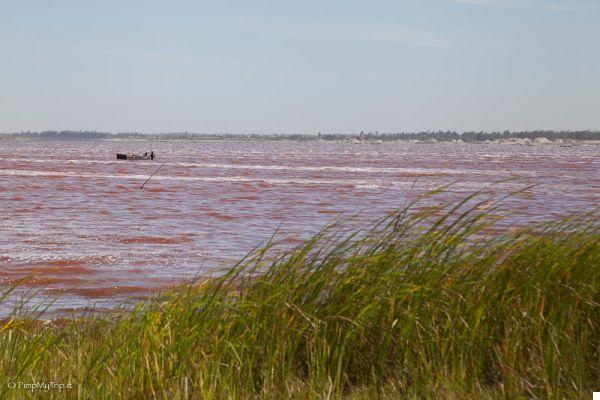 Except for some heavily photoshopped photographs that can be seen running on the web, the color of the lake varies between pink and dark red, almost a rust color. There in fact coloring varies depending on the climatic conditions: intense sun and lack of wind that ripples the surface are absolutely necessary to observe the lake in its most characteristic color.

Without these climatic conditions, on days of strong wind or rain or just cloudy days the lake will have a much darker color.

For this reason the best season to see it is our winter or during the dry season that goes from November to April.


How to reach us 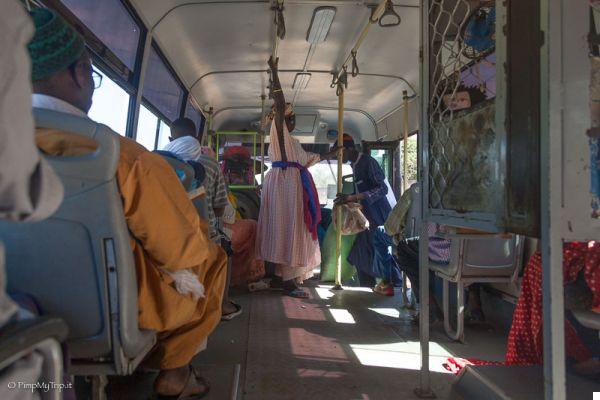 Taking a bus in Senegal is a real experience. Getting to Lake Retba from Dakar is easy and cheap

Although there are hotels around the Pink Lake to welcome tourists, I strongly recommend going there in a day from Dakar as I did because getting there by public transport is very easy.

By the way, it might interest you to know how to travel to Senegal do it yourself!

Either way you decide to get there, by bus or taxi, the journey from Dakar to the Pink Lake will take just over an hour: despite the fact that the distance is relatively short, you have to take into account both the stops and the squiggles of the buses. between the alleys of the various countries, both of the agonizing traffic of the capital of Senegal, from which to extricate oneself is a titanic undertaking.

Although we were staying not exactly in Dakar but a few kilometers away in the village of Toubab Dialaw (very close to the new international airport) we had to arrive in Dakar to take the bus.

I tried both methods, with the bus on the way and with the taxi the return and my advice is to absolutely opt for the second option.

From the center of Dakar, take the bus to the town of Keur Massar. When you arrive here you have two alternatives: walk the remaining 6 km of road that divide you from the lake or take another bus.


By taxi or rental car

By taxi, on the other hand, getting there is very simple, in fact just ask the first taxi you find on the street. Also in this case the watchword is to bargain, the price could be lowered a lot. Being Senegal my advice is negotiated but with respect.

We paid about 10 euros for the one-way trip.

However, by taxi or by car there are two options. Either follow the bus route then turn right at the Keur Massar intersection at km 20 and then take the “Boune” road, or take the National 1 and go through the town of Rufisque, then Sangalkam, then Bambilor.

As soon as you arrive at the Pink Lake you will see a small group of huts selling souvenirs and you will be immediately or almost attacked by salt and necklace vendors or by someone who wants to offer you a boat ride. 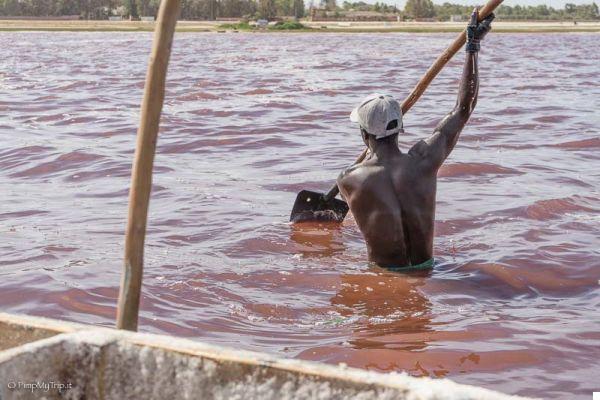 Salt harvest phase 1: the collector splits the salt that forms a crust on the bottom of the lake with a shovel

We took the tour for $ 15 for two. The tour is short, but it is interesting.
In fact, day and night, around and inside the lake there is an intense activity of dozens of people engaged in the extraction of salt (300 grams per liter). 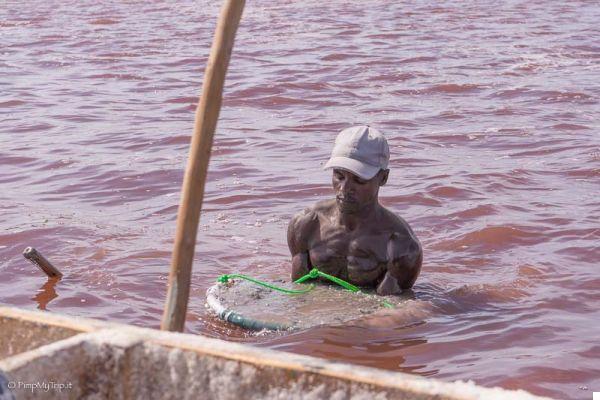 Salt collection phase two: with a woven basket the salt is loaded onto the pirogues

Submerged to the waist, the men grab the crusts of salt deposited on the bottom with a long pole and a sieve and fill the canoes which are then brought ashore to unload the salt. The women take the salt from the canoes and create mounds: the freshly extracted salt is gray and must dry to become white.

With the boat ride you will get closer to the collectors and with a small paltry tip (a couple of euros) you can take beautiful photographs and you can listen to the story of the collectors.

It is worth doing. 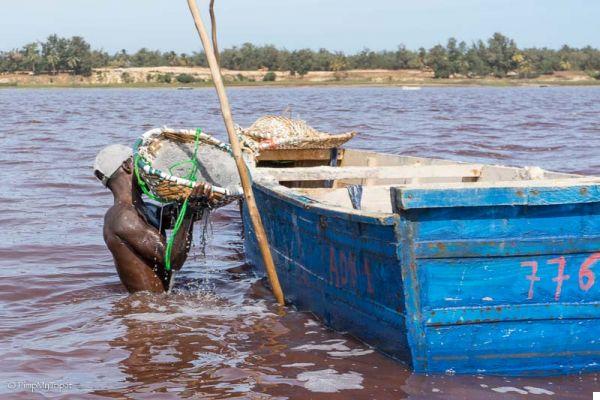 The collection of salt is free, everyone can go there to collect the salt which is then sold for two lire to the intermediaries who bring it to the city.

On the shore you will notice the great white mounds. Part of this salt is also brought into Europe: so I discovered where the salt comes from, which here in winter is used by salt spreaders on the roads to remove the ice! 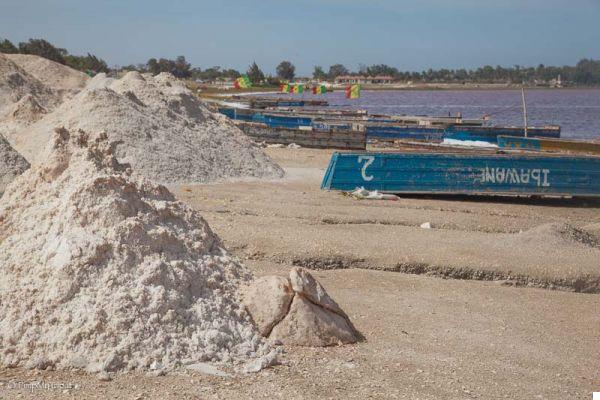 Salt collection phase 3: the salt is accumulated in mounds on the shore to dry and thus take on the white color

From here, if you want salt, you can collect a handful for free and fill yourself with a small bag as a souvenir.

What to do on Lake Retba 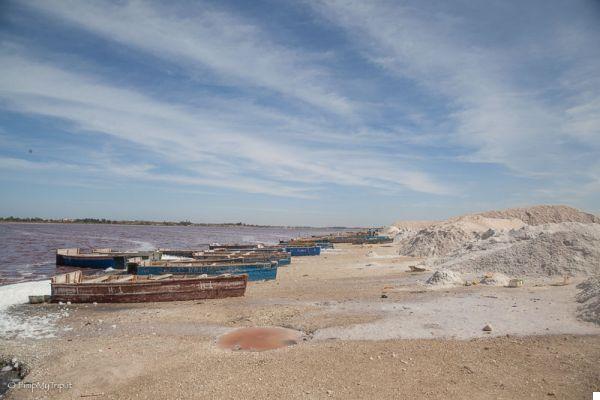 Heaps of salt to dry before being taken to the city

The Paris-Dakar has not arrived here since 2007 for security reasons, after the 2008 edition was canceled due to some terrorist attacks: it is therefore no longer possible to observe the spectacular arrival in the car dunes here on Lake Rosa. and motorcycles.

But with the birth and expansion of the tourist town of Niaga Ouolof A series of fascinating tourist activities have been created and developed: from quad biking or 4 × 4 riding on the dunes, to horseback riding or dromedary excursions, or simply trekking on foot, the choices for fun are certainly not lacking.

Other pink lakes in the world

Il Pink Lake of Senegal it is not the only lake in the world to have this particular feature.

Other pink lakes in the world are Australia on Pink Lake Hillier and Hutt Lagoon and in Canada the Dusty Rose Lake.

Also in Europe we find others: the Salina de Torrevieja e The Salina de La Mata in Spain (which boast the distinction of being the largest salt lakes in the old continent) and the spectacular Masazir Lake in Azerbaijan.

Moving on instead to South America we cannot fail to mention the Laguna Colorada In Bolivia.

Although someone was disappointed with the visit to the Lake Retba I must admit that I liked it. Regardless of the more or less pink color depending on your luck, seeing the salt extractors at work and being lucky enough to be able to chat with them was one of the truest moments of my trip to Senegal.

Blue Lagoon in Iceland: is it really worth it? ❯

When to go to Senegal, Best Month, Weather, Climate, Time

Guide and Tips for Traveling in Senegal Do It Yourself

Gorée Island: Visit of the Slave Island in 1 Day from Dakar