Blue Lagoon in Iceland: is it really worth it?

The glorious and enchanting Blue Lagoon in Iceland it is one of the most popular destinations for travelers and tour operators. We stayed there on our way to Iceland in winter and as soon as we arrived, after having looked at it for good, we decided to turn our heels and leave. In this post I'll explain why. 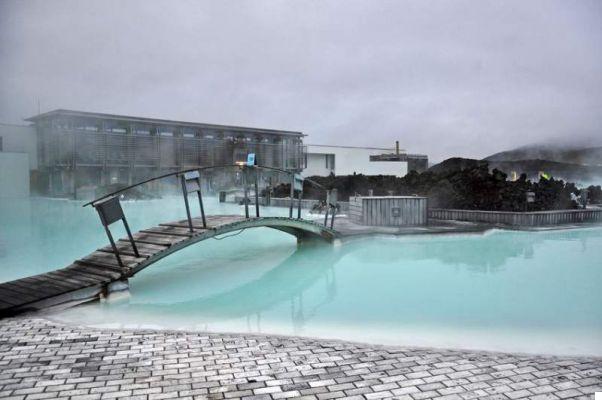 The Blue Lagoon in Iceland: you want to go there, right?

Siliceous waters, cobalt blue, hot steam, muds and miraculous creams, the blue Lagoon it is the quintessential image on all tour operator brochures and is often referred to as one of the must-sees when visiting Iceland.

It has recently undergone many renovations (and will undergo others in 2017 for the construction of a luxury hotel) to make it even bigger and welcome an ever-increasing number of visitors: it is also without a doubt one of the most great commercial successes of the island.

The structure built around the pools is futuristic, modern and full of all comforts. The changing rooms are beautiful, there are saunas and steam rooms, mud masks, relaxation areas, free shampoo and conditioner, and relaxing massages.

In short, all the best of what you could wish for. A relaxation paradise. 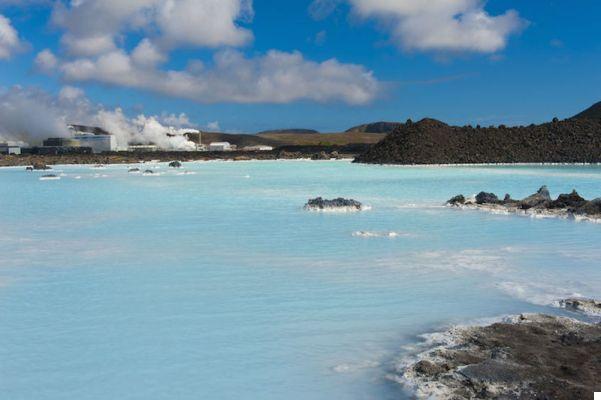 Iceland produces most of its energy from geothermal plants.

The Blue Lagoon is located in the locality of Grindavick about 40 km south of Reykjavik. In spite of all the natural spas present in Iceland, it is an artificial thermal pool built in 1976 following the construction of the Svartsengi geothermal power plant: the enchanting blue waters of the lagoon are nothing more than the discharge of the water used to operate the turbines of the power plant and produce electricity.

The waters, rich in minerals such as sulfur and silica, are subsequently cooled down to a temperature of about 40 degrees and are channeled into the pools every two days.

The water is a dull blue color, a color I have never seen anywhere in my life. As soon as I looked out from the windows of the self-service bar I was surprised by the size of the Lagoon: it is huge and everywhere there are small corners to explore, shallow pools with waterfalls, Turkish baths, saunas and even a quiet relaxation area. 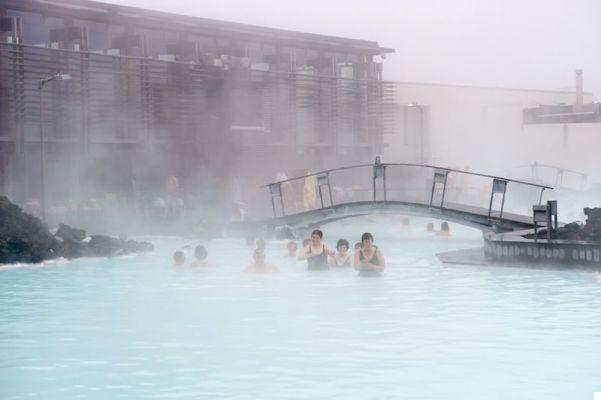 Visitors relaxing in the pools

When we arrived, a few hours before our return flight, dozens of coaches in the parking lot and a long queue at the entrance awaited us. We hadn't gotten the tickets in advance on the internet and were aware that we might have to queue up a bit. A girl walked past those who had reservations and we were left with beaten dog eyes as they passed us.

We asked for information and the reception girl looking at us with disapproval (in short, but everywhere it is written to book first!) Tells us that the wait would have been long.

A few minutes later I decide to leave the others in line and take a tour of the shopping store (which sells beauty products at the price of a jewelry store) and to go and see the non-swimming pools outside the structure. Here I met two English guys waiting for their turn and we chatted. They tell me that they arrived at three in the afternoon and that I have been in line for more than three hours.


It is almost seven o'clock, that is almost 4 hours after their arrival and I finally see them crossing the entrance turnstiles.

I went in the low season but on the weekend, probably during the other days of the week the queues are much lower.

If you decide to visit the Blue Lagoon then the reservation is a must if you want to be guaranteed to enter. In high season and on weekends it is better to book even two or three weeks in advance. 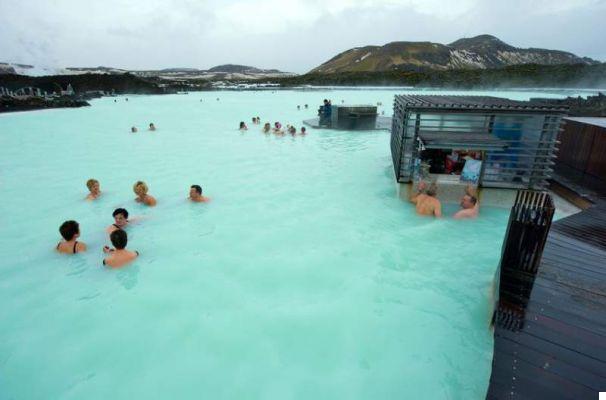 The bar which is accessed directly from the water

One of the things that all of Iceland is famous for is the level of hygiene and cleanliness.

The Icelanders have a very strict hygienic code because the water is never disinfected with chlorine and in fact to enter the Blue Lagoon you have to take a shower completely naked before you can access the pools.

While I waited, I patiently sat down in the bar and with a large beer in my hand I started looking at the thermal pools from the large windows.

But I didn't have that big impression of cleanliness: especially since you are allowed to bring drinks in the pools.

Happy, smiling kids of all ages paced back and forth in the azure waters with large plastic cups filled with wine or beer. Abandoned plastic and glasses with residues of liquid substances furnished the edges of the pools. I imagined how many of those liquids could accidentally spill into the water.

Compared to other spas in Iceland, the Blue Lagoon actually has a very high cost. Put an average of 20 euros more around just for the simple entry, but that's not all. Do you want the towel? You pay a good 4 euros. Do you want the mud mask? You pay for it. Do you want a massage? You pay for it! It is true that in almost all spas it is like this, but here everything costs more than in other parts.

But there is one thing in favor: if you look closely you can find buckets on the edges of the pools with mineral muds that can be applied totally free.

Too commercial and crowded 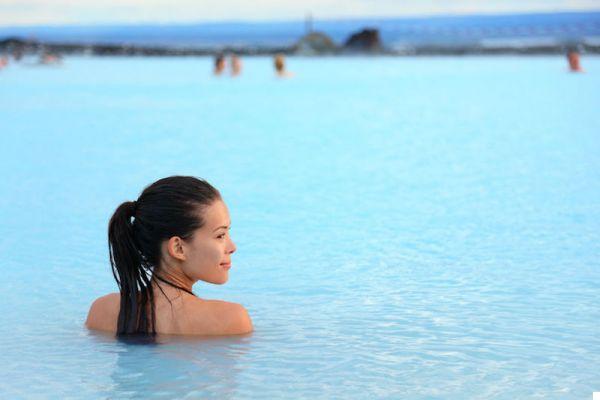 A cover image from the Blue Lagoon

I don't know if it's since they enlarged it that it has become so much tourist and commercial.

After all, if it is one of the most visited places in all of Iceland, you cannot expect to visit it alone and enjoy peace and silence. Dozens (if not hundreds) of people go back and forth in the water with their glasses of beer (there is also a bar that can be accessed directly from the water), guys who take selfies probably destining their smartphones to death slow and agonizing, people who come here to take care of themselves for the fame of the mud that seems to really do very good for the skin.

Anyone who enters the Blue Lagoon must wear an electronic bracelet: the bracelet is different depending on the package you bought and with that you do everything, including buying beer at the bar. 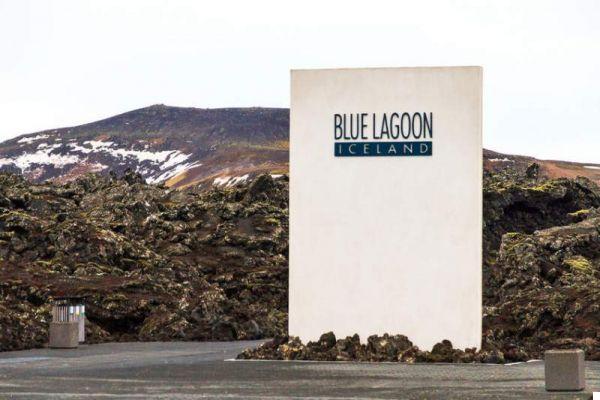 Welcome to the Blue Lagoon

The Blue Lagoon is located about 40 km south of Reykjavik, and is much closer to Keflavik International Airport than to the capital. The location of the pools is perfect for a relaxing stop before taking the flight and most tourists do just that, as well as organized travel coaches.

Getting there is very easy: from the expressway that connects the capital and the airport, take the detour indicated by the “Blue Lagoon” sign and drive for another 10 km.

Very convenient for those who have rented the car and must return it to the airport before departure.

Learn more! How to drive safely in Iceland

If, on the other hand, you don't have a rental car, the Blue Lagoon has organized daily bus transports from both Reykjavik and Keflavik: practically throughout the year there is a bus every hour.

Packages that include transport and entry to the pools are also sold by Gray Line Iceland and Bustravel Iceland.

It is also possible to organize private transport by taxi, but save your wallet and don't do it, it costs a lot!

Ok, let's get to the painful part of it: the cost of the Blue Lagoon is high compared to other spas.

The best thing (and the only one that guarantees 100% entry to the spa) is to book your ticket online. You can buy it directly from Official site.

The cost, as I said, is high: it starts from 40 euros for just the entrance to almost 200 euros for the luxury package which also includes mud masks, the entrance to the LAVA restaurant, a drink and a package of products. To these packages it is then possible to add other additional treatments, massages, muds, beauty masks, all at an additional price!

The cost also varies according to the period in which you go, in summer they are higher than in winter.

Times and when to go

The Blue Lagoon is open every day of the year, 365 out of 365. If you really want to go there also at Christmas and New Year, you can do it. The opening hours vary slightly from day to day and from season to season: in summer, from July to August 21st it is open until midnight.

If, like me, you decide that it is not worth it but you still want (and rightly so !!!) to try spas, there are many alternative natural spas and spas to the Blue Lagoon.

Here I have collected a small list of the best chosen by travelers.

Certainly one of the most similar alternatives is the Myatvn hot springs. The younger sisters, even if these are not natural too, are beautiful and organized but less touristy, less crowded and above all less expensive (admission about 25 euros).

Like all the best things, getting here is not easy, but all your effort will be rewarded by a wonderful natural spectacle: multicolored mountains, blue lakes and expanses of lava. the whole area is characterized by thermal pools surrounded by nature. Not to be missed if you have a 4 × 4 to get there.

Located in the small village of Fludir in the area of Golden circle  Secret Lagoon it has been kept as natural as possible so that visitors can enjoy the true Icelandic feeling! From the natural pools you can also see a small geyser that gives small eruptions every 5 minutes and in winter it is possible to stay late to observe the northern lights.

Maybe you are interested in reading: Northern lights in Iceland, how, where and when to see them.

The enchanting cave of Grjótagjá

So beautiful that it was one of the locations where some Game of Thrones scenes were filmed, this hot spring is located in a cave that looks like it came straight out of a fantasy movie. It is not always possible to bathe in it because the water temperature varies a lot and sometimes has even reached 100 degrees.

A tip: some rumors among the locals say that in the area there is another cave known to a select few that seems to be wonderful. Just to protect it I will not write here where it is, ask the locals!

Where have I been Fontana it is one of the oldest spas. It's not that big, but here you will find anything you want, from the Turkish bath to the saunas, to different pools with water at different temperatures and finally a splendid buffet (extra cost).

In the end I didn't go in and I went back to the hotel waiting for the next morning's flight.

I just know that if I went back to Iceland I probably wouldn't go there again. The Blue Lagoon is artificial and there are many spas, beautiful, peaceful, natural and less famous. And they cost less.

It is really worth it to visit blue Lagoon? have you been there? Leave your comment and tell me your experience and what you think!

The 10 Best Things to Do in Svalbard ❯

add a comment of Blue Lagoon in Iceland: is it really worth it?