Guide and Tips for Traveling in Iceland 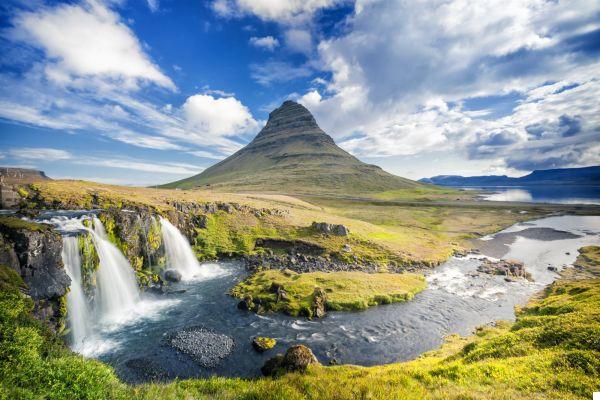 To say that theIceland is a magical land is an understatement: if possible even something more. A small village (in the shape of a fish) lost in a cold sea, with a schizophrenic weather, wonderful views, the northern lights, the midnight sun (but by refraction!), Fjords, volcanoes, whales and killer whales . Incredible that a small island like this has contained so many wonders. Yet it is so: it is Iceland.

While rising prices and hordes of visitors are somehow jeopardizing a practically perfect trip (as well as threatening a fragile ecosystem), this land remains magnificent and (almost) never disappoints anyone. With this short guide I try to give you some advice to organize a trip to the Land of Ice and Fire.

If you go in winter I recommend that you also read How to plan a trip to Iceland in winter.

If you travel to Iceland, always take out travel insurance: I recommend Heymondo and if book from this link you have an exclusive 10% discount for the readers of this blog.

When to go: Iceland offers everything in any season of the year, but me I would strongly avoid the months of August (for the crowd: think that last year in August Iceland had 1,5 million visitors), December and January for the cold and the dark. The best months, on the other hand, are certainly from March to June e from September to November when temperatures are good, tourists are few and prices are lower.

Money, Credit Cards and ATMs: the currency is the Icelandic krona. Credit cards are accepted but ATMs are not everywhere. Better to have a little spare swag.

Safety: security is at a high level. The biggest dangers are more than anything else related to driving, especially in winter with icy roads and above all because speed limits are often exceeded. To know more you can read how to drive safely on the road in Iceland.

Public transport and transportation: even if the public transport network is developed and quite efficient, the best way to travel in Iceland is always the car at any time of the year. In fact, there are so many detours to do to see beautiful things that going there by bus is unthinkable, it would take too long. Rental car (or camper) all their own life.

How much does it cost to travel to Iceland?

Hotels and hostels: Due to the shortage of accommodation in Iceland (especially in August) the prices are high. Fortunately, to meet the demand of a booming tourism, there are now also accommodations in private apartments on Airbnb.

However, prices vary a lot depending on the season. While in the low season there are also double rooms with bathroom for 70 euros, it is very difficult to find the same price in the high season. Guest houses are usually converted private homes and have lower prices, but often the bathroom is shared.


The hostels are clean and efficient but expect to pay as much as 20 euros for a bed in a shared dormitory.

Restaurants: here too the prices are quite high, expect to pay around 20 euros each for a dish and a beer. There are also cheap solutions but they are generally "fast foods" such as sandwiches and pizza slices.

Even if it is located just just below the Arctic Circle Iceland, thanks to the Gulf Stream, can be said to have no great difference in temperatures between one season and another. Winters aren't as cold as you might think (but damn that wind blows) and summers are cold.

Read also how to dress in Iceland in winter

The real boredom if you can say so is that in Iceland the climatic conditions are often schizophrenic with rain, sun, snow and hail on the same day. This means that you have to leave ready to face anything.

What to do and what to see in Iceland

Although small, Iceland is a concentrate of wonders: it is really difficult to list them all. This is the list of what I consider top and which in my opinion is not to be missed.

Jökulsárlón glacier lagoon: this glacial lake (the largest in Iceland) is located in the south-east of the island and is one of the best known and most popular tourist destinations (it was also a location for the Batman Begins movie!). The best way to enjoy it is to sit on the banks in silence listening to the icebergs that collide with each other and break.

Drive on the Golden Circle: spend a day starting from Reykjavik on the “Golden Circle. Visit the National Park of Thingvellir, get ready for the thrill of seeing a geyser and be enchanted by the beauty of the Golden Falls.

Terms of Lake Mývatn: quieter and cheaper the spas of Lake Mývatn are the valid alternative to the famous Blue Lagoon. Relax here by letting yourself float in the warm, blue waters. The water flows from the subsoil at 37–39 ° C.

Relax at the Blue Lagoon near Reykyavik: the famous spa is the dream of many tourists. For this reason it is really crowded. I went there, saw the situation and turned around, but for some it is still truly unmissable.

Visit West Iceland in the footsteps of the ancient Icelandic sagas: the western part of Iceland was ranked among the Best in Travel by Lonely Planet and not surprisingly. The National park of Snaefellsnes peninsula is an enchantment (it inspired Giulio Verne in his Journey to the Center of the Earth), not to mention the Kirkjufell, the most photographed mountain in the country.

Before leaving for the West, however, read the ancient sagas and visit the places where they were told to children, passing them from father to son.

Visit the numerous waterfalls: "Foss" means "waterfall" in Icelandic and during your on the road you will find many. Seljalandsfoss, Skogafoss, Svartifoss, Goðafoss, Dettifoss and Gullfoss (on the Golden Circle) are the most famous and visited.

Spot the killer whale and whales: in addition to the magic of seeing the great predators of the sea, the killer whales, they taught me three very important things. The Whale Watching it's not like going to the aquarium: the sea is often rough, it can get cold and above all no one guarantees you sightings (even if in the right season they are practically guaranteed). What can you do with it, nature does what it likes. All time.

Go hunting for the Aurora Borealis: well even if in Iceland it is not easy to see it due to the bizarre weather and the blankets of clouds, surely if you happen to see it you will not forget it so easily. Organizing a trip to Iceland in winter shouldn't be done just for the aurora: the country is gorgeous and in winter it releases all its magic.

Go for a walk on an Icelandic pony: not only is the Icelandic pony the most tender in the world, but it is also the only one that does the tolt (a very particular trot step). You don't want to not try it, do you?

Explore the Skaftafell Ice Cave in Vatnajökull National Park: experience the thrill of being in a world made only of blue! Trekking of one or more days are organized in these underground caves made entirely of ice, but book in advance because they are often "full". Only in winter.

Take an excursion from Reykjavik: even if you decide to "base" in Reykjavik don't worry, there are some wonderful tours to take part in such as snorkeling in the Silfra fissure, visiting the magma chamber of a volcano or entering a tunnel inside a glacier!

Do a lot, a lot of trekking: I could mention many interesting treks, Iceland deserves to be covered all on foot.

Tips for a trip to Iceland

1 - Choose carefully what to do and plan ahead

There are so many activities to do but tours are expensive and can add up quickly, so choose wisely. For example, you will need to take a tour if you want to walk the glacier, but if you just want to see the glacier, you can do it on your own.

The same goes for the iceberg lagoon - you can see many icebergs from the beach, but if you want to see them up close you have to take a boat ride.

If you are planning a trip to Iceland, plan and book both tours and hotels well in advance. Seriously. The best hotels (in terms of value for money) go away like hotcakes and are often sold out 6 months earlier.

2 - If you go in the summer, choose the campsite

There is no better way to spend a summer night in Iceland than in a tent.

Camping is a safe way to get and maintain the necessary contact with nature. Nothing comes close to the experience of lying in your sleeping bag after a long day of travel while being lulled by the evening singing of the wildlife.

The only thing, remember that in summer there is a lot of light, so don't forget to bring an eye mask!

Simply because you won't need it! In Iceland, as well as in other Nordic countries you can pay almost everything with your credit card.

Obviously you need a few coins: for example in the Thingvellir Park you pay for the use of the bathroom. It might be absurd to pay a few cents with your credit card, especially if you pay us commissions.

For the rest, you can really pay for everything with your card: tours, rental cars, hotels, in short, anything!

I have rented a camper in Iceland, but especially in the summer, it is certainly not the best choice.

In winter, the roads can be icy. Apart from the danger (even if our camper had spiked wheels) the fact is that the camper does not allow you to travel some routes. We were stuck on a road while those who had 4 × 4 went almost everywhere.

In the summer the same. A 4 × 4 gives you much more freedom than a camper. You will also be able to travel along unpaved or bumpy roads.

Beware that in Iceland until a few years ago, there was a kind of freedom for which people used the 4 × 4 to go off-road: don't do it because it destroys the local fauna and flora. Now it is what has been regulated, but the controls are not everywhere, therefore travel responsibly!

Guide and Tips for Traveling in Senegal Do It Yourself ❯

add a comment of Guide and Tips for Traveling in Iceland