When I left for the trip to Iceland I did it with a double mission: to visit the West of the country and learn about its history through the Viking sagas which actually took place right here a few thousand years ago. 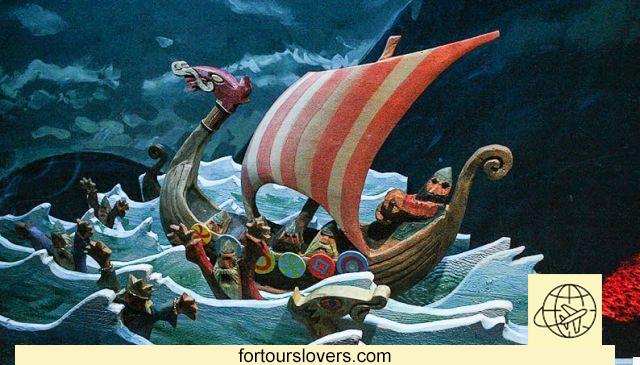 Vikings at the Settlement Center in Borgarnes

Iceland was practically uninhabited when the Vikings arrived in the XNUMXth century and found before their eyes a spectacular but difficult country, with a sometimes violent landscape characterized by jagged faults, deep gorges and ridges, volcanoes and glaciers, in stark contrast to the its hills, the bubbling streams and thundering waterfalls.
Iceland is a harsh country that sometimes does not forgive with its long, dark and freezing winters, however mitigated by mild summers when the sunlight almost never disappears. But although life must have been dangerous in the first human settlements, the Icelanders have created an extraordinarily rich culture, accompanied by fervent political activity: here in fact in the Thingvellir Park (which you can visit driving along the Golden Circle), one of the first national parliaments was established, a precursor of what is modern democracy.

Even if today there are very few archaeological finds from those ancient centuries, the Viking tradition has nevertheless been handed down from father to son through stories, poems and songs that still today, as then, are still told to children to illuminate and brighten the long nights. winter.
Icelandic sagas are not just stories of men and women who came to live in a difficult country, they are the true identity of Iceland.

Some of the best known sagas in the world are set in the West of Iceland and today they represent an alternative way to explore this part of the country, while learning its history and culture. Most of the most famous sagas such as the Saga in Egil, Laxdaela (a female saga and in my opinion one of the most exciting) e Eyrbyggja to the point of renaming this area "Sagaland" and in recent years a lot has been done to keep intact the great cultural heritage that concerns the sagas of this area.

During our road trip we have touched upon some of these points and practically every agency in Rejkyavik organizes organized tours of one or two days.

Borgarnes and the Settlement Center 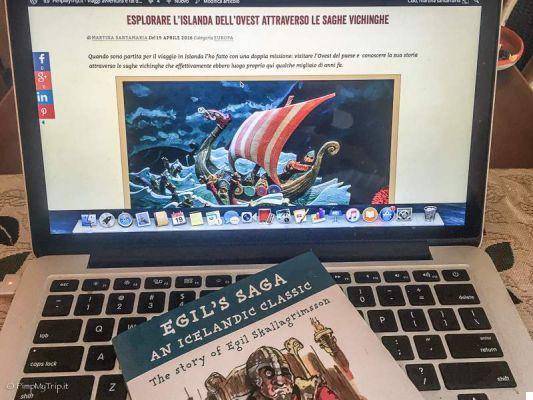 The Egil saga that I read before leaving for the trip to Iceland in search of the Vikings!

Our first stop during the trip was in Borgarnes, a small town with a great Viking tradition behind it, about 75 km from the capital Reykjavik.

Al Settlement Center of Borgarnes an exhibition is set up that tells the Saga of Egil Skallagrímsson and that guides the visitor in an adventurous labyrinth with audio guides (in 14 different languages) and a channel specially for children. A complete tour of the exhibition takes about half an hour.
I had read Egil's saga before visiting the museum and couldn't wait to see how history was portrayed in this small museum: in this case, the theatrical sensibility of the founders has created an experience that will be appreciated by anyone who goes to visit it.

In history battles and love stories, magic and pagan tradition are intertwined. The Egil saga provides an accurate description of how the men who arrived in Iceland were able to take their first steps in this difficult territory. Through modern technology, the museum tries to revive the visitor's sense of what it must have been like to arrive in Iceland in those remote times and the difficulties families faced.


As much as I enjoyed the upper floor, it was the Egil Saga exhibition on the lower floor that really got me excited.

Egil Skallagrímmson was a Viking poet and murderer, in short, a kind of maniac, whose story is told in one of the most fascinating Icelandic sagas. Egil is in fact one of the first anti-heroes of Western literature: horribly ugly, cruel and prone to outrageous attacks of violence, but at the same time he is also a talented poet, very intelligent and faithful to what he believes in. 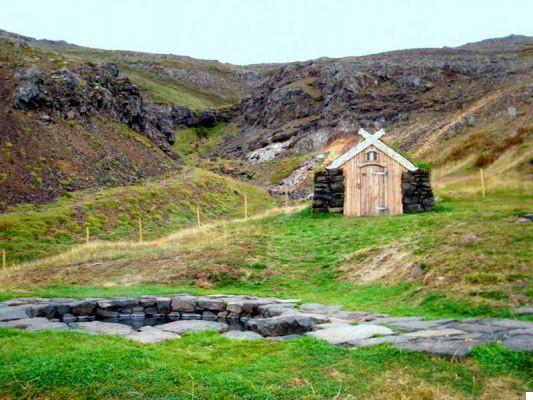 Another place to visit and which refers to another Viking Saga is Guðrún pool which means "Gudrun's pool". It is a geothermal pool located in the Sælingsdalur valley and according to the History of Laxdæla (one of the most important Icelandic sagas), Gudrun Osvifursdóttir, the protagonist, lived here over a thousand years ago and used to bathe in this pool of hot water. The original pool was destroyed by a landslide and rebuilt with natural materials and dry stone without mortar to resemble as closely as possible what it must have looked like during the Viking era.
Today the swimming pool is one of the biggest tourist attractions in the Dalasylsa municipality.

The Saga, which occupies a place of absolute importance for its poetic beauty, tells the tormented story of a Norwegian clan who was the first colonizer of West Iceland, in the Laxá valley, the Salmon River.

But this saga owes its special fame above all to the role played by women: the great matriarch Unnr, who leads the family from Scotland to the Faroe Islands before settling permanently on Icelandic soil; the slave Melkorka, who pretends to be mute so as not to reveal to her master and lover that she is the daughter of a king of Ireland, but above all Gudrún, "the most beautiful woman who was ever born in the land of Iceland", proud, passionate and "Feminist", one of the most popular and fascinating heroines of the ancient sagas. The protagonist of a drama of love and revenge that will lead Kjartan and Bolli, fraternal friends, to fight each other to the death, Gudrún will close himself in a painful loneliness, ending his days as a hermit nun. 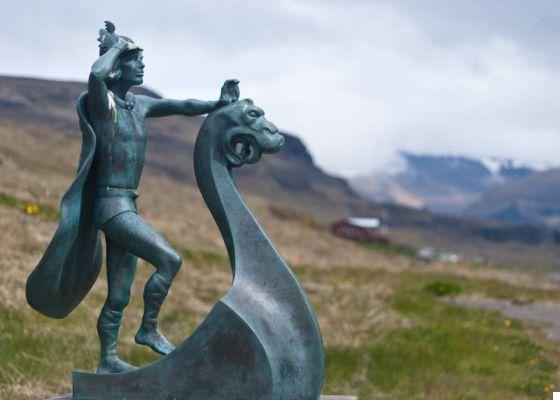 The monument dedicated to Leif the Lucky, son of Erik the Red

Another unmissable stop to dive back into the Viking era and that anyone traveling to West Iceland cannot miss is the Eiríksstaðir Long House, the reconstruction, on the original ruins of what was once the home of the famous Erik the Red (from the color of his hair) and his wife Thjodhildr: in this house it is said that his son, Leif the Fortunate, was born, the first European to discover America, about 5 centuries before Christopher Columbus set foot on it. Leif Erikson was in fact the first to explore Vinland, the northern part of the island of Newfoundland, a Canadian island in the Atlantic Ocean: the story of the discovery of Newfoundland, which was believed to be a legend, has been confirmed by the fairly recent discovery of some Viking tombs from the XNUMXth century.

Even Erik the Red is not really a saint's shin, exiled first from Norway for murder and then from Iceland for another murder, he landed on the southern coast of Greenland where he founded his own settlement, in the fjord that took his name: Eriksfjord. He died during the first winter his son set out on his explorations and Leif knew nothing of his father's death until he returned to Greenland.
The house is built and furnished like an ancient Viking house and the fire that comes on and burns inside helps to make the atmosphere even more real. Boys in Viking costumes tell the saga of Erik the Red and the stories of the Vikings who lived in this area.

Fun fact: did you know that Viking helmets did not have horns? In fact, a single helmet has never been found that had them: the Vikings used horns to drink and to make tools, but not to decorate their helmets.

It is believed that about twenty people lived in this house at the same time and only the women possessed the keys to the pantry, where men were not allowed to go (also because it seems that they were terribly hungry and devoured everything edible came within reach. ).

To get to the Eiríksstaðir Long House from Reykjavic, you must always arrive in Búðardalur, the nearest village (about 15 km), from there you can follow the signs for the birthplace of Leif the Lucky.

Garda by bike: 4 routes not to be missed ❯

Where to Stay in Reykjavik: Guide to the Best Areas and Hotels

Guide and Tips for Traveling in Iceland

How to Dress in Iceland in Winter: What to Pack?