It has been a long time since I dreamed of visiting the Wadi Rum, the largest desert in Jordan: I didn't know when, but I knew that sooner or later in my life a tour in the dunes of Lawrence of Arabia would do it. 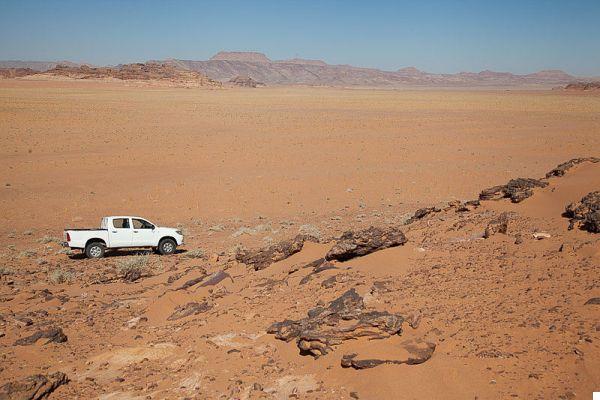 And so on the third day of our brief trip to Jordan, the opportunity arose to do a morning tour and we jumped at it. Many prefer to stop even one night to sleep in Wadi Rum in the tented camps, despite perhaps a bit of a touristy "Bedouin experience", but we didn't have enough time available so we had to settle for just one taste of this small but heterogeneous desert.

It took millions of years and an unstable tectonic situation to create what is now this kaleidoscopic desert. In ancient times, great tectonic events pushed mighty sandstone massifs out of the earth's crust which were then shaped by time and wind to give life to niches, pinnacles and majestic rock formations that emerge from a sea made up of infinite expanses of sand that, depending on the light, change their color, from white to pink, from red to orange.

Wadi in Arabic it means "valley". 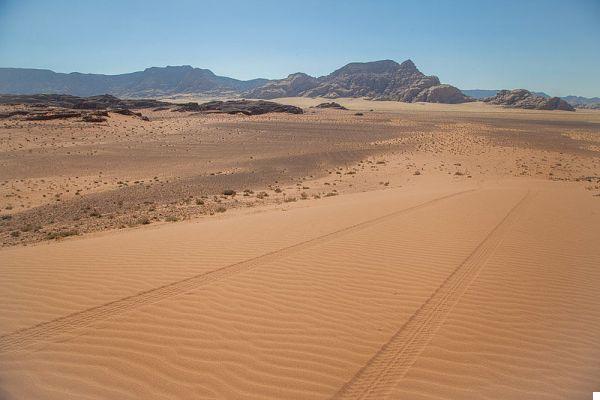 Tracks in the Jordanian desert

Audh, our guide, shows up on time in front of our hotel in Petra. In total there are 6 of us so we have to squeeze a little bit on the Toyota pickup, but the road is beautiful and the journey is pleasant. From Petra it takes almost two hours to get to Wadi Rum, but we take it slow, stopping to take pictures every time we see a beautiful view or something interesting from the window of the 4 × 4.

We begin our tour in the Wadi Rum desert by stopping at the top of a dune from which you can observe a beautiful view: from here on we will have Audh's permission to stay in the box behind the pickup. Ours more than a tour in the desert was a real adventure lived on the skin, under the scorching sun and with the dry air in your hair, one of those adventures you never forget. 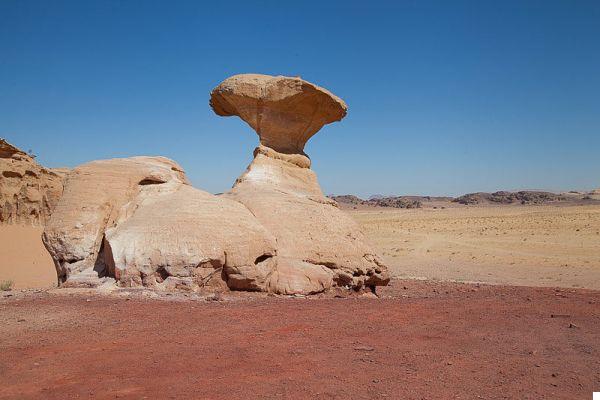 The next stops will be to stop and see some rock formations, created in thousands of years by erosion and in particular the famous arches for which Wadi Rum is famous: one of these is the Rock Bridge, the photograph of the desert that each of us would like to take home. I had read on the web that given its small size, Wadi Rum is often very crowded: it will be due to the political situation in the Middle East a bit messed up, the fact is that we will not meet a soul for the whole morning and we will have the show of the desert all just for us. No queues to photograph, no strange contosionisms to avoid including unknown tourists in the shots, for us Wadi Rum was just peace, infinite spaces, silence and solitude, just like the desert should be!

Contrary to what one might think of a place as pleasant and inhospitable as the desert, Wadi Rum has always been inhabited and this is demonstrated by the more than 30.000 petroglyphs that can be found engraved on the soft sandstone, some of which go to the discovery during the tour. The most famous are those of Khazali Canyon, a small fascinating canyon "decorated" with Nabataean rock inscriptions, some of which date back to the XNUMXth century BC. I remain caught observing all this, wondering how it is possible that these inscriptions have remained here all this time practically untouched while the wind and erosion changed the whole geomorphology of the surrounding landscape.

But we all know that the hours sometimes go really too fast (when you're having fun). Audh drives his pickup with us in the back box quietly and in total safety and stops whenever he wants to show us something interesting or worth photographing. 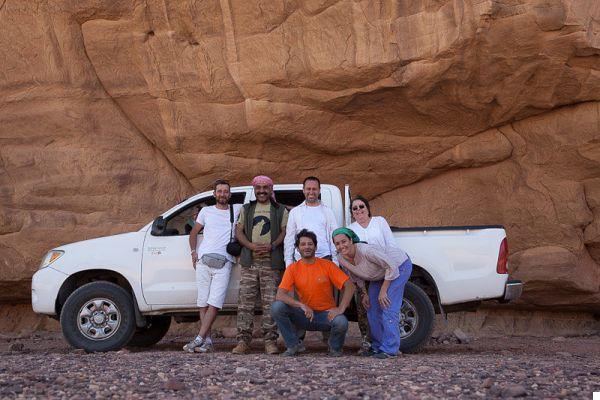 We also make a stop on the sand dunes for the 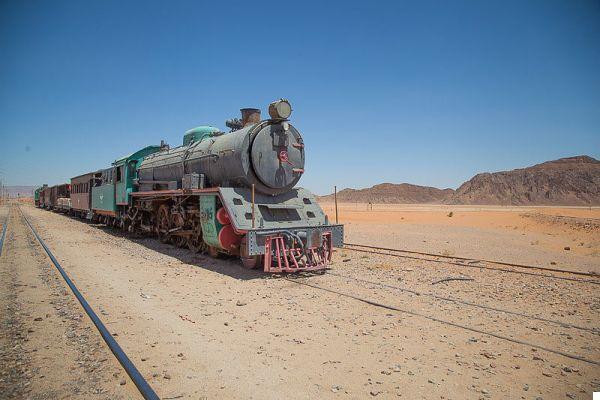 The train in the desert

They say that first love is never forgotten and that's what I think every time I go back to the desert. It happens that there are moments in life when we realize that something snaps inside us and we immediately acquire the awareness that from that moment our life will never be the same again. This happened to me, very strong, the first time I saw the desert and it still happens every time I go back. 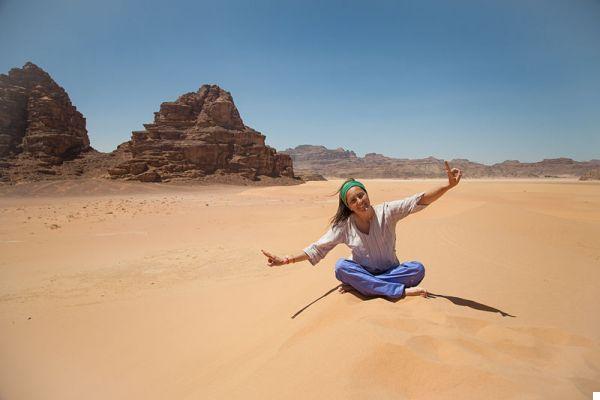 In fact, it is exactly when I saw the Sahara for the first time that I realized that what I wanted to do in my life was to travel: standing there in front of that immensity of sand I realized how dramatically beautiful our world was and how small we are compared to the greatness of nature. 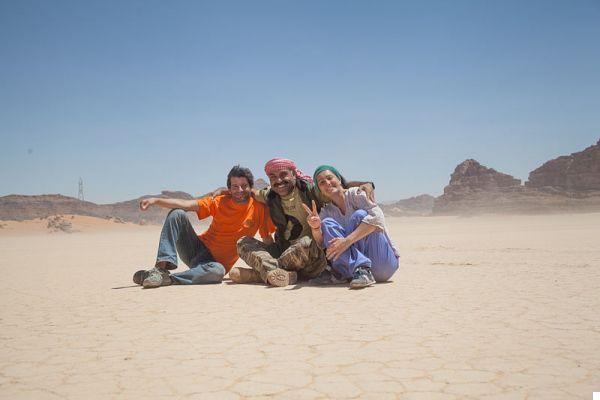 We with Audh our guide

The desert is one of the most pleasant and difficult places where you can find yourself: during the day the heat kills you, the sand moved by the wind gets in everywhere even if you are covered from head to toe and the sunsets are really fiery, while at night the cold freezes your bones and gives you the clearest starry sky imaginable.

And then one cannot but admit that in the desert, as in the sea, a sense of freedom always prevails over everyone that is difficult to feel elsewhere: the same infinite sense of freedom that I feel every time I return to these places that I love so much, like I tried it in Wadi Rum, thrown on the back of a pick up with just sun, dust and inevitably our laughter around. 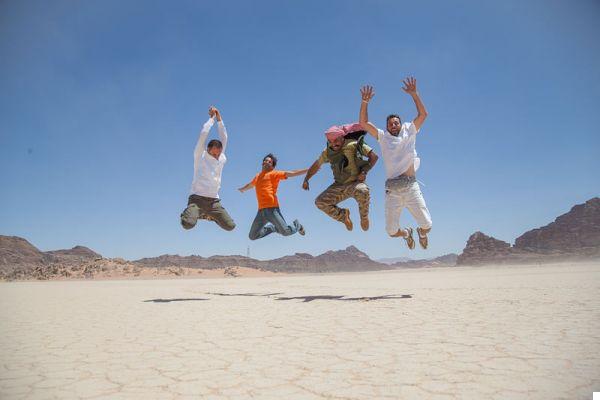 Jump in the desert

Improviser or planner, what traveler are you? ❯