What to see in Brussels: attractions not to be missed

There are many places to see in Brussels, the political capital of the European Union. This quiet city, filled with museums, parks, historic buildings and famous for chocolate, craft beer and one of the most beautiful squares in the world, the Grand Place, is one of those destinations that never disappoints.

Although we could say that one weekend is enough to discover its main places, it is advisable to have more days to be able to visit other beautiful Belgian cities, which are a perfect complement to Brussels.

Fortunately, this beautiful place is very well connected and it is easy to find very cheap plane tickets. Find out and find here i cheapest flights to Brussels.

How to get to Brussels from the airport

It is very easy to get to the center of Brussels from the Brussels national airport, Zaventem, as it is very well connected with train, which takes just 15 minutes to stop at the city's main stations, Gare du Nord, Gare Centrale and Gare du Midi, and costs just € 5,40.

In our opinion it is the most recommended option, given that the bus, although it has very frequent departures, it has a journey that takes about 40 minutes and costs € 3.

You can also arrive by taxi with a cost of € 22 or more, depending on the area you want to arrive in.

Some low cost flights land atCharleroi airport, which is 55 km away. In this case, it is better to take the bus which takes about 40 minutes and costs € 10,50, as the other option is to take a bus to the city of Charleroi, and from there the train connecting to Brussels, option that ends to be longer and more expensive.

And to get around the city you can buy the Brussels Card and use the STIB public transport network by traveling for free in the city.

What to see in Brussels 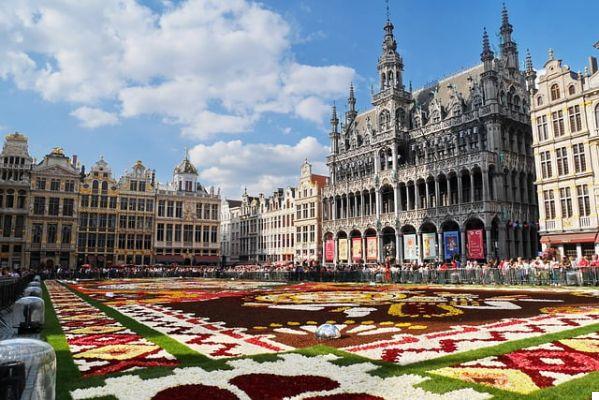 The Grand Place (Grote Markt in flamenco) is the geographical, historical and commercial heart of Brussels as well one of the most important squares in Europe. This lively cobbled square is part of the most beautiful 17th-century architectural ensemble in Belgium.

In the year 1695 the guns of the French army destroyed most of the buildings in the square and all had to be rebuilt later, with the exception of the town hall.

Declared a World Heritage Site by UNESCO in 1998, the square is known for the buildings of different styles that surround it, including the houses of the guilds, the Maison du Roi, the Maison des Ducs de Brabant, Le Piegeon where the novelist Víctor Hugo remained during his exile and the town hall or the Hotel de Ville.

The 96 meters high town hall stands out from the rest of the buildings. In its upper part we can see a five-meter statue representing the archangel Saint Michael, patron saint of Brussels.

Every two years in August the square is covered with flowers which form a beautiful floral carpet, so this month becomes a good time to travel to Brussels.

After visiting the Grand Place, be sure to also see the historic center of Brussels and its medieval, Gothic and Renaissance buildings. Head towards the Place de la Bourse, and enter one of the narrow passages, typical of Brussels.

Also visit the Place Brugmann, the Avenue Molière, the Avenue Louis Lepoutre and the Abbaye de la Cambre, or the hotels listed in the UNESCO World Heritage, such as Hotel Tassel or Solvay.

Near the Grand Place is another attraction to see in Brussels, the statue of Manneken Pis from the year 1619. The small bronze statue of a child urinating in a fountain is always surrounded by crowds of tourists photographing it from every angle, so if you want to get a good look at it, it's best to go early in the morning.

Everyone who sees it for the first time is surprised at how small it is, since the 50th century statue is only XNUMX centimeters tall.

One of the things that draws the attention of the Manneken Pis the most are the different costumes with which they dress the child, because even if it seems strange, it has a wardrobe with more than 800 pieces, to wear depending on the party or celebration.

In an alley, near the Grand Place and in the opposite direction of the Manneken Pis, there is Jeanneke pis, its female version. And if you haven't had enough you can always search Zinneke Pis, the canine version. 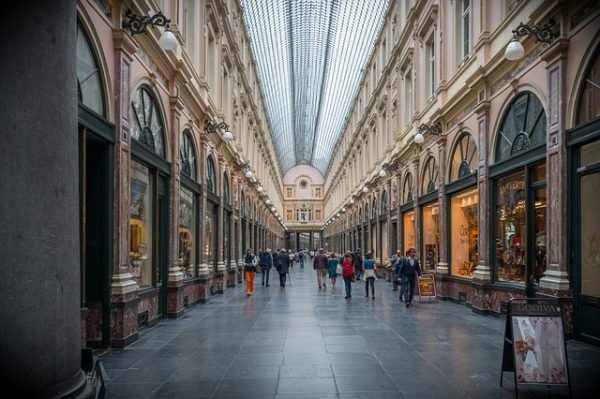 The galleries of Saint Hubert are a place of interest that you cannot miss once in the city. They were built in 1846 by order of the king to protect the inhabitants of Brussels from the rain during their purchases. Symbol of Belgium, were the first commercial galleries in Europe.


Built in 1846, this urban passage, about 200 meters long, is covered by a huge crystal dome and consists of 3 galleries: the King's Gallery, the Queen's Gallery and the Princes' Gallery.

Inside the galleries you will not find commercial brands, but specialized and luxury shops. Chocolatiers, jewelers, bookshops and even terraces, a cinema, a theater and the Museum of letters and manuscripts.

The Saint Hubert Galleries connect the zona del Teatro de la Monnaie with the Grand Place, creating a connection between the historical part of Brussels and the more modern area. The galleries can be accessed from the Rue du Marché aux Herbes, the Rue des Bouchers or the Rue de l'Ecuyer.

The Cathedral of St Michael and St Gudula is one of the most emblematic buildings to see in Brussels. Considered the main Catholic church in the country, began to be built in the Gothic style in the 13th century, with its beautiful stained glass windows, some of which have been preserved since 1540. 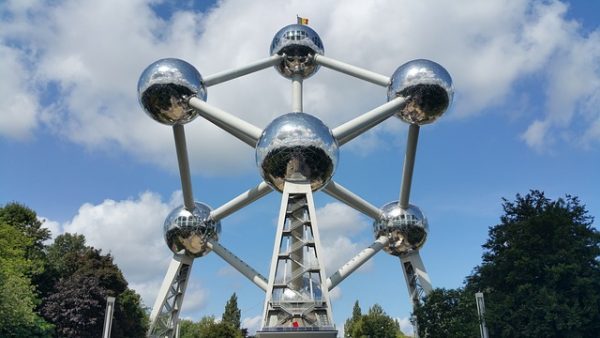 THEAtomium of Brussels was built for the Universal Exposition which was held in the European capital in 1958. As it happened with the Eiffel Tower, it suffered a lot of criticism in its construction, nevertheless, today it is one of the main attractions to see in Brussels.

With its 103 meters of height it represents an iron atom increased by 165 billion times. From the upper sphere, which houses a restaurant, it is possible to contemplate a spectacular view of Brussels. But more than the content or the exhibitions the interesting thing is the design by André Waterkeyn, the nine spheres of 18 meters in diameter represent the nine provinces of Belgium.

Located a bit far from the center, in the Koekelberg district, the Sacre Coeur Basilica is another must see place in Brussels. This Art Deco jewel is the fifth largest church in the world with 167 meters long and 89 meters high.

Built in 1905 by order of King Leopold II, it stands out for its large green dome and two circular towers. Inside, its stained glass windows are impressive and you can go up to the terrace to enjoy one of the best views of Brussels. 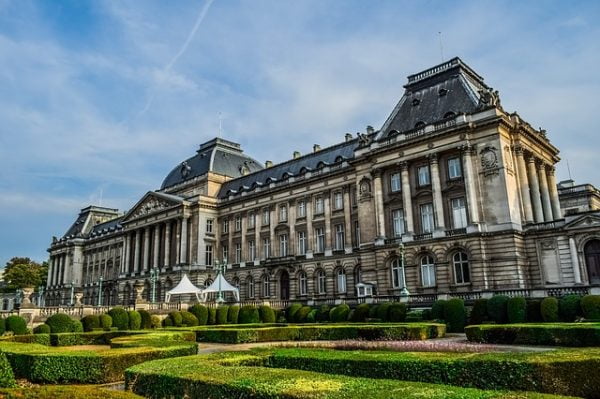 The Royal Palace was for a long time the residence of the Belgian kings, although it is currently only the seat of the offices of the Belgian monarchy. The royal family lives in Laeken Castle.

It was built by King William XIX, but underwent many restorations, until it reached its present appearance. Inside the palace you can visit the great white marble staircase and various rooms, such as the Goya room, the hall of mirrors or the throne room.

Outside, the French-style XNUMXth century Brussels park has several ponds, gardens and small forests ideal for strolling and enjoying the tranquility.

Not all tourists can visit the interior, because even if the entrance is free, the palace is open to the public only from 21 July to early September, from 10: 30-15: 45.

It is one of the great works of the time of Leopold II. All its buildings are characterized by a neoclassical style and colossal dimensions. The function of these works was to show the strength of the nation, and their construction was financed with all the money that Belgium got from its colony in Africa. The budget was exorbitant for the time.

La most impressive feature of this classic Greco-Roman style building is undoubtedly its size. It consists of 26.000 meters of surface, for a total of 246 rooms and 8 courtyards. In the main room the dome exceeds 100 meters in height. The dimensions of the palace exceed those of the basilica of San Pedro. When it was finished, it was the largest building ever built.

At the end of the Second World War, the Nazis set fire to the building, thus destroying the dome, which was replaced by another, without respecting its original appearance.

This palace commemorates the 50 years of Belgium as a nation, and inside it you can visit the Military History Museum, the Cinquantenaire Museum and the Automobile Museum, called Autoworld.

It is located in the urban park of the same name, and the most striking is the triumphal arch guarded by a bronze quadriga, in the style of the Brandenburg Gate in Berlin.

It is an association of national museums, scattered in various exhibition centers that hold more than 20.000 paintings, drawings and sculptures from all over the world and produced from the fifteenth century to today. I'm the Museum of Ancient Art, best known for its magnificent collection of Flemish art, that of Modern Art, exhibits works produced from the nineteenth century to today, the Constantin Meunier Museum and Antoine Wiertz Museum.

Another museum not to be missed is the Magritte Museum, dedicated to one of the most famous Belgian artists of all time.

Located in Bruparck a few meters from the Atomiun il Mini Europe park is another curious attraction to see in Brussels. The park offers about 350 models made in 1/25 scale through which 80 cities of the European Union are represented. These are faithful miniature models of the best European monuments.

The park covers 24.000 m2 and organizes exhibitions and interactive activities. Since 1989, when it was born, it has been an emblematic place for all tourists who come to Brussels. One of the main attractions for children and adults.

Our Lady of the Sablón

If you want to visit more churches, you can visit Notre Dame du Sablón, from the XNUMXth century, small and charming, which is one of the most beautiful Gothic-style temples in the country.

The outside is truly amazing, while inside, much simpler, its huge 15 m windows stand out. high and the carved wooden pulpit of the year 1697.

This is the unofficial name by which the area between the Cinquantenaire Park to the east, the Royal Park of Brussels to the west and the Leopoldo Park to the south is called. In this formerly residential area, most of the institutions of the European Union are located.

One of the most interesting visits in Brussels is the Parlamentarium. It is the visitor center of the European Parliament that allows you to discover in an original way how the institutions of the European Union work.

The visit offers 360 ° video projections, interactive multimedia screens and a replica of the parliament. It is available in 23 different languages ​​and admission is completely free. It is located at 60 Rue Wiertz.

What to see in Edinburgh: the best attractions ❯

Belgium, the most beautiful historic cities not to be missed

Bruges, what to see? Discovering the pearl of Belgium

5 European cities to visit in a weekend

Where to sleep in Brussels: the best neighborhoods to stay

add a comment of What to see in Brussels: attractions not to be missed