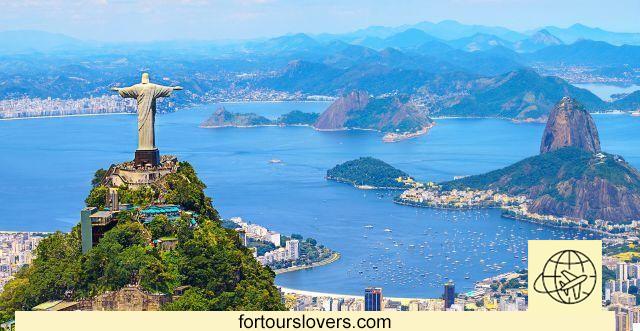 Il Brazil is the country with the largest and most varied territory in the South America. White beaches dotted with the fronds of tall shovels, cobbled streets flanked by colorful colonial houses, baroque churches, Carnival, the aromas of spices, capoeira. Brazil embodies all the essence of exoticism: this quick guide will help you plan your trip to the land of samba.

When to go: in Brazil it can rain all year round, but rains are less frequent between October and April. However, the climate is always pleasant in every season of the year.

Money, Credit Cards and ATMs: the official currency is the real (to the plural plural).

ATMs are present, but for safety, many close their doors after 21pm. There are two main circuits that accept international cards and they are Cirrus and Plus.

Safety: although the cities of Brazil have a problem with security, generally the crime is limited to certain areas such as the favelas where it is better not to venture if not with an organized tour.

La however, the attention threshold must always be high and at night especially when it is not recommended to take public transport, better to call a taxi. Never show anything of value like cameras, cell phones and precious stuff. I used the technique of not being conspicuous not to go around with the bag, but to carry the few things in a plastic bag from the supermarket.

Absolutely to bring photocopies of documents, leaving your passport safe at the hotel.

Do not forget to make atravel insurance, for example the one I used to World Nomads.

Public transport and transportation: there are three standards of bus: the Conventional which are old and ramshackle and if you take you you never know if and when you will arrive at your destination; the Executives are a little better and safer; the Leito are the night ones and are good buses. If you book long-distance buses, it is better to take the tickets at least the day before: better to buy them in the rodoviarias (intermediate stations) rather than from the agencies that top up the ticket.

I taxi they are convenient to take at night in the cities: since many do not use the meter to cheat on the price, try to haggle first.

Risks to health: in Brazil a big health risk is to catch one of the diseases brought by mosquitoes: both malaria and dengue fever are real risks and no joke. Whether you decide to do prophylaxis or not, make sure you always bring a mosquito spray (for example the Biokill that you find in many pharmacies).

La traveler's diarrhea it is an almost inevitable risk, however, be careful not to drink tap water and always buy bottled water. Beware of drinks with ice.

How much does it cost to travel to Brazil?

Unfortunately, compared to a few years ago, Brazil is becoming an increasingly expensive destination. The prices also and above all depend on the place: Ipanema is twice (even 3) more expensive than a country shipped in the countryside of the state of Bahia.


Hotels and hostels: you can still find beds in a hostel or albergue for 15 euros. In budget hotels you can find double rooms for 30-40 euros.

Restaurants: you can still eat with little, especially in places like pariadas and comida por kilo where you spend around 6 euros for a meal. Some churrascarias like Fuego de Chao are expensive but worth it, here you will eat the very famous barbecue that is, grilled meat.

The good indeed excellent news: the caipirinha it's cheap since it's made with the national liqueur, cachaca (which you will sometimes hear called pinga).

If you are traveling by bus, a protective steel backpack net that allows you to tie the backpack can be very convenient >> save it your amazon

What to do and what to see in Brazil

Rio de Janeiro: one of the most beautiful cities in the world. Don't just stop at Corcovado, but explore the city. however, you will not have enough time to discover all the wonderful things it offers.

Salvador da Bahia: do not miss the black capital of Brazil. Its historic center, the Pelourinho, with its colorful houses and Baroque churches is one of the symbols of colonial architecture.

BrasiliaAlthough not as famous as the “little sisters” Rio and Salvador da Bahia, Brasilia is definitely worth a visit: it is a unique piece of modernist architecture and a UNESCO heritage site.

Pantanal: one of the largest wetlands in the world and a paradise for nature lovers and bird watchers (think more than 650 species of birds live here). Pantanal is also the most pristine and least explored place in South America!

Iguazu Falls: halfway between Brazil and Argentina Iguazu Falls are taller and twice as large as Niagara Falls.

Isola di Boipeba and Morro de Sao Paulo: spend a few days on these wonderful islands. Boipeba is a jewel and (still) unknown to mass tourism.

Amazon: what trip to Brazil can be considered complete without spending a few days in the Amazon? Just think that even though it covers 8% of the world's territory, more than 50% of the biodiversity is found here.

Maranhenses Sheets: an endless expanse of white dunes interspersed with cobalt blue lakes, rivers and mangroves. The wind constantly changes the arrangement of the dunes, it is a marvel not to be missed.

Trekking on the Chapada Diamantina: paradise for hikers.

Capoeira: even if you will see on the street guys mimicking the capoeira, in reality to really realize what it is go to the little theater of Miguel Santana in Salvador de Bahia.

Attend a Candomblé ceremony: a religious tradition brought by the slaves of West Africa.

Soccer: Well, football here is more a religion than a sport: everywhere on the beaches you can see kids and children of all ages playing. If you are a football lover, go and see a game at the famous Maracana, the stadium in Rio de Janeiro.

Guide and Tips for a Trip to Mexico ❯