Brazilians often say they live on a continent rather than a country. And in part they are not mistaken, the surface of Brazil is larger than that of the United States, if Alaska is excluded. To get a better idea, the journey from Recife east to the western border with Peru is as long as the one from London in Moscow.

Brazil does not have mountains comparable to the nearby Andes, but it has all the landscape and cultural variety that is expected of such a vast country. Despite the huge expanse of the interior, about two-thirds of Brazil's population live near the coast and well over half live in cities.

The largest country in South America offers endless adventures and landscapes for all imaginable tastes. Although it is impossible to narrow down its attractions into a single list, we have tried to list the most beautiful places to see in Brazil below.

What to see in Brazil 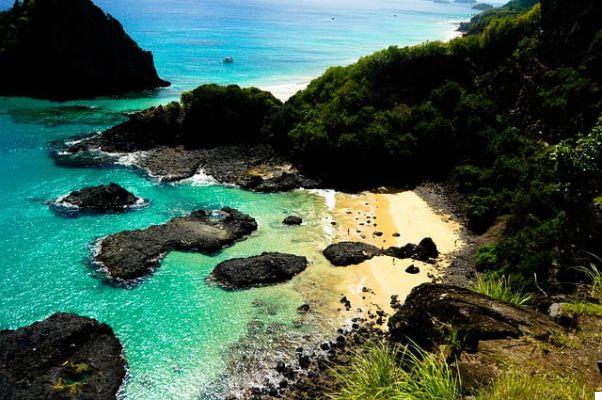 Fernando de Noronha is a volcanic archipelago of 21 islands in the Atlantic Ocean of which only the largest is inhabited, the rest has been declared a Marine National Park.

This earthly paradise is considered to be one of the best diving spots in Brazil and is perfect for those who wish to enjoy nature in its purest form, resting on its delightful beaches or observing its flora and fauna. In 2001 UNESCO declared Fernando de Noronha a natural heritage of humanity. 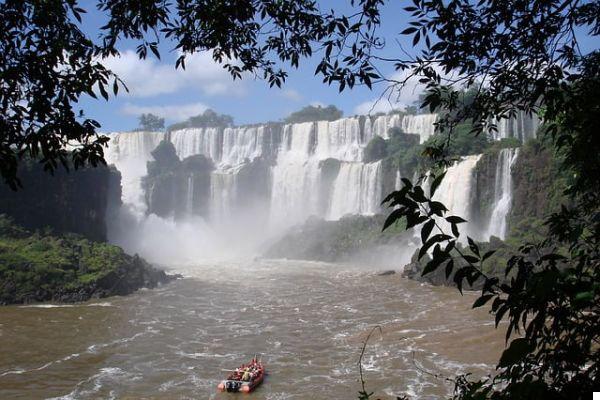 One of the 7 natural wonders of the world, Iguazu Falls, is located on the border between Argentina and Brazil. It is a spectacle of nature and certainly one of the must-see places in Brazil, but it's also worth hopping across the border to see the Argentine side of the falls. On the Argentine side you can see the falls more closely, while on the Brazilian side you can enjoy a complete view of them.

In addition to staying for hours watching the majestic fall of its waters, you can also follow the path towards the Devil's throat, where the mist produced by the breath of water envelops you completely. Around the falls there is an impressive subtropical jungle.

How to reach us: To see the falls on the Brazilian side, the closest city to stay is Foz do Iguaçu. The city is very well connected with any part of Brazil and can be reached by plane, ship, train, bus or car.

On the north shore of Brazil, in the state of Maranhão, is the Lençóis Maranhenses National Park: an area of ​​about 1500 km2 of white dunes and blue lagoons, undoubtedly one of the most incredible places in Brazil.

Despite being a desert, its rains are abundant (about 300 times more than in the Sahara). The sinuous lagoons protected by white sand dunes make Lençois Mahrenenses an almost dreamlike destination. The best time to visit is between June and September, because it is between January and May that the lagoons are filled with water thanks to the rains.

How to get: in Barreirinhas, the nearest town, there is a wide range of hotels, inns and tourist agencies offering visits to Lençois Mahrenenses. 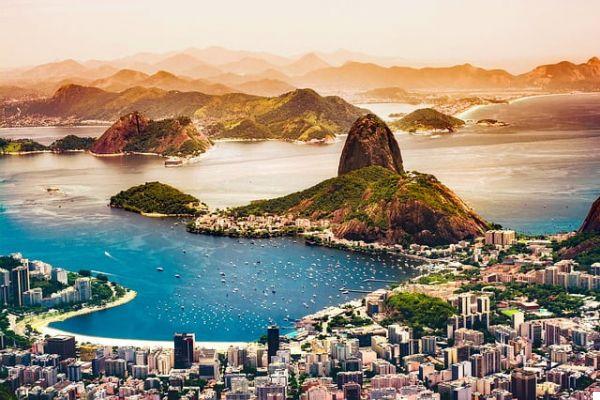 If you have to choose which of the most important cities in Brazil to visit, it will be Rio de Janeiro without the slightest doubt. It is a city that has it all. The views from Christ the Redeemer or the 396-meter-high Sugar Loaf peak are truly stunning.

Copacabana o Ipanema they are among the most beautiful beaches in Brazil, they have a very special atmosphere. Within the city you can visit the Tijuca Natural Park with monkeys and toucans, and the Santa Teresa neighborhood.

You don't have to miss the scale in Selaron, one of the most colorful places in the city, and Pedro Do Telegrafo, a stone that seems to be suspended on the edge of an abyss where many enjoy taking beautiful photos. 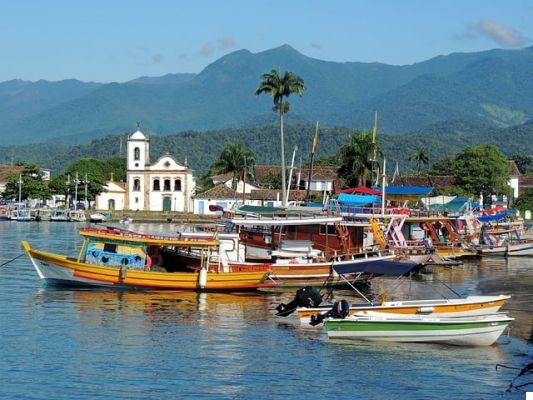 Paraty is a beautiful colonial city, well preserved and full of culture and charm, which has witnessed the times of the gold trade. Located on the Costa Verde, it has an enchanting historic center from the XNUMXth century. Near Paraty you will find more than fifty small islands and a natural backdrop of mountains, waterfalls and beaches of emerald waters.


Find a hotel in Paraty 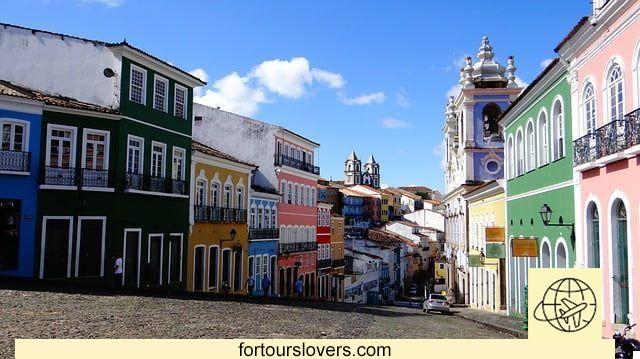 A true cradle of Brazilian culture, Salvador is one of the most beautiful cities to see in Brazil, thanks to its colorful colonial architecture and its mixed heritage. Here you will find both traces of Portuguese and African culture, both in gastronomy and in traditions. The atmosphere that prevails in Salvador is joyful, multi-ethnic and captivating.

Among the most beautiful places in the city is Pelourinho, the historic center listed as a UNESCO World Heritage Site. Don't miss the Barra lighthouse and its beaches, the Dinha square in the Rio Vermelho district and the beaches of Itapua.

There is something mystical about the Amazon rainforest, one of the last wild regions on our planet that covers 60% of Brazilian territory. The cities of Manaus e Bethlehem they are an excellent base from which to visit the heart of the Amazon. Best to go between May and June to avoid both the rainy season and extreme heat.

Jericoacoara ha one of the most beautiful beaches in the north of Brazil. It is a very quiet city in a wonderful natural environment with long beaches and large sand dunes. At sunset you can climb the main dunes of the city and enjoy the beautiful sunsets in the sea.

From Rio de Janeiro you take a plane to Fortaleza and from there you travel by bus that leaves a few kilometers from the city which is finally accessed only by off-road vehicles, since Jericoacoara is located between sand dunes.

Find a hotel in Jericoacoara

They proudly represent the Pernambuco region. Also called the "Venice of Brazil" Recife is famous for its folklore that comes alive during Carnival. Music, dances, costumes, the style of the region is unique and colorful with an architecture typical of the Portuguese and Dutch cultures.

At the gates of the city, you can discover Olinda, a lovely multicolored village, a UNESCO World Heritage Site. Finally, on the coast, you can enjoy fabulous beaches, worthy of postcards.

Find a hotel in Recife

Other sites to visit in Brazil

Il Chapada Diamantina National Park in the state of Bahia with its excursions among lush vegetation, rivers, waterfalls and underground lakes of incredible colors. Don't miss Cachoeira da Fumaça, the second highest waterfall in Brazil with over 400 meters.

The bay of Angra dos Reis, south of Rio, is made up of 365 islands, including Ilha Grande for swimming at some of the most beautiful beaches in Brazil.

Between São Paulo and Rio is the mountainous coast of the Costa Verde on which you travel between forests, beaches and beautiful islands.

North of Salvador de Bahia, the Coconut Coast it stretches for 200 km and is made up of coconut and eucalyptus palms.

How to get to Brazil

Except with some cruise ships, the only way to reach Brazil by plane. TAM, TAP and GOL are the airlines that provide most of the flights to and within the country. In principle, GOL is cheaper than TAM, but it is always better to compare their rates.

How to move in Brazil

I bus in Brazil they are clean, comfortable, safe and punctual. The bus network is really well organized and is one of the best choices for transport, also because they are particularly convenient. However, for long distances their price hardly competes with that of the plane.

On medium and long distances, you can usually choose between three types of buses: convencional (without air conditioning or toilet), executive (with air conditioning, toilets, reclining seats and water coffee dispensers) and Leito (seats in an almost horizontal position , with pillows and blankets), but about twice as expensive as the convencional.

In many areas theauto remains the most pleasant and comfortable means of transport. In theory, you don't travel fast in Brazil, the limit is 80 km / h, and many trucks are not easy to pass on narrow roads.

Il train it is practically a non-existent means of transport except to serve the outskirts of Rio.

When to visit Brazil

Brazil is so vast that it is almost impossible to define the ideal time to visit the country. There is not just one, but different climates, depending on the region you go to. The country is located in the southern hemisphere and the seasons are reversed from ours.

I better times according to the areas are:

The Brazilian currency is Real, these days the exchange rate is 3,9 Reales for every Euro changed. You can also make many purchases with a credit card and withdraw from ATMs or bank branches. Visa card is the most common, followed by MasterCard and Diners Club.

Electricity can vary, sometimes it is 110V and sometimes 220V, it depends on the places. Electrical outlets have two round pins, as in continental Europe.

Spaniards who go to Brazil for tourism or business do not need a visa but a passport with 6 months of validity is required. The maximum stay is 90 days, extendable for another 90 days. However, it is necessary to have a return ticket, and in some cases proof of having sufficient economic resources is required.

What to see in China: attractions not to be missed ❯

add a comment of What to see in Brazil: the best places to visit during your vacation