I chose the Transylvania for a trip to Romania for a few days: thanks to a long weekend on 2 June and a torn plane ticket, before I even knew it, I was already on the trail of Count Dracula. 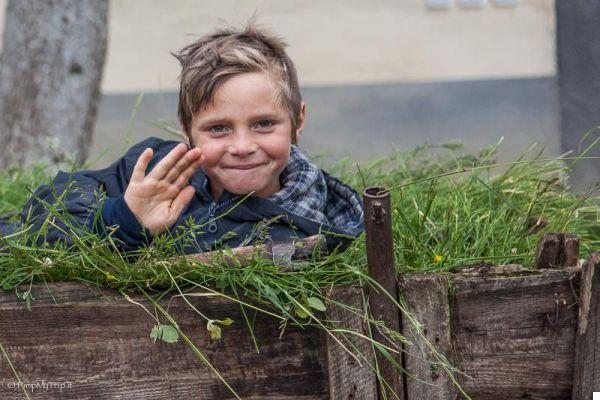 How can you not feel welcome with a smile like that? Welcome to Transylvania!

If you too have a few days and are planning to travel to Transylvania, in this post you can find my itinerary on the road among bright green meadows, imposing castles, colorful houses and fortified churches, more like bulwarks of defense than religious places.

Why Transylvania: some useful information 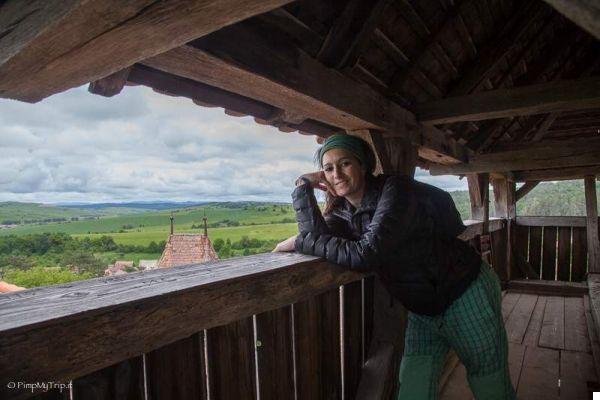 Pastel-colored landscapes, as if they have just come out of a painter's palette ...

In addition to the cheap plane ticket and the desire to meet the most famous vampire in the world, there are many reasons for choosing Transylvania.

Meanwhile, the Transylvania it is located in the most central part of the Romania, protected by Carpathian Mountains and surrounded by immense forests: it is no coincidence that the name means "land beyond the forest".

THEairport best to get there is definitely to Cluj Napoca, but given the prices of flights to Bucharest, it is worth landing directly in the capital and starting from there to Sibiu o Brasov. 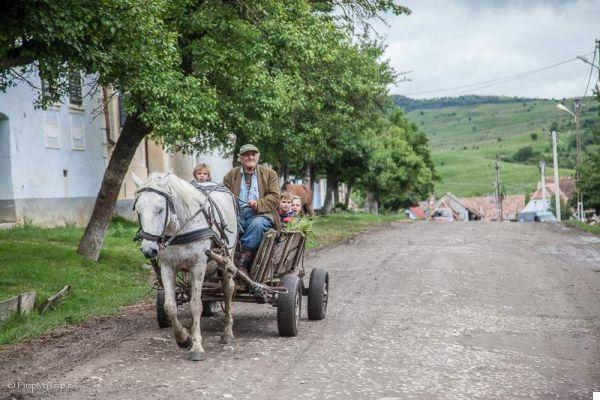 Rural Romania in the small town of Viscri


I chose the on the road by car even though I love it travel by bus and on public transport because I didn't have many days available and the car rental through the internet was very economically advantageous: 75 euros for 4 days (less than 20 euros per day) to which we added 10 euros per day to have a wifi router and therefore always be connected to the internet: a great advantage if you want to use a navigator and avoid wasting time wandering among the countries in search of the right path (even if getting lost in the wonderful mountain scenery of Transylvania certainly reserves some great beauty surprises).

RENT A CAR IN TRANSYLVANIA

Rent a car in Transylvania it is the best way to explore the country and one of the cheapest.

The roads are good and the fuel is cheap. Having your own car gives you the flexibility to travel at your own pace and see places that are not possible on group travel or public transport.

Check out RentalCars.com at this link (the one we used) to compare rental car prices and find the best deal.

Certainly who likes to eat Transylvania, and Romania in general, is an unmissable destination. I am a vegetarian and I honestly made a little effort, but Massi, who is not a vegetarian, ordered those delicacies that made me water too. Except then getting up from the table with a full belly and rolling our eyes when the bill was presented to us: Transylvania is also cheap, for a sumptuous dinner we have never spent more than 9-10 euros each. Exaggerating. 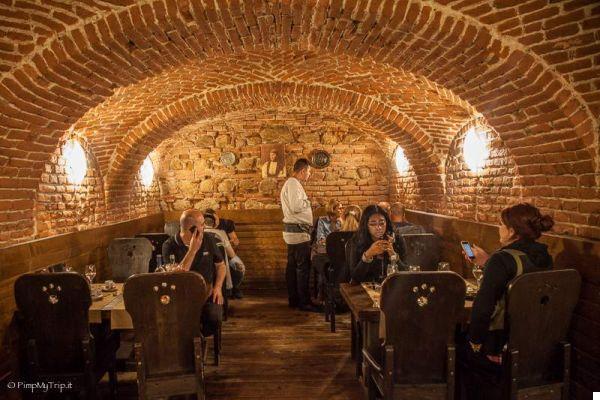 Do you like to eat? Don't miss a dinner at Sergiana restaurant in Brasov!

Also for what concerns the hotels you are spoiled for choice and with very little you can afford excellent accommodations that have nothing to do with the hovels that I usually allow myself. In this post for each stage you will find the hotel where I stayed with all the pros and (few) cons ...

In Romania it is the lei the local currency. Even if euros are accepted practically everywhere (but businesses paying in euros tend to round up in their favor) it is better to withdraw lei at ATMs: in Transylvania, in the classic itinerary that we have traveled, you will find everywhere counters that accept Mastercard, Visa and Maestro. 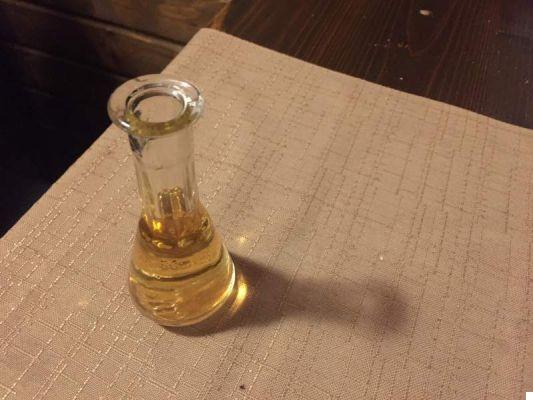 Il Dolomite stretch between Bucharest and Sibiu we decided to do it on the first day, so as not to find ourselves at the last one having to travel the 300 km that separate the two cities. In the end it was a good choice that I can recommend. Arriving in the late morning atOtopeni airport di Bucharest in fact, there is plenty of time to collect the car and to arrive in Sibiu before dinner, regardless of the traffic to leave the capital and for the work in progress that often slows down the schedule. 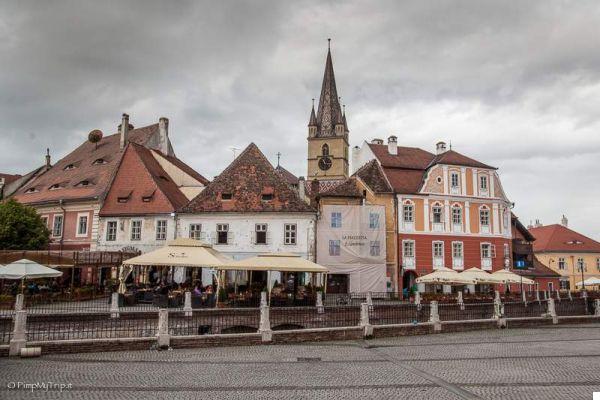 A small glimpse of the picturesque Sibiu, a treasure in the middle of the Carpathians.

La medieval Sibiu it is unexpected and fascinating: a small treasure right in the middle of the Carpathians. When you arrive at the central square, full of people and clubs of all kinds, with its houses with inlaid shutters and colored facades, you are immediately catapulted into the atmosphere of the real Transylvania.
The city is small and one morning is enough to see the main places of interest: the Breckenthal Museum (older than the Louvre in Paris), the Passage des Scalle, the Piazza Grande, the Small Square and the Huet Square.

We slept in thehotel Am Ring which faces directly on Big market. For the price the room was nice and spacious with a small window directly onto the square. Only two cons for this hotel: the two floors of stairs without a lift and the mattress which was not exactly the most comfortable. It is useless to take breakfast included: in Sibiu just go down to the square and wander the adjacent streets to find all kinds of pastry shops and cafes. 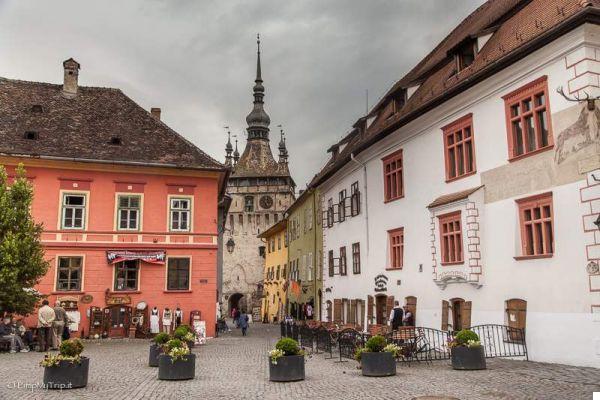 The magnificent Clock Tower in the Citadel of Sighisoara… Do you see the yellow house? that's where Count Dracula is said to have been born!

It must have been the drizzly, cold and misty weather that added to the atmosphere of the fortified citadel, but I Sighisoara it made me crazy.

The medieval citadel, surrounded by towers and walls among which the Clock tower, the torture chamber and the house where Count Vlad The Impaler is said to have been born, the figure who is traced back to Count Dracula, has a very particular "vampiric" charm: I felt like I was catapulted directly into a Dracula movie!

In the house where Vlad is said to have been born, a nice restaurant has been set up, while the "Count's" room is located on the upper floor which can be accessed for only 5 lei (about a little more than a euro): despite the theatrical setting a a little kitschy and the creepy music for that price is worth a look. 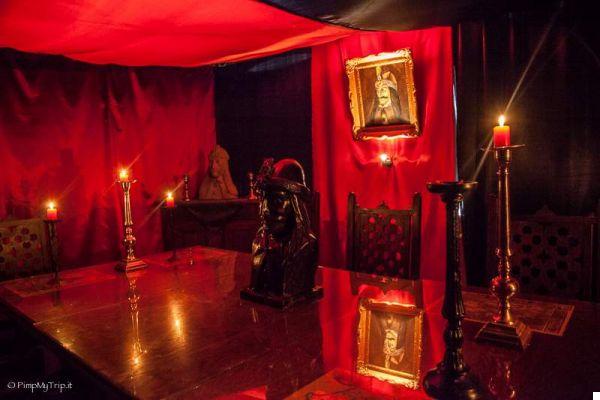 Vampiric atmosphere and disturbing music for the house where Count Dracula was born!

As a hotel we stayed atHotel Villa Franca which is in a great location directly below the citadel, with beautiful four poster bedrooms and a warm atmosphere. Super recommended, but if they offer you their restaurant in the campsite on the other side of the city, well it's a bit meh, in the sense that the view of Sighisoara is decent but the restaurant is not the best even if you spend little. A little aseptic and not very characteristic! 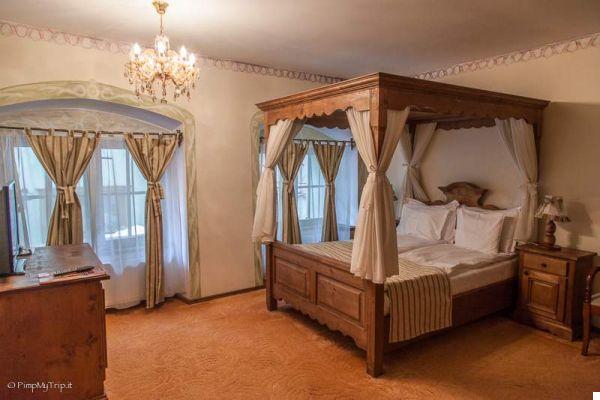 Between Sighisoara and Brasov

The road between Sighisoara and Brasov it is really very beautiful and it is here that I appreciated more than in the rest of the trip having a rental car and the freedom to move according to my instinct and my curiosity: so at a bend I turned and entered an infamous road , full of pits and holes that led me for miles in the middle of fields and nowhere, making me think several times to turn around and go back. 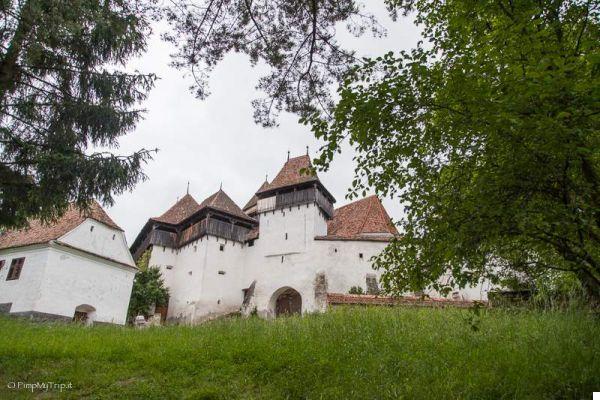 The fortified church in the village of visceri, not surprisingly a UNESCO World Heritage Site

Luckily I didn't because 8 km after the turning I came across a small Saxon village, Viscri, which I recommend everyone to visit especially for the fortified church which is truly a spectacle and not surprisingly is a UNESCO World Heritage Site.

Brasov, the "city of the crown" is not liked by many. Maybe because on this trip I was in the right mood, but I liked her too, with the fountain square, Council Square, the great and spectacular Black Church and the view of the city from the view point at the top of the cableway.
Brasov, like the rest of the cities I visited in Transylvania, is clean, lively and packed with people and tourists who flock to the main square and adjacent streets. 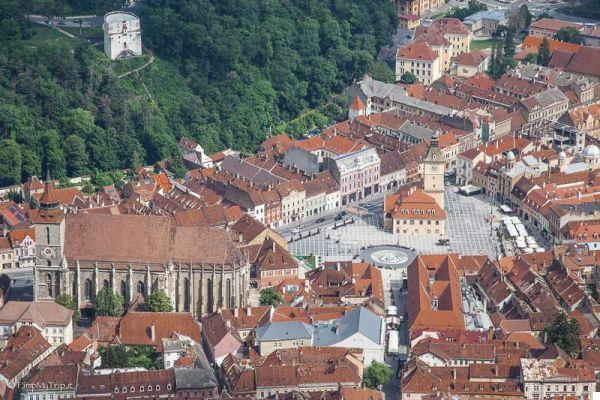 Panorama over Brasov, from the view point at the top of the cableway

As soon as you arrive you cannot fail to notice the Brasov writing in large letters on the top of the hill, not even we were in Hollywood, but in the end, during the night (yes I'm crazy, in the rain and in the middle of the night I went out to photograph ... in my pajamas) with the mist spiraling around the mountain, it gave me a gloomy film-like air that made me feel like I was in “Transylvania”.

We stayed in theCasa Wagner hotel, directly on the Town Hall square: nice hotel and even if the delightful and well-kept room was a small attic, I felt warm as in a nest. The breakfast at 11 euros each is certainly good, but the price is a bit exaggerated. 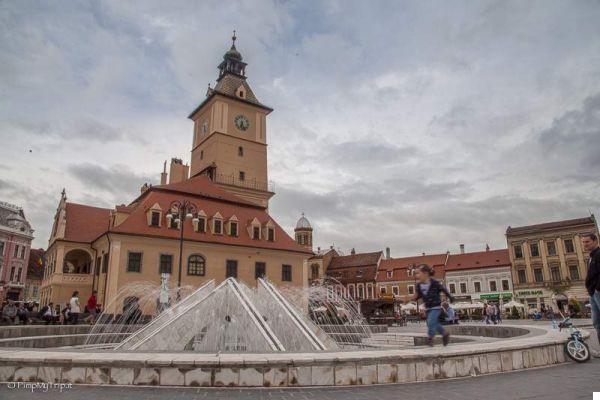 The central square of Brasov

Recommend to eat: we enjoyed the Ristorante Sergiana a few steps from the square: a huge underground cellar used as a restaurant, with a typical atmosphere, good food (especially meat) and excellent Romanian draft beer.

Brasov is the ideal destination for visiting the Bran Castle, known as the Dracula castle, which is about 30 km away, which can be covered in less than an hour. 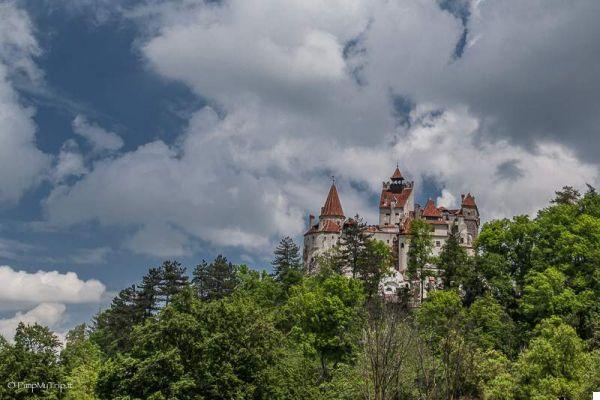 Bran Castle, known by all as Dracula's Castle ... but was this really his home?

On the way back to Bucharest, starting from Dracula's Castle, it is a must to stop for a couple of hours at Sinaia for the visit to the magnificent Peles castle, once the summer residence of the royal family, then became a residence for Ceaușescu who, despite communism, was treated well (but apparently he didn't like it very much), and now open fortunately and finally to the public.

The return between Peles Castle and Bucharest is fast, traffic permitting, and the 120km journey takes about a couple of hours. 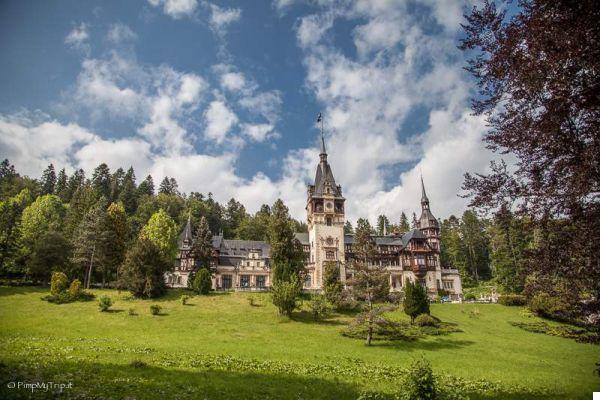 Peles Castle, the summer residence of the royal family and later the private residence of Nicolae Ceausescu and his wife Elena

La Transylvania it is truly wonderful and is the ideal destination for an On the Road trip. Too bad I only had 5 days to discover this Romania that despite being often mistreated, it is instead a country that leaves you bewitched and when you greet it you feel a great sense of nostalgia inside.

Have you been to Transylvania? Did you like it?

Trekking to the Cocora Valley: Everything You Need to Know ❯

add a comment of Transylvania On The Road, short route between Bucharest and Brasov