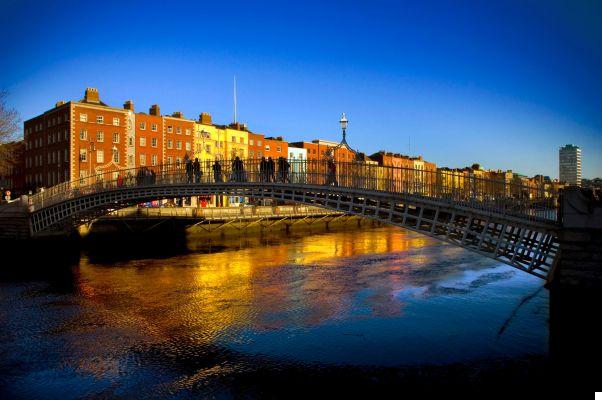 Too bad because thanks to cheap flights, food and lovely Irish-style pubs this small capital has all it takes to become one of the best destinations in Europe to spend a weekend in.

So when Massi asked me what I wanted for my birthday and thanks to a flight found at a bargain price, I got a weekend gift and in hindsight I can only recommend this lovely destination.

Ireland is an island whose climate it is mostly influenced by the Atlantic Ocean.
As a result, the country does not experience the extreme temperatures of other countries that are in similar latitudes.

Ireland sees its summer in the months between June to September and winters from November to March. The Dublin climate it is influenced by the presence of the sea with somewhat mild winters, cool summers and a relatively narrow temperature range. Precipitation occurs throughout the year.

As is true in much of the world, most people will recommend visiting Dublin during the summer, when temperatures are at their highest and the streets fill with people for the various festivities.

However, summer in Dublin is the most expensive time of the year. THE hotel prices and the plane ticket they are inflated and it will be necessary to book the rooms in advance, as the availability is not very large.

October is generally the wettest month and February is the driest. Fortunately for Dublin, being a relatively small capital and easily visited on foot, dress appropriately is all you need to comfortably enjoy the city in any season.

If you visit Dublin during the winter, fear not, there is no shortage of pubs full of friendly faces to warm your bones!

Getting to Dublin is very easy.

THEDublin airport it is located about 10 km (6,2 miles) north of the city center and there are various transport options.

There are four main ways to get to and from the airport:

How much does it cost to visit Dublin

Dublin has a reputation for being an expensive city - and it is, but if you are careful you can save a little.

Food, drinks and hotels are the things that can add a lot to the budget. Fortunately, the attractions aren't too expensive and the hostels are reasonable.

My advice is to assume a daily expense of € 60 per day - you can easily spend more and you could spend less, but that's quite a price.

A bed in a dormitory costs around 7/10 euros per night. The prices instead of the private rooms are around 70-80 euros for a double room (the single costs slightly less but not much), the same price as those of a budget hotel.

The options are plentiful, above all in the Temple Bar area or in the streets around Connolly Street, the main street of the city, you are spoiled for choice.

I honestly believed Dublin was offering even cheaper accommodations, only to discover that the prices for a double room in a budget hotel are always around 80 euros with a private bathroom.

Mi I feel I can recommend you the hotel I went to, the Beresford Hotel it's a great choice for someone looking for something fairly cheap and very clean. The hotel also has a pub and a restaurant, but above all it is in a great location and it is very easy to reach it from the airport by bus.

The 747 stops a few hundred meters from the hotel.

Well, I don't eat meat, but a burger in a pub, with fries or salad and a medium beer is around 13-15 euros.


A dish at the restaurant with a pint of beer will cost you more than 20 euros.

If you want to save money, as always, the best option is to shop in a grocery store and cook your own food.

Dublin is a compact city in which it is easy to get around on foot without having to use public transport. Renting a bike is a great option, especially if you want to see the outskirts of the city, but the city center is heavily trafficked.

Driving in the city is not recommended due to congestion, bus lanes, an extensive one-way system and a lack of parking. If you plan to travel from Dublin on the road, rent a car at the airport, as the city has a limited number of parking spaces.

If you want to save money, don't call a taxi even if they are extremely easy to find. It's worth spending a few euros more instead and grabbing one if you've been drinking too much.

Il Large (tram) is convenient for getting around the city. Fares are based on the zones: the rides in the central zone cost € 1,50 and can be paid with the purchase of the ticket or with the Leap Card.

What to see and do in Dublin

One of the must-see things in Dublin is there Guinness factory, the “divine”, one of the most beautiful breweries in Europe. Walk inside the factory's 7 floors, learning how Guinness is made, learning about its history and sampling a pint in the wonderful rooftop bar on the 7th floor.

In fact, each entrance ticket includes a free pint at the end of the tour at the Gravity Bar. There is nothing better than a nice pint of beer at ten in the morning with a fantastic view over the dense.

Take a ride on a Hop-On Hop-Off bus

If you are short on time, it might be a good idea to take this tourist bus which stops at all the major points of interest in the city.

The ticket is valid for two days so you have plenty of time to get on and off as you wish.

Il Trinity College, Ireland's oldest and most prestigious university is another must-see. Located in the city center, it houses a campus, an art gallery and the world-famous Long Hall, a bookshop containing over 200.000 of Trinity's oldest books, and also the place where you will find Ireland's greatest cultural treasure, the Book of Kells.

Completed in 800 AD, the Book of Kells is the world's most famous medieval manuscript, something you don't want to miss as you wander around Dublin.

Have a beer in Temple Bar

Although very touristy and crowded, if you want to spend an evening of Dublin's nightlife this is where you have to come.

Many pubs in Dublin close at 23pm or midnight. However, there are places that are licensed to keep open late. Ask your hotel.

Dublin has given Christmases to great personalities of the caliber of Oscar Wilde (one of my favorites), George Bernard Shaw, and WB Yeats just to name a few. The literary pub crawl is a guided tour through literature and includes a fun final literary quiz.

If Guinness is famous in Ireland, the whiskey it is no exception and in addition to the brewery if you want to take a tour of Irish flavors this is also where you must come. The Jameson is no longer produced in Dublin, but here you learn the distillation process and at the end some interesting tastings are included.

In the dense center is the Dublin Castle even if to see a castle it would not seem so. Today it is used for government business.

One of my favorite tours, which tells the story of Dublinia, the charming Viking and medieval city! the tour includes medieval streets, ancient Viking boats and the chance to relive bygone times through music and lights.

Many tours also include a visit to Christchurch Cathedral.

Although I don't like zoos, I don't like them and I think animals shouldn't be there, I have to mention it for the record, especially as it is located inside the beautiful park, the Phoenix

The cathedral is named after the Icelandic patron saint and is truly impressive.

Dated to 1191 and Marsh's Library is Ireland's oldest.

Dublin agencies offer day trips or in twos to all major Irish destinations.

From here in one day you can visit the Cliffs of Moher (50 euros including a visit to pretty Galway), the Giant's Causeway, Connemara, the Dark Edges and even the Aran Islands (two days). In addition, a virtually unlimited amount of walking tours, night tours, ghost tours or pub crawling are offered.

A few quick tips to save

Visit the National History Museum: this free museum, of the history of Ireland, from the Vikings, to the IRA and independence.

Take the bike: in the center of Dublin you can rent a bike for the cost of 3 euros per day. Dublin is flat and all attractions are easily accessible by bike. So you will save the money of the buses.

Il Dublin Pass includes the free transport from the airport (one way) and gives a discount to 30 of the most popular attractions in the city, including the Jameson distillery Guinness Storehouse and Dublin Zoo.

Bus from the airport: from the airport to the city center there are the Airlink buses, the 747 or the 757. The cost of the single journey is 7 euros, but you can save if you buy the Rambler ticket (you can buy it directly at the airport near the Tourist Information Center) at terminal 1 which for 6 euros and 90 allows you to travel for free on city buses for the whole day in which it is valid.

Free toursThere is a wide choice of free walking tours in Dublin. Famous are those organized by Dublin City Council.

Combined tickets: If you want to visit many tourist places there is the possibility to buy combined tickets that allow you to save something on the single entrances.

Dublin is home to over 600 pubs! Clearly, Dubliners like to have fun, so much so that they have a term called "the craic". You too can enjoy unforgettable evenings in the famous Irish pubs.

Alcohol is Dublin's favorite drug; That said, pubs aren't just a place to have a drink. Pubs are a home away from home: places to eat, drink, dance, tell stories, sing, chat and enjoy the company of others.

The district of Temple Bar it's a hot spot for tourists, and especially The Temple Bar, the name of a bar in Temple Bar. (Just so as not to get confused, right?)

The drinking age in Ireland is 18. Most pubs close around midnight. Licensed bars can stay open until 3:30 am.

Il No Name Bar it is my favorite place instead. I love how I felt at home sitting next to complete strangers. Bartenders, waiters and locals treated me like family. And you drink really well.

Visit the Great Wall of China from Beijing (avoiding the queues) ❯

When to go to Ireland, Best Month, Weather, Climate, Time

Where to Stay in Dublin

Dublin What to See

Cliffs of Moher: how to visit Ireland's most famous cliffs

Ireland on the road: 8 days itinerary on the Emerald Isle

add a comment of Visit Dublin, Quick Guide to the City