Cliffs of Ruin! Visit the Cliffs of Moher in Ireland

When it comes to cliffs of Ireland you immediately think of the legendaries Cliffs Of Moher (Cliffs of Ruin) and it could not be otherwise.

The cliffs emerge from the sea with a vertical drop of more than 200 meters and are much more impressive than I would have believed before seeing them with my own eyes. 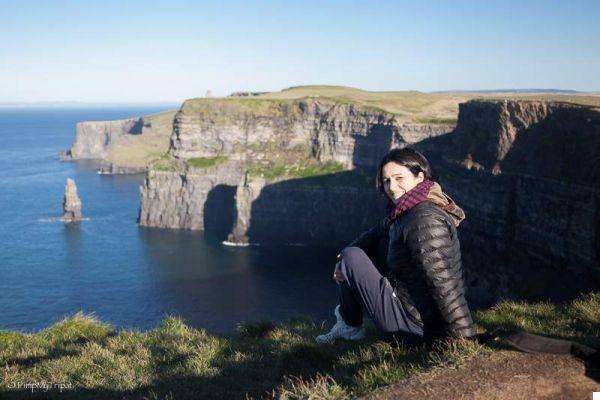 I had heard that they were wonderful and after having been there I can say that they really are.

Thanks to a sunny day at the end of November (which is very rare, it happens 3 or 4 times a year) I took a guided tour from Dublin and I went to visit the Cliffs Of Moher although everyone had advised me against it.

Because two days in Dublin are few and it would be better to spend them in the city. But I couldn't resist, I absolutely had to see them and so I decided to go anyway. 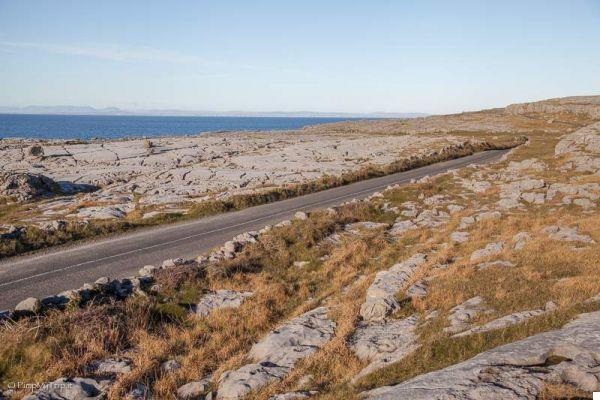 Most travelers who visit the Cliffs of Moher do so on a road trip by car driving along the Wild Atlantic Way, but if you only have a few days, the guided bus tour is a really good alternative: the cost is not excessive, you stop long enough to fully enjoy the cliffs and you travel on comfortable buses.

The Cliffs of Moher 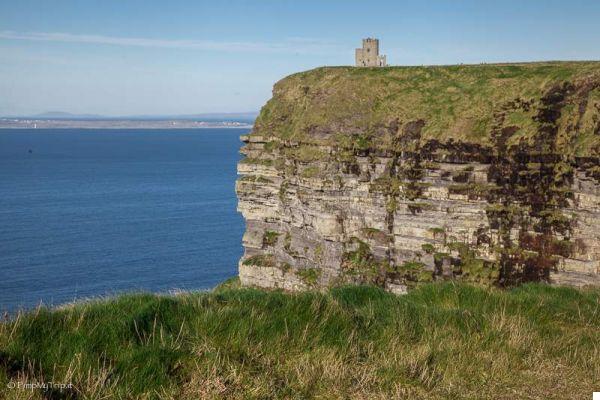 The cliffs and the Aran Islands in the background

About 90 km south of the picturesque Galway, the Cliffs of Moher are located on the west coast of Ireland, in County Clare and they are by far the most visited place in Ireland: every year they capture the hearts of a million visitors.


The cliffs at their highest point emerge from the sea with a vertical drop of 214 meters and extend over the Atlantic for about 8 km. From here you can see in the distance the Aran Islands, Galway Bay, the 12 Bens and the Maum Turk Mountains in Connemara.

The Cliffs of Moher are named after the Mothar fort which was destroyed during the Napoleonic wars to build in its place a lookout tower called Hag's Head.

The Cliffs were formed about 320 million years ago, in a warmer period than today, during the Upper Carboniferous, when this area was located at the mouth of a river. The river carried sand and mud with it and deposited them here.

With the passing of the geological eras, sand and mud lithified, creating the different layers of rock that are seen today (sorry but my training as a geologist sometimes prevails).

The cliffs are now a Special Protected Area and are the "home" of more than 30,000 birds. Among them, during the season from March to July it is also possible to see the funny and nice Puffin that comes to nest on the Goat island.

Seals and dolphins are spotted very frequently and if you are lucky you might see a Humpback whale or a basking shark, the largest species of shark in the world after the whale shark.

A stretch of the route. Walking on the edge of the precipice has caused many accidents


“Be very careful because more than one person died falling down”, well our guide's warning was not given to us by chance. A new path, marked by barriers built with stone slabs, runs more internally than the original path which sometimes winds directly over the precipice.

Clearly you can climb over this barrier and many do it (myself included) but it can be very dangerous, both for the wind that blows very strongly, and because the edge of the precipice is unstable and landslides are almost the order of the day. 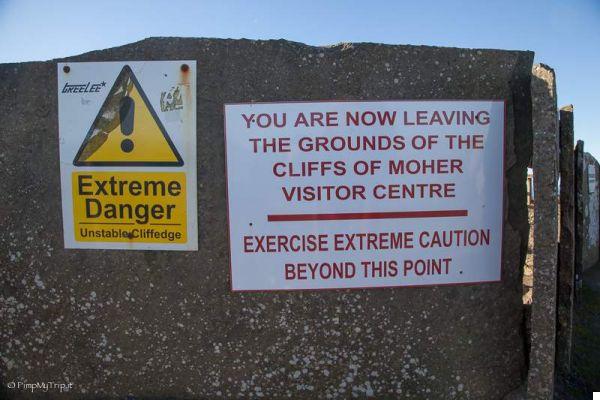 From the Visitor Center the route divides into two branches, one towards the south and one towards the Hag’s Head: it depends on how fast you walk, but it takes almost two hours to get there.

The other branch, on the other hand, the one to the north, reaches the O'Brien's Tower, which marks the highest point of the cliffs and on which you can go up by paying an extra ticket of 2 euros.

From the Visitor Center to O'Brien's tower it is a few minutes walk and from the top of the tower you have the most spectacular views of the cliffs. 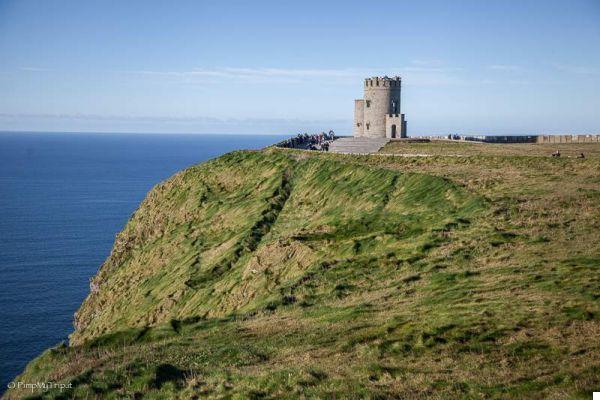 Opened in 2007, the Visitor Center is a completely eco-friendly construction built like a quarry under a hill so as not to spoil the landscape and with water and energy management aimed at minimizing the impact on the environment.


Cliffs of Moher, guide to the visit 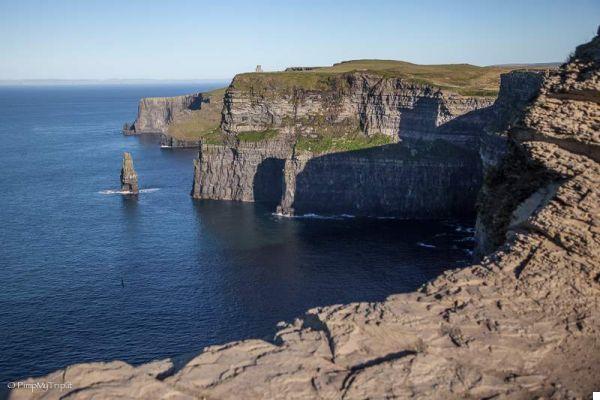 The Cliffs of Moher are located near two small towns, Liscannor, located 6 km south and Doolin which is 7 km to the north.

Although the villages are really small, they offer a varied choice of restaurants, bed & breakfasts and pubs in which to relax and have a beer after a day of exploring.

The summer months, especially July and August, can be very busy, but September offers a great time to visit the cliffs.

If you have time, you can visit the Cliffs of Moher along all 20km of the Coastal Walk, while if you don't want to walk, you can take part in aexcursion by boat which starts from Galway and offers the opportunity to visit caves among which the famous one stands out  Giant’s Cave about 100 meters high.

Due to the often very rough sea, boat trips are not always guaranteed.

Useful tips for the visit

Those arriving with their own car will have to pay 6 euros to park at the Cliffs of Moher. However, this includes the ticket to the visitor center.

If you don't have a car and want to access the visitor center, the cost is 6 euros for adults and 4 euros for students. Children are free.

If you plan to visit O'Brien's Tower, there is an additional cost.

There are Toilet, for an restaurant it's a cash machine located in the visitor center.

Visit the Cliffs of Moher Experience Center - you don't have to spend a lot of time there, but it's beautiful. Especially the video (only 10 minutes) which offers a bird's eye perspective of the cliffs.

Le cliffs face west, so if your main goal is to photograph them, the afternoons and evenings offer the best times for light.

È very windy and it can get cold even on sunny days. However, bring a jacket. As we all know, the weather in Ireland he's a bit schizophrenic and can also change quite quickly, so a waterproof jacket would be ideal.

Good hiking shoes they are indispensable; the ground is uneven and can be slippery when wet as well as muddy. In short, leave your heels at home.

La safety is paramount: there have been fatal accidents. For this reason, barriers and a stone wall were erected not to be climbed over. Cliff edges are not safe, so be careful and don't stand on the edge.

Getting to the Cliffs of Moher from Dublin 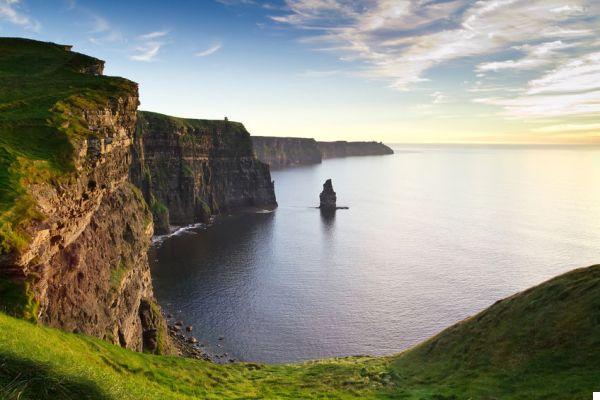 Sunset over the Cliffs of Moher

If you have not rented a car and want to visit the Cliffs of Moher in the day, choosing a guided tour is in my opinion the best choice.

I have found this tour on GetYourGuide which relies on the buses of the Wild Rover Tours and I'm really happy with the choice I made. We left early in the morning around 7 and after a few minutes stop for breakfast and go to the bathroom, we arrived on time on schedule to the cliffs around 11.

At about half past one we got back on the bus to travel the Wild Atlantic Way up to Galway where we stopped another two hours.

The reasons why I absolutely recommend this tour were: 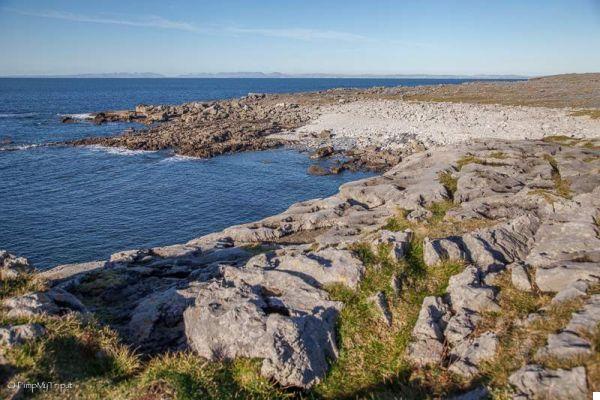 As an alternative to the tour, you can also reach the cliffs by public transport, bus and train, but it takes too long and I don't recommend it.

If you still want to do it:

By train it takes about 5 hours. All major Irish cities are connected by train, including Dublin, Galway, Cork and Belfast in Northern Ireland. To reach the Cliffs of Moher by train, take any train to Galway or Ennis, via Limerick, and then take a bus from either side. For more information, visit the website Web Irish Rail.

By bus it is much more comfortable and easier to get there. There are private companies that only offer the direct transfer from Dublin, like the Gray Line for example.

If you want to go with the public buses, there is a direct public bus from Galway Bus Station to the Cliffs of Moher along the Wild Atlantic Way on the route Bus Eireann 350. Note that Bus Eireann operates five times a day in the summer and three times a day during the rest of the year.

You can plan your route from Buseireann site.

You can rent a car at the airport of Dublin or to that of Shannon (the closest airport to the Cliffs of Moher), which is easily accessible from both Limerick and Galway and is just an hour's drive from the cliffs.

Upon arrival, you can park in the main car park opposite the visitor center.

There is a reason why Cliffs of Moher they are the most visited place in Ireland and if it has been chosen as the location for famous films: walking on the edge of the precipice above the Atlantic enjoying the views around it is pure magic.

Discover the Forbidden City of Beijing on a Summer Day ❯

Connemara, 5 places to fall in love with Ireland

A romantic honeymoon between Ireland and Scotland

add a comment of Cliffs of Ruin! Visit the Cliffs of Moher in Ireland