A romantic honeymoon between Ireland and Scotland

Author and references
A romantic honeymoon between Ireland and Scotland 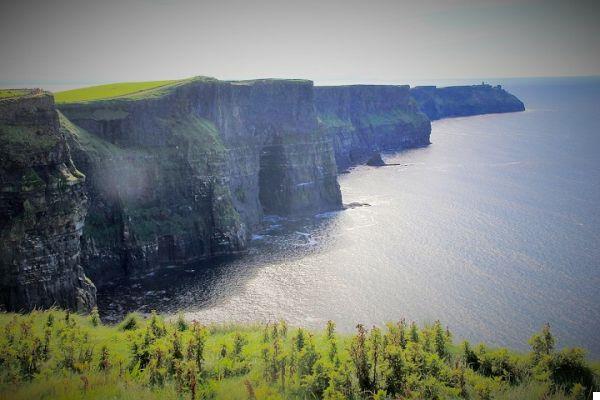 A honeymoon betweenIreland and Scotland will allow you to discover spectacular and romantic places among cliffs overlooking the sea, endless expanses of grassy moors covered with wild heather, medieval castles where you can dream of life in the fiefdoms or baronial residences of the following centuries. The journey is a continuous leap between past and present, where the present is immersed in the green of the plains and hills that cross the two countries in a similar union that unites them very much.

We suggest an itinerary that we have tried for you and of sure feasibility, lasting ten days. Our proposal includes:

The first day you will reach Ireland with landing in Dublin, where for two days you will get lost in the streets of the city on a human scale, where you can breathe the Irish atmosphere in every corner: in the signs of pubs and shops, in the facades of Georgian-style palaces, in Anglican churches, in tidy green parks that alternate with the buildings of the city. In Dublin you can't miss Trinity College with the legendary Old Library, Irish music at Temple Bar and the curious history of the Guinness Storehouse, as well as a taste of Guinness stout beer. 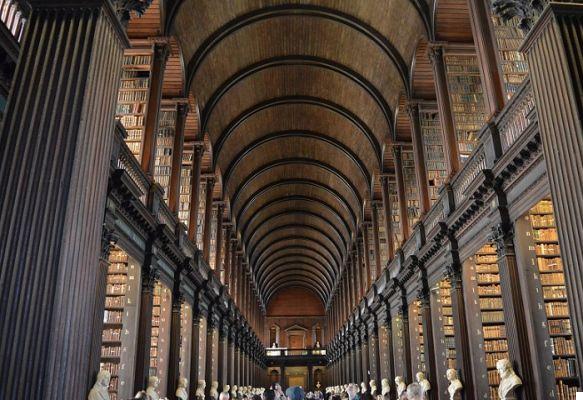 On the third day aboard your rental car you will head to Northern Ireland to meet the first cliffs: the Giant's Causeway, the Giant's Causeway, a UNESCO World Heritage Site. The site is wrapped in a mythical and legendary atmosphere and tells the story of the giant Finn McCool. With a walk along the northern coast of Northern Ireland, between the blue of the sea and the green of the rocky hills behind you, you will discover the clues of the existence of the giant, and along the paths marked by the audio guide you will reach a cliff from the bizarre conformation. The basalt released as a result of intense volcanic activity, which took place millions and millions of years ago, has created an expanse of rocky columns (more than 40.000) in the shape of a prism on which you will walk to reach the sea water. 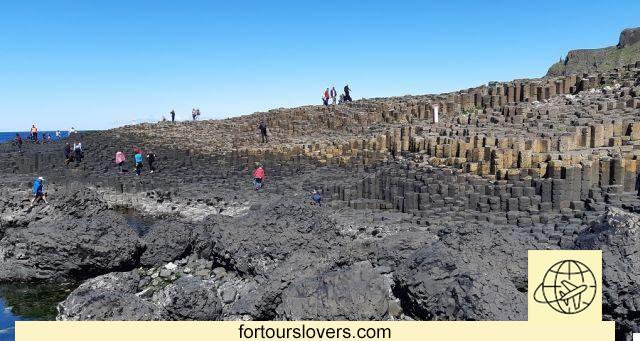 Leaving the site and the nature reserve you will head to Belfast for an overnight stop and to enjoy this great city, famous for its shipyards and for giving birth to the most famous ocean liner in the world, tragically sunk during its maiden voyage. : the Titanic.

The city of Belfast is beautiful for its red brick buildings, historic buildings alternating with modern buildings, for the many Murals (murals) around the city that speak of the stormy political past. You cannot miss the Crown Liquor Saloon where you can enjoy a beer or a whiskey among the wooden barrels, the richly inlaid Victorian style walls, the stained glass windows and the multitude of Irish people who stop here for a break after work.


The fourth day foresees as destination Galway, on the west coast, a small town with colorful houses and a port from where every morning the fishing boats leave, bringing the fish that you will taste in the many characteristic places of the city. Before reaching Galway, during your journey you will stop at the Monastery and the Castle of Clonmacnoise: the castle is a stone ruin resting on a green hill where cows graze, but the monastery can be visited (Pope John Paul II stopped there during his apostolic journey of 1979). Despite the ruins it was one of the most important religious centers in Europe: with its numerous Celtic stone crosses, scattered on the grassy site, it reserves a unique charm also for its location close to the River Shannon.

Spending the night in lively Galway, the next morning you will travel further south to Cork. On your way you will find Dunguaire Castle for a short stop, you will cross the Irish countryside drawn by verdant lands bordered by low stone walls, where sheep and cows graze. After a couple of hours by car, you will reach the Irish destination par excellence: the Cliffs of Moher. A masterpiece of nature consisting of rocky walls up to 214 m high and 8 km long literally overlooking the sea. You can look at the wall, with caution, and see at the bottom where the rock meets the sea. Not everyone can do it, it depends on your sense of dizziness.

Continue to Cork to leave your rental car and catch your flight to Scotland for Edinburgh.


With two nights in Edinburgh you will have the opportunity to enjoy this wonderful medieval city where a historic monument appears in the open at every single street corner. Between the New Town and the Old Town do not expect the ancient and the modern, but an alternation between the old medieval and the more modern Georgian-neoclassical style. You cannot miss Edinburgh Castle, a real dive into the past of English history that has become, together with the historic center of the city, a Unesco World Heritage Site, and a walk on the Royal Mile, up to the Scottish residence of Queen Elizabeth, Holyrood Palace . 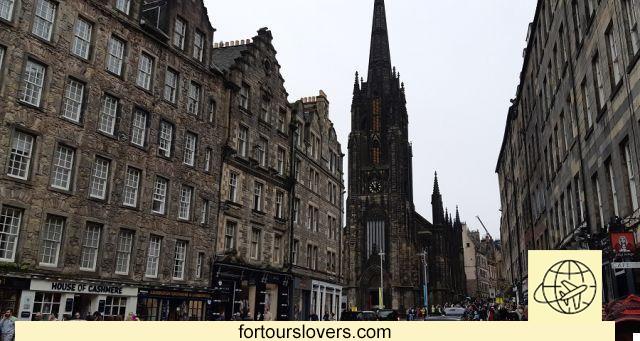 We leave Edinburgh, reluctantly, and head north: destination the Highlands and the Isle of Skye. The journey is long, at least 4 hours, but on the way we stop at the first historic Scottish residence of our trip, Scone Palace, one of the best models of a Georgian-Gothic building still in excellent condition. A harmonious silence surrounds the residence and a particularly well-kept park full of flowering plants, in every season, frames its beauty. The dream of many couples. Do not miss the gardens with the cute maze to try absolutely.

Continuing towards our final stage, we reach the Highlands, a borderland with the northern seas of Great Britain, a surreal place where nature is the absolute protagonist. Mountain ranges, verdant valleys and large lakes occupy this Scottish region rich in water that flows from every ravine. This leads to Eilean Donan, the town famous for the castle most photographed by tourists from all over the world: it is a place with a mysterious and legendary air, where history permeates every single stone with which its castle is built. 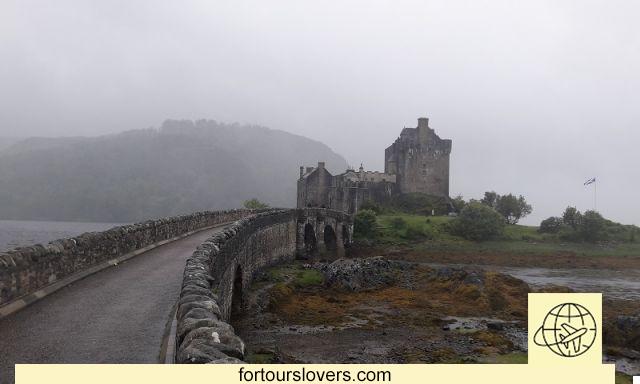 Hoping to find a sunny day - after all, it often rains in these parts - the next morning of the eighth day, we leave early to reach the Isle of Skye. The island is a world apart, it almost seems to be in Lofoten or in Iceland - perhaps without ever having seen them - but the feeling is that of a land detached from the rest of the continents and still uncontaminated. Here man has not succeeded in imposing himself and nature is disruptive, the only human footprint is that of the small white houses with gray roofs scattered here and there, with their pasture of sheep or nice long-haired kyloe cows. On the Isle of Skye you cannot miss the lighthouse and the cliff of Neist Point Lighthouse, the magical Valley of the Fairies, the small town with colorful houses of Portree where time seems to slow down, the white beach of Coral Beach (it seems to be in the Maldives , but given the cold you will never dream of taking a bath). 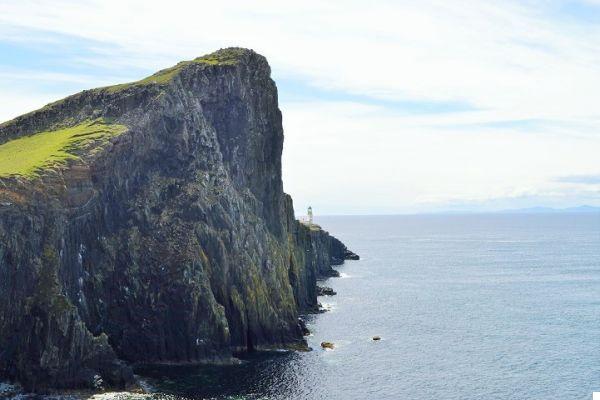 On the ninth day we go down south and go home. But one of the most important stops in Scotland is still missing: the mythical Loch Ness. The gaze always falls between the waters of the lake to spot some ripples, some shadows, even though the surroundings are fabulous. But nothing ever moves. A rich vegetation hides the ruins of Urquhart Castle on the shores of the lake, restored for a visit by tourists immersed in the ancient walls where the story of the Jacobite revolts is told. In the evening you will find accommodation in the small town of Pitlochry where you can stop for one night and take advantage of a tasting at a Scottish whiskey distillery. Before reaching Edinburgh, the journey ends with a visit to the majestic Stirling Castle, one of the largest and most important in Scotland, still in excellent condition. Situated on a hill, the castle has been the center of several Scottish kings' coronations.

This concludes the tenth day and your journey with the return home by flight from Edinburgh. Between emotion and a few hidden tears you will leave a piece of your heart in these northern English lands, which were able to welcome you during your honeymoon and make you fall in love with their places.

Our itinerary is just a glimpse into what your romantic honeymoon between Ireland and Scotland can be like. The trip can be extended in duration or varied in the itineraries and stages. We just have to wish you a dream honeymoon between nature, history and strong emotions.

But now let's see what is the ideal period for a honeymoon between Ireland and Scotland. The best months are those between May and July, when the rains are more contained than the rest of the year and the temperatures are mild. The longer days will also allow you to fully enjoy the many destinations to be reached. Consult the factsheets of the two countries (Ireland e Scotland) before leaving to decide what to pack.

A honeymoon in the Coral Sea ❯

Connemara, 5 places to fall in love with Ireland

What to see in Donegal: a day in the wildest of Ireland

add a comment of A romantic honeymoon between Ireland and Scotland