Discover the Forbidden City of Beijing on a Summer Day

Before my trip to China, everything I knew about Forbidden City in Beijing I only knew him thanks to the film by that undisputed genius of Zhang Yimou.

Panoramic view of the Forbidden City in Beijing

In fact, during the preparation of the trip, I had concentrated more on studying all the various scams that the Chinese organize against tourists in the great Tian'anmen Square than on the things to see, although I have always been passionate about history.

La Forbidden City (Gu Gong in Chinese) was the thing we visited first in Beijing and we arrived on a very hot and sultry day in August: a layer of smog and humidity covered the sun and the heat was almost unbearable.

Me and Massi ... can you see happiness?

August is not the best month to visit the capital of China. Despite this we were so enthralled by this place that we spent more than 4 hours visiting palace after palace, peering behind dusty windows and lingering over the impressive marble sculptures and colorful roof decorations.

Brief History of the Forbidden City

The Forbidden City was built during the Ming dynasty, in 1400 and housed the emperors and their families for 500 years: during this period, ordinary citizens were absolutely forbidden to enter, under penalty of a long and painful death.

The story goes that one million workers were used by the architect Yun Lo for the construction of the more than 800 pavilions that make up the complex.

Apart from the emperor, the only people who could live in the city were the empress, her concubines and her personal guards, castrated men and called eunuchs. The role of the eunuchs was to protect and guard the concubines: they were also allowed to enter the inner courtyards and spent a privileged life in wealth.

Even the male relatives of the emperor who were allowed to visit, could not stay in the inner circle of the City during the night.

Over 20.000 concubines lived in China during the last dynasty, the Quing one. Some of them, despite having spent their entire life closed within the walls of the city, have never met the emperor.

Even though they lived in wealth, their life was sad and lonely. Tussles to become one of the emperor's favorites were not uncommon and sometimes these quarrels resulted in real tragedies such as murder.

Only once a year were concubines allowed to look outside the walls to see their families and friends.

What to see in the Forbidden City

The Forbidden City is huge: 1000 meters long by over 700 wide and is the largest museum complex in all of China.

Surprisingly well preserved, the complex is separated from the rest of Beijing by a mammoth 10 meter high wall and a 52 meter wide moat.

There are two main areas that divide the complex: the outer courtyard, where meetings and ceremonies were held, and the inner courtyard, the real residence of the Emperor.


In August, the heat is stifling, but luckily just outside the Forbidden City there are vendors from which you can buy bottles of fresh water and ice lollies with unlikely tastes. 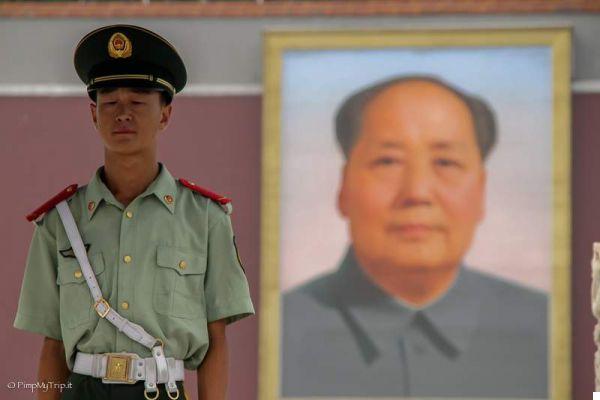 A guard stands in front of Mao's portrait in Tian'anmen Square

The entrances to the Forbidden City are 4 (one on each side of the walls) but the museum allows you to make only a one-way route.

To escape the crowds of tourists, Massi and I crossed Tian'anmen Square and the Meridian Gate quickly but just beyond the walls we froze with our noses up.

In fact, we found ourselves in front of a succession of halls and palaces that expand on both sides of the central axis: the bright yellow roofs of the majestic buildings seemed to levitate above the vermilion red walls.

We went through the Ponte del Torrente Dorato and the Gate of Supreme Harmony (Taihe men) and finally we have reached the Outer Court.

The Bridge over the river


When I read these names, a smile escaped me: in those days, in fact, there wasn't much of Harmony.

The Palace of Supreme Harmony (also called Hall of Central Harmony) is the heart of the Forbidden City: it was here that the emperors were crowned. Inside is the most important of the imperial thrones from where the emperor commanded and reigned over his great empire.

The other two palaces were the emperor's resting places and where he elected his officials.

The Outer Court also houses the Imperial Library, the archives and the depot of lanterns.

Outside the Palace of the Preservation of Harmony, there is a marble slab more than 16 meters long and weighing 250 tons engraved with drawings of clouds and dragons. It is an amazing work of art.

The curiosity is how this single block of marble was brought here from the extraction area which is about 70 km away. But man does his best when he wants: during the cold winter an ice road was created:

Water was poured in front of the slab and in a short time the ice was formed. In this way 20.000 men and 20.000 horses (so the story goes) dragged the slab up here. 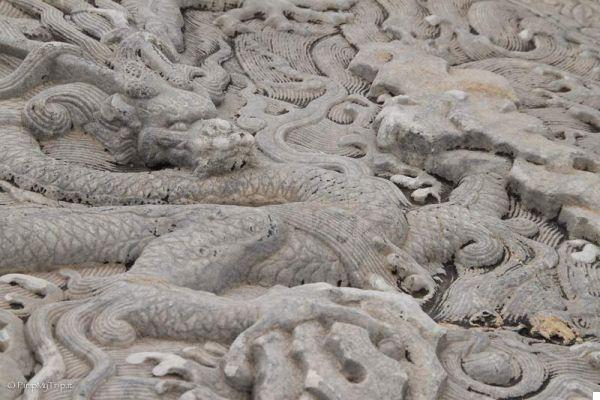 The internal court is made up of three main buildings, the Palace of the Great Union and Palace of Earthly Tranquility, il Palace of Heavenly Purity and from other palaces where the emperor used to conduct his daily affairs and where he lived with his family, eunuchs and servants.

Inside these palaces, exhibition halls have been set up and although the imperial collections are very interesting, we went through them a bit in a hurry.

One of the gates of the city walls

In the last part of our tour we reached the imperial gardens which were undoubtedly one of the parts of the Forbidden City that I liked the most.

The gardens are "inhabited" by rock sculptures, among which a rock "hill", called la Hill of Accumulated Elegance (Dui Xiu Shan), with a small temple on top.

The emperor and his concubines used to go up there every ninth day of the ninth lunar month. In ancient China, the sheer number of sculptures and the grandeur of rock gardens were synonymous with power and wealth.

I am sure that in different circumstances and times there Forbidden City in Beijing it could really have been a place of great serenity and beauty.

It was actually just a fantastic golden prison. it is true that no one could enter, but it is equally true that whoever entered never left: concubines, eunuchs and the emperor himself.

One of the pavilions

During the school holidays, between July and August, the Forbidden City opens at 8am.

Entrance is only allowed through the Porta Meridiana, the south door of the museum.

Take subway line 1, get off at Tiananmen East Station
(Exit A) or Tiananmen West Station (Exit B), find the Tiananmen Tower and then walk north to the Meridian Gate.

Take Metro Line 2, get off at Qianmen Station (Exit A),
walk north through Tiananmen Square, past the Tiananmen Tower and then find the northernmost meridian gate.

There's a daily limit of 80.000 tickets, and you think they are few, it is because you have not yet seen the number of Chinese tourists, especially during holidays.

Although it is possible to book online, it can only be done if you have an 11-digit Chinese number and a bank account in China, so if you are not Chinese it is practically impossible. However, you can buy tickets at the ticket office: go early in the morning so as not to lose them!

Al Meridian Gate it is possible to rent audio guides in English.
Al Gate of Supreme Armony there is an info point with tourist information.

The whole Forbidden City is fully accessible even for people with motor disabilities, thanks to a path for wheelchairs.

Night buses in China: a journey of hope from Guilin to Hong Kong (part two)