Located in the Guanxi province Li River (Lijiang) is called the "river of poems and paintings" and it is not difficult to see why: with its gray sandstone peaks rising to the sky, green hills and terraced rice fields, the landscape between Guilin and Yangshuo literally takes your breath away. 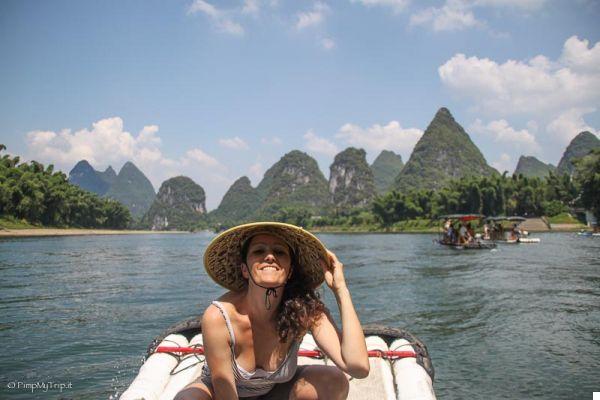 On the fake bamboo raft along the Li River… with the sun!

It is no coincidence that there is a saying in China: shan shui jia tian xia, which means "the mountains and rivers in Guilin are the best under the sky".

What better way to enjoy it than to go slowly down the Li River, drifting by the current on a bamboo raft?

Bamboo Rafting on the Li River 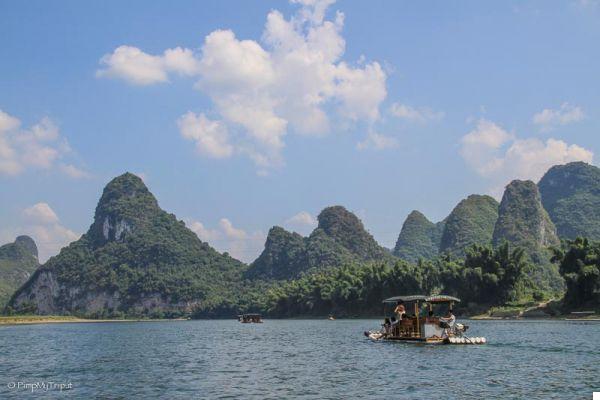 Da Guilin a Yangshuo: the proposals to go down the river are certainly not lacking, but the most famous one starts right from Guilin to reach Yangshuo, which is about 80 km away: the navigation takes about 5 hours.

Da Yangdi a Xingping: the most famous section of the river, perhaps the most scenic but also the most crowded with large boats and fake bamboo rafts coming and going from all over. From Guilin or Yangshuo you have to get to Yangdi, either by public bus or by private taxi and minivan.

Da Yangshuo a Liugong: we have chosen a shorter river tour from Yangshuo to Liugong, lasting a couple of hours. 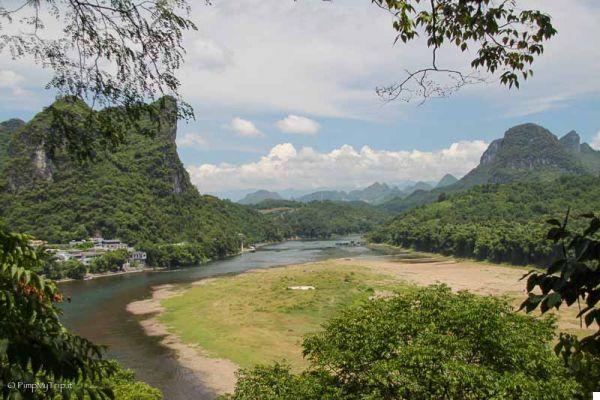 A panorama of the Li River

After visiting the rice fields known as the "backbone of the dragon" (Longji), we ran away from the terrible hostel in Guilin and arrived directly by bus in Yangshuo.

We got up in the morning and immediately went to the shore to negotiate the price. Each hostel in Yangshuo organizes the tour, but by negotiating directly with the boatmen you can save a lot.

In the village, anyone trying to sell the tour to tourists has been literally assaulted by women shouting “Bamboo? Bamboo? ” but you have to beware of rip-offs, which here in this part of China are always around the corner.

It was already ten in the morning of a sunny and clear day in August (strange, in this period the sky is often gray) and already many rafts full of tourists crowded the river. 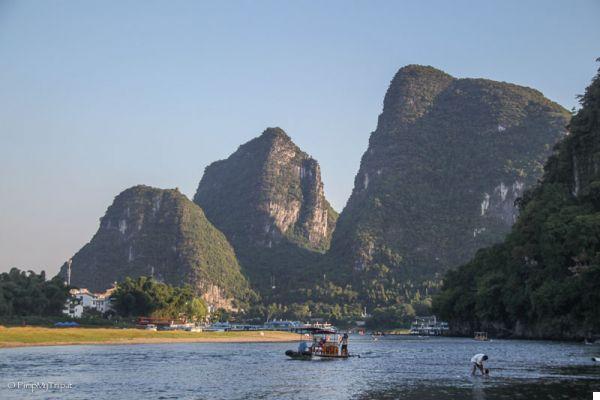 Yangshuo's life flows along the river

Many would have been happy with the beautiful day, I perhaps a little less, I like the fog, it seems to me that it gives the landscape a muffled and mysterious aura and certainly here it would have made the experience even a little more "mystical".

Also for the boats I felt a little disappointment: the "rafts" are actually much more modern than what I would have expected; the bamboos are actually plastic tubes and the engine spits black smoke into the air: on each boat there are “benches” under a tent with seats for 4 to 6 people. 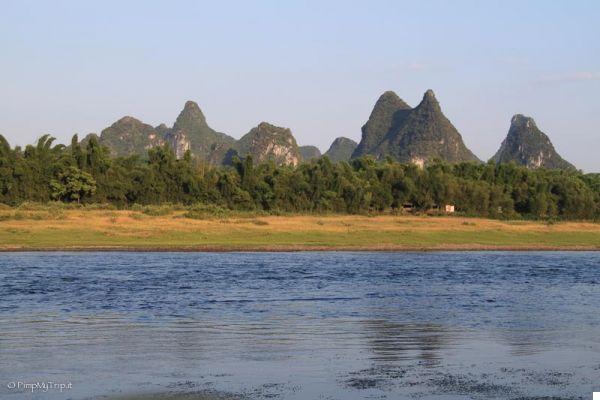 The limestone peaks around Yangshuo at sunset

But if tourists come here en masse, there is a reason: the Li River gives gods panoramas among the most incredible on our planet, it is no coincidence that it is also one of the most photographed places in the world.


Despite the initial disappointment, a few hundred meters along the slow water snake are enough to erase all my disappointment: all around you can see glimpses of authentic life, the farmers in the fields along the river collect the hay with their pointed hats, the rice fields extend as far as the eye can see.

We meet on the river water buffaloes and some fishermen who still use the ancient method of cormorant fishing. The specially trained birds jump into the water and return to the boat with the fish. 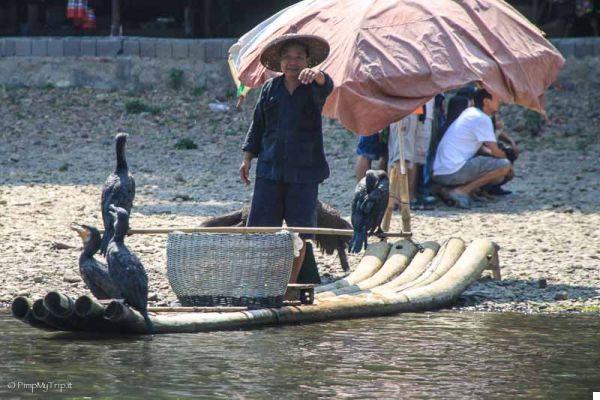 The fisherman uses a method to remove the fish from the bird's mouth and prevent it from being swallowed: tie a rope or ring around the cormorant's neck.

Despite this, the cormorants are not stupid and if every now and then they are not rewarded with a nice fish they refuse to continue fishing.

The stretch between the bubbling Yangshuo and the quaint village of Liugong is perhaps less impressive than the previous ones, but certainly quiet and less crowded. The "captain" of our raft does not speak English very well, but he is kind and shows us the most impressive karst formations indicating the various names. 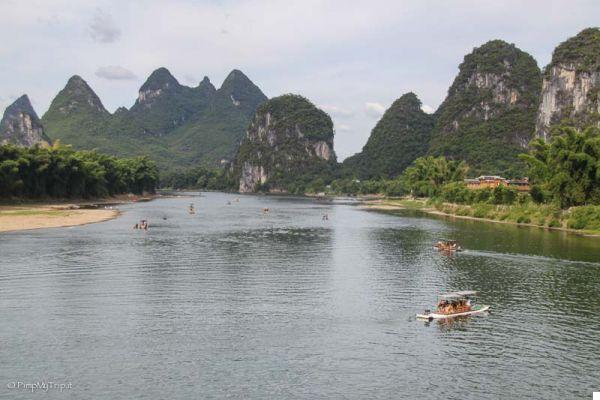 Bamboo rafts flock to the river. If this stretch is the least crowded, think about the others!

In fact, over the years the ancient inhabitants of the Li River have enjoyed imagining gods names suitable for karst peaks: here then are "born" the Hill of Happy Marriage, the Rock that seeks Husband, the Boy who prays to Guanyin, the Hill of the Five Fingers, the Hill of the Dragon's Head, the Hill of the Nine Horses and many others.


Some of them actually deserve the name with which they were baptized, for others it really takes a lot of imagination. 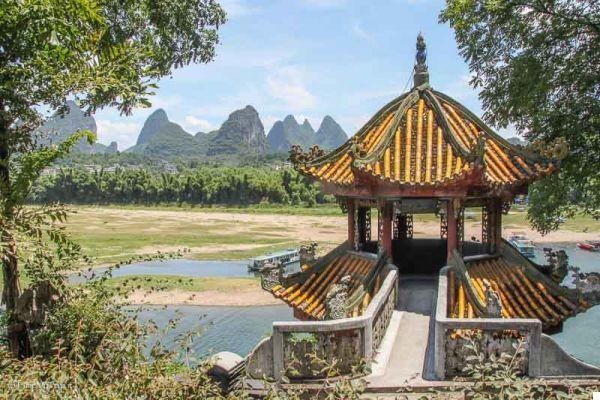 A glimpse of the river from Yangshuo

The two hours pass pleasantly and we return to Yangshuo in time for rent bicycles and go exploring the countryside around the town. 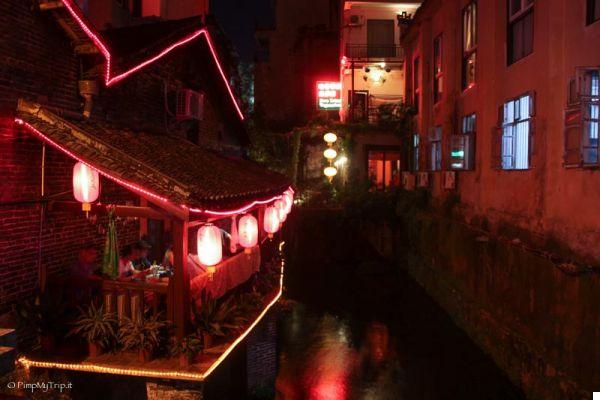 Since the 80s, when China opened up to foreign tourism, Yangshuo was a great alternative to the largest Guilin. In the evening the streets of the city come alive with clubs, bars, restaurants and internet cafes and the streets are teeming with tourists, travelers and vendors of all kinds.

To experience the city in a more authentic way and escape the crowds, it is best to avoid the famous one West Street, the center of the city's nightlife, and look for some restaurants in the side streets where you can eat excellent noodles and lemon chicken dishes.

The whole city is filled with stalls and souvenir shops at all hours of the day and night.

The fruit found in the ubiquitous stalls it's really cool, here in Yangshuo I ate the best maracuja of my life, I will never forget it. 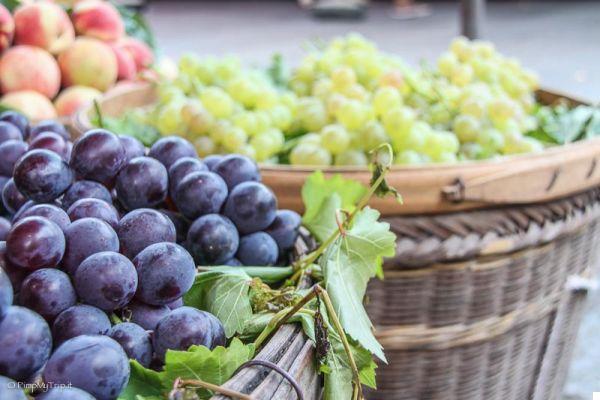 The fruit I bought in Yangshuo was some of the best in my life! Taste the passion fruit, served open and with a plastic spoon!

At morning rent a bicycle and exploring the surroundings is a great idea since the whole area offers excellent opportunities for outdoor adventures: the whole territory is teeming with bike and trekking paths, caves, cultivated fields and farms where you can observe the authentic life of the farmers.

Each hostel and hotel in the city can provide you with a map with the most interesting routes. 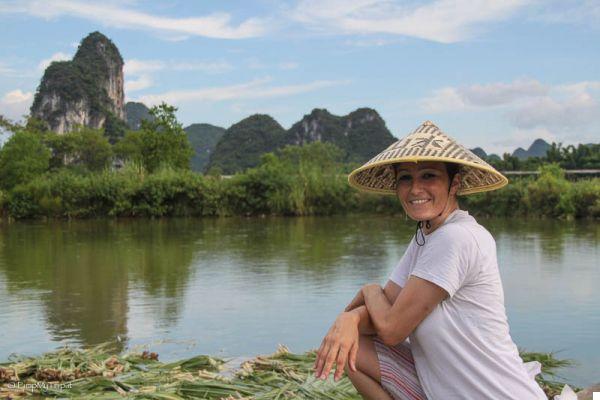 A trip to XingPing however it is definitely a must, from here you can get on Lao Zhai Mountain from which you can enjoy a fantastic view of the river and the valley below.

If the Li River seems too crowded, the Yulong River offers a fantastic alternative.

Barcelona in the Evening, 10 Beautiful Things to Do and the Best Clubs! ❯