Curious and fun facts about China you did not know about

China is considered the oldest country in the world, with a history believed to have started 5.000 years ago. Chinese culture has always been an influential culture and it is China that invented paper, gunpowder, compass and silk, among other numerous ingenious objects.

The mystery of Forbidden City, the incredible modernity of Shanghai and the immensity of Great Wall of China they barely scratch the surface of the whole enigma of China today and hardly satisfy the curiosity that this immense and ancient country arouses in us. It takes a lot of reading and as much travel to be able to claim to know Chinese culture.

In this article we want to describe some of the the most interesting curiosities that you probably don't know about China and its people, and that you may also need to know for your next trip to this magnificent Asian country.

- Table tennis, or ping pong, is it national sport of China.

- Despite its size, all of China belongs to the same time slot and use only one time zone! That is why in some places the sun also rises at 10:00. In the past China had 5 different time slots, but in 1949 the leaders of the Communist Party decided to set only one time for the whole country and since then, everyone has been using the official Beijing time.

- Many historians believe that football originated in China, around 1.000 BC

- China has the largest army in the world, which totals more than 2 million people and is the second largest defense budget for a nation in the world.

- Il Ketchup it is actually a Chinese invention. It was originally a fish sauce called ke-tsiap.

- THEair pollution of China has such a proportion that it crosses the Pacific and pollutes San Francisco, thus contributing to more than a third of the city's air pollution.

- To the people smart phone addicted in China, its own lane has been reserved so as not to bump into traditional pedestrians.

- Unlike ours, in Chinese culture the 13 number he is lucky because the pronunciation of the number 1 and the number 3 leads to the meaning 'assured growth' or 'surely alive'.

- Ethnic Han Chinese make up the majority of the population, exceeding 90% of the population, but in China they are 56 ethnic groups officially recognized and about 200 languages ​​spoken. Yunnan province, bordering Tibet, Myanmar, Laos and Vietnam in southwest China, is home to the most diverse collection of minority groups. Up to 100 different languages ​​are thought to exist in Yunnan, some with a few thousand native speakers.

- Il gelato was invented in China around 2000 BC The first ice cream was a soft mixture of rice and milk packed in snow.

- The Chinese woman traditionally marries in red - a festive and lucky color. White instead symbolizes death.

- The Chinese are under pressure to take down the number of sticks used in order to save the planet's resources. About 80 billion sets are produced annually.

- The Chinese are one of the best math peoples of the world. The history of mathematics in China dates back to the 11th century BC Thanks to China, today we know the number 0, decimal and binary systems, geometry, trigonometry and algebra.

- There are more Christians in the country (about 60 million), and China is well on its way to becoming the homeland of largest Christian population in the world.

- On an average day in China they are consumed 1,7 million pigs.

- The rate of dog consumption in China is declining: most Chinese now prefer to keep cats and dogs as pets. While the snakes continue to be consumed numerous.

- Concern about pollution in Chinese cities has inspired the production of fresh air sold in box. The varieties of the air can be 'primitive Tibet', 'revolutionary Yah'an' and 'post-industrial Taiwan'. 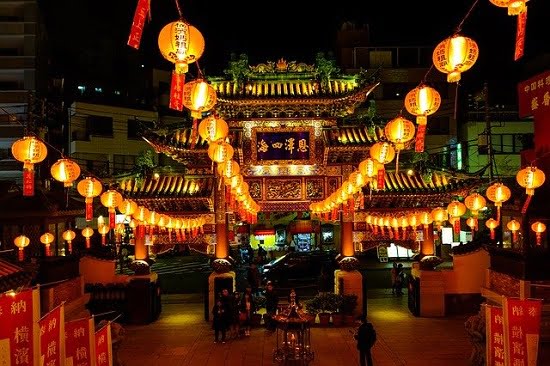 Chinese temple -
Celebrating New Year's Eve in Madeira: what to do and where to stay ❯