The heat is really unbearable, we have been queuing for about three hours to take the cable car that will take us to the top of one of the peaks of the Monte Hua Shan, one of the five sacred mountains of the China. The mountain, located about 120 km from the city of Xian, has five main peaks (which have earned it the name of Flower Mountain), among which the highest is the one to the south, with a height of 2154 m.

We left by bus this morning from Xi'An station under a uniform gray sky and a cloud of smog so dense that we could hardly breathe. 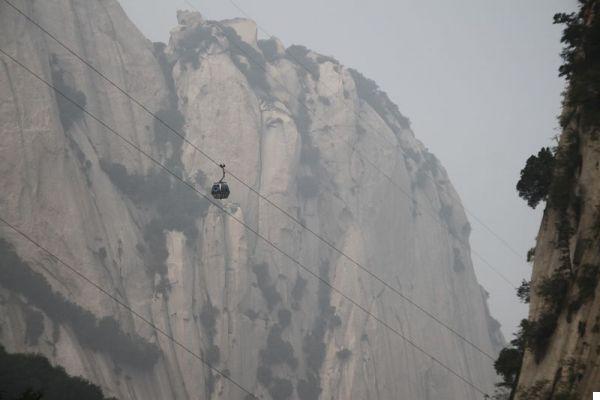 The cable car that takes you to the summit

What has really stunned me about China so far is this thick, poisonous, suffocating curtain, ever present, especially in the skies of big cities, that covers the sun making it just a faded orange ball through dense layers of putrid smog that it sticks to the skin in a thin moist film impossible to remove even after a nice regenerating shower.

Here at the foot of Hua Shan the situation is not much better, the visibility is practically zeroed by the fog, in which the roots of the mountain fade hiding behind the homogeneous gray curtain.

The queue winds for kilometers through a zig-zag path along the road that leads from the coach park to the departure point of the cable car. In the queue, I look curiously at the people next to me, and for the umpteenth time I am amazed by the quantity of food that the Chinese are able to consume anywhere and at any time of day: vegetables, chips, pieces of dried meat, some fruit from the uncertain flavor. 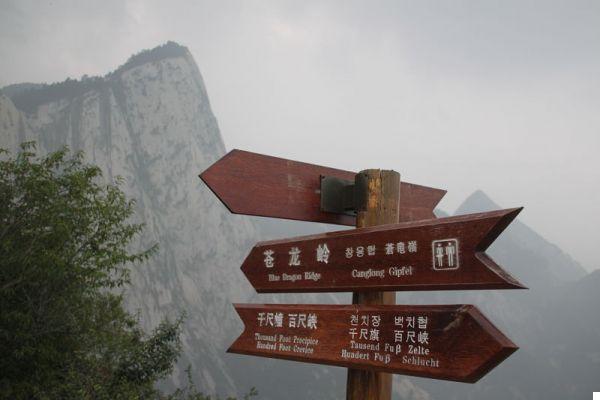 Finally, after more than three hours, together with a couple of French gentlemen, the only other Westerners immersed in the tide of Asian tourism that surrounds us, we manage to conquer, not without a fair amount of effort, the seats on the cable car that will take us up to the top, and while the small cabin goes up along the steep walls of the mountain, leaning against the glass I observe all this greyness around, interrupted only by some green patches of shrubs that populate the granite rocks.

At the top the situation is no different. Thousands of people queuing along the narrow path, around only gray, nothing can be seen, despair finally assails me when even the last shred of hope surrenders to the reality of the situation.

We walk up and down on the paths carved into the compact rock for about half an hour, we can't even get to the first of the Taoist temples that there would be to visit because of the crowd: the scene would be comical if it were not tragic, you can't see anything around if not an infinite tide of Chinese who eat, laugh, push each other, shout, argue, while in the middle the children half buried by the mass push their round faces upwards trying to breathe.

We decide to escape. Needless to say, the queue to take the cable car for the descent is infinite, with an act of courage we opt to go all the way along one of the downhill slopes: the path of the warrior.
The name inspires me a minimum of suspicion, but rather than throwing myself back into that hell of bodies I'd rather throw myself into a cage of lions and so the descent begins. 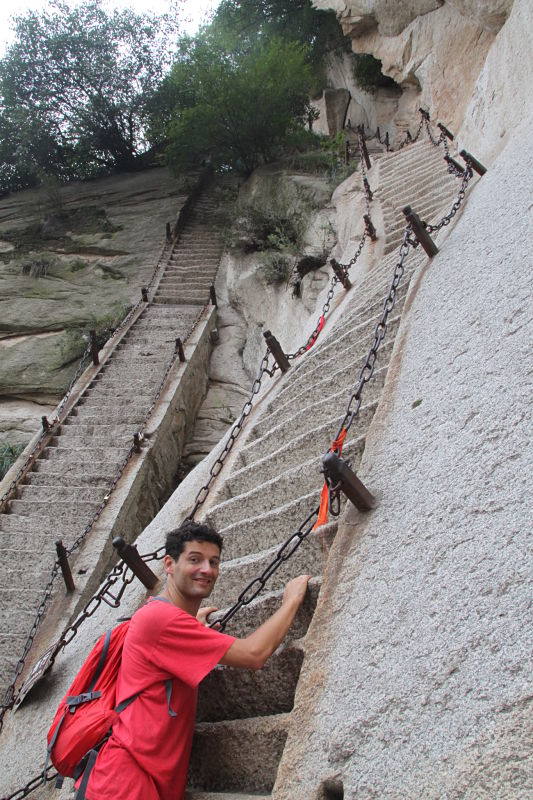 The path is really steep. Small slippery steps have been carved into the rock and wind along the wall almost vertically. As a support for those who go down and those who go up there is a chain to cling to. On a couple of occasions I remain immobilized by vertigo, then with the help of some intrepid character who takes the trouble to help me I manage to get to the bottom after several hours.

I breathe a sigh of relief.

The afternoon has almost come to an end, with my last strength I get on an old cart that someone had the courage to call a bus and I sit wearily on an old unstitched seat, the aspect of which makes me wonder how many generations of travelers they laid their bones there before me.

I still have in my eyes the beautiful and shining images of Mount Hua seen on the web, the massive peaks of gray granite silhouetted against a clear sky, painted in blue, images that convey the peace that led the sages of ancient China to call sacred the mountain in the shape of a flower and, at the same time, I feel pervaded by a great feeling of despair at the still fresh memory of that gray place desecrated by the noises while I feel my mouth fill with the typical flavor of the lost opportunity.

add a comment of Hua Shan, the sacred mountain of China