It was 1970 when near Mount Li, in Shaanxi province, a farmer digging a well in search of water saw shards sticking out of the ground. It was one of the most important archaeological finds in all of China: theTerracotta Army of Xian. 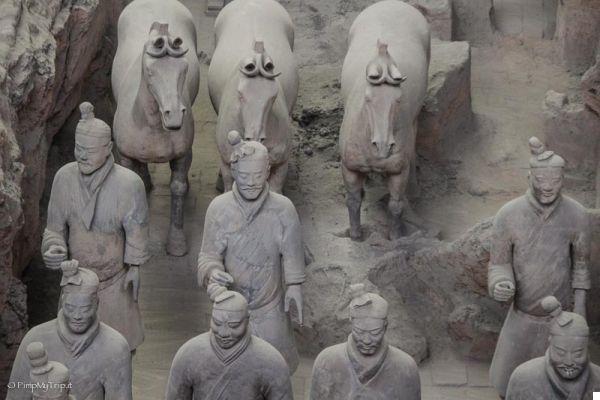 Soldiers, acrobats and archers, weapons and chariots with horses that until then had been lying for more than 2000 years forgotten under 35 meters of earth came back to light: it was the army of the first emperor of China, Qin Shi Huang, which he himself had built more than two centuries before Christ with the arduous task of watching over and protecting him in the hereafter.

Due to the great drought that hit the area during the winter Shanxii province and all of northern China, in March 1974 peasants from the villages around Mount Li began looking for water by digging wells in the countryside.

The peasants collected them and brought them to the village. The elders were very superstitious and thought that having removed those shards from the ground could somehow infuriate the spirits: for days the villagers returned to the place where they were found to pray and light incense to appease the wrath of the gods.

Among them, however, there was a farmer who, as often happens, saw "a little further than the others". Yang Zhifa, this is his name according to ancient books, he decided to warn the Chinese authorities of the discovery.

A team of experts was sent to the site: after more than 2000 years the terracotta army was finally seeing the light again. Since then the excavations have continued slowly and with great caution: to date about 6000 statues have been brought to light which have quickly become the second most famous attraction of the Middle Kingdom after the Great Wall of China.

It is said that the peasants never received compensation for the discovery. All but the crafty Yang Zhifa who got a prize equivalent to his one-year salary and who for the rest of his life supported himself by signing autographs. 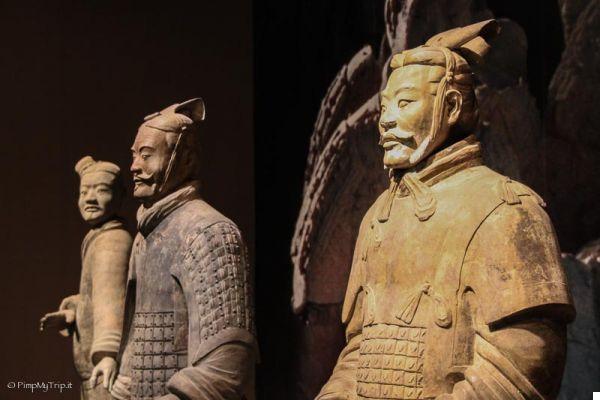 Qin Shi Huang he was a legendary and controversial ruler. The man who, during the 3rd century BC, was able to unify an immense territory under his reign, effectively creating China, was also obsessed with the idea of ​​immortality.

His mausoleum and the army that protected it are located about 35 km east of XiAn in a place called Litong. His burial remains to this day under a 50-meter-high earthen mound and the contents of his mausoleum still remain a mystery.

The ancient writings of the historian Sima Qian narrate that the construction of the immense palace and the army that defends it were carried out with the forced labor of more than 700.000 men and the construction took more than 40 years.

According to other ancient writings and legends, the ceiling of the Mausoleum is built in copper with pearls to represent the night sky and the stars. The floor instead would represent the empire and to recreate the Yellow River and the Blue River that flow towards the sea would have been used some ingenious machinery capable of making mercury flow instead of water.

In fact, in ancient times there was the belief that mercury led to immortality. Ironically, according to legend, the emperor himself died of mercury poisoning which he ingested in large quantities to escape death.

The high rate of mercury pollution in the ground around the mausoleum is, according to Chinese authorities, one of the reasons why it has not yet been unearthed.

Archaeologists, on the other hand, argue that at the moment we do not have the right technologies to dig without doing damage, but from year to year the technologies improve so it is not certain that we will never see it. In fact, perhaps they do not have all the wrongs: when the first terracotta warriors were brought to light, a few minutes of exposure to the air and to the sun made the pigments with which they had been colored completely disappear.

To protect his tomb, Qin Shi Huang ordered that an eternal army of 8000 men be built and that it be a faithful replica of the same army that had unified his immense kingdom.

In 1987 the mausoleum of Emperor Qin Shi Huang, of which the terracotta army is a part, has been declared a UNESCO World Heritage Site.

Visit to the Terracotta Army 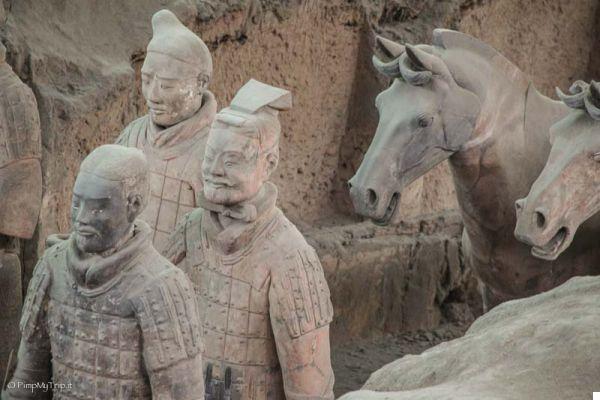 visit the terracotta army it is necessary to leave bags and backpacks at the entrance, buy the ticket and pass a metal detector.

Of the 8000 statues that archaeologists believe the army is made up of, 6000 to date have been unearthed in an area of ​​about 25 square km. It took years of patient and painstaking work to recompose the billions of fragments, but the impression you get when you find yourself in front of the warriors is that they can start marching, alive and well at any moment.


In reality the statues are larger than the human figures: the standing warriors are about two meters tall, those kneeling about 1 meters. The statues were built hollow from the waist up and full from the waist to the feet, most likely for give them more stability and weigh about 20 kg each. At first they were colored, but exposure to air caused the pigments to disappear.

The work that has been done is truly incredible and required an immense effort: 85 masters, whose name of each has been engraved under the feet of the statues, helped by over 20 assistants for a total of over 1500 craftsmen.

Il museum of the terracotta army it consists of 3 Pits (actually there is also a Pit 4 but it is completely empty) and the Exhibition Hall of the Bronze Chariots.

During the visit you are guided through the 3 pits where the army was unearthed. Unfortunately, many weapons were not found because they were plundered by the rebels who took the throne.

The location of the pits and the structure of the warriors reveal the mystery of the military deployment in force during the imperial period.

For sure Pit 1 is the most impressive: more than 6000 warriors, archers, crossbowmen and horses, lined up on 9 corridors in serene composure, convey a feeling of strength and power as one would actually expect from a real army. The statues are striking for their realism and attention to detail: The face of each statue is different from the others, no two are alike and the abundance with which they have been modeled is truly amazing.

The military equipment and harnesses of the horses were executed with the same perfection. 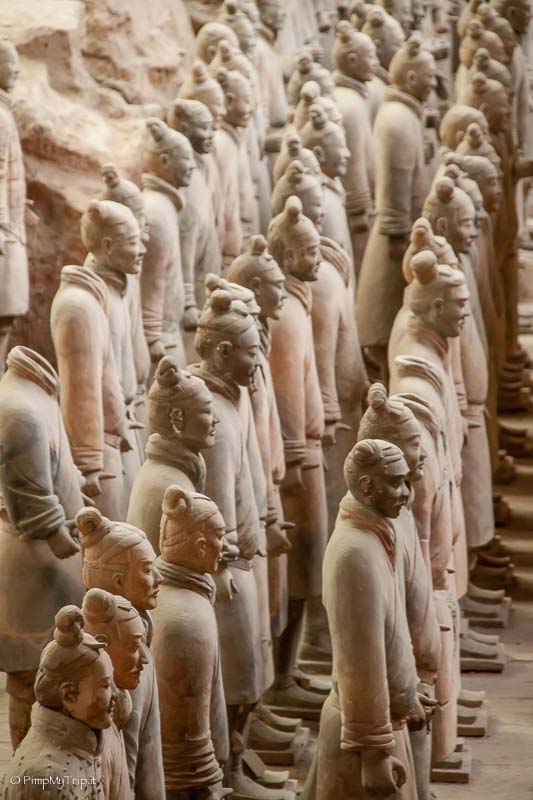 La Pit Two it is located about 20 meters north of Fossa Uno; it is still largely covered with earth and is divided into 4 units that form a precise array: crossbowmen, archers, chariots and infantry seem to be waiting for the moment of battle.

La Pit 3 it was the section dedicated to the army headquarters: statues depicting high officers, attendants, magnificent horses and a chariot were recovered.

Pit 4 is another mystery of the terracotta army: it is in fact completely empty.

Also not to be missed during the visit Exhibition Hall of the Bronze Chariots where two bronze chariots found 20 meters from the emperor's mausoleum are exhibited.

Each chariot, consisting of approximately 3,400 pieces is drawn by 4 horses and were almost entirely made of bronze, but adorned with more than 1,700 pieces of gold and silver (which formed the ornaments) each.

In my opinion Pit 1 is the most impressive of all, for this reason if I went back I would do the opposite route from the recommended one: I would start from Pit 3 then Pit 2 and I would keep the highlight at the end.

The warriors are so well reconstructed that it is really difficult to imagine that they are authentic and not tarot cards.

Moreover, the Chinese police recently (January 2017) found and destroyed a fake terracotta army not far from the real one. 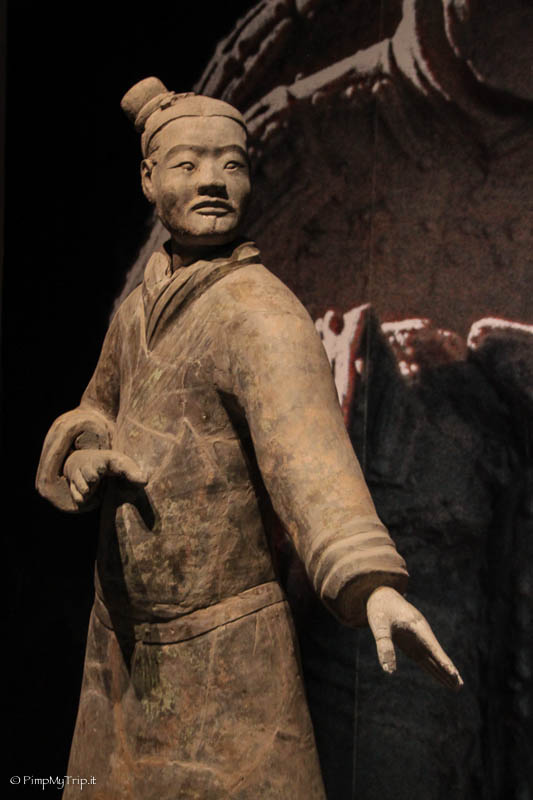 The Terracotta Army is located in Litong District, about 30 km east of Xian which is by far the best starting point for the visit.

Open every day, the cost of entry varies according to the season.

It is not possible to take pictures with the flash indoors.

The toilets are "Chinese-style", equipped with a great spirit of adaptation, do not forget the toilet paper and a hand sanitizer. I've been there ... Greetings!

How to get there from Xian, Beijing and Shanghai

If you really want to go the extra mile to get toterracotta army from Beijing or Shanghai it can be done in two ways:

By plane to Xianyang International Airport of Xian (respectively 2 hours flight from Beijing and 3 from Shanghai), take the Airport Shuttle Line 2 (or a taxi) to the Xian train station and from there take the tourist bus no. 5 (above it says 306), 914 or 915 up to the Terracotta Army (about 50 minutes).

By train up to Xian North station (6 hours from Beijing, 10 from Shanghai). From here, free shuttles are scheduled every hour to the archaeological site (about 1 hour).

Although the statues of the terracotta army are located on the site where they were excavated, sheds have been built above them so they can be visited all year round.

To avoid the holiday periods of the Chinese:

In China you must always beware of scams because I'm always on the prowl. The first scam is perpetrated against tourists to take the bus. The public buses are gray buses with 40 seats and the ticket is done directly on the bus.

Some small tourist buses (sometimes with the number 5 written on them!) Convince tourists that they are public buses. They are generally smaller (20 seats) and will make you waste a lot of time visiting places that have nothing to do with the terracotta army by pushing you to buy souvenirs!

Don't buy the book that seems signed by the discoverer of the terracotta army Yang Zhifa, they are all fake! Among other things, they charge a lot of money for the fake autograph (they asked me 30 euros).

At the entrance you will also find guides, be careful to take them, few speak (and even poorly) in English and some of them will convince you to buy something in the souvenir shops or in the cousin's stall.

Around the Terracotta Army area souvenir shops, restaurants and stalls selling cat and dog furs have sprung up like mushrooms. I advise you not to buy anything here: the prices are really high, at the Xian market you can find the same things for a tenth of the price.

If you can bring your own food. The restaurants and street food here are expensive and of poor quality.

Perhaps in addition toTerracotta Army of Xian may also interest you visit the Forbidden City in Beijing.

London in Winter: 13 Beautiful Things to Do and See ❯

Visit the Great Wall of China from Beijing (avoiding the queues)

add a comment of The Terracotta Army of Xian: History, Visit and Legends