After the stifling humid heat we endured in Xi'an and after the disappointment of Monte Hua Shan, which we only managed to glimpse in the thick fog, the arrival in the Valley of Jiuzhaigou with its clear blue sky it's more of a relief, I think, as the bus slowly climbs through the woods along the winding road.

We landed here in this valley located on the edge of the Tibetan-Himalayan Plateau in the north of Sichuan province after a nightmare day, thanks to Air China, between delays of hours, diversions to other destinations, landings and take-offs, in short, a massacre for my poor neurons, already put to the test by the old and not very reassuring Boeing 767. 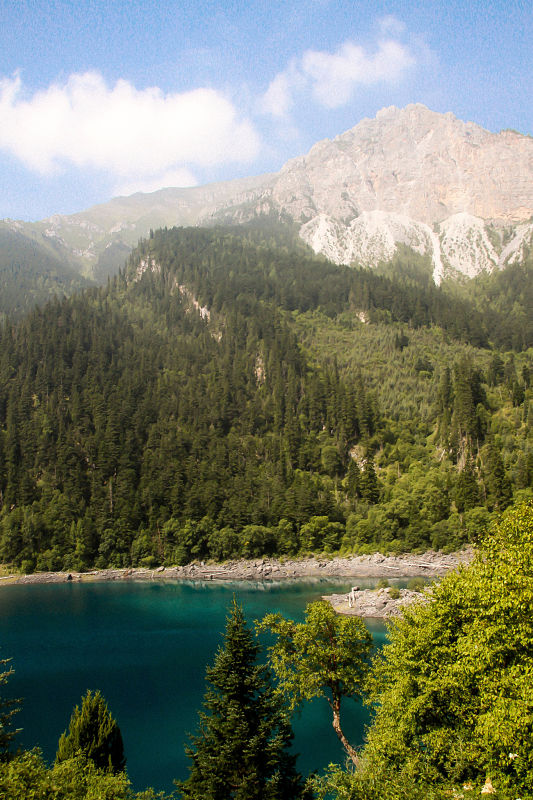 This morning after a night in hostel (recommended by Lonely Planet but believe me to be shunned like the plague) we headed to the park entrance, where after paying the ticket we were loaded on this bus in the midst of a crowd of very noisy Chinese people.

La Valle di Jiuzhaigou extends for about 30 km in length and buses run continuously, so that tourists can get on and off at will, on each vehicle there is a guide who strictly in Chinese gives various information, but that is not for me much help. 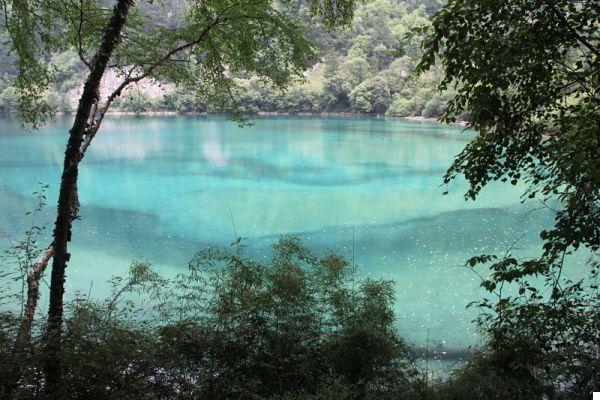 The Valley of the Nine Villages, so called because it hosts nine Tibetan villages, presents itself to our eyes as a fantastic natural scenario, with its lakes, waterfalls and very green woods, decorated by the high peaks of dolomite and tuff of the Minshan mountain range that rising more than 4.500 meters high, they form an elegant and wild frame.

The river flows in this valley formed by thousands of years of tectonic, glacial and hydrological activity, forming these lakes with an almost magical color, thanks to the minerals present in the water that give it iridescent shades of green, blue and cobalt. 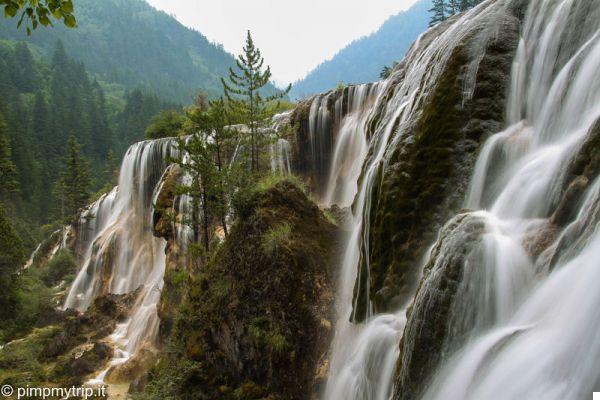 The "Pearl Shoal" waterfalls of Jiuzhaigou

The park is a true paradise for nature lovers with an ecosystem consisting largely of virgin forest, which attracts a large number of brightly colored birds during the autumn.

The presence of more than 220 plant species, some of which are endemic, and the local fauna which also includes endangered species such as the giant panda or the snub-nosed monkey have rightly earned it the title of UNESCO Heritage and Reserve. Monadial of the Biosphere (UNESCO page) 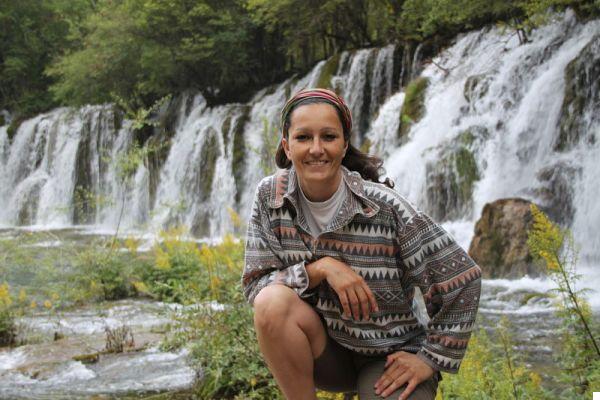 Other waterfalls in Jiuzhaigou

Along the way you will pass through villages where there is clearly no lack of points used and transformed into real tourist traps that sell every type of gadget possible and imaginable, even if fortunately they have been located in specific points.

In short, thank goodness, the gigantic machine of the unbridled economy that in China is slowly engulfing the culture of the country here seems to have not yet managed to extend its tentacles above everything, even if clearly with tourism on the rise, the accommodation facilities, bars and clubs are multiplying at supersonic speed and it will not be long before this still somewhat wild place becomes yet another, immense, playground. 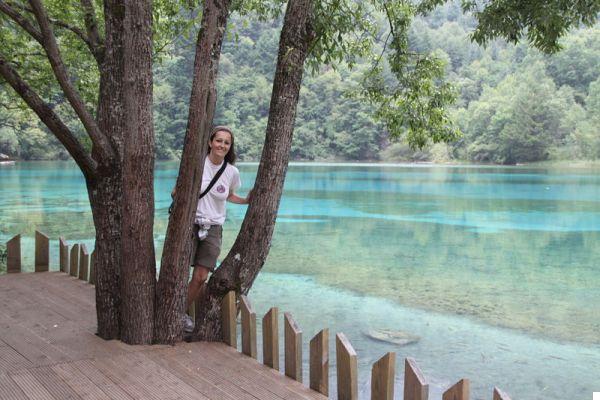 How to get to the Jiuzhaigou Valley

By plane: to Jiuhuang Airport (JZH) there are flights from all major cities in China.
To get to Jiuzhaigou from the airport you need to take a bus (when I went there was one every hour until 11pm) or take a taxi.

Long-Distance Bus: Although it takes 8-10 hours, buses between Chengdu and Jiuzhaigou are very popular, due to the very affordable price.
There are two lines, the East Line and the West Line.
The West Line (at the time I made it the road had just been restored) crosses the whole area hit by the Wenchuan earthquake, and is very suggestive.
Tips&Tricks:
1- Buy tickets at least the day before, the seats disappear quite quickly.
2- buy yourself food and water, even if the bus stops quite often in the rest areas
3- try to arrive at the bus station a few minutes before departure

There are two stations in Chengu from which buses leave for Jiuzhaigou:
1 - The first is the Chengdu Tourist Transportation and Service Center (also known as the New South Gate Bus Station), which is located at 57 Linjiang Road
2 - the second is the Chadianzi Bus Station
Find out about the timetables because they are different depending on the station you choose
I paid for the return ticket from Jiuzhaigou (August 2011) around 13 euros.

in a private car: it is possible to have a private car taken to Jiuzhaigou from / to Chengu, but in 2011 we were asked about 300 euros.

Khan el Khalili: How to Trade as a Real Professional ❯

add a comment of Jiuzhaigou Valley, the Secret Treasure of China