Cape Verde is a perfect destination for all those seeking sun in winter, but also year-round beach vacations on exotic and paradisiacal beaches. This remote country, comprising 10 islands and 8 small islets in the Atlantic Ocean, offers stunning deserted beaches and exceptional mountain scenery.

The archipelago is a fascinating mix of Portuguese and African influences, perceived not only in the architectural style of many buildings and in the different musical styles, but especially in the food, where Portuguese fish dishes, laden with garlic and olive oil, are combined with African-style dishes such as stews, beans, corn and tropical dishes. crops.

Cape Verde varies greatly in character and landscape on each island. And it is the variety that makes this country an unusual and captivating destination, ranging from spectacular green mountain ranges to deserted beaches and volcanic landscapes scattered among the islands.

Where is Cape Verde

Cape Verde is located 500 km off the west coast of Africa, west of Senegal. It is an archipelago of volcanic origin, which arose from the separation between the African continent and America, in addition to the Canary Islands, Azores and Madeira. This grouping of archipelagos forms the so-called Macaronesia.

When to go to Cape Verde

Cape Verde has warm temperatures all year round, being the archipelago located between the Equator and the Tropic of Cancer. However, there is a rainy season from August to October when rainfall is unpredictable. The least hot months are December, January, February and March.

The best time to visit Cape Verde is from February to June, when the days are long and sunny, and it is not too hot. Light clothing is recommended throughout the year, suitable for a tropical climate.

Cape Verde's climate is mild, with ahot and dry summer. Rainfall is scarce, with only a few rare showers from June to February. Some islands almost never see rain and they are: Sal, Boavista and Maio. The wettest islands are Santiago, Fogo and Santo Antao.

Vacations in Cape Verde: what to do

Cape Verde is a destination for people who have a bit of an adventurous spirit within them. There are many interesting activities to choose from, such as various excursions and day trips.

The islands offer excellent conditions for water sports, such as diving, sailing, water skiing, jet skiing, kite surfing and sport fishing. Windsurfers come from all over the world to have fun in Sal and Boa Vista.

Near Santiago, you can scuba dive to discover several 16th century shipwrecks scattered on the seabed. While eels, yellowfin tuna, humpback whales and many other marine species can be seen in the crystal clear waters of Boa Vista. Divers can also explore underwater caves formed by lava.

Santo Antão is ideal for canyoning, while Fogo is a paradise for ecotourism lovers. A vacation in Cape Verde is a great option for families, groups of friends or couples, because there is always something to do for everyone!

Which island to go on vacation in Cape Verde

The main tourist islands in Cape Verde to go on vacation to are Boa Vista and Sal Island. They are also the only 2 islands that have flights . But which one to choose, better the island of Sal or Boa Vista?

Sal Island: what to see, what to do and where to stay

With its sandy beaches, it is the tourist island par excellence of Cape Verde. It is nice to relax on the beach the day after your arrival, but it would be a shame to remember this image, the island should also be turned and visited.

The island owes its name to the salt, which was mined and shipped between the 18th and 20th centuries. The highest point of the island is Monte Grande, 18 meters high. Sal is a volcanic island with vast areas of inland sand and miles of beaches. It is probably the most touristic island of the archipelago.

The best places to visit are Espargos, the capital of the island, Santa Maria, Pedra de Lume, Palmeira and Murdeira; while to stay we recommend only the city of Santa Maria.

Santa Maria is definitely the best place to stay on the island. The town is located at the southern tip of the island, about 20 minutes drive from the airport and the capital, Espargos. It is also Sal's main tourist destination.

The town offers beautiful beaches, many restaurants, bars and hotels, and a quiet and very pleasant atmosphere. The main areas are the pier and the square. Being a developing destination, also new residential neighborhood located at the east end of town.


Both the eastern and western beaches offer many water activities, such as diving, jet skiing, surfing and windsurfing. The famous dunes, Ponta Preta beach and the largest and most modern hotels and resorts are located in the western area.

Espargos, located in the center of the small island and just north of the international airport "Aeroporto Internacional Amilcar Cabral", is the capital of the island. There are a couple of hotels, stores and a church. From here, sandy paths lead to the uninhabited northern part of the island.

Murdeira is a residential village located 9 km south of the island's capital Espargos and 10 km north of Santa Maria on the west coast. The village consists mainly of apartments and hotels, with bars and restaurants.

The village is located in the center of a small cove, within the Murdeira Bay, which is a much larger reserve. The area is of great interest for its rich underwater marine life and a small coral reef.

The main port of the island is located in Palmeira, a town in the northwest of the island. The center of Palmeiras is a bit primitive, there is, among other things, the old covered market. There are a few bars and restaurants, but no hotels or various accommodations.

Piedra de fuego is a small fishing village with a marina. The locality offers an important golf course and near the old salt mine, a World Heritage Site, not to be missed.

Boa Vista Island: what to see, what to do and where to stay

Boa Vista is the third largest island of the Cape Verde archipelago. Similar to the island of Sal and very touristic, it has 55 kilometers of white sand beaches and crystal clear waters. It is a fairly flat island, Monte Estância is the main relief with a height of 390 meters.

The main characteristic of the island are the sand dunes, some baobab trees and the oasis of date palms located almost everywhere. The interior of the island is arid, except for the lush green North Valley.

The island has wide and beautiful sandy beaches, bathed in clear turquoise blue water. Among the most beautiful beaches, we recommend you to visit Praia de Chaves and the extensive beach of Curralinho and Praia de Santa Monica in the southwest of the island, authentic natural paradises.

The beaches are a paradise for water sports lovers, besides windsurfing and kitesurfing, you can practice surfing and many other water sports, such as diving to admire the beautiful barrier reef. Although the beach is the symbolic place to vacation in Boa Vista, there are many other things to do on the island, including numerous excursions.

Boa Vista is the perfect place for nature lovers and paradisiacal beaches, but also for a quiet and relaxing vacation. If you are looking for an area to stay, Sal Rei, the capital of the island, is probably the best choice.

How to get to Cape Verde

The only way to get to Cape Verde is by plane. L'island of Sal has direct flights from Milan and Rome operated by the national airline TACV Cape Verdean. For theIslade Boa Vista, the only company that operates flights is NEOS, which also makes connections with the island of Sal.

Find a cheap flight to Cape Verde from Spain

Since January 2019, the rules for entry into the country have changed. It is always passport required, but the entry visa for citizens of Schengen countries has been abolished.

However, you have to pay for the new one. Airport Security Tax (TSA). The cost is 31 euros for adults and children over 2 years old. You can pay on the website www.ease.gov.cv or upon arrival at the airport.

For more updated information on the required documents, it is advisable to consult the Cape Verdean Embassy in Rome or the Honorary Consulates in Naples, Florence, Turin and Palermo. 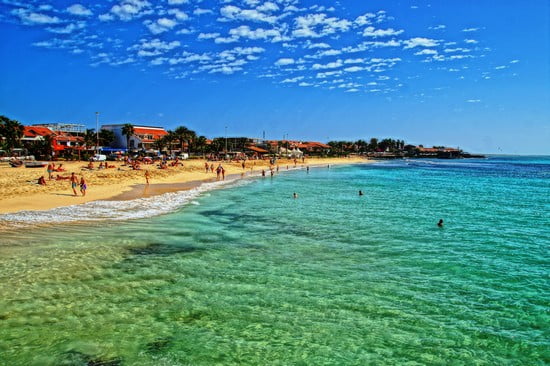 add a comment of Where to go on vacation in Cape Verde: which island to choose and where to stay