If you are looking for ideas for Cadodanno for a close but interesting trip with a nice Christmas atmosphere, Christmas markets, fireworks and even a bit of romance, why not think of Switzerland? 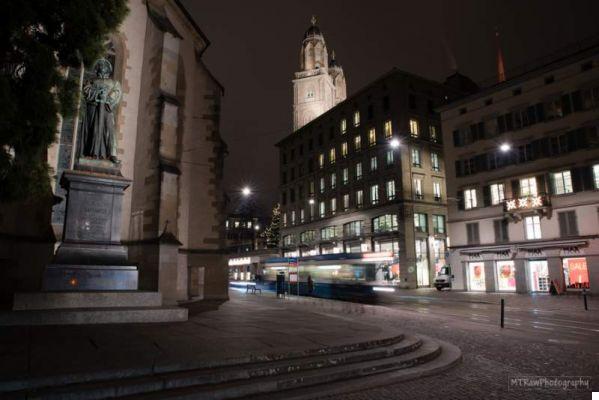 Most people probably still associate Zurich to the stereotype of the tax haven, but the city has much more to offer than banks and luxury venues and everyone can make the most of their stay according to their tastes and their pockets. Of course, the prices are quite high, especially in the high season such as New Year's Eve, but with some precautions it is possible to avoid bloodletting.

How to get to Zurich

So, if you don't mind traveling for several hours, I highly recommend this solution, checking the various Flixbus routes to see if it might be convenient for you to make the entire journey on these comfortable buses equipped with bathroom and coffee maker.

Sleeping and eating in Zurich 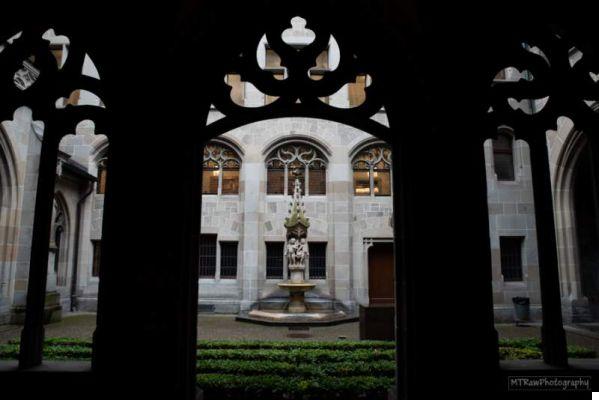 One of the 1200 fountains in the city of Zurich

As for the accommodation, we were very lucky: a couple of our friends hosted us in their house and they also worked hard to cook us some really excellent typical dishes, among these I recommend you absolutely taste the Raclette (melted cheese on boiled new chips, gherkins, spring onions and other pickles) and lo Züri sliced ​​meat (veal stew cooked with cream and mushrooms) typically accompanied by hash browns (baked or fried potato pie).

At lunch you can choose to take advantage of the hot tables made available by Migros supermarkets, which offer sandwiches, cold and hot dishes at very cheap prices and represent a valid alternative to the ubiquitous McDonalds. The presence of approx 1200 fountains with drinking water located in every corner of the city, of every style, shape and size, they then ensure that you quench your thirst whenever you need it.

How to get around 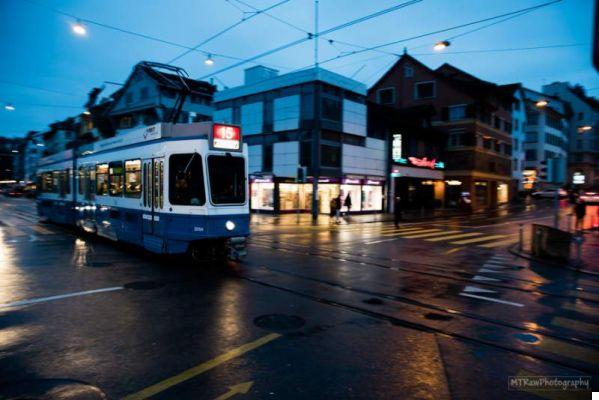 The tram is the best way to visit Zurich

Most of the sights are within a narrow pedestrian area on the riverside Limmat, which cuts the city center in two. The others are easily accessible by tram. It is not recommended to travel by car to visit the city, as most of the streets in the center are pedestrianized and there is a charge for parking.

Better to opt for public transport consisting of trams, buses, trains and ferries and, as expected, as efficient as it is expensive: the cost of the ticket is 4,30 Swiss francs (CHF) for 60 minutes, but it is definitely worth buying the day ticket for the price of 8,60 , 24 CHF, which is valid from the time of issue until the next 110 hours. Therefore, it must not be stamped, the date and time printed on the ticket at the time of purchase from the automatic ticket machines present at all stops, which are always accompanied by a map and information on timetables and connections, are valid; however, it is only valid within the area in which it was issued. The area of ​​the public service network ZVV is, in fact, divided into zones, for example that of the center is 121, while the one where the airport is located is XNUMX; therefore if you plan to cross two or more areas it is good to consider buying the ZürichCard which allows free circulation on public transport throughout the city and is available in two variants: 24 hours for 24 CHF and 72 hours for 48 CHF.

What to see in Zurich

If you only have one day, you can leave from the central station, theCentral Station and stroll in the street most coveted by shoppers: the famous Station cup. In fact, it hosts the most exclusive boutiques and jewelers in the world and ends in the most important ferry landing point, the Bürkliplatz, from which it is possible to enjoy spectacular views of the lake and the mountains.

Remaining west of the river, you can enter the maze of alleys and picturesque squares flanked by ancient romantic-looking residences that characterize the medieval old town: theOld town. Here I recommend visiting the church Fraumünster, famous for its splendid stained glass windows made by Chagall in 1970; then don't miss out St. Peterskirche, the oldest church in the city, which displays the largest facade clock in Europe.

A little further on, you can go up to the large square Lindenhof, from the top of which you can admire a superb view of the city. Site of the first Roman settlement dating back to 15 BC, it is now a tree-lined square where you can relax on the benches, play bowls or chess on the huge concrete chessboards with large pieces carved in wood and available to anyone. 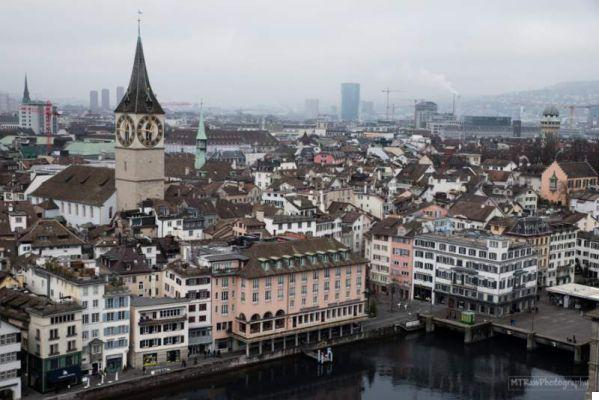 Passing on the east bank of the Limmat, you can enter the tangle of cobbled streets of the historic district Niederdorf, where trendy cafes and bizarre shops alternate. You can't help but notice the imposing Romanesque and Gothic cathedral Grossmünster, whose two tall towers stand out against the sky overlooking the buildings of the city. At the cost of 4 CHF it is possible to climb to the top of one of the towers from which the eagle's view over the roofs is truly breathtaking.

Not far away, on the river bank, is the church Water church, which according to the legend was built on the place of execution of the patron saints of Zurich: Felix and Regula. Next to it is theHelmaus, a Baroque structure that in ancient times was used as a court and covered market, but today it has been transformed into an exhibition space for young Swiss artists, with free admission.

If your stay also includes a second day, you can consider visiting the botanical garden Botanical garden: large collection of beautiful plants from all over the world with free admission; reachable by bus 33 and 77.

Not far away, inside the parco Zürichhorn nestled on the western shore of Lake Zurich is the Cinagarten: small paradise inspired by a typical garden of Southern China and reachable by buses 912 and 916. Dedicated to the "three friends of winter", that is, winter cherry, pine and bamboo, it was donated to the city following the twinning with the city of Kunming. Here you can walk quietly on the paths between ponds, pagodas, exotic plants, paintings and inscriptions and admire the sculpture in perpetual movement built by Jean Tinguely on the occasion of the national exhibition in 1964. Unfortunately, during the days around New Year's it was closed for restorations and we could only peek through the grates of the closed gates. We then consoled ourselves by walking along the splendid lakefront to the historic center. 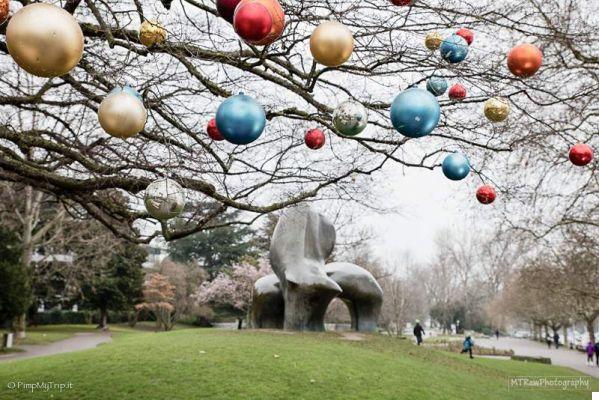 For the more athletic, especially if you have children, I highly recommend the wonderful and huge skating rink The Dolder. To reach it you need to take tram 3 and get off at the Römerhof stop; then take the Dolderbahn funicular and get off at the last stop Eisbahn.

As it is included in zone 110, it is not necessary to purchase an additional ticket. The admission price to the rink per adult is 15 CHF, which includes 8CHF for entry and 7 CHF for renting a pair of skates. If you want to use the lockers, you need to bring a padlock from home or rent it on site for 4 CHF.

For those who prefer art and history, Zurich offers a wide choice of museums, including some ad free entry, such as lo Spielzeugmuseum where it is possible to admire a collection of ancient toys from all over Europe.

Ice rink just before closing in the evening
The festivities organized by the city to sumptuously celebrate the New Year's Eve party take place throughout the Zurich lakeside area, where you can enjoy a wide range of both native and exotic culinary specialties, accompanied by an equally wide variety of music spreading through the streets and squares throughout the center.

The party starts at 20:00 on December 31st and ends at 03:00 on January 1st and the highlight is obviously at midnight, when after the countdown the bells greet the new year and the fireworks display begins, whose fires launched by three ships on the lake sky and water merge in an explosion of lights and colors. Unfortunately, bad weather has ruined this effect a little, partially hiding the fires behind a blanket of clouds.

Public transport runs until 04:00, therefore, despite the crowd, estimated at around 200.000 people, it was possible to return home without problems.

Having the opportunity to stay one more day and seeing that our friends, being residents, got us two tickets to travel all over Switzerland by public transport at a cost of 40 CHF each, we decided to take a trip outside the city by visiting Lucerne e Bern. For those who do not have this opportunity, it is possible to purchase a day pass for 73 CHF. Both cities are about an hour away by train from each other and from Zurich. 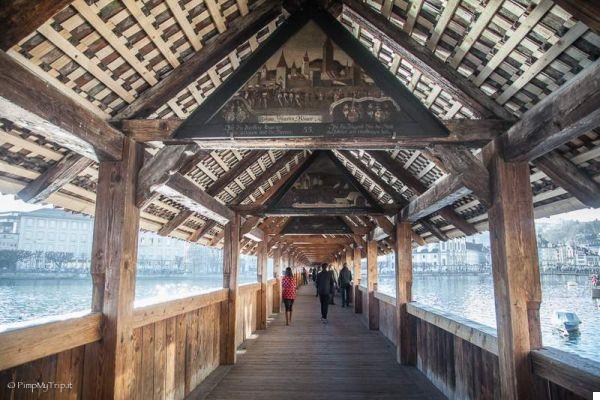 The Lucerne wooden bridge, restored after the fire of August 1993

Lucerne is a picturesque medieval city located on the northern shore of the lake of the same name, behind which rises the majestic Mount Pilate which contributes to enrich the atmosphere with its alpine charm. The oldest district characterized by picturesque streets, monuments, fortifications and churches is located on the lakefront, is ideal for pleasant walks and can be visited in the space of a morning. The most famous and photographed monument is the covered wooden pedestrian bridge Kapellbrücke, which crosses the river Reuss and inside which it is possible to admire the beautiful Renaissance frescoes reproduced during the restoration following the 1993 fire. 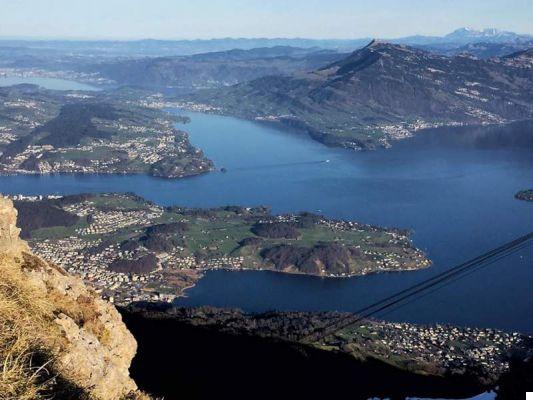 The panorama of Lake Lucerne from the top of Mount Pilatus

If you have two days to visit the city, a great idea is to climb to the top of the Pilate. You can do it either with an easy trek of about three hours, or, if you are more lazy, with the cable car that takes you directly to the top from the city: from here you can observe a wonderful view of Lake Lucerne and its surroundings.

Bern it certainly deserves more time to be explored than just one afternoon, but this was the time available to us and will probably be the destination of a second visit.

The arcades that extend throughout the historic center have protected us from the pouring rain, which despite that welcome shelter has partially ruined our trip, without however affecting the charm of the alleys, the fountains, the Zytglogge the clock tower, the Bundeshaus seat of the Swiss Parliament; even though it's because of him the family of bears that lives in the Bear Park (bear pit) did not show up.

48 hours in Antigua, the Ancient Capital of Guatemala ❯

add a comment of 3 ideas for New Year's Eve: Zurich, Bern and Lucerne