Discover Inagua in the Bahamas this winter

Author and references
Discover Inagua in the Bahamas this winter 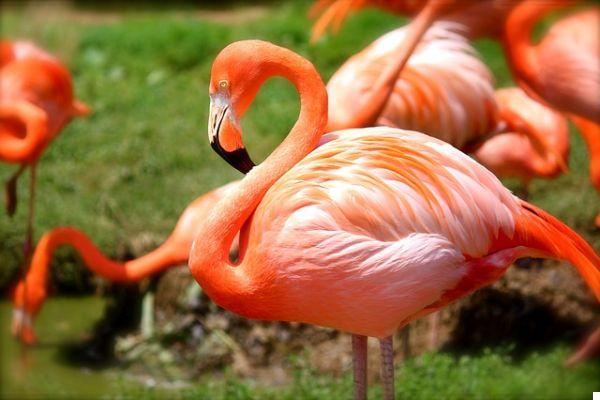 A naturalistic journey, where Mother Nature has decided to make Inagua a paradise for ornithology lovers. West Indian pink flamingos, the national bird of the Bahamas, live in great numbers in the Great Inagua National Park. The marshes created for the extraction of salt have made this island favorable for the nesting of large vermilion birds. But let's find out what Inagua reserves for its visitors.

Inagua is the southernmost island of the Bahamas and is actually made up of two distinct islands: the Great Inagua Island (Great Inagua) and small island of Inagua (Little Inagua). Both are known for their natural environment and serve as great destinations for ecotourists. Great Inagua is the third largest island in the Bahamas, 32km long and 88km wide, and includes the Inagua National Park which covers almost half of the island. The Park is home to over 80.000 West Indian pink flamingos, the Bahama parrot and other pelicans, ducks and hummingbirds found nowhere else in the Bahamas. The small island of Inagua is a protected habitat for endangered sea turtles and has a vast coral reef that prevents navigators and sailors from getting too close to its shores, the island is uninhabited by man and therefore still untouched.

The name Inagua apparently derives from the Spanish meaning "the water is here" and it is really true, these islands are bathed by water both on the coasts and in the interior, rich in ponds and lakes. The Big Island is home to three national parks and reserves, as well as one of the three remaining historic lighthouses in the Bahamas. If ecotourism is your thing, Inagua is the perfect destination.
There are also beautiful secluded beaches all over Inagua waiting to be discovered, different from each other and still very wild where shells and twigs carried by the sea make the atmosphere even more authentic. In the beach of Coconut Grove it is possible to practice snorkeling by swimming next to the green sea turtles. The beach of Morton Salt it is ideal for diving or snorkeling directly from the beach.


Thanks to the low rainfall and the trade winds that blow over Inagua, innumerable natural salt ponds have formed on the island, while the innermost areas are covered by a large savannah and sometimes by prairie where wild donkeys, goats and wild boars roam freely. . There is also a large shallow lake, the Lake Windsor, known as the Pink Lake, which is about 20km long and serves as a breeding ground for the largest colony of West Indian pink flamingos in the Caribbean. The flamingos live in a protected reserve of 460 square km called precisely Inagua National Park. These beautiful rare birds mate and nest in spring and lay only one egg per year. Their brilliant plumage is stunning and is enhanced with a spectacular splash of black under their pink wings. A salty shrimp diet helps keep their dazzling pink color alive. Many other types of sea and shorebirds can be found here, including a rare Bahamian parrot, herons, egrets, pelicans, ducks, and hummingbirds. You can also stock up on Bahamian salt made naturally from seawater, sun and sea breeze.

Also take a look at the video to find out all about Inagua.

You cannot also miss a visit to the Union Creek Reservation comprising a lagoon of 2000 hectares of salt water, the level of which is regulated by the tides, which is used by sea turtles as an ideal habitat for laying their eggs.

You must know that you cannot reach Inagua without a residence permit, dates must be confirmed by the Nassau Abaco or Inagua office prior to your arrival on the island. To reach Inagua there is an airport that serves the island, Matthew Town Airport (IGA) which offers regular scheduled air service from Nassau. The charter service can be arranged through any of the certified local and international carriers. From the sea, there is a weekly speedboat service from Nassau to Matthew Town.


To stay in Inagua we advise you to consult the official website of the Bahamas where you can ask for all the information you need, at the bahamas.com page.

When to go to the island of Inagua?

The best time to visit Inagua is from November to June, to avoid the summer rains from August to October which in any case remain contained within very minimal values ​​compared to the rest of the Caribbean. Air and water temperatures remain high even during the winter, in the cooler months of January and February, with a daily average of 28 ° C. During the breeding season (March-May) you can enjoy the spectacular presence of the large masses of flamingos that set the landscape on fire with a bright pink.

We remind you that Inagua is almost always sunny and warm, therefore visitors should always bring sunscreen, a hat, comfortable shoes and insect repellent with them.

Happy winter on the island of Inagua!

Raja Ampat: a journey to the tropics between dream and reality ❯

Eleuthera, one of the best vacation destinations in the Bahamas

When to go to Antigua and Barbuda, Best Month, Weather, Climate, Time

When to go to the Bahamas, Best Month, Weather, Climate, Time

add a comment of Discover Inagua in the Bahamas this winter