Gaudí in Barcelona: a Different Itinerary to Discover the City

Wherever you go in Barcelona, ​​you cannot fail to feel the presence of Gaudí, the most famous modernist architect in the city.

This Gaudí's itinerary in Barcelona it is a different way of exploring the city following in the footsteps of the one who helped shape its design. 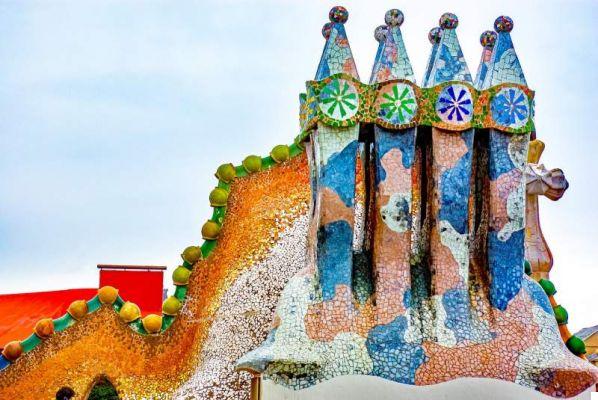 Gaudí and Barcelona, Barcelona is Gaudí. Neither would exist if the other had not been there.

Born in 1852, Anton Gaudí he belonged to the Art Nouveau movement, with his first drawings focusing on Gothic and traditional Catalan architectural styles, but very soon he began to develop that particular style of his, which made him famous all over the world.

His most famous work, the Sagrada Familia, it is not only the most popular attraction in Barcelona, ​​but the most visited monument in all of Spain.

Gaudí he died tragically in 1926 after being hit by a tram. He had left his laboratory inside the Sagrada Familia to go to mass and he was so worn that people, not recognizing him and mistaking him for a beggar, did not immediately rush to his aid.

The brilliant architect that the world celebrates as one of the most enigmatic characters in history he died in the hospital for the poor of the Holy Cross.

Here is an itinerary to visit all the best ones Gaudí attractions in Barcelona.

Where to sleep in Barcelona, ​​guide to the best neighborhoods


Visit to the Picasso Museum 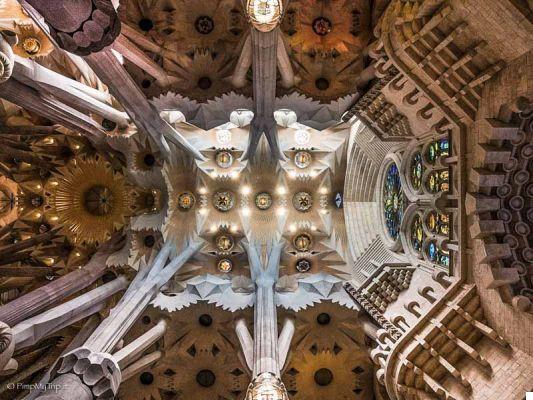 Gaudí's most famous work is like Penelope's canvas: it never ends. The church has been under construction for over 100 years, but luckily it looks like it will finally be completed in 2026.

When I visited the Sagrada Familia for the first time (it was supposed to be 1997) I basically paid the ticket to see some scaffolding.

I went back a second and third time, and now that the interior is finished, the result is absolutely breathtaking.

Gaudí was a devoted Catholic (which is why he was called "the architect of God") and spent the last 10 years of his life working on this project.

The church is unlike anything imaginable: it blends the influences of man, nature and religion in its detailed architecture. The Sagrada Familia also hides secrets, Gaudí in fact left in it many traces of his "belonging" to Freemasonry.

Advice from a friend: buy your ticket online. There is a constant 2-3 hour queue to get in, while it only takes a few seconds when you have Skip the Line tickets. Be the wisest!

In my opinion it is absolutely worth taking a guided tour in English. If you want to spend less buy the ticket with audio guide which costs little more than the entrance ticket alone and covers the history of the church in detail.

Il best moment to visit the Sagrada Familia is in my opinion in the late afternoon when the sun enters through the windows, filling the interior of the church with a cascade of light. 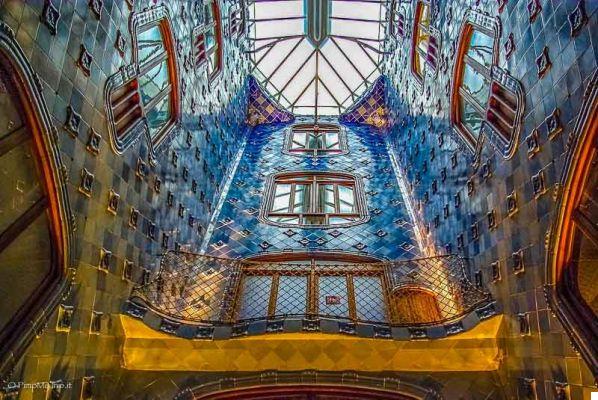 Casa Batllo it is a building restored by Antoni Gaudí in the early 1900s and is by far one of my favorite works.

Gaudí took 2 years on the project, completely renovating the exterior, the main floor, the patio and the roof.

With its wavy shape, without straight lines, it is certainly one of the most captivating of the creations of the mad genius of Gaudí.

La facade is decorated with a mosaic made of broken ceramic tiles (trecandìs) that Gaudí collected from the garbage of a nearby glass factory. The roof is arched and resembles the back of the dragon killed by St. George.

Se buy tickets online for Casa Battló you have a 10% savings than buying them at the ticket office and skipping the line. You can buy them from the blue button below:

The streetlights of Plaça Reial

You may be surprised, as much as I was, to know that Gaudí himself designed the weirdos streetlights in Plaça Reial, in the heart of Barcelona.


It was the first work that was commissioned by him as a young architect, in 1878.

At the request of the city council, Gaudí designed six-armed lampposts, crowned by a winged helmet. Made of cast iron and marble, they were the symbol of Barcelona's commercial power.

A relatively small contribution to the city compared to the grandiose Sagrada Familia but, as I see it, it is just another proof of how versatile Gaudí's art was as well as brilliant (and a little crazy).

Placia Real, just off La Rambla. They are located in a public square, so they are accessible 24/24 and free of charge. 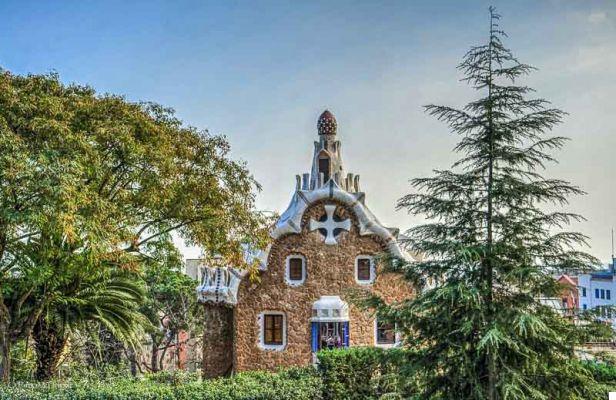 Parc Güell is a 45-acre garden complex designed and built between 1900 and 1914 and visiting it is like being catapulted into a fairytale. From the original project that wanted it a residential complex was later transformed into a municipal garden and is now a world heritage site.

The focal point of the park is certainly the main terrace, surrounded by a long snake-shaped bench.
The park is close to La Sagrada Familia so it's easy to visit both. 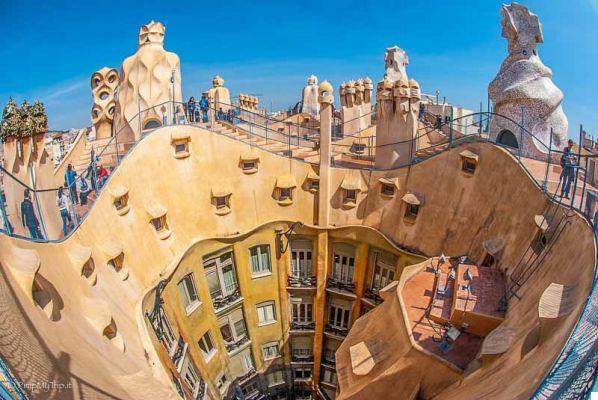 From 1906 to 1910, Gaudí worked on Casa Mila, also known as “La Pedrera” (the stone quarry) for its limestone facade. The goal was to evoke the sense of a snowy mountain.

Gaudí, a Catholic and devoted to the Virgin Mary, designed Casa Milà to be a spiritual symbol: in fact, it included many religious elements such as the statues of Mary, San Michele and Santa Gabriel. Casa Milà fell into disrepair and was partially abandoned until it was restored in the late 80s to its original form.

The most beautiful part of La Pedrera? The 360-degree views of the city from the roof.

All in all, I don't know whether to recommend visiting this house unless you are a huge Gaudí fan. I didn't like it very much, honestly.

Casa Vicens it is the first important building of Gaudí. Built between 1883 and 1888, it was a project made for a wealthy family who owned a pottery factory.

This is clearly reflected in the “trencadis” facade of rough red brick, checkerboard colored ceramic tiles and floral motifs. You can also see some influences of Islamic architecture in its facade and some of its rooms.

Located off La Rambla, the building Palau Güell (Palazzo Güell) does not leave you speechless like the other works of Gaudí. Built from 1886-88, it was designed for one of Gaudí's patrons, Eusebi Güell (the same as the Park to be clear).

The house is centered around the main room which was used to entertain high society guests. The main hall has a high ceiling with small holes where lanterns were hung at night to give the appearance of a starry sky.

Even if it looks a bit gothic, I liked it.

Built between 1898 and 1900, Casa Calvet was built for a textile manufacturer in Barcelona's Eixample district (Gaudí's neighborhood).

The symmetry, balance and orderly rhythm of the house are unusual for Gaudí's works. The curves and double gable at the top and the ledge at the entrance are modernist elements.

It also incorporated mythological and natural motifs, which helped it win the award for best building in 1900 from the Barcelona City Council.

Carrer de Casp 48. You can only stop to take pictures outside the building as you are not allowed to enter this private residence. 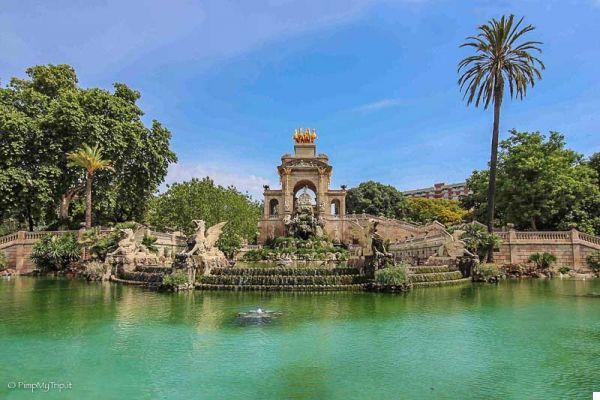 Gaudí helped design it while he was still a student.

He was responsible for the design of the fountain, the music box and the park entrance gate, a project that extended from 1873 to 1882. Baroque in style, the fountain is impressive.

I loved sitting in the park just watching the fountain and the people go by, I found it a great way to get my feet to rest after a busy day around the city.

Although it looks like a fortress, the college of Santa Teresa is a convent school designed by Gaudí for The Order of Saint Teresa of Jesus. The project was already underway when Gaudí was involved, but he made some changes to the plans to better reflect his personal style and his vision.

La Bellesguard Tower, also known as Casa Figueras, was built by Gaudí between 1900-1909. It was built as a second home for Figueras and designed as a medieval fortress. There are some elements of Art Noveaux that give a modernist take on a classic Gothic structure. 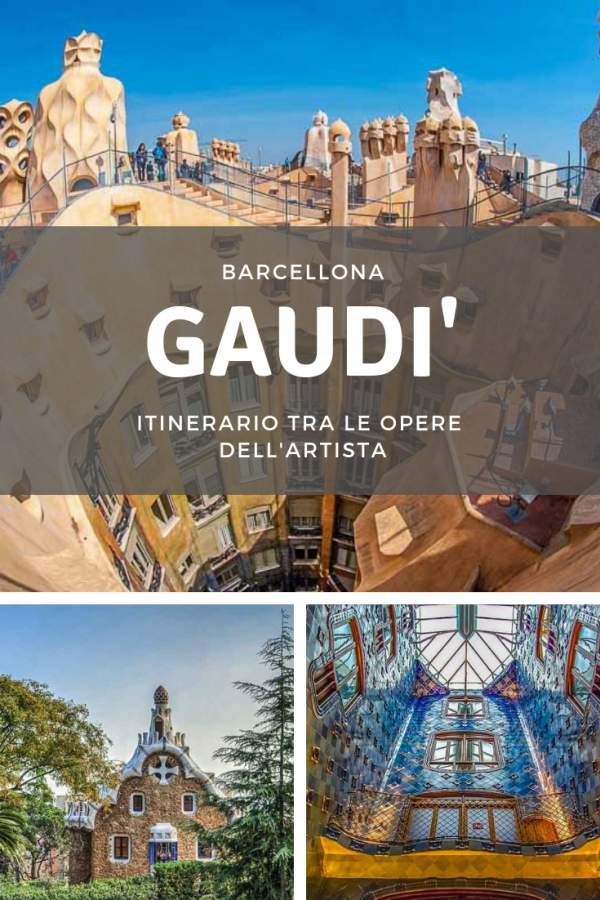 Golden Circle in Iceland, What to See, Itinerary and Map ❯

add a comment of Gaudí in Barcelona: a Different Itinerary to Discover the City