Portofino it is the quintessence of a fishing village: a row of brightly painted houses set like a crown around a sheltered and hidden bay surrounded by lush greenery.

Portofino has a dual personality because, although it is a popular meeting place for VIPs from all over the world, it is also an irresistible destination for lovers of nature, the sea and outdoor activities.

Even though I live near Portofino, every time I go there, I continue to be fascinated by its unique atmosphere.

What to see in Portofino

If you want to know Portofino, visit it on a clear dawn in late spring, when thoughts are still dozing and you can only hear the rocking of the sea. Forget the Hollywood stars, the industry moguls, footballers and showgirls, who are the fiction of this place: for once, savor the authenticity.

Look at the houses in the Piazzetta, they are fishermen's houses; and the few more austere palaces are the homes of old families of owners of steep lands, of captains of sailing ships; set the arcades in front of the boutiques and trendy restaurants, it was there that women, from childhood to old age, created bobbin lace (the real ones, not the ugly machine imitations that are often tried to sell to some perplexed Oriental). 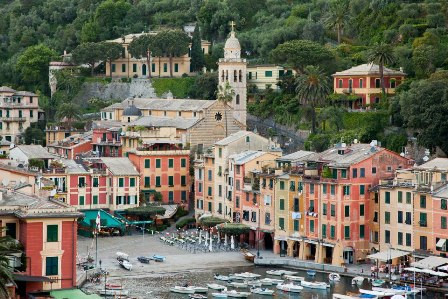 Portofino seen from the Church of San Giorgio

If, while traveling, you have the courage to get up before the sun, at dawn you will enjoy this show, along the pier or in the panoramic churchyard of the Sanctuary of San Giorgio; and, just in case, don't forget to take someone you love with you.

Otherwise, be content to hear the exclamations in a thousand languages, Nordic, Oriental, incomprehensible, but all of amazement and wonder for the beauty of nature and for the unconscious mastery of man in assembling this chromatic puzzle of facades that are mirrored in the sea.

In the village do not miss to put your foot in the parish church dedicated to San Martino di Tours, who lived a few years on the Gallinara Island and who knows that he was not really one of the first VIP tourists in Portofino, the ancient Dolphin Haven already mentioned by Pliny the Elder in the XNUMXst century.

3 - Panorama from the Church of San Giorgio

Then go up to St. George: the church does not offer in itself great artistic merits, but the view will reward you and you will not be surprised to think that that hill was chosen almost a thousand years ago to house the relics of the famous martyr of Cappadocia, slayer of the dragon.

In front of the church, the unlikely and graceful castle of Baron Alfons von Mumm (the one of champagne), whose widow Jeannie Mackay-Watt, with a generous Scottish heart, in 1945 he saved Portofino from the complete destruction planned by the Nazis, at the risk of his own life. 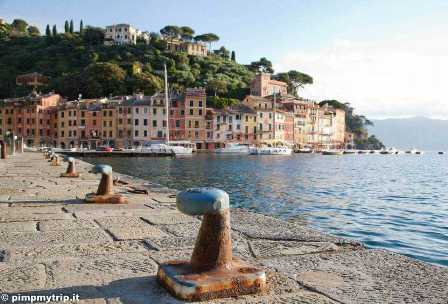 Portofino seen from the end of the pier

From here continue towards the Genoese fortress of San Giorgio, now known as Brown Castle, and do not miss to visit it for the charm of the structure, the view of the village and the garden on the sea: among the stone vaults you will hear echoes of battles, party music of the cream of the British Empire and perhaps even the snoring of the crusader Richard Lionheart, who apparently slept here during the journey to the Holy Land.


At this point of the route you can choose to go down the steep path that leads to the Olivetta beach, or to continue towards the lighthouse for a romantic walk.


For the more accustomed to walking we propose a further one itinerario: from the square where the carriage road ends, go up towards the mountain and take the tiring staircase that leads to Cappelletta locality; after half an hour among the olive trees and vegetable gardens you will enjoy an unusual view of Portofino from above.

For great walkers, there is the possibility to go to Nozarego and then get off at Santa Margherita, or to go toabbey of San Fruttuoso di Capodimonte and maybe go back to San Rocco di Camogli.

How to get there

By plane: Cristoforo Colombo Airport in Genoa. From here you need to take a car or train.

By car: the nearest exit along the A12 motorway is that of Rapallo, located about 10 km from Portofino, which can be reached along the coastal road passing through Santa Margherita Ligure.

By train: from the Santa Margherita Ligure railway station it is possible to reach Portofino by public bus in 15 minutes.

Given the exaggerated costs of Portofino and Paraggi, the best advice I can give you is to stay in one of the nearby towns. Santa Margherita it's a great base and cheaper too.

Portugal, what to see by car, the most beautiful in Europe ❯

Where to stay in Madeira

What to See in Porto in One Day, Walking Itinerary with Map

Algarve one of the main tourist destinations in Portugal

With Tram 1 from Porto to the lighthouse on the ocean

What to see in Lisbon? 20 things to do absolutely!

What to see in Oporto: two days of romantic decadence