Il Vasa Museum is without too many words one of the most incredible things I have ever seen in my entire life: imagine being transported back in time 400 years and finding yourself in front of a real warship of the Swedish fleet, the only one survived from the 17th century. Here, you are at the most famous naval museum in Scandinavia, capable of attracting more than a million visitors a year alone. 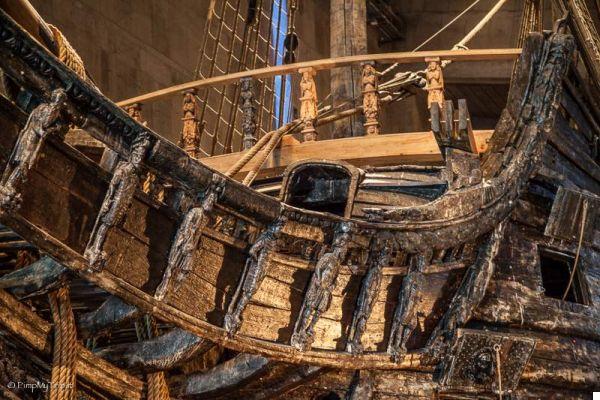 The Vasa, the only vessel in the world that has reached the present day since the XNUMXth century

Il Vasa it sank in 1628 on its maiden voyage. Recovered from the seabed in the early 60s, the ship stands in the center of the museum with 95% of its original wood. The Vasa Museum is a giant room dedicated to a warship, a symbol of strength and colonialism that has spent 300 years on the bottom of the sea to show itself to us today practically intact.

A scientific marvel that has a immense archaeological value.

The museum has been developed on five floors that wind like a spiral around the ship to allow visitors to enjoy the spectacular view from every angle. On the side 9 exhibitions were set up with the objects found on the vessel: you walk in the middle of history with the displays of the original sails, of the barrels that still contained food, medical instruments and, between the iron of the cannons and the clothes of the sailors, the bones of those who did not manage to escape from that vessel that day.

The Vasa was built not only to impress enemies with its battle armament, but also for its sculptures and ornaments. On the side are also exhibited the sculptures that covered the vessel and which were a tribute to the magnificence and power of the then Swedish monarch.

A roaring lion head was the first sculpture to be recovered from the sea. Black, due to the time spent in the depths of the abyss, still bore the marks of the paint that decorated it: golden her mane and red her jaws. 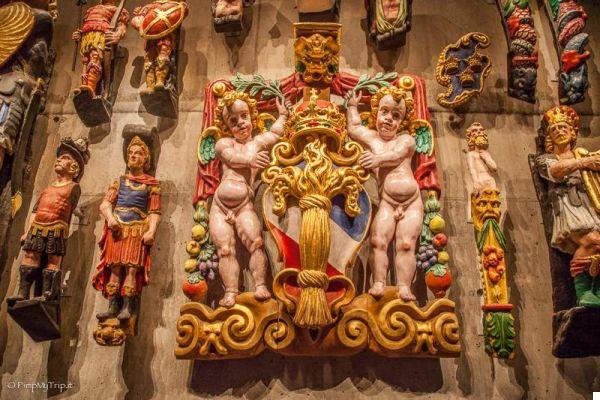 Some sculptures that adorned the great vessel

Each of them had a symbolic meaning. The lion meant courage and the two statues of Hercules (the most impressive sculptures) recovered with it symbolized strength and wisdom.

In the 17th century, "fashionable" meant "extravagant": all the sculptures were painted in bright colors: pink, blood red, acid green, blue like the deep sea. What seems a little kitschy and exaggerated to us, at the time meant incomparable.

A brief history of the Vasa 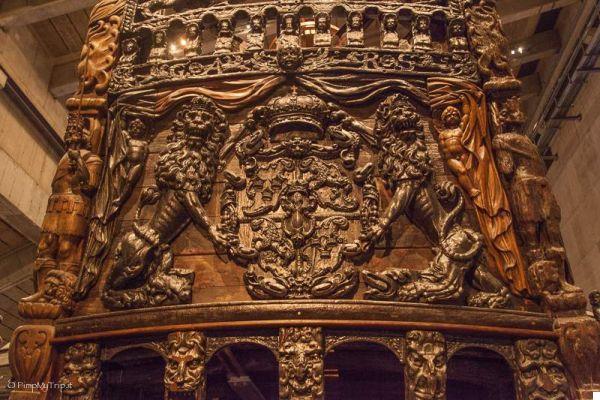 The lions, symbol of the courage of the Swedish empire

"Between 4 and 5 the great and new vessel of the Swedish fleet tilted and sank" are a few lines written in a book on August 10, 1628 to testify what happened that Sunday for us far in time.

But the disaster of the ship that sank in the Baltic on its inauguration voyage is not the end of a story, but thebeginning of another which has survived to us and which still continues every day.

The Vasa was recovered practically intact from the seabed and after a thousand difficulties it was transported from the sand bed on which it lay for more than 300 years, to this museum, one of the most unmissable attractions from all over Scandinavia.


The Vasa was the most expensive and most ornate vessel ever built in Sweden at the time and strongly desired by His Majesty Gustav II Adolf, Most Serene King of Sweden, to demonstrate Sweden's hegemony over the Baltic.
On the day of its launch, all 10.000 Stockholmers who had crowded around the port and on the docks to wish him good luck were instead sad witnesses to what happened: after a few minutes the vessel swayed, tilted and sank in the port of Stockholm. . 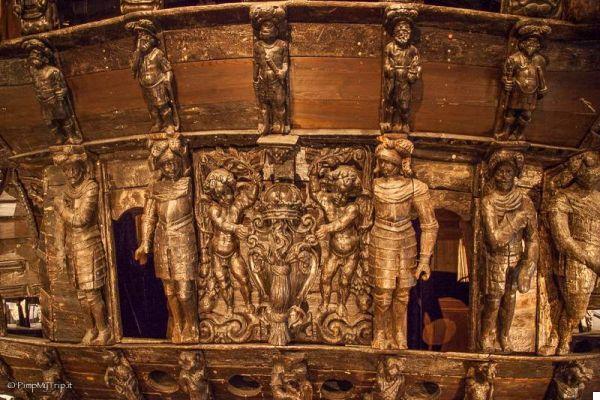 Other details of the stern

For three long years, more than 400 carpenters, joiners, workers, artists and painters worked tirelessly to give life to the Vasa. It was a royal vessel, the one that was to become the most important ship of the entire Swedish fleet: the hull was obtained from more than a thousand oaks, the masts were more than 50 meters high, it was equipped with 64 cannons and adorned with hundreds of sculptures golden and colored.

The vessel immediately aroused admiration in the inhabitants of the city and concern in the enemies who followed its construction from afar.

The day of the launch the weather was sunny and the wind was light. On board the vessel there were not only the sailors but also their families, wives and children who had been approved to participate in the inauguration tour of the vessel.

The Vasa dropped its moorings and began to glide smoothly into the Baltic waters. After a few minutes a strong wind rose and after resisting the first strong gust, at the second the great fighting ship gave way, leaned to one side and sank. At 1300 meters from where he started.


No mistakes were made on board. The vessel sank simply because it was unstable: the keel was too small for the hull and too heavy due to the rigs and battle equipment.

During the trial, the captain stated that the stability of the Vasa had been tested during the construction calculations. The answer to the question of what caused the disaster was that "only God could know" and no one was punished. 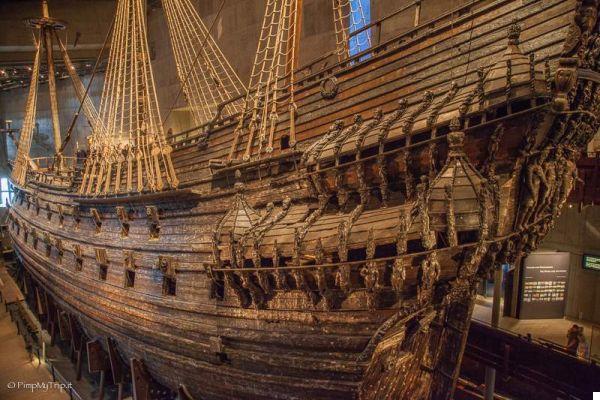 Today we know that the calculations that were made were incorrect. In those days there was simply not the right knowledge and no one had ever built a vessel of that weight and proportions: the Vasa was modeled on previously built vessels but did not have that size. Basically it was an experiment that went wrong.

What the Vasa Museum tells

What the Museum tells us today is the story of other times: here time stopped at 5 pm on 10 August 1628.

When the vessel was resurfaced 333 years later, the bodies of the sailors were still wearing their clothes, small personal items and a few bronze coins. In the hold the barrels were still full of provisions, the admiral's table was still standing in his cabin, the kitchen set, the bronze candle holders, the lamps and even the ship's cat were still on board.

The Vasa is a time machine that witnessed for us what life was like on a ship during the 1700s, thanks to the objects found inside the vessel. 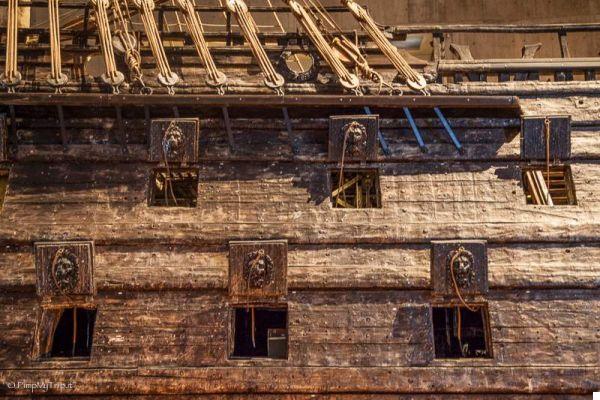 The two rows of guns, 64 in total, which contributed to the sinking of the vessel due to the weight

At the time it was very difficult to find someone who was willing to become part of the 145 sailors of the Vasa: the work was hard, the wages very low and the living conditions atrocious.

In fact, the sailors spent most of their time in the dark, humid and overcrowded battery deck where in the semi-darkness they had to share space with the other sailors and about 300 additional soldiers also to sleep.

All they owned were their mended linen clothes, the only protection against the damp cold that penetrated their bones, a few bronze coins, shoes and gloves.
Lack of fresh food, fruit and vegetables, and poor hygiene on board contributed to rampant diseases, for which there was only primitive cures. The only medical resource on the ship was the barber.

The food was prepared in the lowest level of the ship and was cooked in a cast iron cauldron over an open fire which contributed to an unhealthy and smoky environment.

The main diet consisted of groats and barley porridge and other dry foods such as beans, peas, salted meat, pork and fish. Each sailor had three liters of beer a day available to quench the thirst caused by too salty food: at that time on the ships two thirds of the men were sick or dying and in about two months already half the crew had been "buried at sea".

The sailors knew they had to maintain discipline otherwise they would be subjected to severe punishment. Those who refused or complained about food were put on bread and water for ten days.

The killer was tied back to back to the killer and thrown overboard.

Blasphemy or insolence towards the admiral were punished with the "keel turn". The condemned man was hoisted overboard with his head in the water and then by a rope he was dragged under the keel to the opposite side of the ship, once, twice or three times.

The biggest challenge of the Vasa 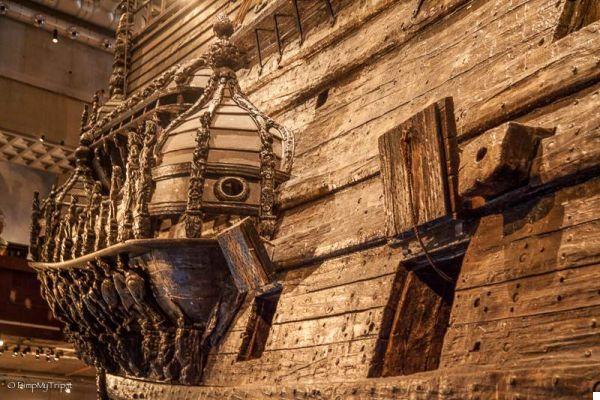 The history of the Vasa ends and begins on 10 August 1628. On September 13, 1956, the evening newspaper Expressen announced that an ancient vessel had been found near Beckholmen in central Stockholm.

It took years to organize the recovery and in April 1961 the Vasa was made to emerge from the waters of the Baltic: a pristine piece of the 17th century has seen the light again. The vessel, after being freed from the water and sand, was able to float on its own.

From that day the biggest challenge begins. The cold and not very salty waters of the Baltic have indeed saved the vessel, but since it has been recovered from the seabed the dangers are much greater.

The maintenance and care of the current Vasa goes on day by day. Due to the pollution of the port of Stockholm, the waters are very rich in sulfur which has infiltrated the wood of the vessel during its years under the surface of the water: the sulfur reacts with oxygen forming sulfuric acid which attacks the wood and today experts are constantly hired from all over the world to find a solution to this problem.

The search for long-term conservation of the Vasa continues to ensure that future visitors will be able to observe this vessel exactly as it was and exactly as I saw it.

How to get to the Vasa Museum 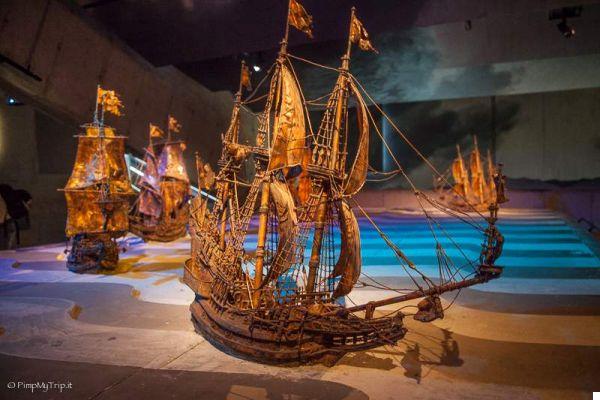 The "Baby Vasa", a model on display at the Museum of what the vessel should have looked like while sailing the sea

Il museum is located on the island of Djurgården, a destra dell'Djurgårdsbron, in Galärvarvsvägen 14.

It can be reached by tram 7, bus 44, 69 or 76 or by the ferry that leaves from Part of Slussen (old town - Gamla Stan) all year round and also from Nybroplan in summer.

Subway:
Get off at the stop Karlaplan. From there continue on foot for 10 minutes or take bus 67 to the Nordiska museet / Vasamuseet stop. 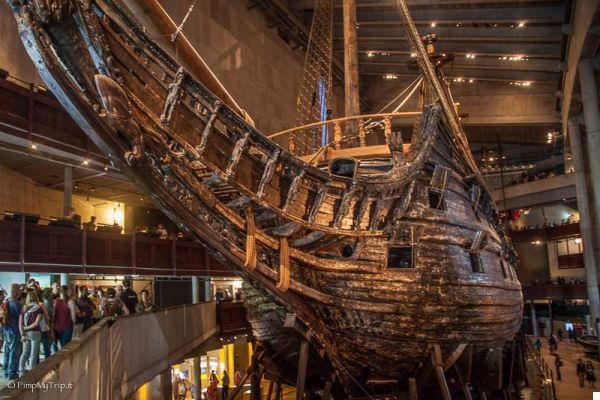 The Vasa in all its magnificence

But it doesn't stop there: if you look out the windows of the Vasa Museum you can see the exact place where it was built, where this fascinating story began and where it still continues today. The great vessel of the Swedish fleet continues to fight its battle today: the one against time.

The Vasa Museum is open every day from 10am to 17pm.

You cannot purchase your entrance ticket in advance.

6 of the Best Islands to Visit in the Stockholm Archipelago

Stockholm, What to See and 4 Really Unusual Things to Do

Visiting Stockholm for the First Time: The Information You Need