Visit Masada and the Dead Sea from Jerusalem and Tel Aviv

Masada together with the Dead Sea I'm a perfect one day trip from Jerusalem or Tel Aviv. They are located next to each other, so visiting both on the same day is easy, quick, and affordable too.

Masada is now a UNESCO World Heritage Site and one of the most popular and most visited sites in Israel. 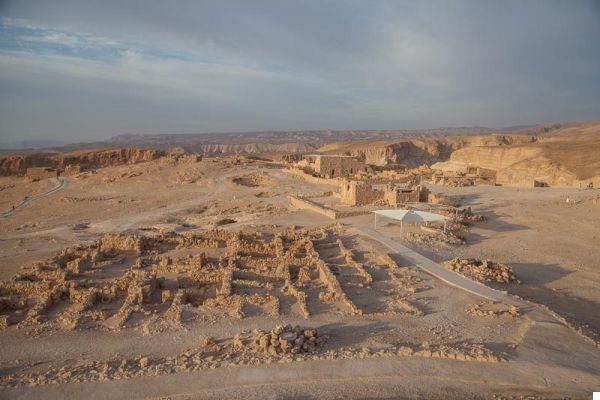 The ruins of Masada at dawn

How to get to Masada

From Jerusalem, it takes about an hour and a half by rental car to travel the approximately 100 km that separate it from Masada.

However for get to Masada there are various options: you can rent a car, hire a taxi or take the bus.

For those who don't want to rent a car or take public transport, there are plenty tour options which take travelers to Masada and the Dead Sea from Jerusalem and Tel Aviv and some of these also include the visit to the Qumran Caves.

Some tour that I recommend are these below:

get to Masada by bus from Jerusalem you can take bus 486 from the central station and from Sunday to Thursday there are 5 a day, so you won't have any problems.

On Friday and Saturday, on the other hand, since the buses are respectively feast of Muslims and Jews.

From Tel Aviv it takes 2 to 2 and a half hours to get to Masada and the Dead Sea. The best options are either to take a car or a tour: it is impossible to get there by public transport in the day, it takes too long, but it is a good option if you want to stop for a few days.

The bus from Tel Aviv to Masada and the Dead Sea is number 421.

For more details on how to get to Masada from Jerusalem and Tel Aviv, visit the TouristIsrael website.

History and Siege of Masada 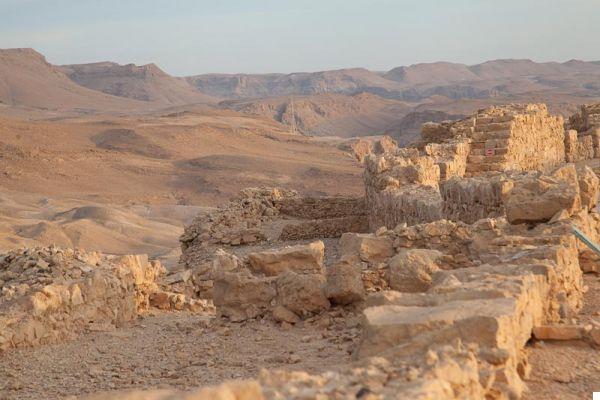 History andsiege of Masada they are really well known and very fascinating.

Who told it first was Josephus, the commander of Galilee during the Great Revolt in the first century AD, according to whom the first fort at Masada was built by "Jonathan the High Priest", although no definitive ruins have been discovered since that time. .

Since the elevated position had several advantages in defense, Herod subsequently chose it as a winter refuge and as a place of defense from enemies and built not only a real castle, but also warehouses and water cisterns.

About 100 years after Herod's death, when the great revolt of the Jews against the Romans broke out in AD 66, a group of Jewish rebels known as the hit men took refuge in Masada. After the fall of Jerusalem in 70, the Romans turned their attention to Masada. With Jerusalem in ruins, in fact, the Masada garrison was the last community that remained in Judea with 960 rebels, including many women and children.

Led by Flavius ​​Silva, a legion of 8.000 Romans built camps around the base, a siege wall and a ramp on the western side of the mountain and after 3 years without success, the Romans managed to climb over the fortress wall.


What happened remained in the memory as an act of dignity and heroism.

When it became clear that the Romans would take control of Masada on April 15, 73 AD, all but two women and five children in Masada, who hid in the cisterns and later told their stories, made the decision to commit suicide rather than fall into Roman hands and live as slaves.

When the Romans entered the fortress they found only solitude and silence. 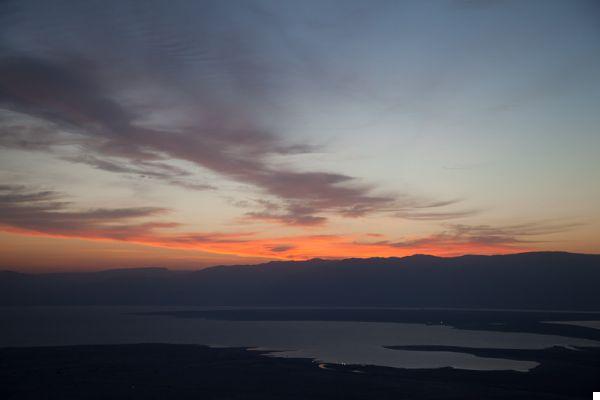 There's a visitor center at the base of Masada, but if like us you decide to climb before dawn, you will find it closed. This is where entrance tickets are purchased.

The quickest and easiest way to get to the top is by cable car, which costs NIS 76 (cable car in both directions).

For the crazy ones like us, you can instead climb on foot up to the fortress on what is called the path of the snake.

While the cable car takes visitors to the top in minutes, if you walk up it takes nearly an hour. During the summer months, expect to take longer in the heat and bring plenty of water.

The snake path climbs in a zigzag manner and is a combination of gravel and stone steps. It is tiring, especially in the midday heat, but as a reward you get the beautiful views of the Dead Sea. Of course, you would see it the same from the cable car, but you feel a certain satisfaction in reaching the top only with your own strength!


Once at the top of Masada (and after a short break in the shade, if you can find any) you can start the tour among the ruins of the fortress, although certainly the best part are the views of the Dead Sea, Judea and the desert around. If you look east you will see Jordan which is on the other side of the Dead Sea.

Second option to climb Masada: you can go up the Roman ramp, a much easier option, but it is not accessible from the highway and to get there you will need to have your own car and you will have to take a detour to the western side of Masada.

Climb up to Masada just before sunrise it is the most popular and famous way to get to the fortress while in Israel. There are tours available from Jerusalem and Tel Aviv, to reach the Masada base before the sun rises.

If you have the right timing and you walk at a good pace, you will arrive like me at the top of Masada in time to see the sunrise over the Dead Sea. A grind, but believe me it's worth it.

The visit of the ruins, however, does not take more than a couple of hours unless you are like my mother who reads the story of every stone she finds everywhere. 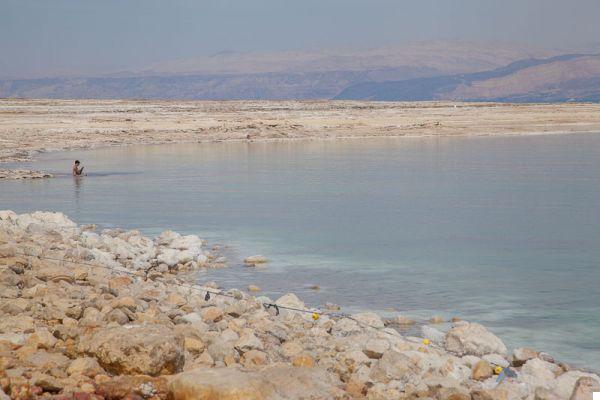 Mud bath in the Dead Sea

Il Dead Sea it is the lowest point on earth at -425 m below sea level. The water is nearly ten times saltier than that of the ocean. The water has an oily appearance and coats the skin with a salty film.

There are several ways to get to the Dead Sea. Israel is on the western side of it, because the other side belongs to Jordan.

There are public beaches and resorts in which to spend a few hours and experience the beauty of swimming floating like a piece of cork, to get mud baths and to buy the famous beauty products sold everywhere.

From Masada, it's about a 20 to 30 minute drive south to reach the free beach Ein-Bokek. There are free changing rooms and showers. For those who just want to take a quick dip in the Dead Sea, this is the easiest (and cheapest) place to go.

For those who have more time my advice is to consider going to Ein Gedi, a very beautiful natural oasis located in a famous Kibbutz, within which a series of paths develop. The further you go inside, the calmer you will find and the more likely you will be able to find your little oasis of peace and serenity. 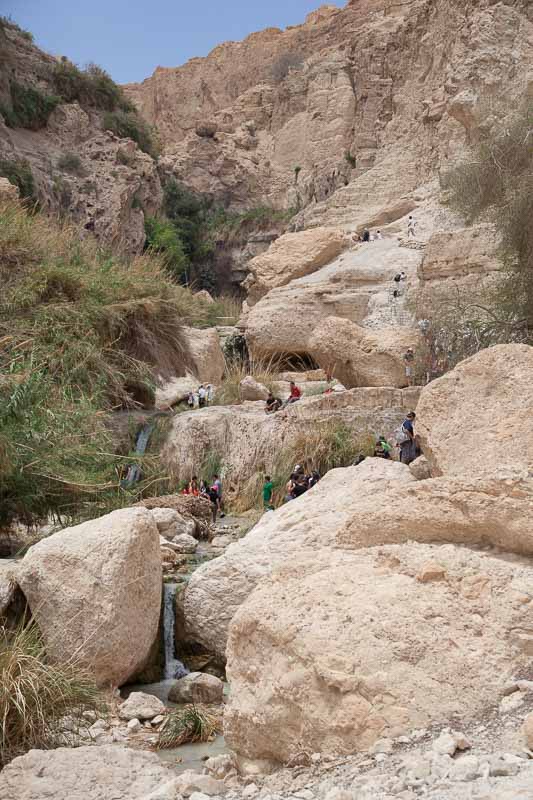 The oasis of Ein Gedi climbing towards the David waterfall

Ein Gedi also has a public beach and spa that is much closer to Jerusalem than most beaches if you have less time. Another option is Mineral Beach, one of the best places to “wear” the mud of the Dead Sea and then immerse yourself in the water.

Other beaches and locations to go to on the Dead Sea are Kalia Beach, about 25 minutes from Jerusalem, which offers a spa with a bar, restaurant and shop where you can buy Dead Sea salts, or Biankini Beach, just south of Kalia, which is a Moroccan-style oasis you will love or hate, depends on taste. 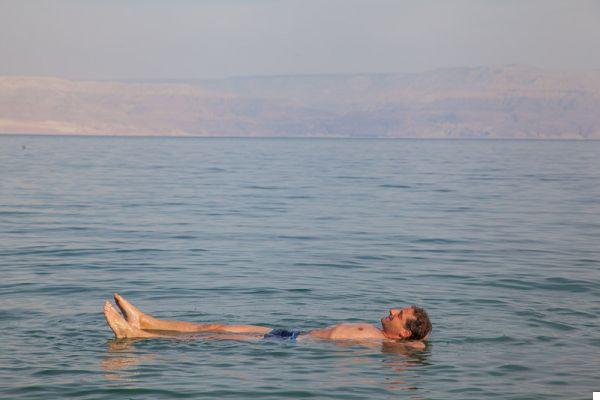 To bathe it is definitely better to go to an establishment. In fact, each of them offers changing rooms and showers absolutely necessary after a swim in the saltiest sea imaginable.

When you go to the beach pay attention to the guidelines which will be given to you and which are generally written on signs at the entrance. The high salinity actually has "cons" to watch out for.

You will also find mud baths, you will find them practically everywhere under your feet or in special pools.

Some of the best spas and resorts you can find them here and almost all of them offer both daily entry and the opportunity to spend a few days:

Isrotel Dead Sea Hotel: one of the 5 star spa style hotels. Located near the shores of the Dead Sea with its own private beach, the hotel boasts beautiful modern furnishings. L'Isrotel Dead Sea has extensive spa facilities including a sulphurous pool, massages, private solarium, sauna and steam room.

Kibbutz Ein Gedi: one of the most popular places to stay on the Dead Sea is not a super-luxury hotel, but the beautiful setting, just minutes from the beach, in this famoso kibbutz with its wonderful botanical gardens, it is incredible. The hotel is also considered to be one of the best places to eat on the entire Dead Sea!

Hamidbar Dead Sea Hotel: one of the oldest and most traditional hotels in the Dead Sea and is very popular especially among Israelis.

Some tips for bathing in the Dead Sea 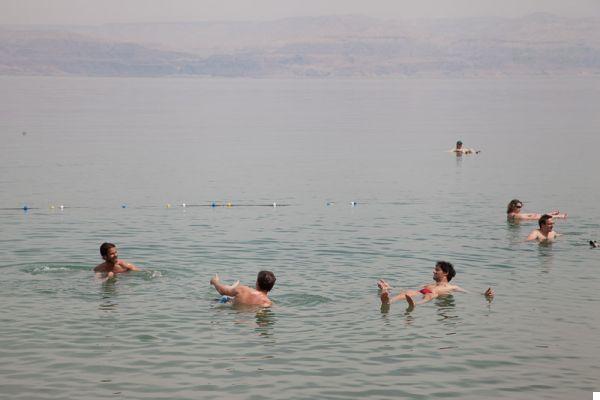 Bathing in the Dead Sea is fun but you have to pay some attention ...

Visiting Murano from Venice: How to Get There and What to See ❯

5 Ways to Book a Hotel in Iran, with Pros and Cons

How to get a visa for Iran