It is now clear that the best things come about by chance, but if you still have doubts, our visit to Palangan, in Iranian Kurdistan it is the absolute confirmation of this.
When we left for the trip to Iran, we had absolutely not taken into consideration this little pearl, set on a steep rocky wall in a narrow and rugged gorge, hidden and protected in the high mountains of Kurdistan: despite the fact that I still had in my eyes the image of a photo seen on National Geographic some long before leaving, the fact that Palangan was so difficult to reach had reluctantly made me put it aside. 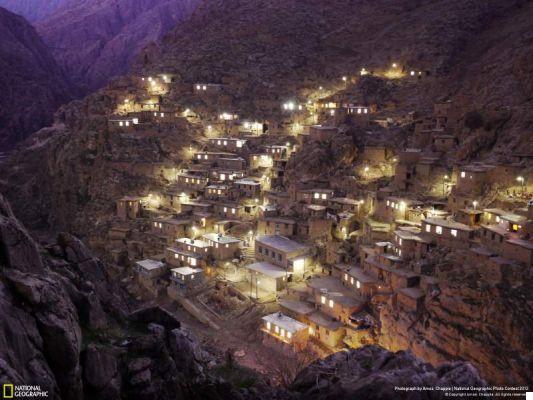 But the beauty of being gods improvisational travelers it is just that: if at some point you feel the call to a place, if you do the math on the days available and understand that there is a possibility, the only thing you have to do is to buy a bus ticket and to go.

Our desert trekking guide had already strongly advised me to visit Kurdistan, but it was a large map of Iran that made me aware that yes, it could be done as long as you give up something from the original itinerary: Kashan. From Esfahan we buy the ticket for the night bus for Sanandaj from which Palangan by car is less than a couple of hours and which is therefore the ideal base for visiting it. 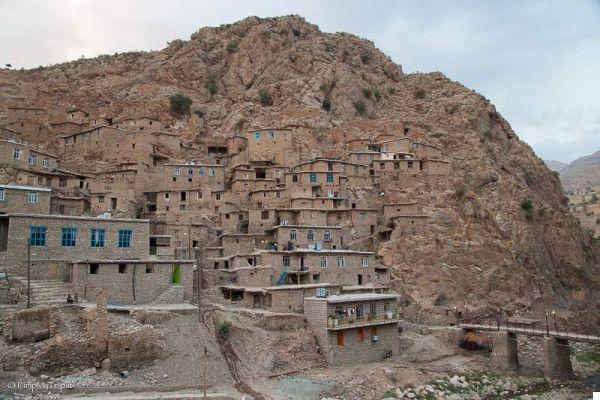 In Kurdistan only young children speak English so the first hours in the city are a nightmare: without money and with all the writing in Kurdish we just didn't know where to turn.
They are a series of lucky encounters and coincidences that lead us to know Golale, who promises us to find us a driver for the following day: it is possible to get to Palangan by public transport but there are no direct buses so between changes and dead times it takes a day to make the journey that takes less than two hours by car.
And our choice will turn out to be one of the best of the whole trip, since the driver that Golale found us is his brother Mehran that in just over two days he will become a friend, he will take us to his house to stay with his family, he will make us attend a real traditional wedding and thanks to which I now feel Iran as my second home. 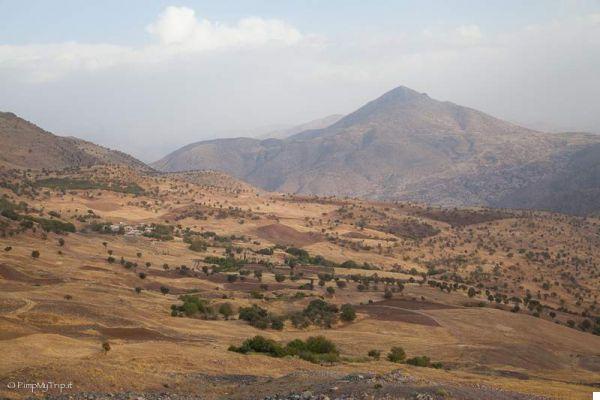 Indeed, the original idea that Golale had suggested to us was to skip Palangan in favor of Oraman and Zarivar lake, but at the end of the day Mehran understands the intensity of my desire for the small town and instead of taking us back to the hotel as we had agreed, he asks us if we want to take a detour: my heart beats fast when, already evening is falling, we arrive in the narrow gorge and we are faced with something that you really can't imagine until you see it.
The first glance at Palangan is one of pure disbelief: here time has simply stopped. 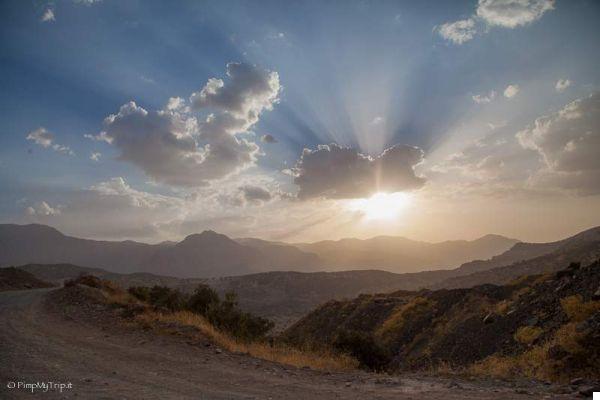 Let's take a quick tour, the idea is to go back to Sanandaj for dinner, when Mehran looking at me compassionately asks me if we want to stop for the night. It doesn't even seem real to me: I look at Massi who tells me that a soft bed, a nice shower and a lavish dinner are waiting for us in Sanandaj, but then he understands the plea in my eyes and can't say no to me. So Mehran finds a house for us at 10 USD, there is nothing inside, not even the bed: you sleep on the floor with blankets, the bathroom is outside and the smell of goats coming in through the window-hole. with us, in the courtyard: despite the obvious inconveniences, my enthusiasm is skyrocketing.
It does not seem true to me, we are projected into the past: a rural past, made up of ancient things, where only electricity is proof of the XNUMXst century, where people and animals still live with the rhythms of the seasons and the cyclical alternation of days and nights. 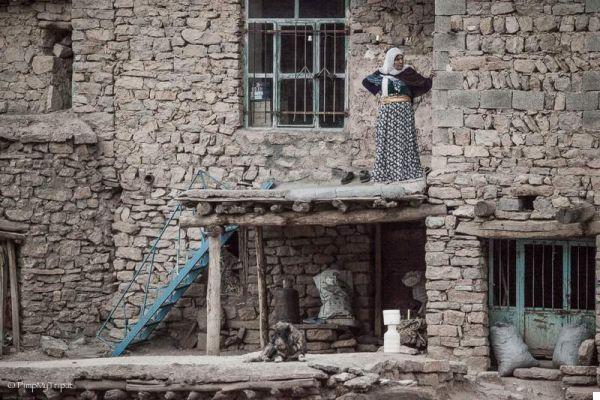 Pictures of life in Palangan

We sit under a tent that functions as the village's restaurant, bar and supermarket and order chai and ghelyoons for us. Word spreads that foreigners have arrived in the village, people look at us curiously, someone tries to ask us some questions, clearly in Kurdish and Mehran takes the trouble to be a translator.

The kids here love it for two reasons: football and the fact that it accepts refugees. In Palangan, as in all countries (more than 5000) scattered around Kurdistan, young people are finding it increasingly difficult to find a job; I feel embarrassed when with hopeful eyes they ask me how to get refugee status and I don't know what to answer. 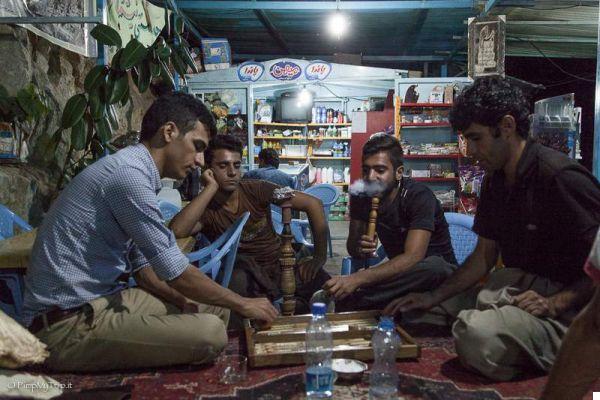 In Palangan, time passes between a ghelyoon and a game of backgammon

Dinner is in the same place: in Palangan life takes place around this tent with a few tables which is the center and fulcrum of social life. We are served grilled fish, I am satisfied with the usual yogurt with garlic that has now become the main food of my forced Iranian diet: vegetarian dishes in Iran are reduced to a few salads and a few other things. 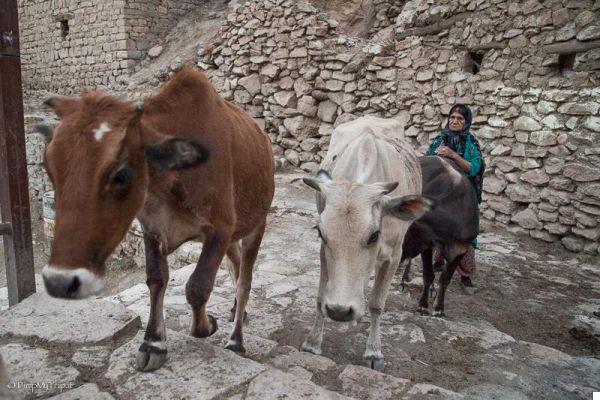 Time passes slowly here, slowly we observe the village getting ready for the night: with the twilight the animals have all been brought back from the pastures to the pens and stables, the women have finished their chores, all return home for dinner, the the narrow streets of the town are deserted, the lights from the windows of the stone houses make the landscape magical as in a nativity scene, the silence is almost unreal.
In Palangan, when it gets dark, women do not go out: married ones are at home with their husbands while young girls are not good for being seen around; in the bar I am the only female present and the guys are really intrigued by me, they ask me lots of questions, about girls, why I don't wear jewels, while time passes by smoking gheyloon, drinking chai and playing backgammon: this is the main pastime , not to mention the only one. Night also falls on Palangan and it's time to go to sleep. 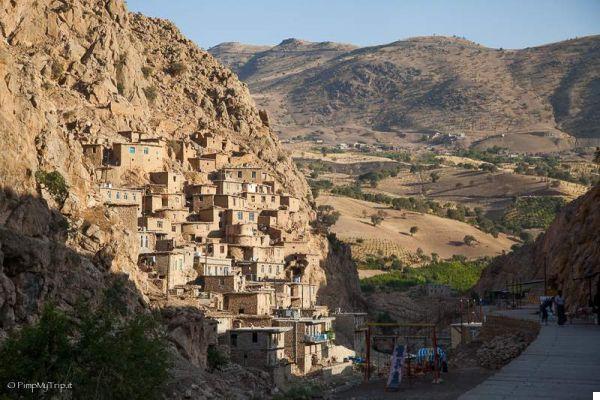 Palangan at the first light of the morning

In the morning it is not the alarm clock that pulls me out of bed (so to speak since the night is spent sleeping on the floor) but it is the lively rooster, the bleating of the sheep under my window and the sun knocking heavily from the hole- window. I get dressed quickly, I want to go out and enjoy the country and its people for a couple of hours. The villages are extremely interesting in the morning as people go about their business and it is a great opportunity to take good pictures. In this case, however, I don't photograph much, I'm more interested in people and what they have to tell me.
Before leaving we also find time for a walk towards the gorge that opens behind Palangan, as I walk I think I will miss this place very much because I have not lived it enough yet: I would like to stop, to talk to people again , to spy inside their houses from behind every door and window, to learn their life made up of more than simple things, things that make you rethink all those uselessness that we are convinced we can no longer do without.
I take a few more pictures while I promise myself to come back and bring the prints of their photographs to people, I think they would be delighted. 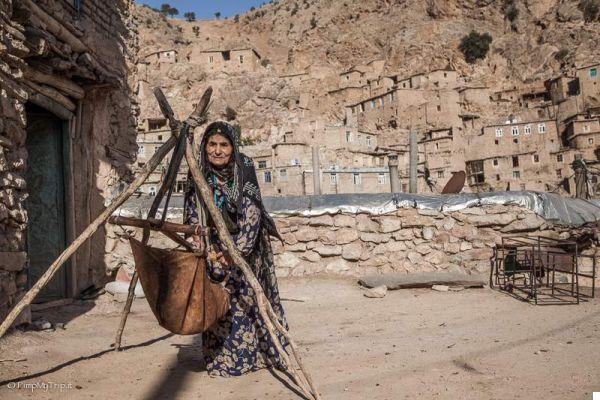 We salute Palangan in silence, with his images of life still clear in our eyes: we leave taking with us that breath of rare novelty in these parts and each of those who previously spoke to us with enthusiasm slowly returns to his things: the woman who milks her cows, the child with his donkey, the old woman with yogurt. I hold my camera tightly and with great emotion, the photos that are imprinted on it are what I take away from a real life still lived in a way that I thought no longer existed anywhere in the world. I don't think it will happen to me very soon to take similar ones.

Parc Güell, What to See and 5 Ways to Skip the Line ❯

When to go to Iran, Best Month, Weather, Climate, Time

add a comment of Palangan, c'era una volta… in Kurdistan