What to see in Marrakech, when to go and how to get there

Marrakech is the most visited city of Marocco. Here you will find crowds of tourists, and sometimes you will feel a little overwhelmed if you are in rush hour in the most visited places, so planning your visit well will help you to taste the real Marrakech. If you are planning to visit this city, below you will find some tips on what to see in Marrakech, the main attractions not to be missed.

The ancient and magical Marrakech, full of palaces, mosques, markets and gardens, is one of those cities not to be missed. Its Medina surrounded by a great wall and entrance doors, is spectacular, and staying in one of its riads is the best you can do to enjoy the authentic essence of the city.

What to see in Marrakech

The city of Marrakech contains the modern soul of Morocco, the most interesting sites and museums in the country and the liveliest of all the medinas, whose intensity can amaze the tourist. We have compiled a list of what we believe are the main places to see in Marrakech.

The Medina and its Souk 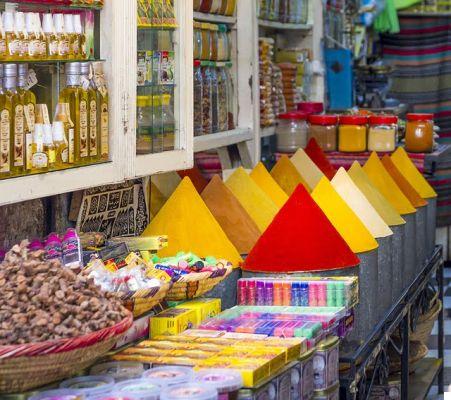 Souk in Marrakech - Image from Pixabay

In Arab-influenced countries, the oldest part of the city is called the medina, but before the more modern suburbs developed, this part made up the entire city.

The medina of Marrakech, that is World Heritage Site by UNESCO since 1985, it has an area of ​​about 600 hectares with about 28.000 houses in which 20% of the city's population lives.

It is surrounded by a 19-kilometer wall and the walls, built with a reddish clay, change hues as the sun shifts throughout the day. It has 10 impressive entrance doors, among which the one stands out Gate Bab Agnaou from the 12th century, with bas-reliefs and green colors. Other interesting doors are that of Bab el Robb, Bab Doukkala, Bab el Debbagh, Bab el Jadid e Bab el Khemis.

The Medina of Marrakech is large, and can be very confusing, with winding covered streets, narrow dead-end alleys, and hundreds of side streets that no car can drive.

Part of the fun can be discovering the Medina on your own and getting lost in its narrow streets, but it can also get stressful, so if you don't feel safe it's best to rely on one local guide.

Inside the Medina you will encounter the famous red city souk district, located in the heart of the Medina, north of Jemaa al-Fnaa and a five minute walk from Riad Dar Habiba, Riad Cinnamon, Papillon e Riad Star.

The souks of Marrakech are the largest that can be found in all of Morocco and it is astonishing to think that during the last thousand years its shops have changed very little. Inside them you can find sweets, coffee pots, slippers, leather bags and even small magnets. Tastes, smells, colors fill the atmosphere wherever you go. 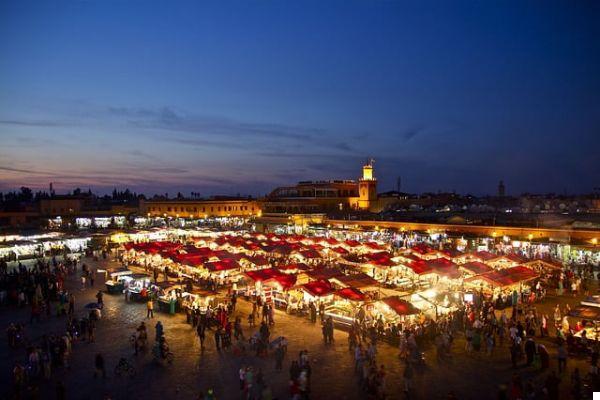 Among the best known attractions to see in Marrakech is the Jemaa el Fna square, the nerve center of the city. All the streets that cross the Medina start or end in this square.

During the day, Jemaa el Fna square is a shopping paradise, and at the same time an exciting and fun place to learn more about Moroccan culture. There are souks selling carpets, spices, metal and wood works, and various tourist trinkets.


At night the air of the streets is filled with the smells of the delicious specialties sold, the sounds of Moroccan music, snake charmers, fortune tellers and monkeys transform the square into a medieval circus.

One of the best places to contemplate the imposing square from above and to enjoy a spectacular sunset is from the terrace of the Café Glacier.

The subtropical Majorelle Garden it is located in the heart of Gueliz, within the imperial city of Marrakech. It is one of the most fascinating and spectacular places within this city made of red walls. The Majorelle Garden was designed by the French artist Jacques Majorelle in 1924.

Its buildings are embellished with a unique shade of cobalt blue. The garden, which covers an area of ​​12 hectares, is embellished with flowers and plants from all over the world, cacti, bamboo, aquatic plants, coconut, banana trees and multicolored bougainvillea.

Do not miss the small and well cared for Museum of Islamic Art of Marrakech, which is located inside the garden.

The Koutoubia mosque is the most emblematic religious building to see in Marrakech. It was built by the Almohad in 1162, near the former booksellers souk, hence the nickname of Koutoubia, "the booksellers mosque".

The Koutoubia mosque is located between the Medina of Marrakech and the New City 200 meters from the Jemaa el Fna square.


Its dimensions make it an extraordinary construction:

The Koutoubia mosque was used as a model for the Giralda of Seville, in Andalusia, Spain. To the west of the mosque is a pleasant garden with fountains and shady benches.

Unfortunately, the non-Muslim visitors are not allowed to visit the mosques in Morocco (with the exception of the Hassan II Mosque in Casablanca), however, its external views and gardens can be enjoyed.

The El Bahia Palace is located south of the Medina, near the Kasbah and the old Jewish quarter of Mellah and is one of the main attractions to see in Marrakech. At the time of its construction it was the most sumptuous and grand palace in Morocco.

Built in the 19th century the palace has over 160 rooms, but only about two dozen are open to the public.

Built by a father and his son, regent of the Sultan (the most powerful men in the country after the king), the palace was intended for the son's lover. Bahia means "the beautiful, the brilliant".

From 1912 during the French protectorate in Morocco, General Lyautey made it his personal place of residence and that of other officers. Fireplaces, heating and electricity have also been added.

Today, part of the palace is still used by the royal family and their staff. There isn't much furniture to see inside. Despite everything, it has a beautiful garden and is a quiet environment, probably one of the most peaceful places in the historic center of Marrakesh.

Its name means incomparable palace and this for good reason, as this palace must have been spectacular in its heyday. It is one of the main attractions to see in Marrakech. The palace took twenty-five years to build, finally being completed around 1593.

Now it's ruined, but still it's still very interesting. The recently opened rooms and prison cells are particularly noteworthy, and the large roof terrace is a great place to take pictures. The Marrakech Museum for Photography and Visual Arts is currently located on the premises of El Badi.

Built around 1565 and then rebuilt in the 16th century, it is the largest Medersa (Islamic university) in Morocco. At one time around 900 students studied the Quran there. The Medersa was in use as a religious school until 1960.

It is a beautiful example of Arab Andalusian architecture, now restored. The central patio is spectacular with an incredible iron lamp, arches and walls decorated with tiles and walls covered in handcrafted cedar, stucco and marble panels.

Visitors are allowed to walk freely throughout the building, including the old student rooms. Visiting hours: every day from 8: 00 to 18: 00.

Finding the Saadian Tombs in the Medina is a bit tricky, so don't be surprised to learn that these 1917th-century tombs were only found in XNUMX.

They are one of the most visited places in Marrakech. They are located on the right side of the Moulay El Yazid mosque, near the large Bab Agnaou gate.

Il mausoleum is the most important building of the Saadian Tombs and it is here that the Sultan Ahmad al-Mansur and members of his family. The Hall of the Twelve Columns is the most beautiful place, with its twelve white marble columns holding up a hand-made cedar wood dome, a true marvel.

The other two adjoining rooms are smaller and less decorated, but of course, they are worth a visit. In the gardens, on the other hand, there are the tombs of servants and soldiers.

The Mellah of Marrakech refers to the area where the Jewish community resided. In cities throughout Morocco, the Mellahs flourished and became small towns within cities.

Mellah is one of the less visited areas of the Medina, but one of the most interesting. At its peak in the 1500s, the area included bakers, jewelers, tailors, sugar traders, artisans, open-air markets, fountains and synagogues.

Today most of the Jewish presence has disappeared but one can still see the shop fronts and large bazaars. Its streets are not full of shops like those in the Souk, but there are good markets and prices are cheaper than the rest of the Medina.

For the price of 10 dirhams per person you can be allowed to enter one of the many colorful tanneries that are located outside the medina of Marrakech. The smell is very strong but it is part of the journey. Tanneries are used for leather processing. At the end of the treatments, a clean and smooth skin is obtained, perfect for making bags, jackets and much more. The resulting quality is quite good.

Marrakech is a great destination all year round. The best times to visit the city are during spring and autumn, when the days are nice but not excessively hot.

During the summer the thermometer can reach 40 ° C, while in the winter it can happen some cool or rainy days.

Marrakech is easily accessible with numerous low cost and scheduled flights departing daily. There are many airports that have direct flights to Marrakech

From other airports you can reach Marrakech with a stopover.

In our opinion the best places to stay in Marrakech are riads, small and ancient Arab palaces with an internal courtyard used as a hotel. Their architecture and decoration, the atmosphere created by the lamps, the noise of the patio fountain, the smell of plants, the roof terrace overlooking the Medina while enjoying a mint tea, will make your stay unforgettable.

Accommodation or not in one of them, you can also go for dinner in a famous riad like Dar Cherifa or visit Casa Tiskiwin, an old riad turned into a museum. Of course, we warn you that it is sometimes difficult to find your riad in the labyrinthine medina, but don't worry, there will always be someone willing to guide you. Without a doubt, riads are one of the best places to stay in Morocco. 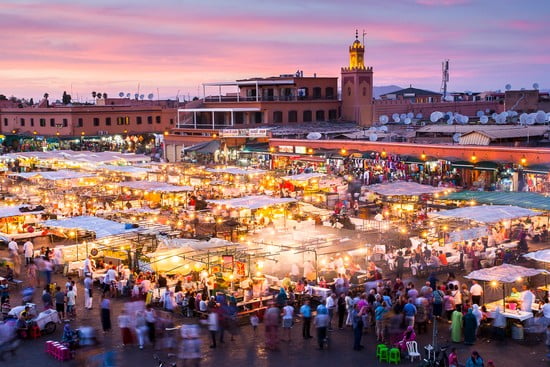 Jamaa el Fna square in Marrakesh, Morocco - Photo from Istock
What to see in New York: main attractions and places not to be missed ❯

What to do and see in Chefchaouen, Morocco

Medina of Marrakech: the 10 Best Things to See

The Best Hammams in Marrakech

add a comment of What to see in Marrakech, when to go and how to get there