If one thing is certain it is that Rome never tires. It does not matter how many times you have already been there, because every time you will be amazed: in fact, among the streets of the capital, you will always find something new to do.

Outside the classic tourist itineraries, for example, I recommend that you spend at least some time at the Jewish Ghetto of Rome. During my 3 days in Rome, among the quiet streets of the neighborhood, I spent a couple of hours among history, art and gastronomy.

The Jewish ghetto of Rome is considered among the oldest in the world (second only to that of Venice) and unfortunately it is sadly famous for the roundup of the October 16 1943.

The ghetto, however, is much more than that and personally I try in this article to satisfy your curiosity about the things to see, but if you are interested in the subject I strongly recommend that you take a guided tour with a professional guide, so that you can listen. the stories and understand much more than what you "see" or could find on the internet.

GUIDED TOUR OF THE GHETTO

Where is it and Map of the Ghetto

The Jewish Ghetto (which it would actually be more correct to call Rione Sant'Angelo) is located between the Tiber and the Capitol.

Find below the ghetto map: 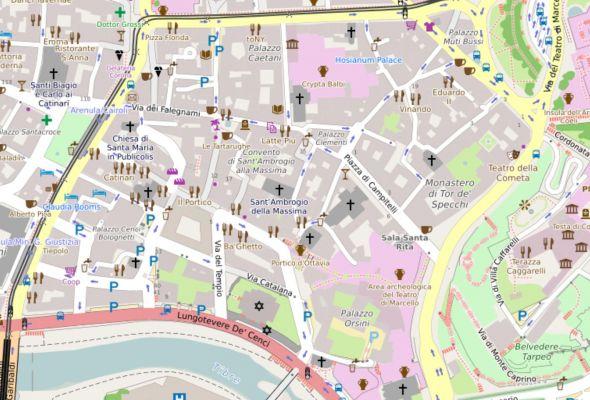 There are several restaurants in the Jewish quarter, but if I can recommend one this is definitely it RENATO AL GHETTO (Via del Portico d'Ottavia 5/6, 00186).

The place is not huge, but in the summer it "expands" with outdoor tables.

The menu includes Jewish-Roman specialties, a clear sign of the millennial presence in Rome of the Jewish tradition.

These dishes derive from a traditional cuisine with a mainly family character, handed down over the centuries, including the Artichoke alla Giudia fried in boiling oil, which is definitely worth trying.

Don't miss the courgette flower stuffed with cod and lamb!

If you really want sleeping inside the Jewish ghetto, you have to look at theHT6 Hotel Roma which I believe is the only one 50 meters from the Synagogue. It is about a very popular 4 star hotel with travelers, for this reason, if you decide to stay here, you should book in advance!


Alternatively, not far from the ghetto you will find many hotels located in or near Navona Square.

2 - Origins and history of the Jewish Ghetto of Rome 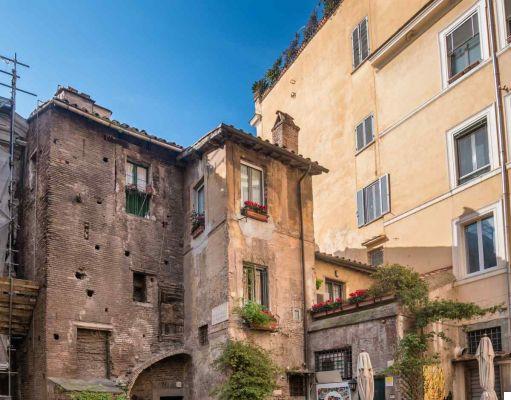 Il Jewish Ghetto of Rome it is among the first in the world to have been established and was built about 40 years after that of Venice (considered the first ever).

Its history begins in 1555, when Pope Paul IV revoked the rights of Roman Jews and ordered the construction of the ghetto. This arose in the area of ​​the Sant'Angelo district, near the Teatro Marcello.

The ghetto initially had only two entrances whose doors were closed from dusk to dawn. With the passing of the years and with the increase of the population, the accesses increased to eight.

The Jews, now confined, were obliged to wear a sign of recognition, they could not engage in trade other than the sale of used fabrics and clothes, and they had no right to own real estate.

In the course of history, the ghetto was abandoned and re-established several times until 1870. With the annexation of Rome to the Kingdom of Italy, in fact, the Jews were finally equated with the rest of the Italians.

In 1888 part of the ghetto was destroyed to create new streets, but many Jews decided to stay and live in the neighborhood.


Here, in 1904, the Tempio Maggiore, the synagogue, was inaugurated.

The events of the ghetto are sadly intertwined with more recent history.
Il October 16 1943in fact, the Nazis carried out a large round-up throughout the city which had the Jewish quarter as its epicenter.

From here, more than 1000 people were deported who were loaded into a convoy and transported to Auschwitz.

Of these only 16 managed to survive.

In the past, the ghetto was an area where conditions were very poor. However, after the walls were torn down, most of the old quarter was also demolished.

The buildings were in poor condition and the living conditions were very poor indeed. The bright and lively neighborhood you will see is not what it was when the area was a real ghetto. In fact, most of the buildings date back to the end of the XNUMXth century.

Today the Jewish quarter, from an ancient place of separation and discrimination, has become a lively and characteristic area, but at the same time also an oasis of peace in the city that I strongly recommend you visit.

3 - What to see in the Jewish Ghetto of Rome 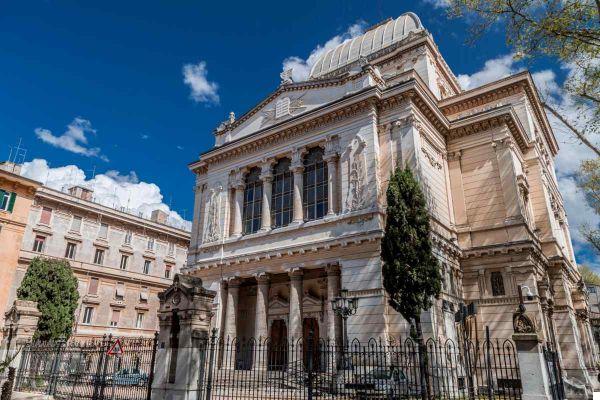 Below I will suggest you what to see in the Jewish Ghetto of Rome recommending some stops not to be missed in what is one of the most interesting districts of the capital.

The first suggestion I want to give you is to reach the area passing through Trastevere and crossing theTiber Island: in this way, in fact, you can stroll and enjoy an authentic and suggestive area of ​​Rome arriving in the Ghetto directly with a glance on the imposing Synagogue.

4 - Synagogue and the Jewish Museum of Rome

The first stop to better visit the Jewish Ghetto of Rome is the Synagogue (o Major Temple).

This is still considered today by the Jews of the city not only as a place of prayer, but as a real cultural and social reference for the community.

The Tempio Maggiore is a large two-storey square building surmounted by a large dome. His eclectic style incorporates Assyrian, Egyptian and Greek elements in a modern key and wants to be a reminder of ancient Palestine.

The Synagogue is certainly one of the most interesting monuments in the neighborhood and the interesting one is located in its basement Jewish Museum and the Spanish Temple, a small synagogue that is worth a visit.

The museum itinerary develops along 8 thematic areas that trace the history of the Jewish community of Rome over the centuries.

5 - Church of Sant'Angelo in Pescheria

The Jewish Ghetto, in addition to the Synagogue, also hosts numerous Catholic churches that are very interesting to visit.

Among these there is certainly the Church of Sant'Angelo in Pescheria which owes its name to the fact that it is located near the fish market that took place at the Portico d'Ottavia.

The peculiarity of the church lies in the fact that the entrance portal is incorporated right inside the columns of the Portico d'Ottavia.

Inside I recommend you to admire the Chapel of Sant'Andrea.

Another very interesting church is that one dedicated to San Gregorio in Divina Pietà.

On the façade, in fact, you will be able to read an inscription in Latin and Hebrew that admonished the Jews of the ghetto, reproaching them for misconduct and too much perseverance in pursuing their faith.

The Church of San Gregorio in Divina Pietà, in fact, was for a long time one of the places where the ghetto population was forced to attend Christian celebrations every Saturday. It seems that during the sermons the Jews used wax caps to not hear the words.

These forced preachings were also held in the nearby Church of the Holy Trinity of the Pilgrims.

Among the suggestions on what to see in the Jewish Ghetto there is also the Portico d'Ottavia of which I also mentioned a few lines above.

These are the monumental remains of a complex dating back to ancient Rome. Here once stood temples dedicated to Juno Regina and Giove Statore, two libraries and a space for public meetings.

Later the space was used to house the fish market.

From the Portico d'Ottavia you can access directly the Marcello Theater, dating back to ancient Rome.

The project began with Caesar, but the works were resumed and finished during the reign of Augustus. Inside it could accommodate from 15.000 to 20.000 spectators.

In the Middle Ages it was transformed into a fortress and in the sixteenth century it became a real palace (still visible today).

9 - Fountain of the Turtles 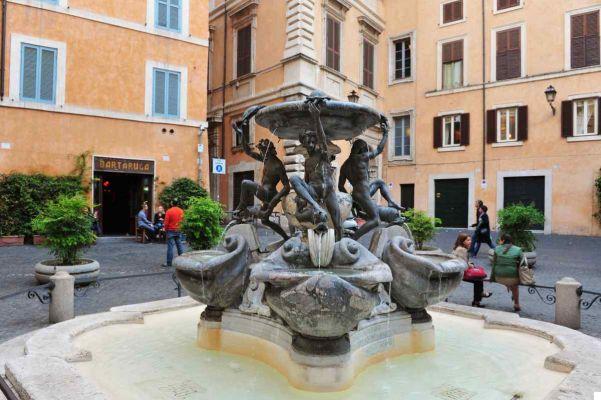 Another stop not to be missed in the Jewish Ghetto of Rome is the Fontana delle tartarughe, one of the most beautiful in the city.

The fountain was built between 1581 and 1588 and depicts four ephebes who, placing their foot on a dolphin whose tail they hold in their hand, seem to push four turtles over the edge of the pool with their free hand to make them water.

Legend has it that Duke Mattei, owner of one of the buildings overlooking the square, wanted to surprise his beloved's father by having a fountain built in one night. The man, in fact, considered him a penniless and would never allow the marriage.

At dawn the duke asked the woman to look out with her father to admire the work: the parent, amazed, agreed to the wedding. The duke, however, from that moment had the window bricked up so that no one could admire the fountain anymore (and even today that window appears to be bricked up).

Finally, during your walk in the Jewish Ghetto in Rome, pay attention to the stumbling blocks, brass plates the size of a cobblestone that commemorate the victims of Nazism and Fascism.

A discreet but powerful and exciting warning.

11 - Tips for visiting the Jewish Ghetto of Rome

I told you what to see in the Jewish Ghetto of Rome, but before concluding the article I want to give you some final suggestions to enjoy this neighborhood to the fullest.

To visit the Ghetto of Rome in a complete way and to get to know its history in depth, take part in a guided tour.

The visit is very complete and will lead you to the discovery of Trastevere and, crossing the Tiber Island, will accompany you in the Jewish quarter among the most interesting buildings and its most important symbols.

During a visit to the Jewish Ghetto you cannot miss one greedy stop. Here, in fact, you can taste some of the most delicious dishes of traditional Jewish-Roman cuisine: enjoy an anchovy and envy pie, fish broth, Giudia artichokes and cod fillets, but don't miss the opportunity to taste at least one sweet of the typical koscher pastry like the Mishmarà.

What to see (and what not) on a trip to Ecuador ❯