Capital of the Republic of Austria and one of the most visited cities in Europe, Vienna owes much of its charm and rich history to its stunning location on the banks of the Danube. There are many places to see in Vienna, the imperial capital of classical music and one of the most beautiful cities in Europe. For centuries the city was the gateway between Western and Eastern Europe and the center of the Habsburg Empire, which was very extensive in those times.

Vienna is Austria's most important commercial and cultural center, attracting visitors with its many historical monuments, fabulous art collections, glittering palaces and exceptional musical heritage that is still present in the concert halls. With a refined old architecture, its carriages and its splendid cafes where delicious Viennese pastries and pastries are served, Vienna retains an unmistakable charm and style.

Whether you are looking for places to visit in Vienna for one day or things to do over several days, you will have many choices in this elegant city.

What to see in Vienna 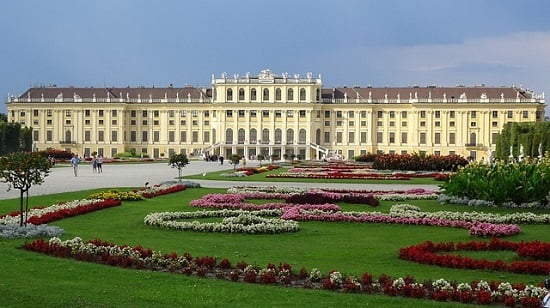 Schönbrunn Palace was there summer residence of the famous empress Sissí and it is one of the most beautiful places to see in Vienna and Austria. It is our favorite palace, particularly for its huge and well-kept gardens, where a beautiful garden of labyrinths.

The visit inside is done with an audio guide and flows between huge luxuriously decorated rooms and rooms with the objects of the former imperial family.

Schönbrunn Palace is located about 8 kilometers from the center, but is easily accessible by underground, tram or bus.

Visiting hours: every day from 8:30 to 17:30. From July to August it closes at 18pm.
Entrance included in Vienna Pass. 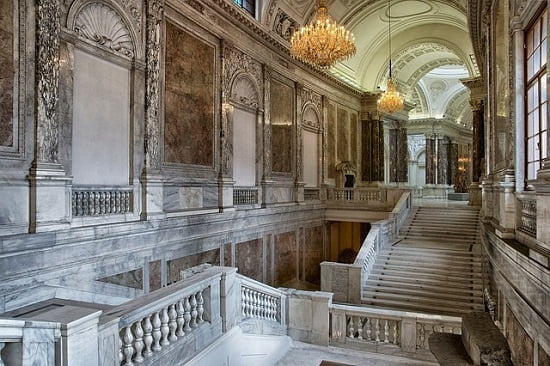 If there is one thing to do in Vienna it is to visit the Hofburg Palace. This is the imperial palace in Vienna. AND one of the largest palaces in the world and the largest in the city! Until the end of the First World War, 1918, it was the residence of the emperors, the place where everything was decided.

The Hofburg dates back to 1220 but some parts are more recent. The palace owes its large size and architectural diversity to the contribution of each of its emperors: new sections have been added over the centuries such as the Baroque Leopold wing, the XNUMXth century Chancery wing and Burgkapelle (Royal Chapel).

This extraordinary complex of buildings that is divided into 18 wings and 19 courtyards, houses in addition to the offices of the Austrian president also various cultural institutions, including the Spanish riding school and Austrian National Library. At the center of the building are the Sissi Museum and the imperial apartments.

Hofburg Palace is one of the most visited places in Austria, so don't forget to buy one skip-the-line ticket which allows you not to waste time in line. 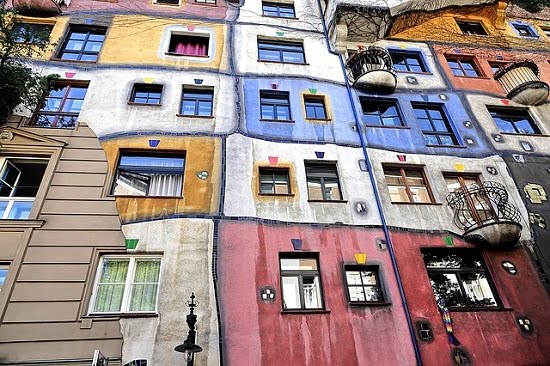 One of the most beautiful places to see in Vienna is the Hundertwasser house of the artist Friedensreich Hundertwasser, located at 34-38 Kegelgasse. Particularly inspired by the works of Antoni Gaudi, the Hundertwasserhaus is a true explosion of colors and artistic details. The colorful facades with irregular shapes are a real marvel.

On the ground floor it is possible to visit a shopping center with wavy shapes of the same style, where it is also possible to go shopping and buy some souvenirs.
It is recommended to visit it when going to the Prater, as it is close by.

The Austrian National Library is one of the most beautiful libraries in the world and one of the best things to see in Vienna. This XNUMXth century Baroque-style library located next to the Hofburg Palace, it contains over 8 million documents, including ancient books, maps and papyri from the House of Habsburg.

Its great imperial hall stands out, surrounded by high wooden shelves filled with books and also statues, frescoes and ancient globes of the world. It is definitely one of the must-see places to see in Vienna.

Visiting hours: every day from 10am to 18pm and Thursday until 21pm.

The MuseumsQuartier is a large museum complex in Vienna, visited by over three million people every year.

This complex is one of the most ambitious cultural spaces in the world and covers over 60.000 square meters of exhibition space. There is a remarkable collection of museums, cafes, restaurants and bars, some of which were built in the old royal stables.


The area is very popular, so avoid queuing up by booking your ticket online.

È one of the most famous and most eclectic markets in Vienna. Here you will find a mix of colors and flavors, beautiful flower stalls, a wide choice of local culinary specialties, fruit, spices, but also clothing and much more.

The market is open from Monday to Saturday. On the weekend, the place is very lively. All around the market, there are beautiful buildings.

The Belvedere Palace is another of Vienna's great imperial palaces. This Baroque-style palace consists of two buildings, the Upper Belvedere and the Lower Belvedere. Built in the eighteenth century as the summer residence of Prince Eugene of Savoy, the Belvedere Palace stands out for its splendid three-level gardens with large fountains.

In addition to the gardens, the museum is also worth visiting Austrian Gallery Belvedere, which houses an important collection of Austrian art, with works from the Middle Ages to the present day including masterpieces such as "The Kiss" by Gustav Klimt.

The palace is a half hour walk from the center, although it can be easily reached by metro.

The Ringstrasse is a circular avenue of over 5 kilometers surrounding the historic center. Built on the spot that once marked the ancient wall that protected the city this boulevard is home to many of the most important buildings to see in Vienna.

In addition to walking the Ringstrasse on foot, you can also hop on a tram and enjoy the view of its parks and buildings such as the Opera House, the Parliament, the Museum of Fine Arts or the Hofburg Palace, among others.

The Wiener Prater is a large public park located in Leopoldstadt famous for hosting the "Wurstelprater", the oldest amusement park in the world and one of the most beautiful places to visit in Vienna.

This park from 1895 retains some of the perfectly preserved attractions of that time. There giant ferris wheel is its symbol and one of the attractions that from its 60 meters allows you to enjoy splendid views of the park and Vienna.

But the Wiener Prater is made up of more elements such as the Hauptallee (the main alley), the Krieau and the Praterstadium (Ernst Happel Stadium). It is located about 3 kilometers from the center and is easily accessible by metro.

Visiting hours: the park is always open while the high season of the "Wurstelprater" starts on March 15th and ends on October 31st. Individual attractions may have different opening hours.
Entry is free, while the individual attractions are subject to charges. The ascent to the Ferris wheel is included in the Vienna Pass.

The Karlskirche, the church of San Carlo Borromeo

The church of San Carlo Borromeo - Karlskirche in German - is one of the finest examples of 1713th-century Baroque architecture in Central Europe. This building, built between 1737 and XNUMX at the request of Emperor Charles VI, symbolizes the extinction of the plague. You will find it on Karlsplatz.

If you like classical music, know that you can see a performance of the Four Seasons by Vivaldi!

Il Gothic masterpiece of Vienna, Stephansdom, St. Stephen's Cathedral or Steffl ("Little St. Stephen") as it is locally called, symbolizes the city like no other building and is one of the must-see attractions in Vienna.

From outside the cathedral, the first thing that catches the eye is its splendid tiled roof, with its series of beams on one side and the Austrian eagle on the other. To get the most out of it, head to the north-east side of Stephansplatz. Inside the cathedral, the magnificent stone pulpit is put on display in the main nave, modeled in 1515 by an unknown craftsman.

What to see in Vienna in several days

If you are planning to visit Vienna for more than 3 or 4 days, you may have time to discover other places. Here are some ideas for further visits to or around Vienna.

How to go to Vienna?

Vienna is said to be a city where the cost of living is high. But as in all major capitals, there is always a way to travel cheap.

Don't forget to check the prices for Bratislava, which is only 1 hour away by train. Whatever the choice of route, remember to check out the Skyscanner website, which specializes in finding a flight at the best price.

How many days do you need to visit Vienna?

If you only have one day you will see very little. Vienna has several important palaces to visit and this will take time. With two days you will be able to know the main things, enter the opera and some palace. We recommend that you spend at least three days visiting Vienna in order not to miss any of the main attractions.

Where to stay in Vienna

When it comes to accommodation in Vienna, the city offers a wide choice of hostels, apartments and hotels. The best area is the city center but as with all destinations this is also the most expensive area. To know all the best neighborhoods to stay in Vienna read our dedicated article here. 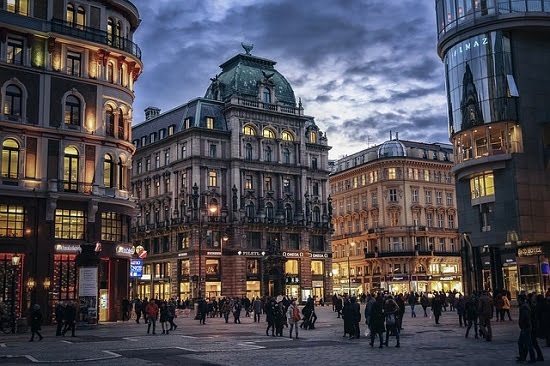 Historic Center of Vienna - Image from Pixabay
What to see in Zagreb, the capital of Croatia ❯

Where to sleep in Vienna: the best hotels and the best areas to stay

add a comment of What to see in Vienna in one, two or three days