Badia di Moscheta: Immerse yourself in nature in Tuscany

I discovered that magical place that is Abbey of Moscheta thanks to the invitation for a horse trekking on the Tuscan-Romagna Apennines on the occasion of the 3rd "Memorial Enzo Mingozzi" held every year between June and July in Palazzuolo sul Senio: an event dedicated to those who love horses, the good nature and food. 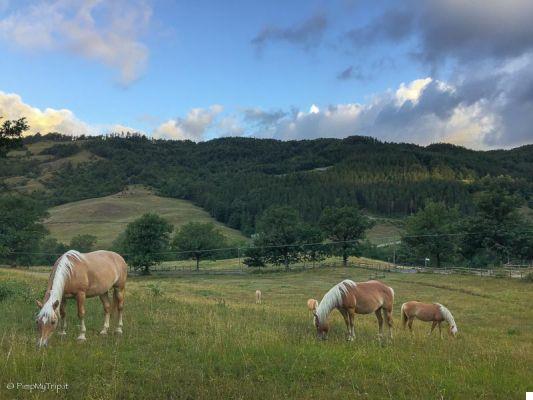 It goes without saying that I fell in love with Badia di Moscheta at first sight: you have already understood it. When it comes to authentic places surrounded by nature I can hardly fail to fall victim to their charm.

Abbey of Moscheta it is an abbey built by Benedictine monks at the beginning of the year 1000 to give refuge and a place to rest for travelers crossing the Apennines. It is located in a fairytale setting, between meadows and centuries-old chestnut woods: hence its name which derives from Mons Ischetus, that is, monte degli ischi (sweet oaks). 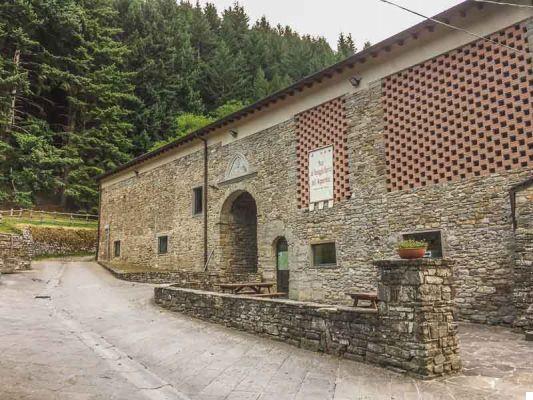 The Abbey, immersed in the nature of the Tuscan-Romagna Apennines

It seems that the founder of the Abbey, San Giovanni Gualberto he was also a cool guy who, in addition to fighting the wealth and power of the clergy of the times, was also one who worked miracles. There are many stories and legends that revolve around his figure: it seems that he had the ability to stop storms and fill sacks of grain that never emptied or to pacify the forest bears that plundered the farmers' livestock.

In short, San Giovanni Gualberto is still considered today one of the great reformers of the Church and after his death, given the close relationship he had with nature and animals, he was proclaimed patron of the foresters of Italy.

Badia di Moscheta has had a fluctuating existence that has seen periods of enormous splendor to others of total abandonment and neglect.

Built around the year XNUMX and today owned by the Tuscany Region, the Abbey at the beginning included, in addition to the complex for praying, also a hospice for the poor, gardens, stables and even a pharmacy. Some testimonies also say that the monks practiced beekeeping and produced honey knowing its healing properties and that they used to treat the sick.

Anyone who came here found hospitality, a bed and food. Pilgrims and wayfarers were hosted for 3 days: the fire crackled on day and night to give a warm refuge to anyone who needed it.

The Abbey from its foundation reached its maximum splendor in the thirteenth century and was considered one of the most prosperous abbeys in all of Tuscany.

Its decline began in the following century due to the terrible plague that also arrived here in this oasis of beauty in the midst of nature and woods. 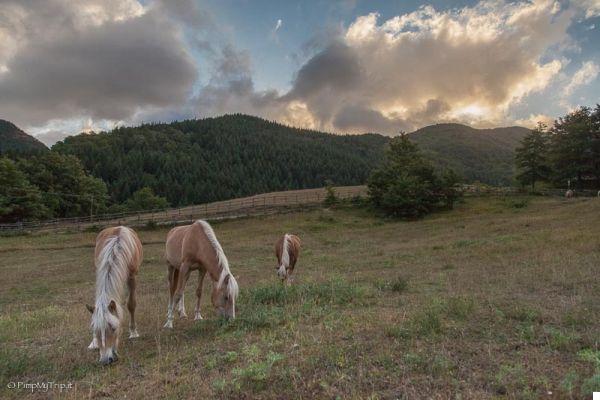 The abbot left, the abbey was abandoned at the mercy of brigands and robbers who took away almost all of its patrimony.

From the first half of the 1400s, however, Badia di Moscheta began to shine again. It was entrusted to the Commendatory Abbots, lay or religious who were entrusted with the task of taking care of the ecclesiastical properties. A flourishing period began again and the Abbey rediscovered its importance, so much so that Lorenzo the Magnificent appointed some of his most trusted men as "commendatory abbots".


In the 16th century the Abbey was again abandoned and in the mid-1700s it was sold at auction and became a farm, until at the end of the 50s it was bought by the state and became state property.

My experience in Badia di Moscheta 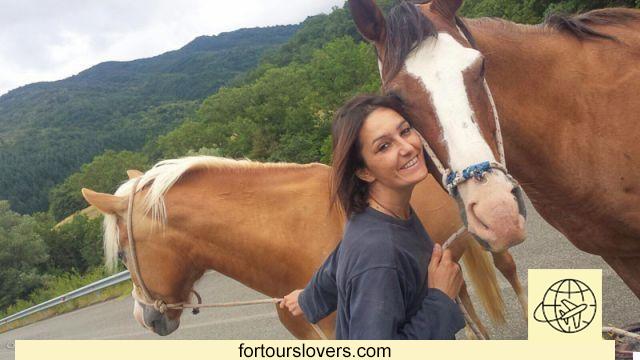 We arrive in the small town of Borgo San Lorenzo, about half an hour from Florence, during the early afternoon and we find Giovanni, the owner of the Badia di Moscheta riding school, waiting for us with his ubiquitous cowboy hat pressed deeply on his forehead.

We go quickly to have a coffee and buy the last things we will need for the packed lunch the next day during the horse trekking and then off by car to Badia di Moscheta.

When we arrive I can't help but fall in love with the Apennines at first sight: the hills are covered by a dense forest: the dark green of the trees is softened by the light and delicate green of undulating pastures where friendly Haflinger horses with their blond manes graze quietly.

They don't seem to pay too much attention to the noise of the car's engine breaking the comfortable silence that envelops the valley.

As soon as we get out of the car we are greeted by Giovanni's 5 friendly dogs: Sasso, Gandalf, Nero, Sansone and Zanna greet us with wagging tails and welcome barks. A plump red cat also appears from behind the carefully arranged geranium pots in front of the entrance to the cloister.


At the entrance to the cloister of the abbey there is a lunette with three symbols: St. Peter (to whom the Badia is dedicated) a porcupine and the sweet oak (farnia). The three symbols have a very specific meaning: they represent the world of the sacred, of plants and animals.

The symbols of the Abbey: St. Peter, the English oak and the porcupine with lowered quills

San Pietro represents the struggle against the wealth of the clergy that San Giovanni Gualberto was fighting; the English oak, that is the sweet oak, represents nature and plants: the sweet oak takes its name from its sweet acorns from which in ancient times the monks also obtained a kind of coffee.

The porcupine, which is represented with the quills lowered, represented the monks' type of humble life and peaceful coexistence. 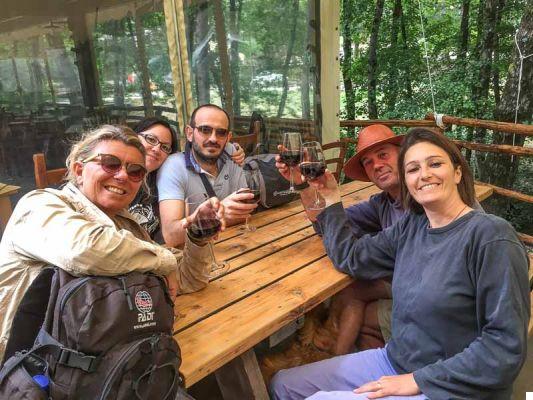 Immerse yourself in the Tuscan tradition: taste a Chianti!

Even the owners of the adjacent restaurant welcome us smiling, make us sit under the trees and uncork a bottle of red for us:

Badia di Moscheta is definitely the place to feel at home!

There is one thing that anyone who comes to Tuscany must absolutely do: taste a Chianti. And here at the Badia di Moscheta restaurant there is a whole cellar of bottles to choose from!

Despite the tiredness and the desire to run straight to my room to take a shower, I decide to postpone the rest for a few more minutes and accompany Giovanni to take the horses to the pasture for the next day's trekking. As soon as they see it, they arrive galloping down the hill, eager to receive caresses and obviously hoping for some carrots (they will be satisfied).

Dinner at the restaurant is superb: you can see that the owners do everything to maintain the culinary traditions of the area: from the famous Florentine steak, for which the restaurant is famous throughout the region, to the delicate vegetables fried in batter, to the ricotta and spinach ravioli seasoned with butter and sage.

Trays of typical Tuscan mixed cold cuts are brought as an appetizer: the “frisolona”, cured ham, salami and various cheeses.

All the products served at the Badia di Moscheta restaurant come from a radius of 100 km from the Abbey: this is to avoid pollution, help the local economy and encourage the consumption of seasonal and "local" products.

In short, even the culinary experience here is a deep immersion in local tradition.

Il restaurant menu therefore it varies according to the seasons of the year and the products that nature offers. In the "right" periods you can taste tagliatelle (strictly homemade) with mushroom sauce, while in others you could taste the DOC truffle.

Grilled meat in Tuscany is a must. Here you can taste sausages, Florentine steaks, the "Peposo" or stewed wild boar, bacon, all strictly from the meat of the agricultural cooperative of Firenzuola (CAF). 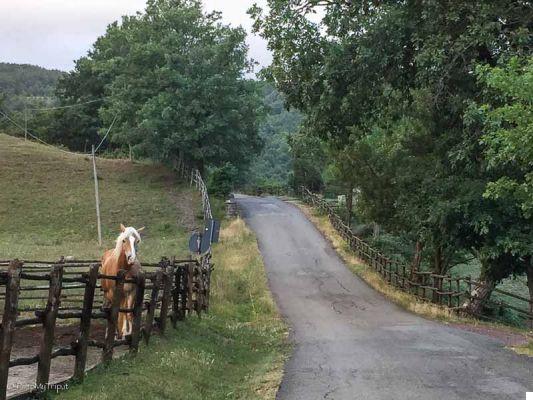 When you arrive near Badia you will immediately notice it from the undulating pastures where dozens of friendly Haflinger horses live quietly grazing the grass in total freedom.

They are the horses of Giovanni's riding school which is located right next to Badia di Moscheta and which organizes trekking for both a few hours and days through the Apennines.

All the treks are accompanied by Equestrian Environmental Guides recognized by the Tuscany Region and are suitable for practically everyone given the very docile nature of the horses.

Giovanni has been a "man of horses" all his life and knows his horses perfectly one by one. He will know immediately at first glance which horse to entrust to you.

Haflingers are super reliable horses even for beginners. They have a sure step on the trails, they are resistant horses, calm and very sweet, but when they want they can also become very lively. If a rider has experience they are the classic horses that as we say "if you look for them you will find them".

And then how can you resist their blond manes that have always been the envy of all breeders of other equine breeds and their very particular character that makes the Haflinger an unmistakable pony?

Where to sleep: the farmhouse and camping (free) 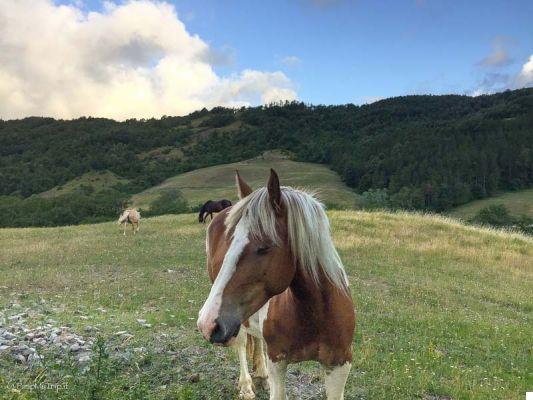 The best way to experience Badia di Moscheta is undoubtedly to spend at least a couple of nights there. This will give you time to live it intensely, taste its tasty dishes, take long walks in the woods and walks with Giovanni's horses.

Don't worry because sleeping there isn't a problem. There is a free campsite set up with bathrooms and electricity and comfortable rooms to spend the night.

I collapsed on the bed, I was dead tired and I slept like a log until the next morning. The rooms are equipped with bathroom and courtesy service. And the silence that reigns around is well that can not be explained.

How to get there

Badia di Moscheta is located in the province of Firenzuola in Tuscany.

You can arrive by car from Florence along the following roads:

add a comment of Badia di Moscheta: Immerse yourself in nature in Tuscany